Ban Tai in Phangan is a mediocre beach for those who want to stay closer to civilization and do not plan to spend most of their vacation time on the beach. It is full of cheap housing, good infrastructure, close to Tong Sala, has its own supermarket and hospital.

Ban Tai looks good in good weather, especially when viewed from afar - the pictures are fantastic. Nearby, however, not such an unambiguous beauty opens up: coarse sand with stones in the surf, broken shells, rocky bottom, shallow water, and in some places the coast is fortified from erosion by stone fences.

If the sky is overcast, the beach from a tropical paradise turns into something dull and faded. I visited Ban Tai just in the rainy season, so there are very few colors in the pictures, but in the sunny season the landscapes are much more attractive..

Ban Tai is located on the southwest side of Phangan. This is one of the longest beaches on the island, its length is about two kilometers. Although I find it difficult to say the exact length, because the edges of Ban Tai merge with Bang Kai in the south, and with Ao Ban Charu in the West. There is no clear division of the boundaries of the beaches either by geography or by infrastructure. The coast stretches in one continuous winding line, without capes and rocks.

Along the coast, along the beach, there is a road with commercial and residential buildings, occasionally interspersed with wastelands and palm groves. You can leave Tong Sala and skip half of Ban Tai without noticing where Tong Sala ended. The beach strip is quite narrow, but the width varies in different areas from 3 to 10 meters.

The sand is mostly large, dark in color, interspersed with fragments of shells, coral and God knows what else, this is especially noticeable just above the surf.

Despite the fact that the coast has a decent angle of inclination, literally three meters from the surf line, the bottom becomes very shallow. On the one hand, it is a disaster for those who like to swim in an upright position, so to speak - to fully swim. To normal depth, you have to go from 50 to 200 meters, depending on which side of Ban Tai you threw your beach mat.

If it weren't for the garbage on the beach, muddy water and rocks under the water, Ban Tai could be called a children's paradise. Well, he is great for photo shoots. In the midday sun, the rays are reflected from the bottom and illuminate this half-meter of sea water with such colors that it takes your breath away. It’s a pity that I didn’t have the opportunity to bring you sunny photos..

Well, as a consequence of the shallow water, at high tide, many parts of the beach are completely flooded. In places where restaurants or resorts are close to the sea, you will no longer be able to walk past them on the beach. There is no great excitement in the high season..

There are more than enough sunbeds on Ban Tai, but I have not met rental points here. Basically, all the sun loungers are located near resorts and hotels, but there are also places where sun loungers are piled up near the bars. In general, if you fundamentally need a sunbed for tuning, then you will always find one for yourself..

It's the same with the shade - the entire coast is overgrown with trees, so finding a palm tree is not difficult, another question is that the shade on Ban Tai only happens until noon. As you can imagine, the western side of any island has the same feature. But according to my feelings, I can say that by noon it is so hot that it's time to move closer to the pool and cold cocktails. 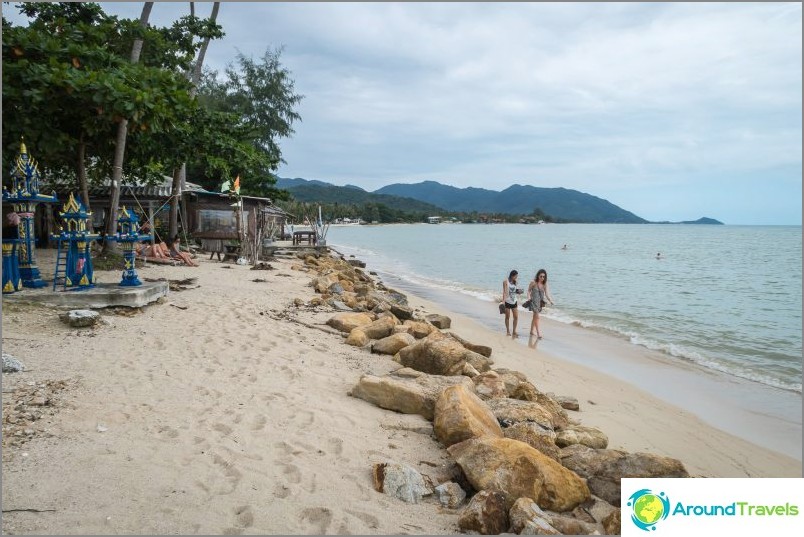 View to the left, towards Ban Kai 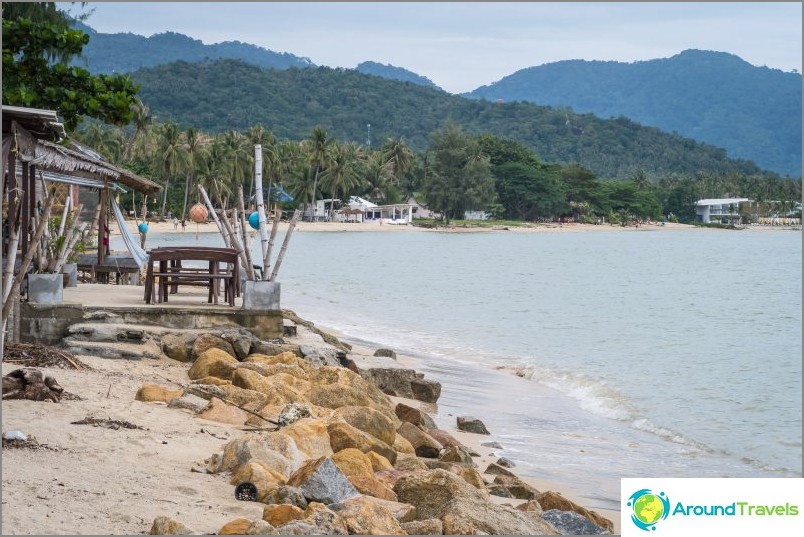 The coast has a rather sharp drop and is protected from blurring by stones. 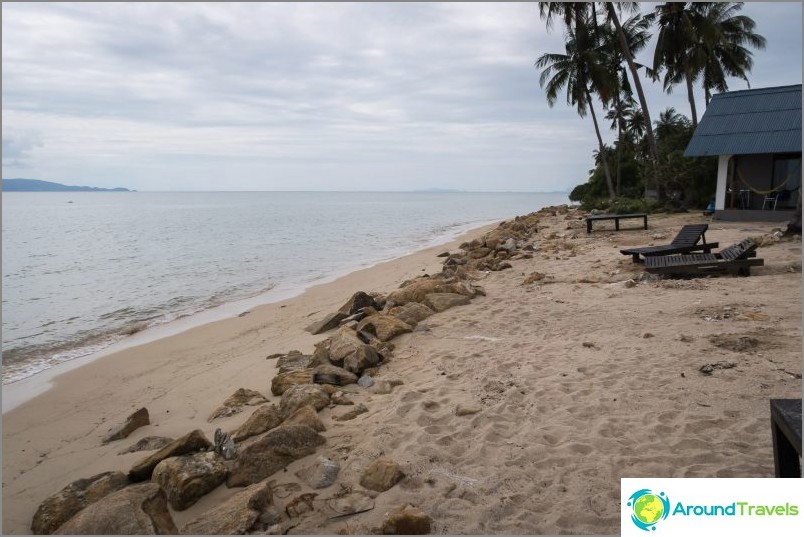 View of Ban Tai towards Ao Ban Charu. Left on the horizon - the edge of Koh Samui 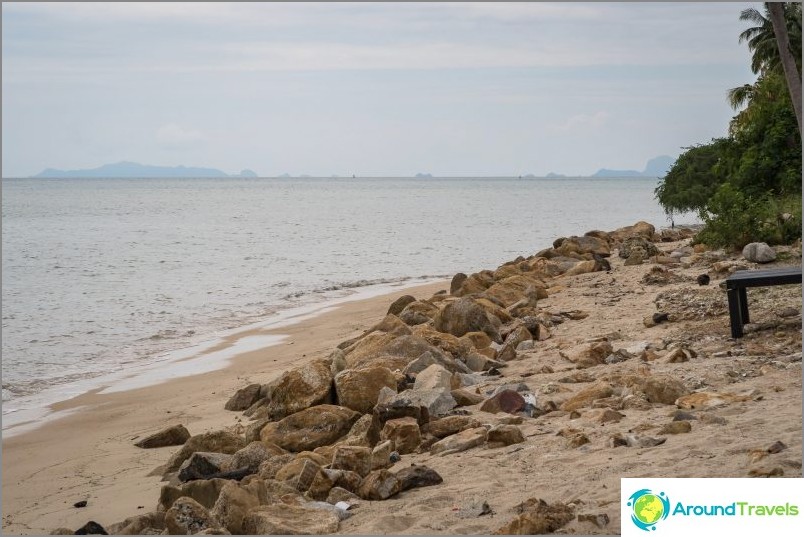 The relief of Angthong Marina Park is visible on the horizon 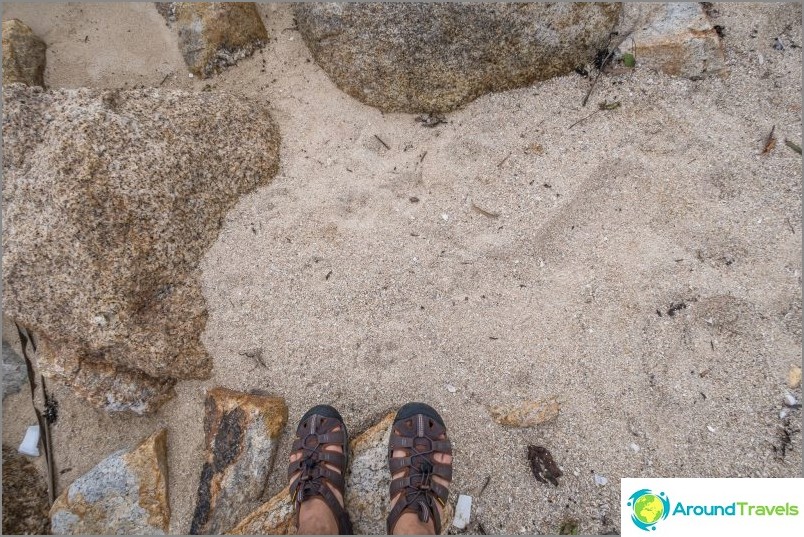 Visually about the composition of sand on the beach 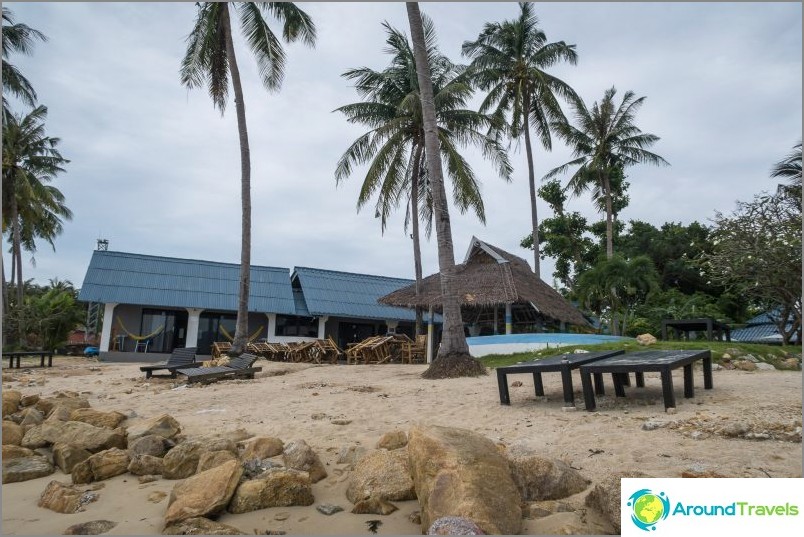 Behind - the houses of the Hacienda Resort & Beach Club

The main buildings are along the first line and near the road. Accommodation for tourists is concentrated by the sea, and commercial establishments are located near the road. In the center of Ban Tai there is a stadium and a branch of the Bangkok Hospital, and a small marina for boats and boats has been built closer to Ban Kai. Ban Tai has Big C and Makro supermarkets and several 7-eleven.

There are quite a few hotels and resorts on Ban Tai with a high rating and price list, but there are also plenty of inexpensive guesthouses. In high season or during the Full Moon Party, you can always find a hotel on this beach. By the way, to Haad Rin, where the party takes place, it is literally 20 minutes to go by bike or pickup minibus, this is a note for you if you suddenly go to a party, and on Haad Rin itself there will be no free hotels or the price is not satisfied.

I lived on Ban Tai here in this hotel. In my opinion, a combination of price and quality. It was very convenient to explore the island, since you could get to any point on the island by bike in a maximum of 30 minutes. Well, personally, I liked the proximity of Tong Sala and the food market, 5 minutes before everyone eats and coffee shops.

A characteristic feature of this beach is that there is a long distance between the main road and the coast, so the main concentration of housing is on the first line, and behind the road there are a lot of wastelands. Considering that the beach is quite long, I will give you a few more examples of good hotels, for convenience, dividing them by location:

West, closer to Tong Sala. The beach is worse and the prices are lower.

Center, best location on the beach, except for the area where there is a river bed.

South, a little more authentic and far from civilization.

Since my plans did not include a detailed study of all two kilometers of the beach, I went ashore at the very beginning of Ban Taya (on the way from Tong Sala), near the Beach Resort Hacienda. Actually, the hotel in which I lived was also nearby..

In any case, for the time being, the density of the building on the coastline allows you not to think about where you can go to the sea without problems, and where you will have to brush off the guards. So I parked in Hacienda's parking lot, looked at their gym and grounds, and then walked quietly to the beach. For the location of the resort, see the map below. 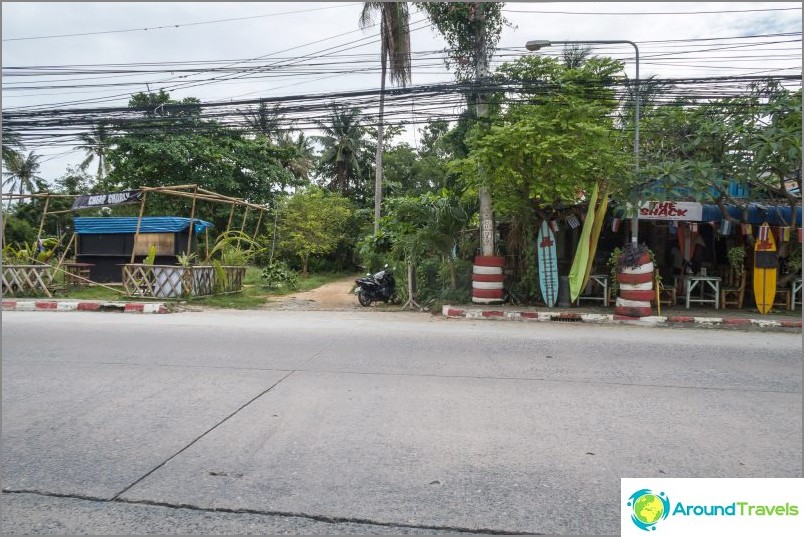 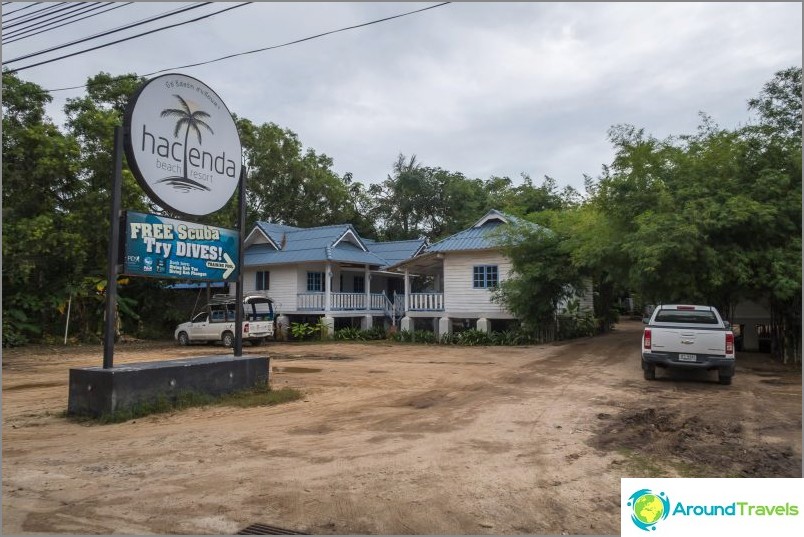 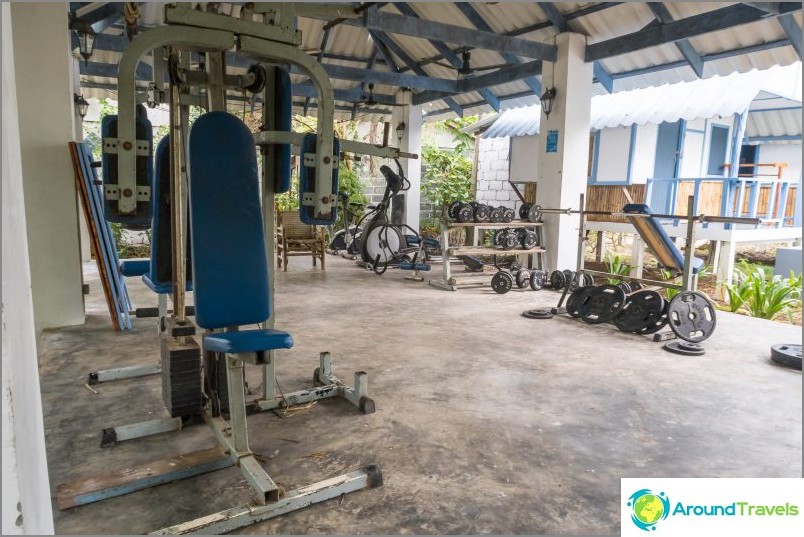 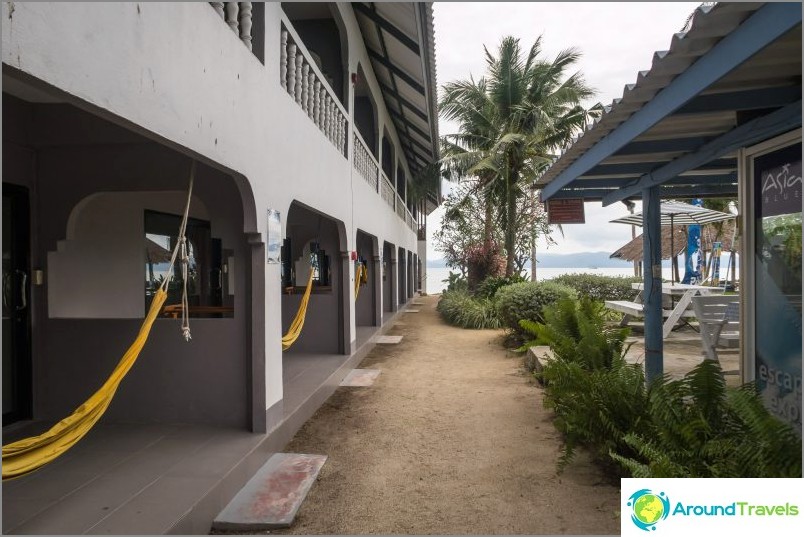 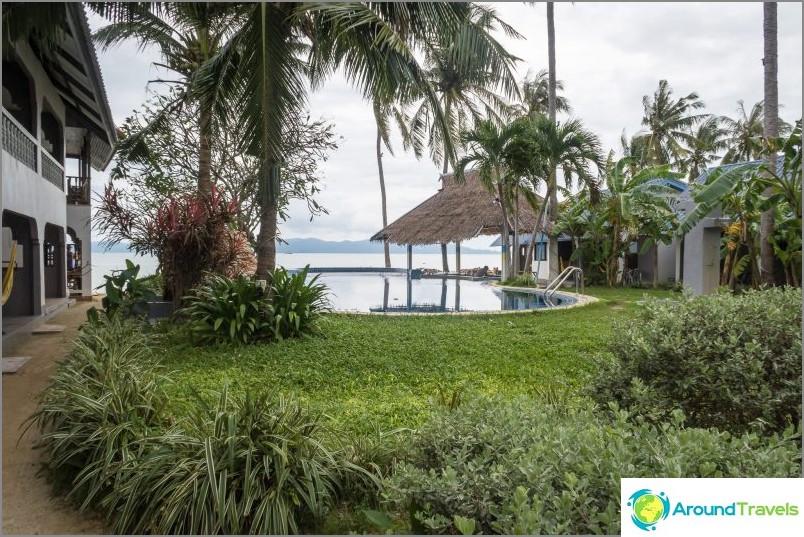