Almost every day we are asked about what is happening in Thailand, whether it is dangerous to go there. Probably, the Russian media scare people every day, and even the Foreign Ministry has already recommended refraining from traveling to Bangkok. In principle, it may really not be worth going to the capital, but all sites are full of messages that riots are taking place in Thailand, without focusing on the fact that there are rallies only in Bangkok. Yes, and in Bangkok itself, everything is not so scary. Since we live now in the epicenter of events, I decided to talk a little about how it really looks.

I warn you right away, I am not strong in politics, so I will not write anything on this topic at all. And also there are no guarantees that tomorrow everything will be exactly the same as today. Actually, in any case, you make the trip at your own peril and risk..

After the article was published, I decided to add to the beginning of the article a chronology of events related to the strikes in Bangkok, both past and future. The future ones, respectively, will be updated periodically. Description of the meeting, my impressions and photos, look in the second part of the article.

Unfortunately, there has been violence for two days. Several people have already died and about a hundred were injured. First, a group of radical protesters attacked a Thai-Japanese stadium where parties are registered for the elections, killing a policeman. Then at night, unidentified persons fired on protesters near the government house, as a result of which one deceased demonstrator.

The strangest thing is that when there were mass rallies with the participation of 200 thousand people, there were no casualties, and when 500 people besieged the stadium, casualties arose. There is talk of provocations by pro-government forces in order to tighten the regime. The policeman was shot from a high angle, which also speaks of a provocation.

Colonel Suthep, the leader of the protesters, said millions of protesters would take to the streets on Saturday 4 January and try to blockade Bangkok. This will consist in the siege of all government buildings, major road junctions, shopping centers. Suthep apologized in advance to the townspeople for the inconvenience in the capital, and urged all those not participating in the demonstrations to leave the city, for example, to go to a resort to rest. He told the rally participants to stock up on water, food and clothing, because the blockade could last for a long time, almost until the elections..

The Bangkok lockdown date has been moved from January 4th to January 13th. It is planned to block about 20 intersections. But they promised to leave one lane for buses and ambulances. Also, it seems like they will not block the surface and underground metro, as well as trains. The airports also promised not to touch, but some flights from some airlines were canceled to Suvarnabhumi. Demonstrators also want to turn off water and electricity in government buildings. Thai army disagrees with intention to blockade Bangkok.

The blocking of the BKK has begun ... Next to us at the Victory Monument intersection is full of people, it is blocked. There is music playing and from time to time someone says something. But while everything does not differ from previous rallies, this has already happened, just more massively. Other planned intersections are also closed. This means that it is advisable to move around the center of Bangkok by metro (or on foot). But of course there are cars on the roads, Taxi, bikes, maybe a little less than usual, but they drive, just not through those intersections that are blocked, the city is big. The metro also runs, and the underground works until 2 am. 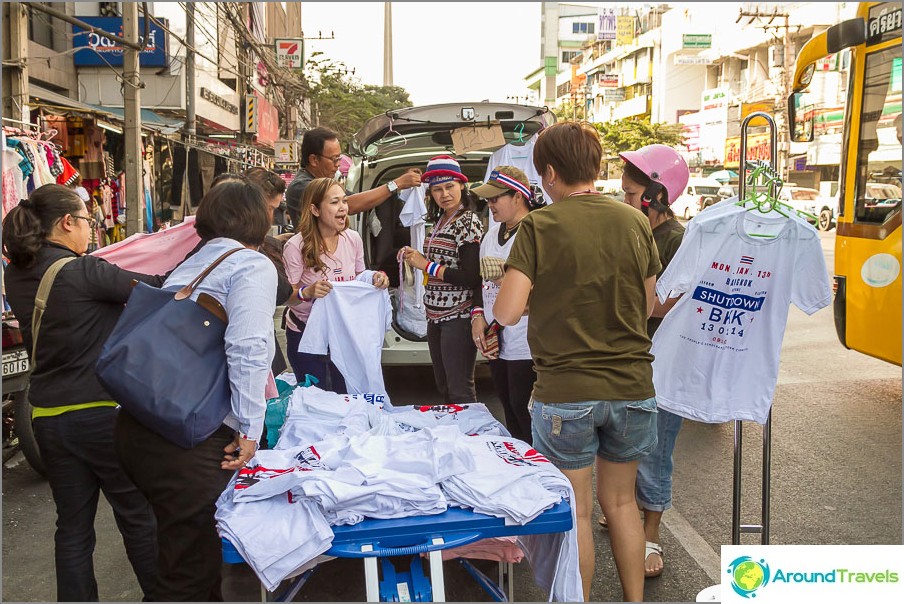 So far there are no changes, the BPC is blocked. Nevertheless, you can visit the city and travel to different places. There is no information that shopping centers or any sights are closed. Everything works, tourists shop and go to the sights. Naturally, it is better to use the metro / skytrain, well, and lay the time for «sneaking» through the crowd (if you find yourself in places of congestion). Actually, the crowd is only at designated sites, in other places the city lives an ordinary life. No emergencies.

I read that there is no one near the Democracy Monument, which means that you can go to Khaosan calmly. Several airlines canceled flights to Bangkok, but airports are operating normally.

We took a taxi to our center today to study with our son. We drove almost from Victory Monument and further north towards Chatuchak. If you do not enter the blocked intersections, then you will not know about the demonstrations, everything is quiet and calm. At the same time, there are not many cars on the road.

A grenade was thrown right next to opposition leader Suthep this afternoon during a march in the Banthad Thong Road area. 36 people were wounded. Something is starting. Here is a holiday with fun.

Another provocation. 2 RGD-5 grenades were thrown at Victory Monument, 28 wounded. We live nearby, we heard explosions, but did not pay attention. Nevertheless, everything is calm in the city, do not watch the news, do not go to the protesters and you may not know anything about the existence of the demonstration. In any case, it is better to avoid the main platforms for rallies, otherwise you never know how you can get under a grenade.

A state of emergency is introduced for 60 days. The state of emergency allows the authorities to declare a curfew, prevent demonstrations from entering areas, prohibit gatherings of all kinds, detain people on the street, and so on. How does this threaten ordinary tourists? I don't know yet, it may well be that nothing.

To be honest, there is nothing to write. Despite the emergency in the city, everything is the same: the protesters are on strike, the intersections are occupied by them, as before. Most of the crowds at the sites gather in the evening, since everyone is at work during the day. Therefore, if you are going to the center, watch all sorts of aquariums, etc., do it during the day and, probably, it is better not on weekends. Although the crowd does not really interfere in principle, one can only fear provocations.

Walked to the Victory Monument, photographed a little. 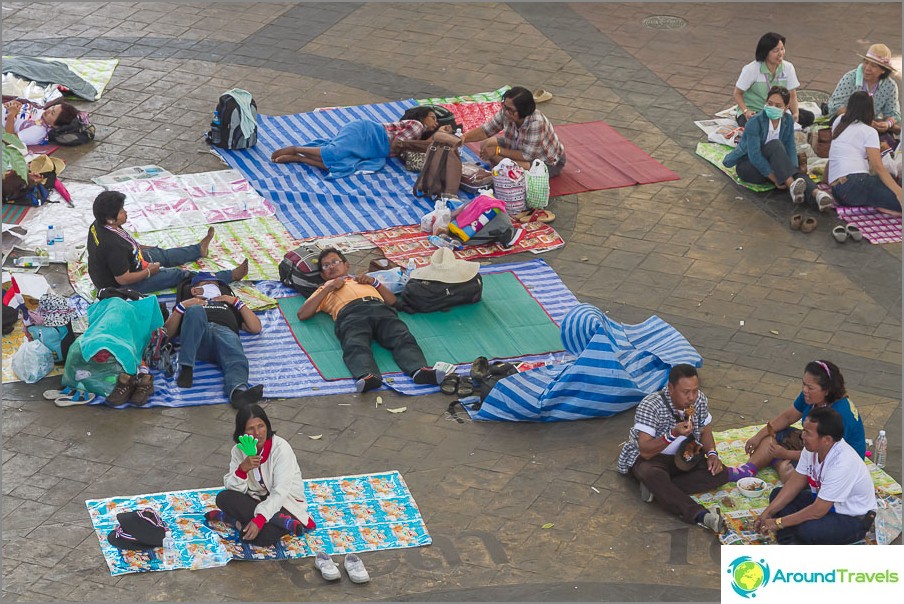 Some live near the Victory Monument 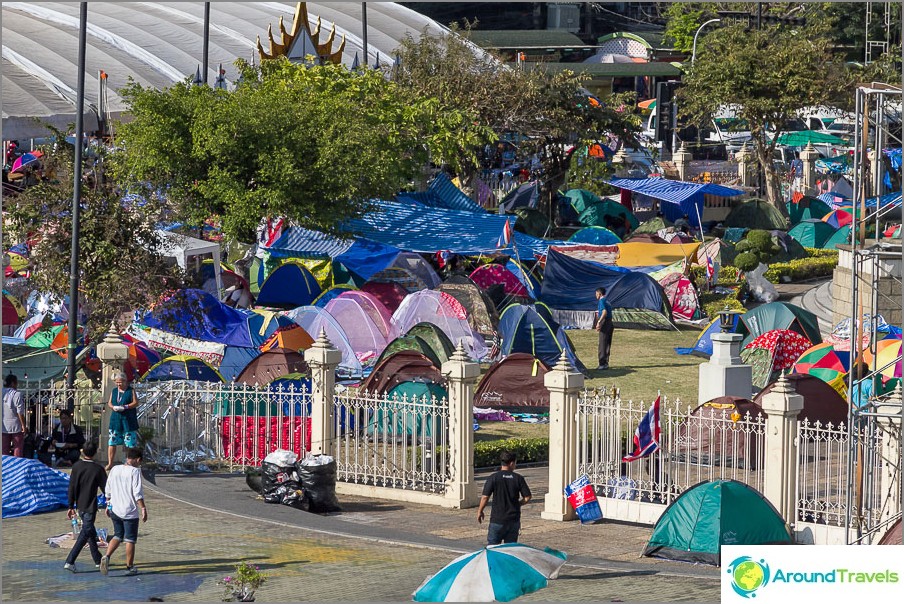 I found an updated map in the open spaces with points where and what is happening. All points are labeled, so you have to click and read the description. The map is updated not hourly, but rather quickly.

So, let's start with the fact that demonstrations and rallies take place only in Bangkok. In other cities, everything is calm. Therefore, if you are going somewhere to Koh Samui or Phuket (and any other cities), then you have absolutely nothing to worry about. In addition, if you are flying with a transfer in Bangkok and the airport is blocked. At the moment it is working and everything is in order, and it seems that no one has spoken about the strike in it until now. I am sure that if this happens, then everyone will know about it at once..

Not in all areas

Demonstrations are taking place not just in Bangkok, but only in several areas. The demonstrators have main platforms, where they are constantly, like the Democracy Monument, which is located in the historical center of Bangkok near the well-known street Khaosan Road. By the way, palaces and temples are operating normally. Bangkok generally lives on with its quiet life: shops, subways, shopping malls and so on work. There is a chance that you will arrive in Bangkok and will not notice anything at all, depending on where you walk. Several photos from the Internet, since I have not been to the main sites. 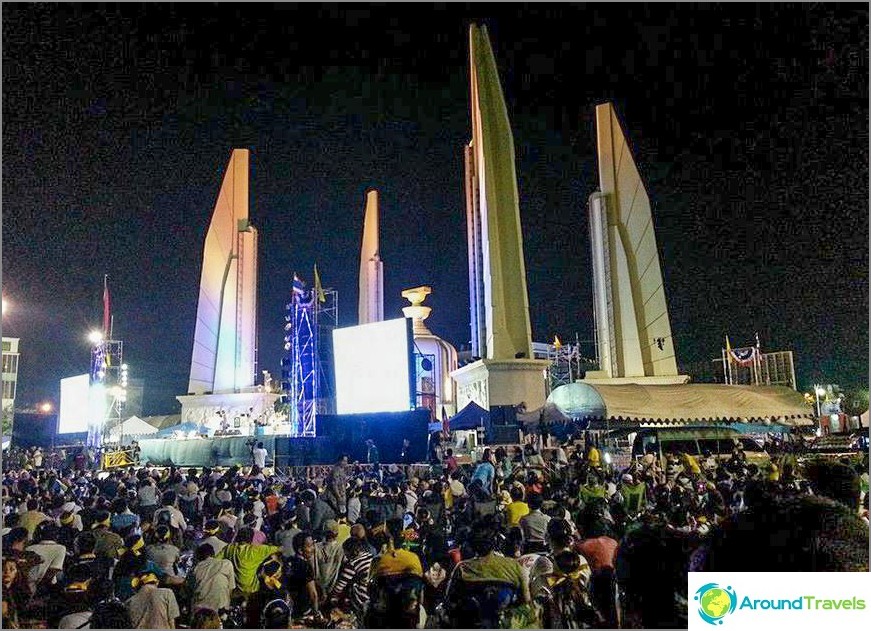 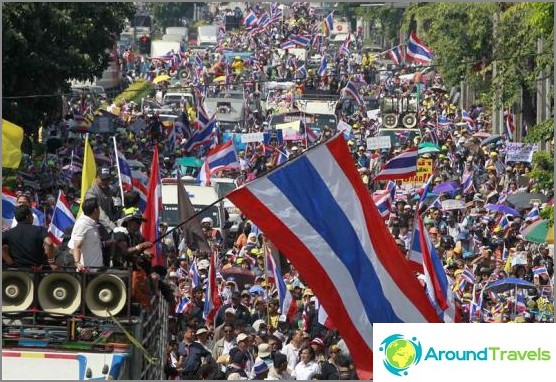 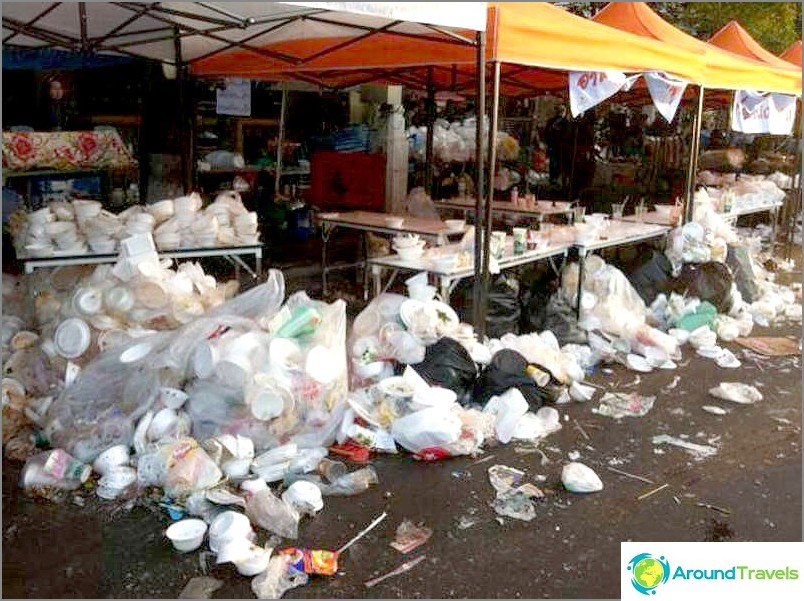 Srach after the demonstration, but they remove him pretty quickly 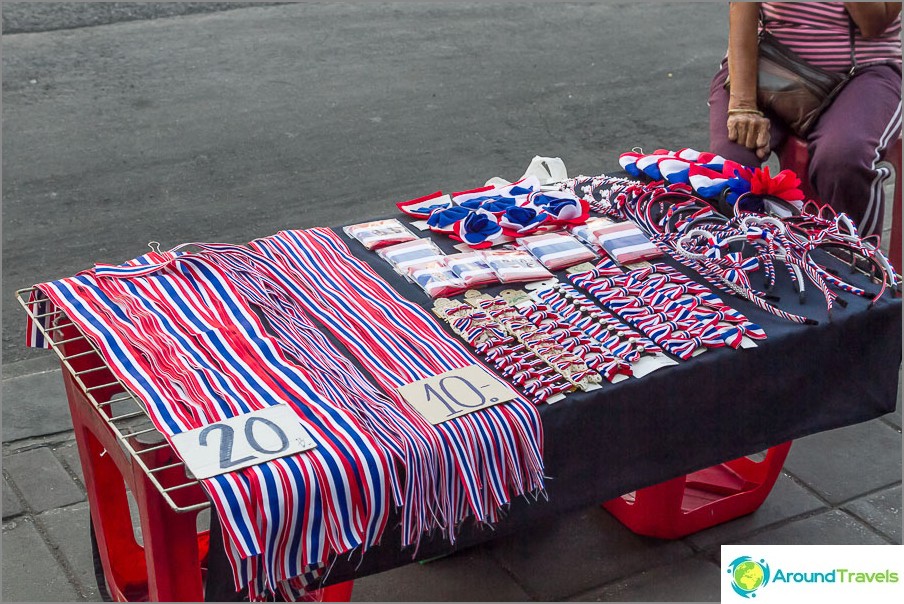 You can buy ribbons and whistles near any site 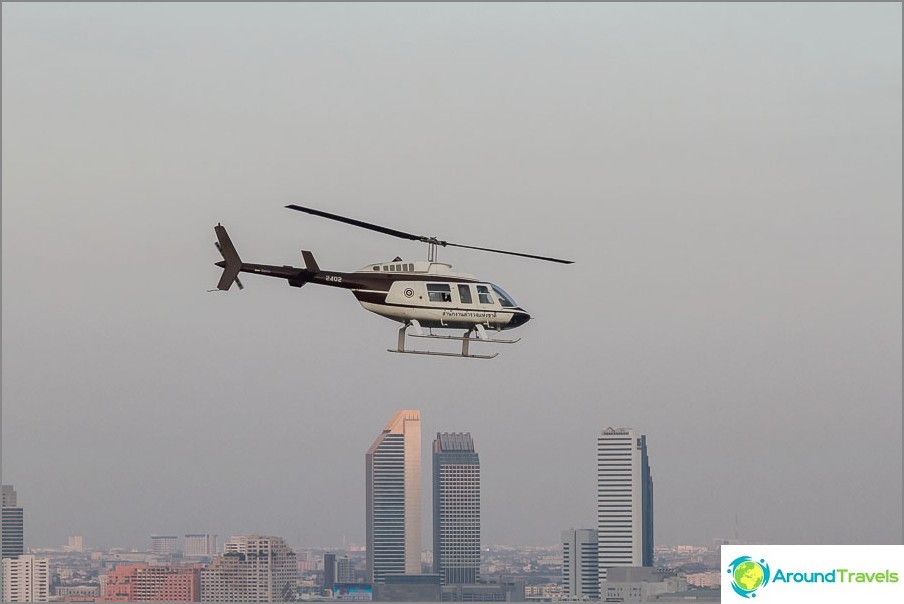 Moving protesters around the city 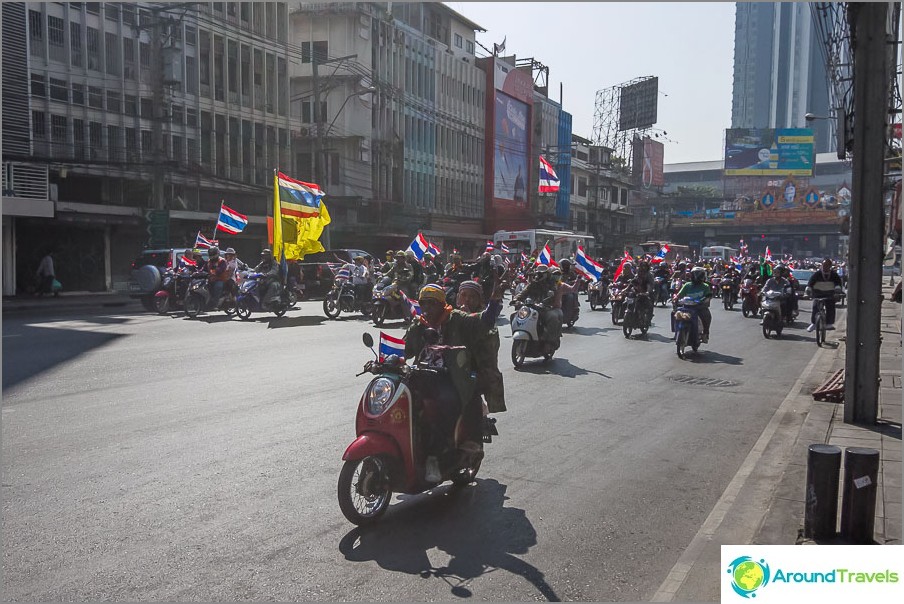 This is not a rally of bikers, this is the movement of protesters 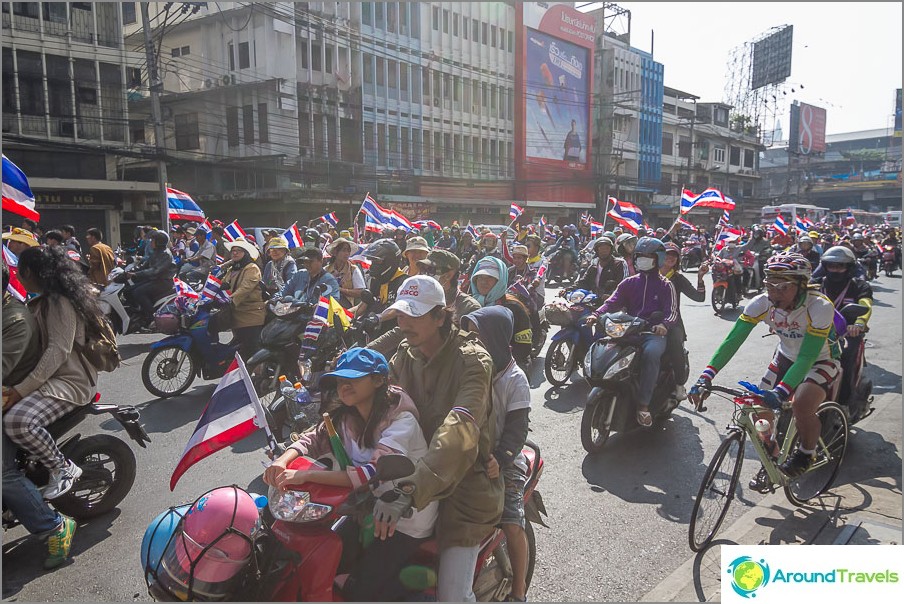 With children, on bikes and bicycles, with flags and smiles on their faces 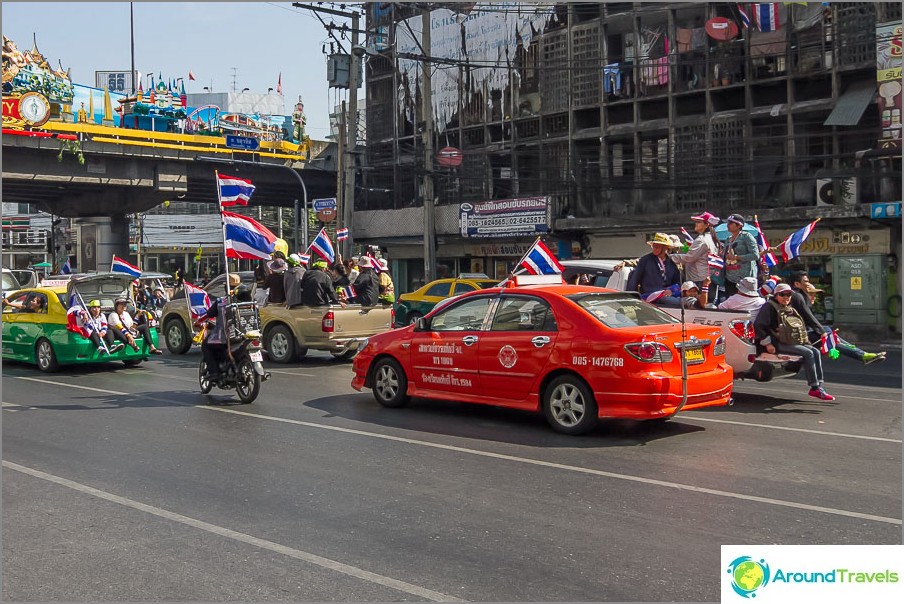 Someone rides in cars, or even in the trunk of a taxi 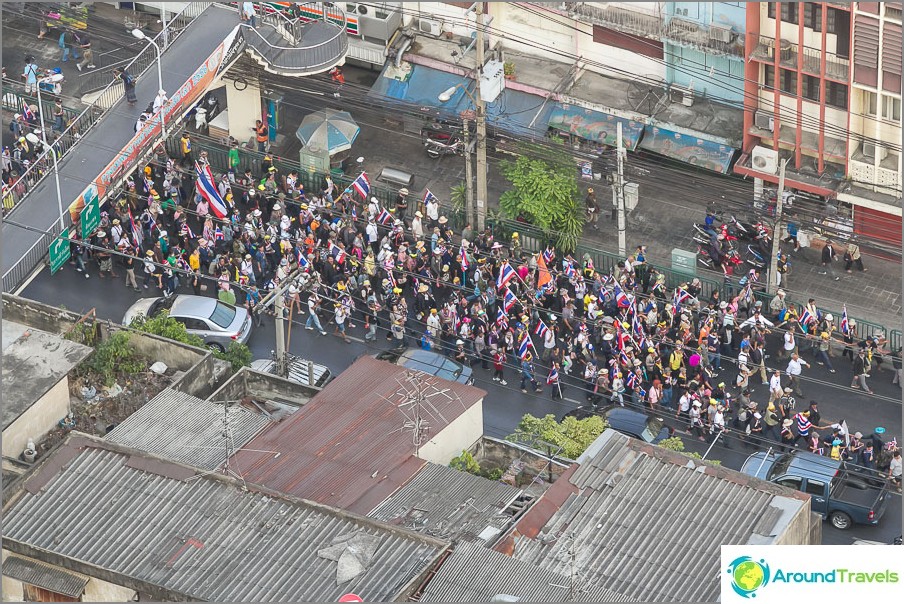 On Sunday, December 22 (there was a mass rally, many temporary sites) I went to Pantip Plaza for the wires, and there was a large crowd on Ratchaparop Street near Big C Supercenter and near Siam that filled the entire street. Nevertheless, all shopping centers worked, as did Pantip Plaza itself, which I needed. And a day later, on Monday, my mother went to this very Big C, where yesterday it was not possible to approach, and everything is fine there, as if there were no demonstrations. All this I am writing to the fact that you just do not need to go specially to those areas, although I do not see anything particularly scary in this. This is not a war, but peaceful demonstrations. We saw that the crowd was walking, turned around and went in the other direction, if you are directly afraid. The same thing with the sites, saw a massive crowd of people - did not go inside the crowd. 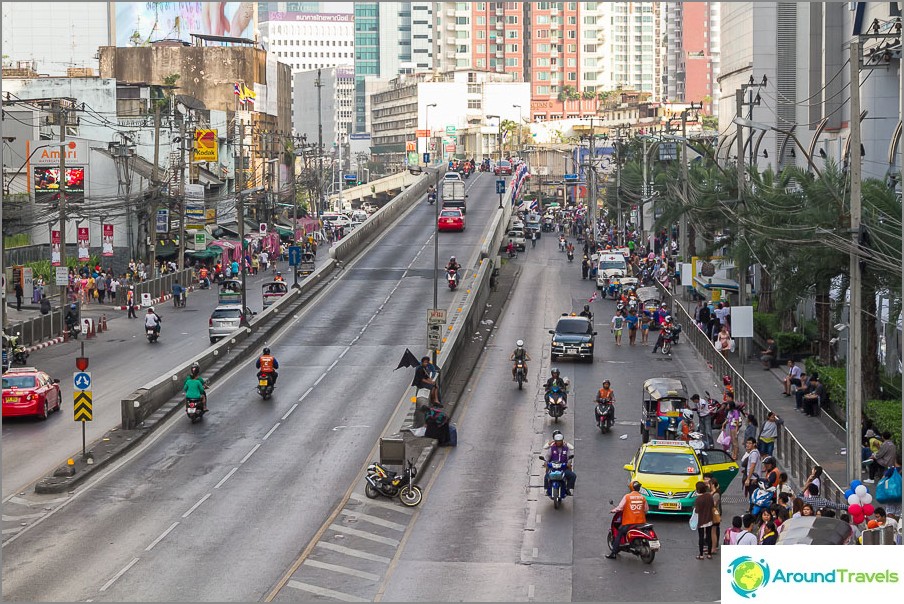 Near Pantip Plaza, the road is moving, and the street perpendicular to it is occupied by demonstrators 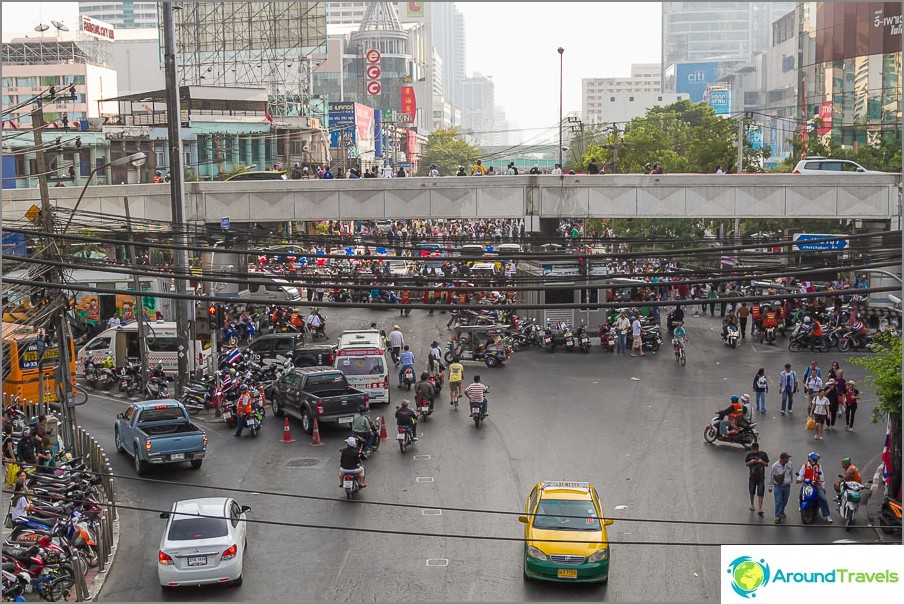 And here is the most perpendicular street. If you go further, then there is a crowd

And the last thing I would like to say. The demonstrations in Bangkok are not at all aggressive. They voice, make noise, whistle, declare from the stands, sometimes even sing, but nothing more. The main contingent is the middle class. Many come with children and even animals (I saw dogs in the bike basket). There was an episode a month ago when a bus was smashed and something else, but it feels like it was done for show. For a month and a half of rallies, there were literally only a few victims. No Omon, who beat everyone with truncheons and takes them to jail on buses. The demonstrators came to the government house and calmly occupied it. They don't have a massacre in their culture, everyone tries «go around corners» and give in. Therefore, although the police appear on the streets, they behave calmly and bored. Although the use of rubber bullets, water cannons and tear gas is not excluded in the heat of passion. 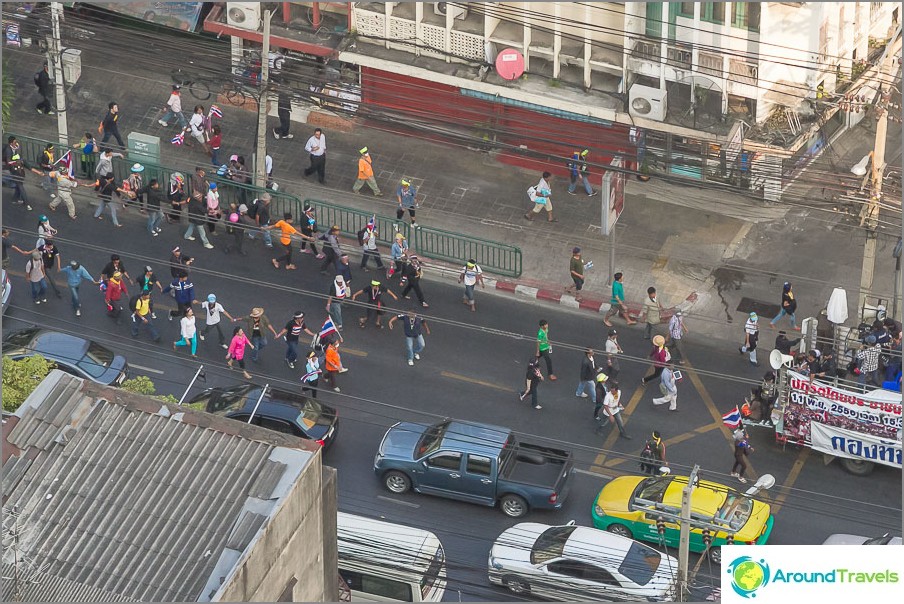 Pay attention, they go by the hands, almost a round dance 🙂 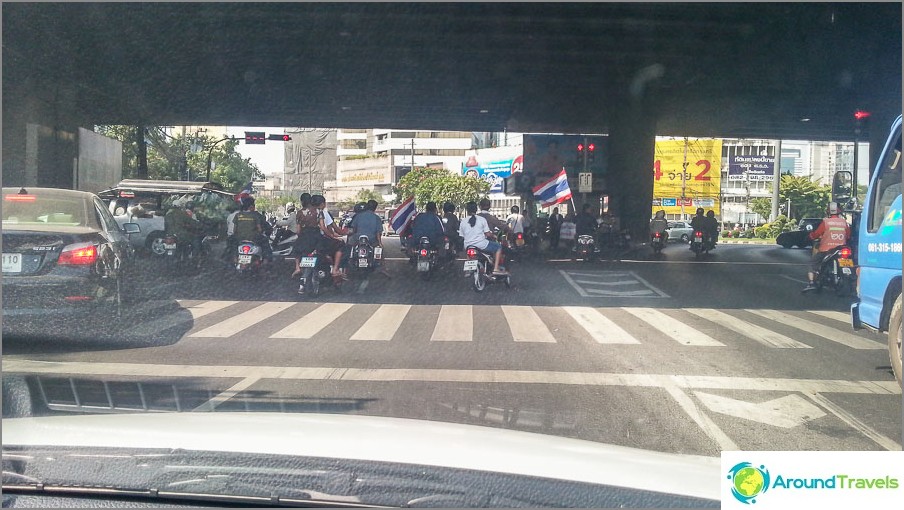 Hour stood in a traffic jam because of the demonstrators. They went around cars, no one broke the glass

But it is always worth remembering that any crowd, even a crowd of Buddhists, is unpredictable. There may be provocations, there may be accidents. Also, everything can go completely different from the way it is now, in 2004 everything was tough in the south, judging by the video. In general, do not relax, as if you are going to Disneyland. The prime minister they wanted to remove is still at the helm. And although the government was dissolved and new elections were called, the issue remained unresolved, and the demonstrations continue. Someone even predicts a civil war closer to the elections (February 2).

Those who want to understand the topic in more detail can read this topic on the forum. She's pretty interesting.

And on http://blueskychannel.tv/ they show in real time what is happening in the city and provide the latest news, albeit in Thai.

P.S. I read that immigration promised deportation to foreign tourists participating in the rally, so just take a picture and not participate 🙂

Bangkok Suvarnabhumi airport and how to get ...

The home stretch of the "Most memorable ...