Jomtien Beach is one of the symbols of Pattaya, the longest and probably the most famous. The Jomtien area is popular not only with tourists, winterers and expats, Thais also love to come here for the weekend, have a big group of picnics on the sand, on the sidewalk by the beach, or even in the back of a pickup truck parked on Beach Road (the road along the beach). Especially many Thais come to Jomtien on weekends.

At sunset and after dark, in the evenings, it is crowded and quite noisy (although the area is still considered quieter than the center of Pattaya). Music is thundering outside the Night Market and from the jeeps parked along the road. During the season, there are many Russian tourists on the beach, especially in the center and in the south of Jomtien, where hotels and condos popular with compatriots are located.

Jomtien is not the best place for swimming, the water is still rather dirty. And in the sand on the beach all sorts of rubbish comes across. But taking a walk, sitting by the sea, living nearby is very convenient. Not as noisy as in the center of Pattaya, there are quiet streets with greenery, all the infrastructure, but at the same time, public transport runs along the road along the beach..

The length of the beach is about 5 km, unlike many others, it is not an arc, but an even straight line. The northern part, adjacent to Cape Pratumnak, is more urban and infrastructurally developed. In the southern part it passes into the Na-Jomtien area. Behind the Sigma Resort, the beach itself is fading away, transforming into a newly built concrete embankment. Not far from the southern end of Jomtien (even further south) a river flows into the sea.

The water in Jomtien is often yellowish and cloudy. Garbage comes across. Both organic and plastic. The currents and the wind are directed so that everything is washed ashore, and quite a lot of litter in the big city. In addition, trees growing along the beach drop fruits and leaves on the sand, they are not always removed on time..

The beach is quite spacious in width, up to 15 m.However, numerous rows of sun loungers eat up the whole place, at high tide they remain at best a few meters to the water, or even the first row stands practically in the surf.

In the season itself, i.e. from November to February, when there are neither large waves nor low tides, entry into the water is not too gentle and not too sharp, it is quite comfortable. True, the water can be cool and even cold. Strong winds from the sea begin to blow in February-March. The water is warm, but you can freeze when getting out of the water or even just sitting in the shade. At the same time, from the end of February, the high tide season begins..

The sea goes away for several meters, exposing a slightly muddy and dirty bottom, in some places different marine inhabitants come across. During low tide, it becomes inconvenient to swim - for a long time it is shallow, knee-deep, to walk far to normal depth and the water is muddy. Low tide times are not always the same, in the southern part of the beach the low tides are more noticeable, in the north - less.

All around Jomtien there are many paid sun loungers under umbrellas. Basically, these are also beach cafes in combination, food and drinks when ordering are brought to the table by the sun lounger. Some places also offer clothes hangers. Trees grow along the sidewalk throughout the beach to provide shade.

True, during the day you still have to look for a good place in the natural shade, especially in the season, because there are a lot of people who not only want to lie on their rug, but also trays with drinks and food, sun loungers that occupy most of the beach. There are spaces free from sun loungers, but Thais often use them for picnics, so there is a lot of small debris and cigarette butts in the sand..

Also on the sidewalk along the beach there are areas with benches and steps, where you can always sit in the shade during the day. The downside is that it is always quite crowded and not very clean. In addition, there are large trash cans along the road right by the sidewalk that stink a lot.. 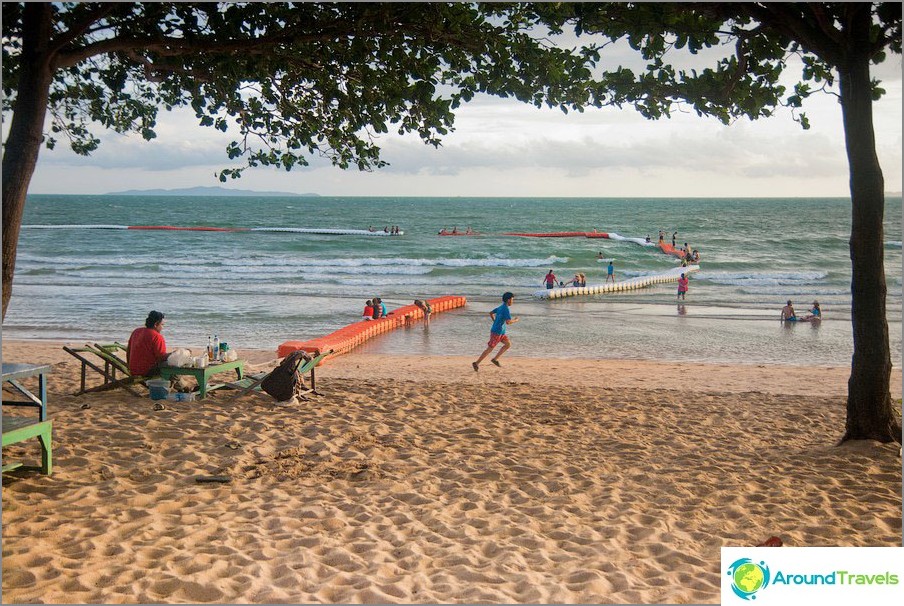 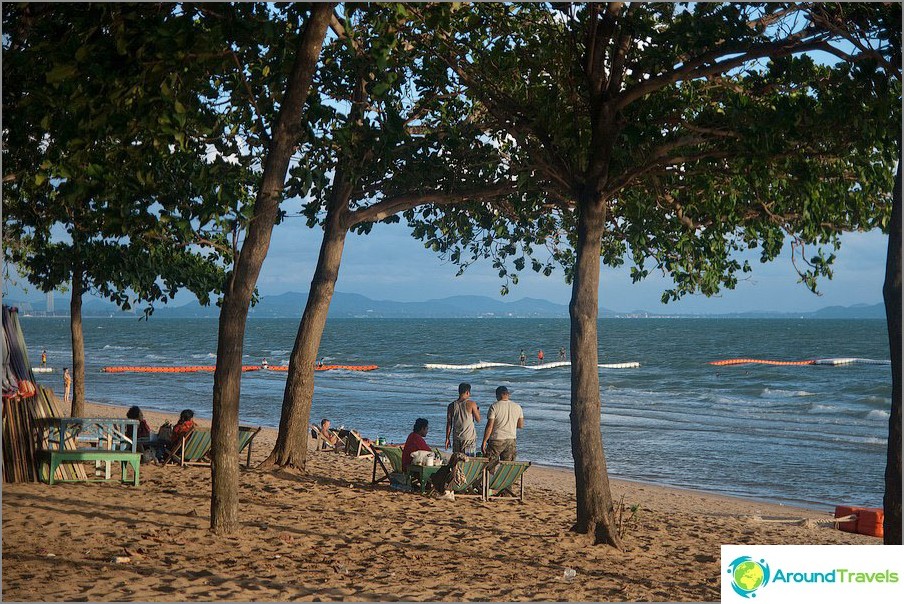 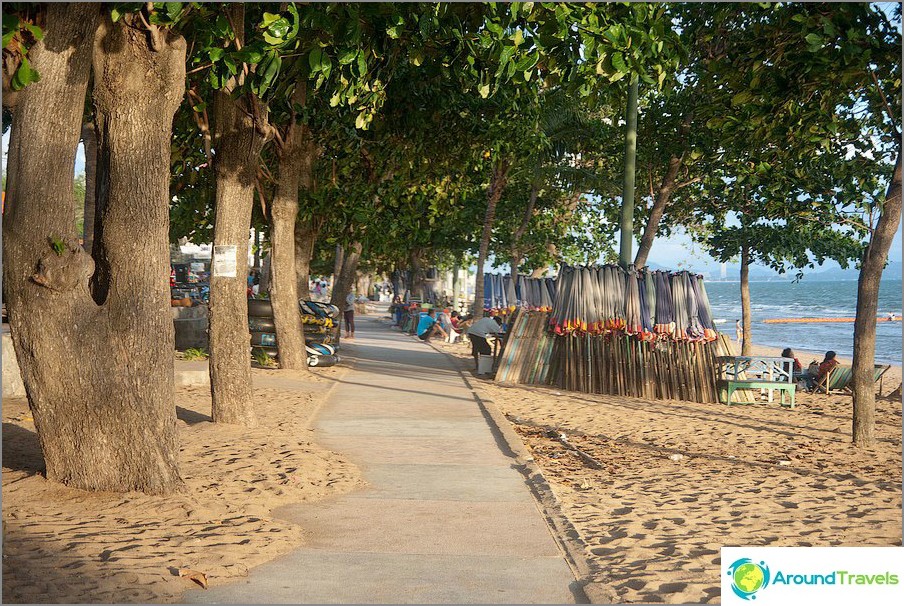 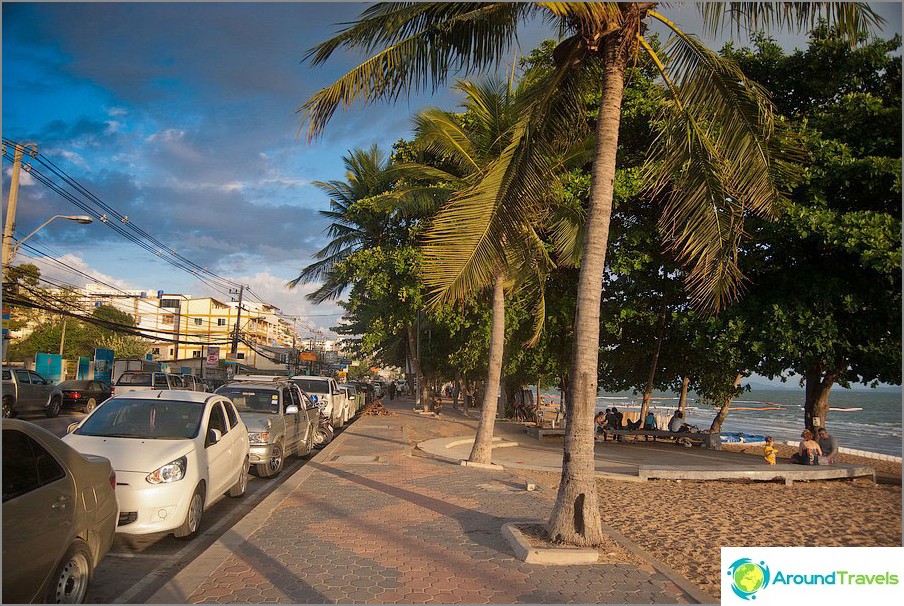 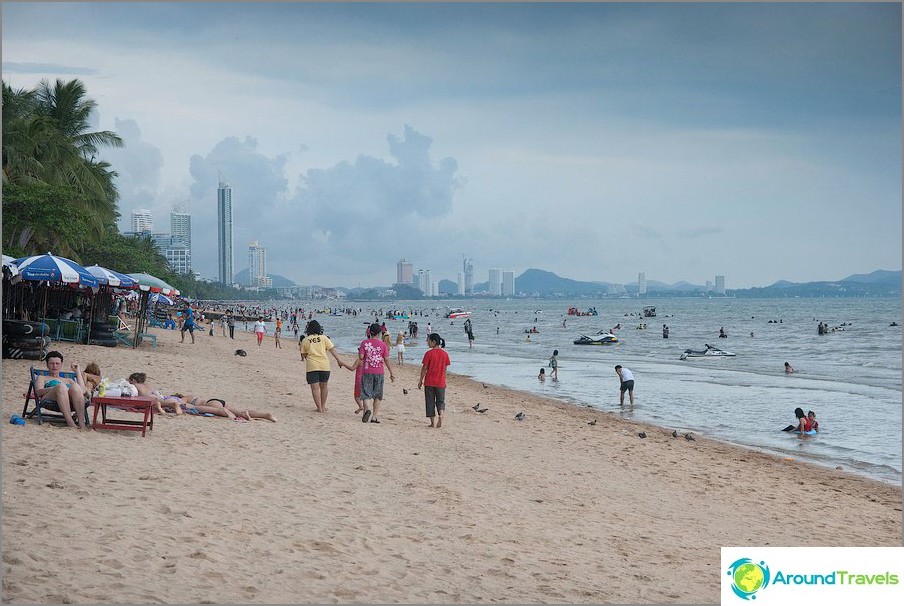 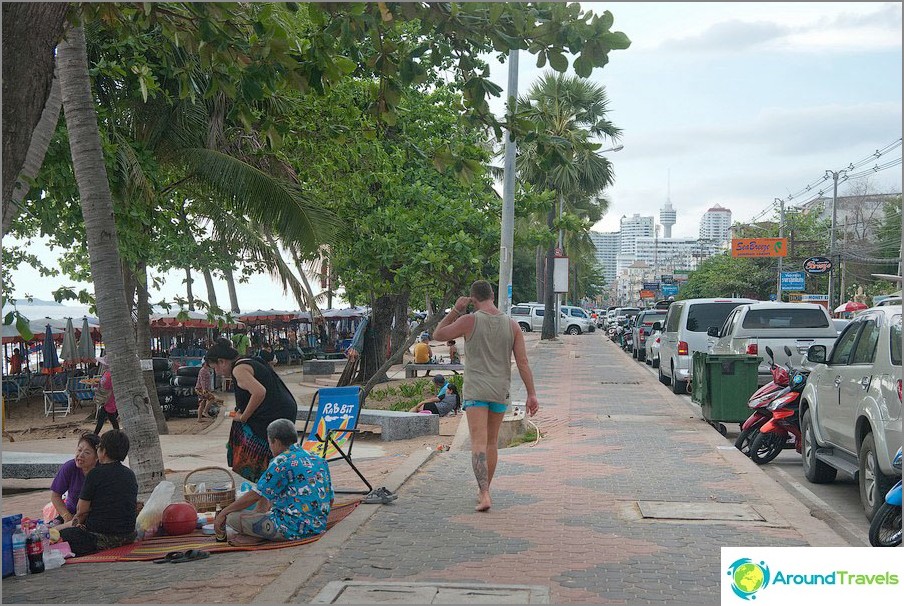 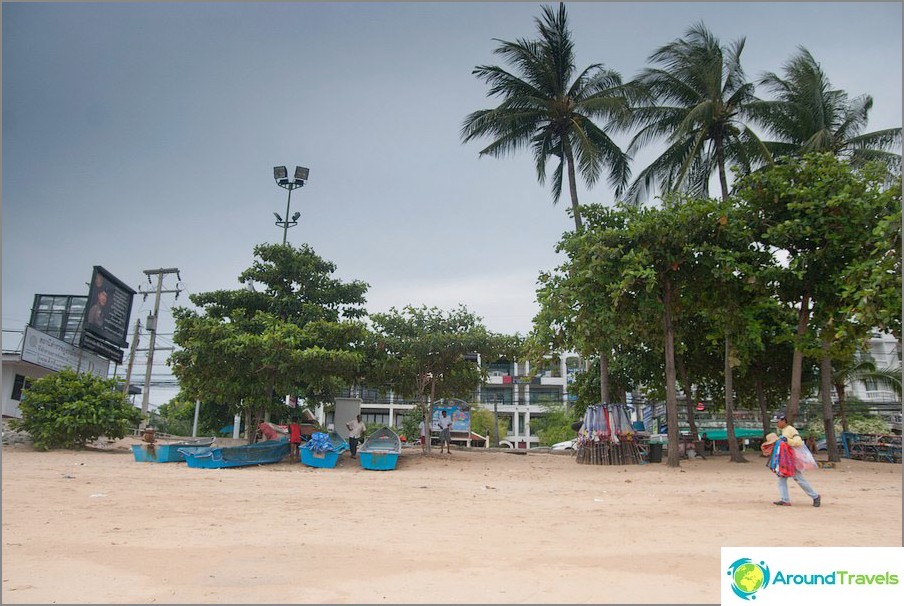 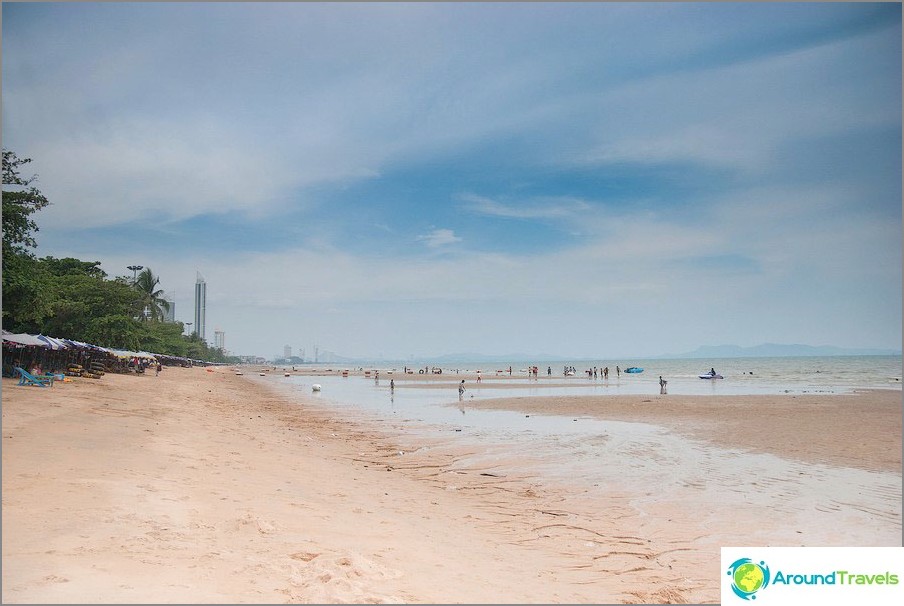 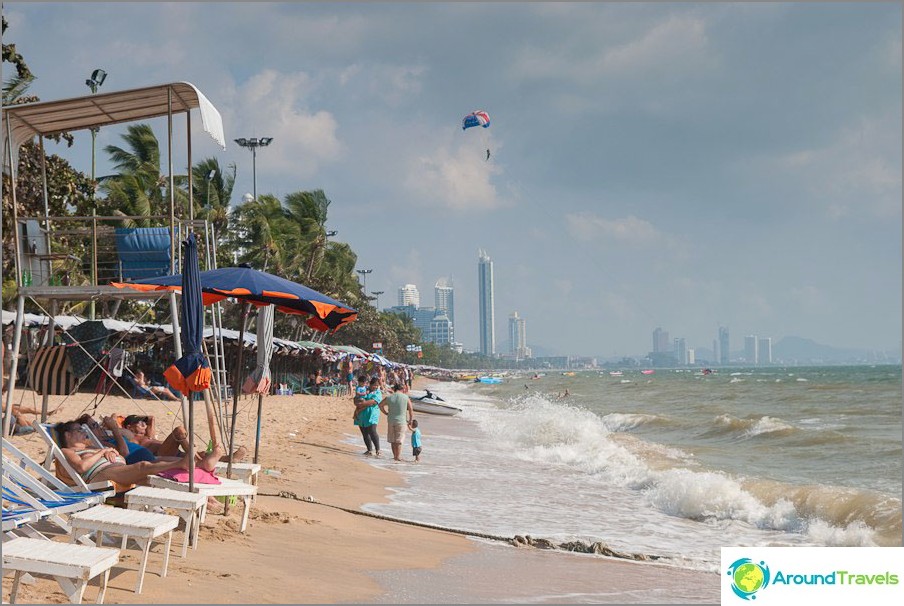 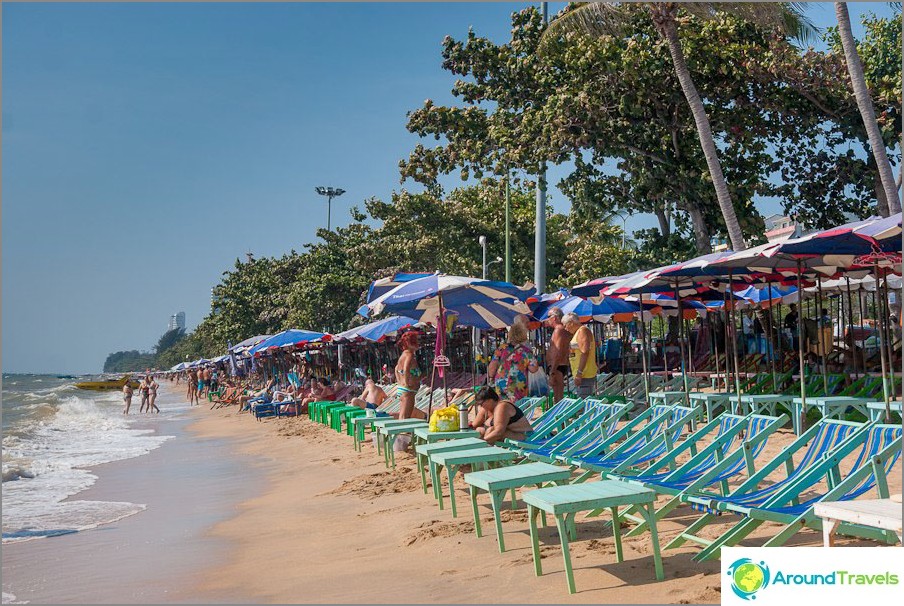 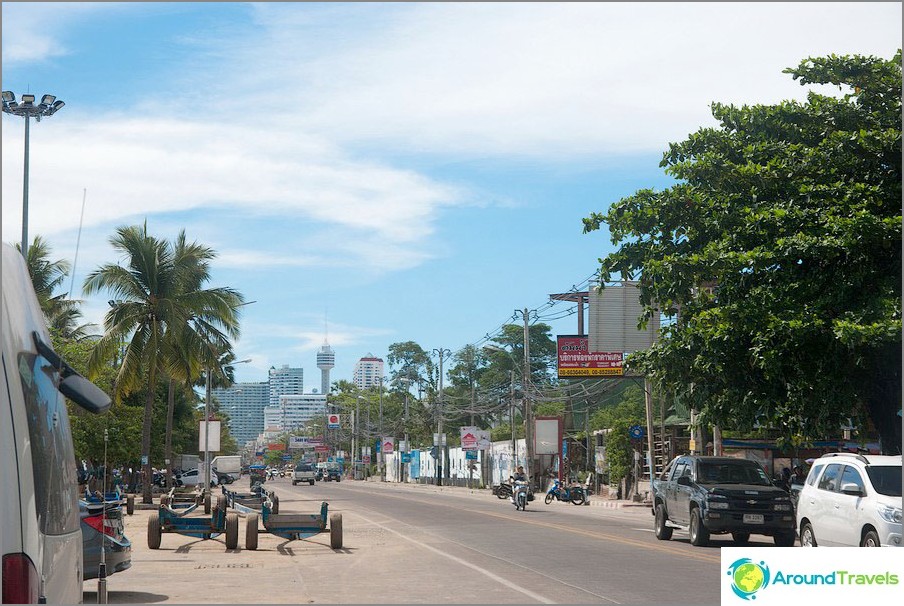 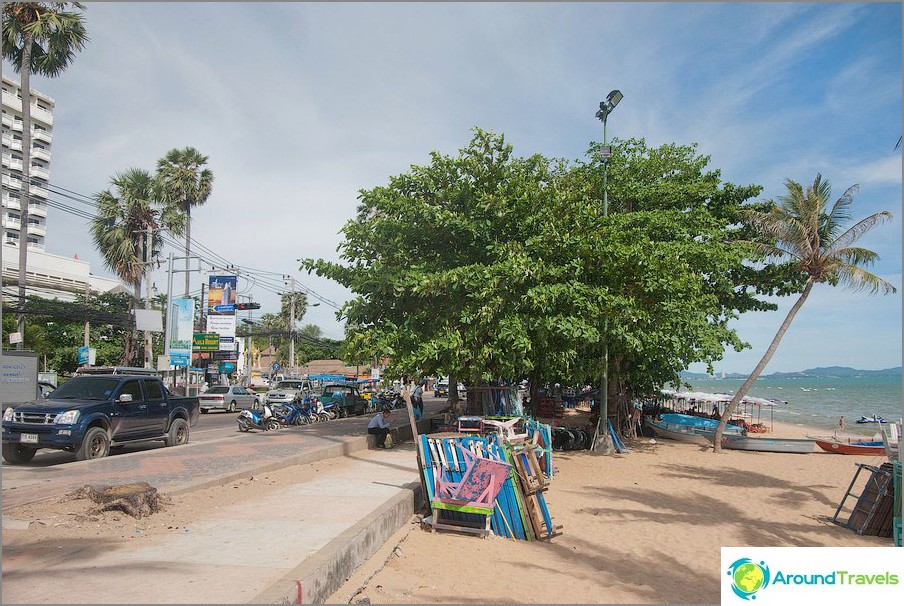 A busy road runs along the beach 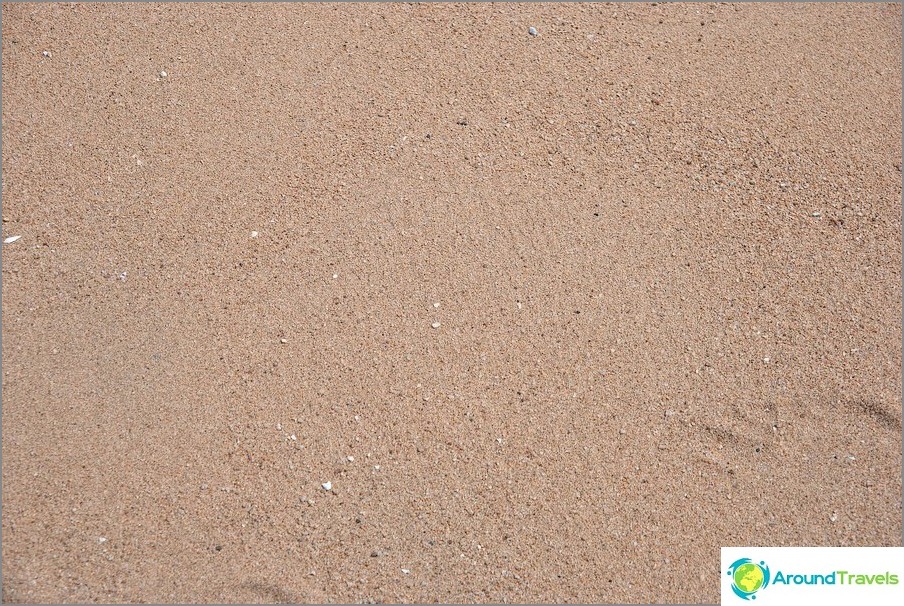 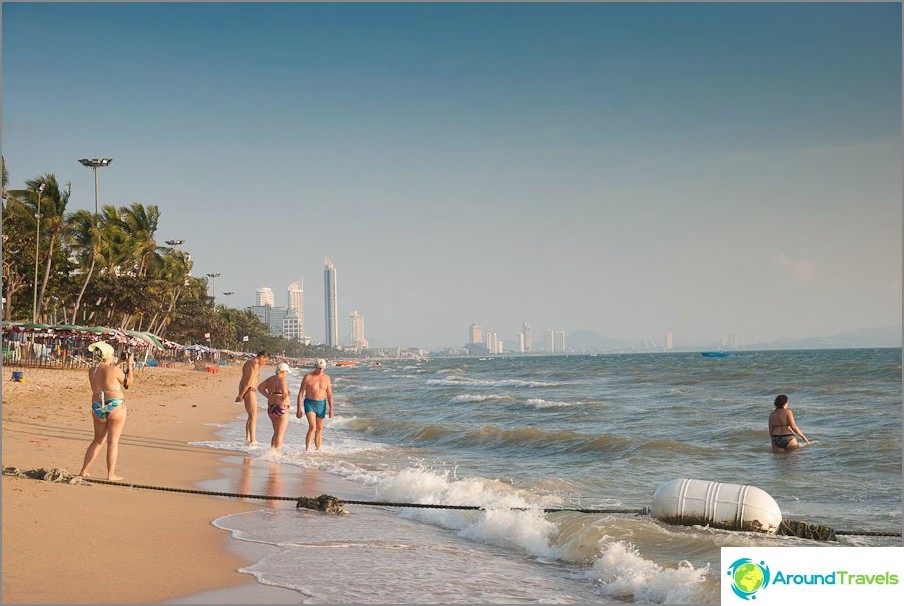 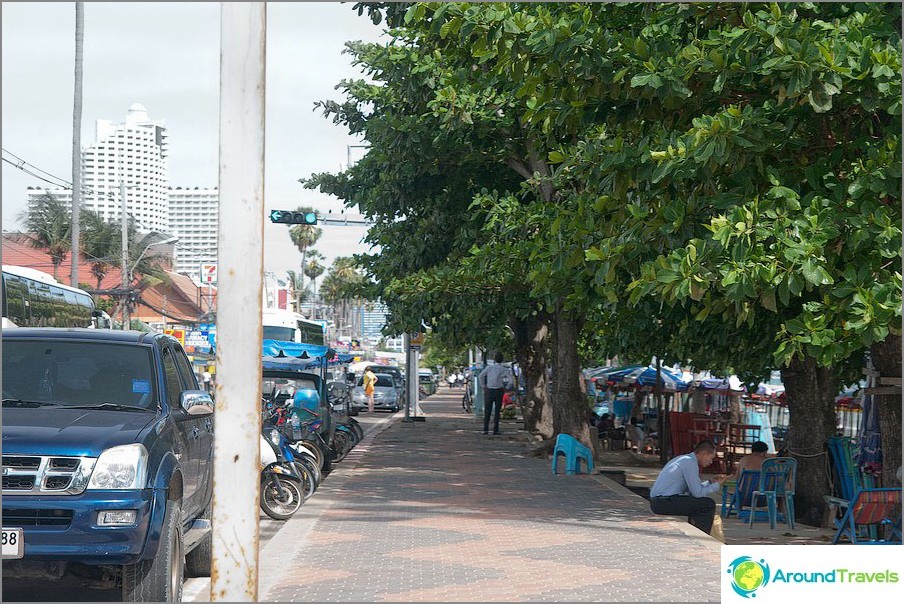 Sidewalk along the beach 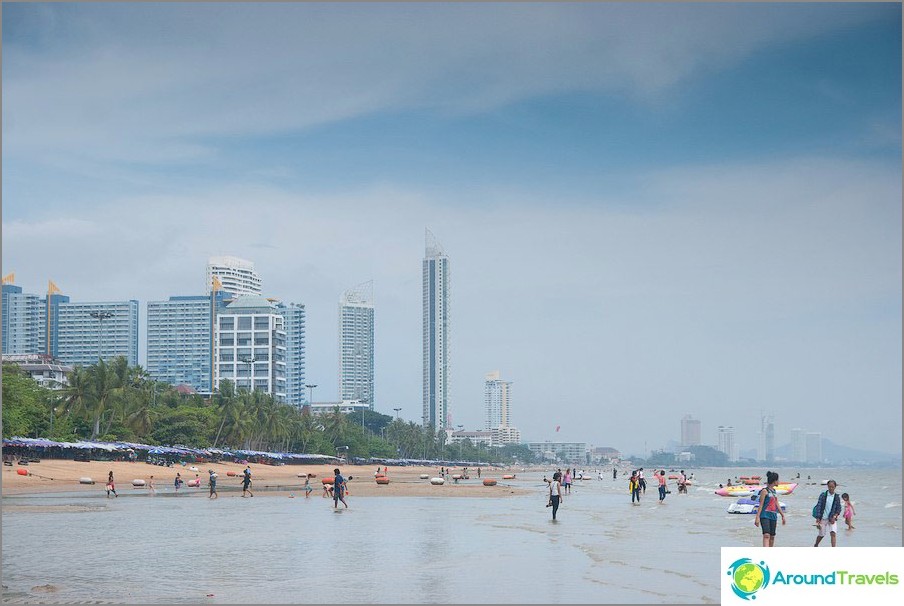 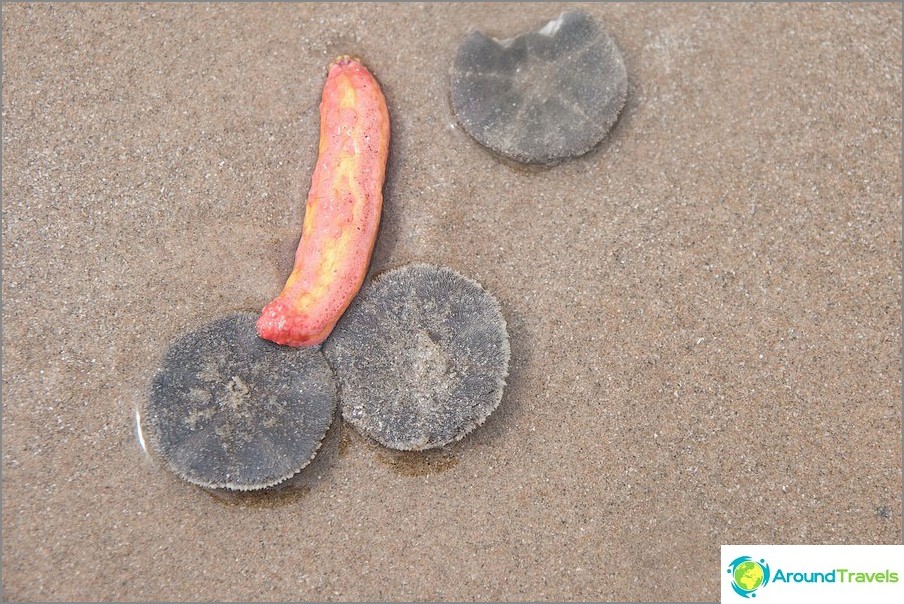 Inhabitants of the bottom at low tide 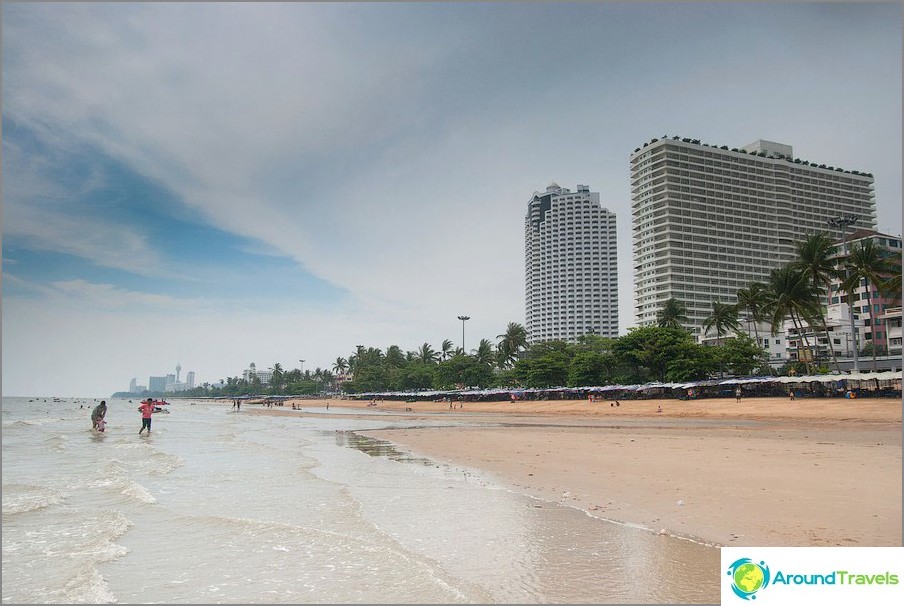 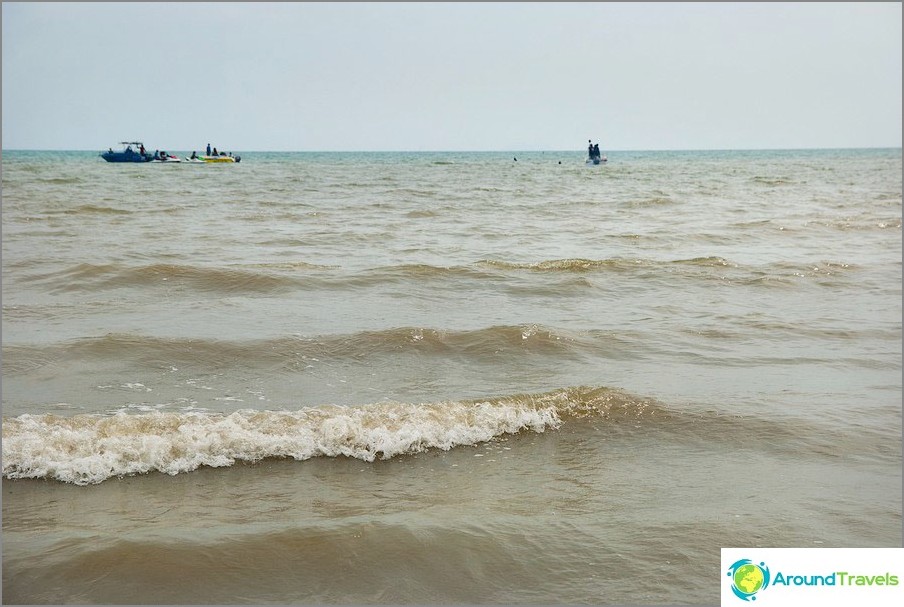 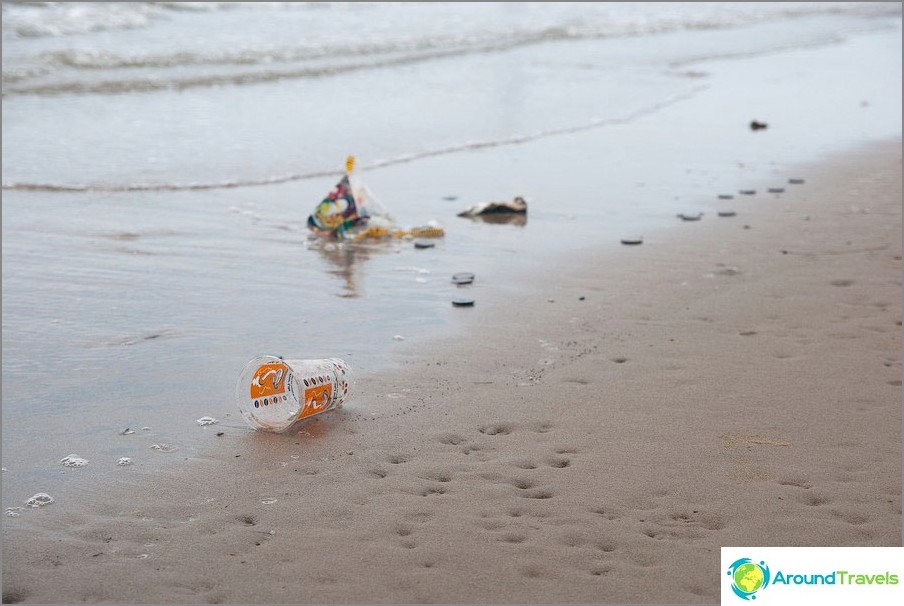 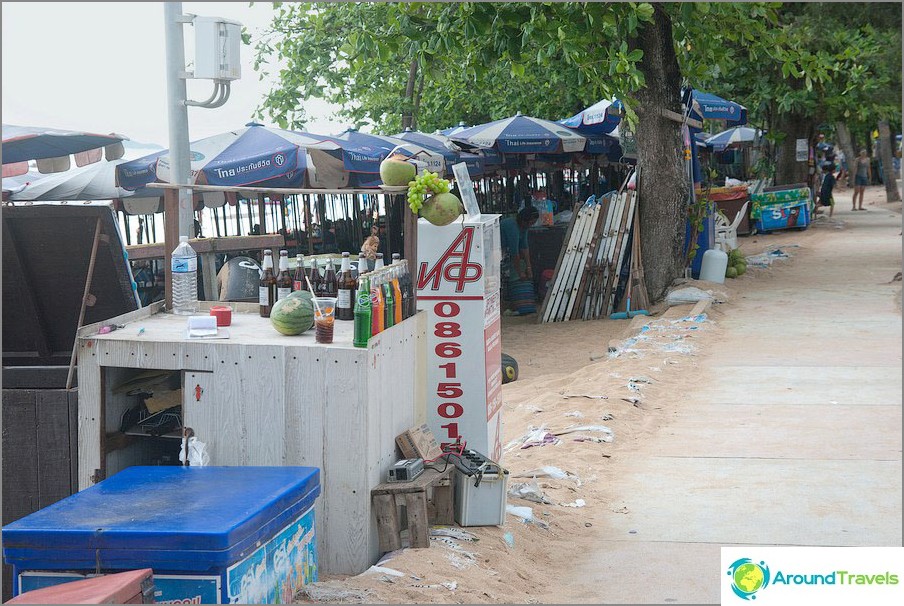 Drink trays between the beach and the sidewalk along the road

There are many small Thai shops, cafes, fruit stands, street laundries, etc. along the beach and on the jays (side streets). Everything you need for both short and long stays. In general, this area is loved for its convenience not only by tourists, but also by winterers and expats..

Approximately in the center of the beach there is a Night Market, although it is more aimed at tourists. There are also shops with tourist assortments around, many 7-Eleven and Family Mart chain stores, massage parlors and a tour. agencies. There are no large shopping centers in Jomtien, but getting to them by public transport (either to the center of Pattaya or to Sukhumvit) is not difficult..

Jomtien has probably the richest range of beach activities in Pattaya. Jet skis, banana rides, parasailing behind a boat, water skiing, windsurf, board rental, etc. You can even fly a hang glider. Jomtien is conveniently located, close to almost all the attractions of Pattaya.

Next door there is Pattaya Park water park with a tower, from where you can go down by cable car. Also nearby is Buddha Hill with an observation deck. Many different activities: paid fishing, jumping from a tower on a Bungy Jump and much more. In street travel agencies, you can inexpensively buy a tour to any attraction not only in Pattaya, but also in neighboring countries.

Along the beach, there is a huge variety of housing options ranging from bungalows and villages with expensive villas to multi-storey condos and hotels of different levels and price categories. In the north, closer to the center of Pattaya, Tappraya Street and Dongtan Beach, there are many tourists from Europe (Scandinavians, Germans, Italians), respectively, there are housing and a cafe, sharpened specifically for them, with the flags of the respective country on the facade. There are multi-storey large hotels along the entire beach.

And, of course, there are a lot of condos along the beach and in the interior of the area. On the first line, this is, for example, the multi-storey Jomtien Beach Condo and the new, but already beloved by Russian winterers and tourists, Lumpini Condo. There are also old, but affordable condominiums, which are also popular with both Russians and Europeans. In the area of ​​Bun Kanchan (Soi Wat Bun) and Chaapryk streets, there is a large selection of budget guesthouses and hotels. In the very south, the beach ends with the Sigma Resort Hotel, behind it begins the administrative district of Na Jomtien.

Finding Jomtien is not difficult, it is one of the main areas of the city. There is a road along the entire beach (Beach Rd). At a distance of about 400 m from the first beach road is the second (Second Beach Rd), which connects with the first numerous lanes, jays (soi) they are numbered from 1 to 19 from north to south. Sukhumvit Highway runs parallel to the coastline at a distance of 1.5 to 3.5 km from the beach and is connected to the Beach road by several large streets: Thepprasit in the north, Bun Kanchana (or Soi Wat Bun) and Chaiyapruek in the center and south.

The closest station to Jomtien, where buses from Bangkok and Suvarnabhumi Airport arrive, is located on Tappraya, near its intersection with Tepprazit Street. From there, the northern part of Jomtien is only 900 m away, you can easily walk or take a regular tuk-tuk. True, Jomtien itself is 5 km long, but tuk-tuk runs along the entire beach in both directions. If you arrived at the North Station or left on Sukhumvit, you can get to Jomtien by tuk-tuk through the city center with a transfer or take a taxi.

Thus, it is easy to get to Jomtien by your own transport and taxi from anywhere in the city. Since the beach is very long, you need to find out in advance which part of Jomtien you need. Taxi drivers, of course, know the city center quite well, if you are looking for a popular hotel or condo you shouldn't be in trouble.

Tuk-tuk runs back and forth along the beach road along the entire Jomtien Beach. They work both as a minibus and as a taxi, you have to ask. From the center of Pattaya to Jomtien, there are also regular tuk-tuk, departing from the intersection of South and Second Beach streets, at the corner near the school. This place is located 150 meters from Volkin Street, so it is not difficult to find. In addition, tuk-tuk runs along Tepprazit to Sukhumvit and back. On weekday mornings, you can go to Jomtien by tuk-tuk, which stand at the intersection of the Second Beach Road with Sukhumvit.