Lazarevskoye is a popular resort for summer holidays, and there are, in principle, a lot of hotels here, for every taste, including by the sea. Lazarevsky beaches are about 7 kilometers long. They are mainly covered with pebbles of medium and large size, from yellowish to dark gray. But at times there is also coarse sand in the form of small pebbles, closer to the water's edge..

In addition, on some well-developed beaches, there is loose sand behind a strip of pebbles. The width of the beach strip with pebbles is from several to a couple of tens of meters. Some beaches are separated by frequent small breakwaters and are bounded on the land side by concrete bumpers and a railroad bed. Beaches without vegetation, but often you can find plastic and wooden sun loungers with umbrellas, there are beach cafes.

If you want to choose a budget accommodation option, see my selection - Where is the best inexpensive stay in Lazarevskoye. But if you fundamentally live as close to the sea as possible, then you need this - Lazarevskoye hotels on the seashore.

Prices for hotels in Lazarevskoye, as well as in other resorts on the Black Sea coast of Krasnodar Territory, are very much higher in the season. In addition, cheaper numbers are quickly sorted out. The most expensive month is August. Below for each hotel is an approximate price per room in the summer season. The exact cost of the room for the dates you need is better to look at the links.

The sea in the season is often quiet, without waves, with a rapid increase in depth. Sandy beaches are usually popular with tourists. They look beautiful, they are pleasant to walk on and comfortable to lie on. But there are no sandy beaches in the vicinity of Lazarevskoye. But pebbles have a number of advantages: when the bottom is pebbly, the water in the sea is more transparent, walking on stones and lying on large pebbles is good for health, sand does not fly into the eyes and does not get stuffed into clothes and bags, it is interesting for children to play with stones of different sizes and shade.

The disadvantages of Lazarevskoye beaches are that they are crowded during the season, especially the Central Beach. But some hotels and boarding houses of Lazarevsky have their own fenced and often guarded beaches, which are not so crowded and noisy, and the water on them is usually cleaner. 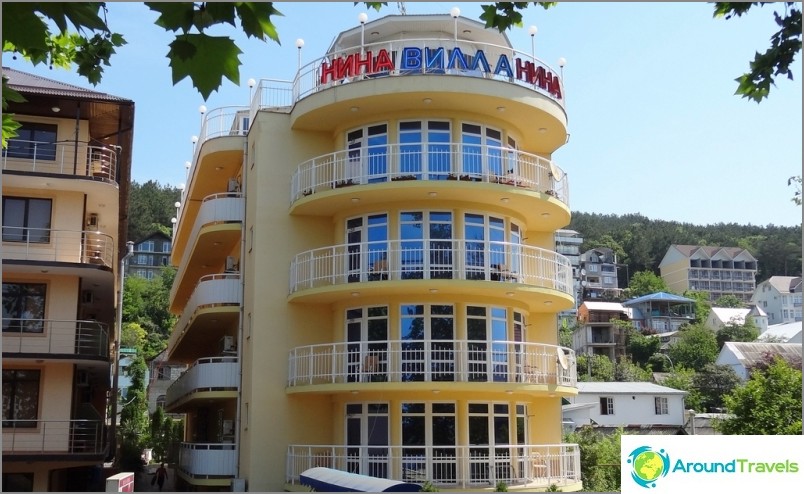 Villa Nina is a small and simple but pleasant and clean hotel located almost on the seashore. The rooms are quite spacious and tidy. The ground floor has its own dining room with reasonable prices. To get to the pebble beach with free sun loungers, you need to cross the railway track. The hotel is not in the center of the village, so there are not many people on the beach and in the evenings there is no music around it, like on the central embankment. The hotel does not have its own parking lot, but nearby you can find a paid guarded. 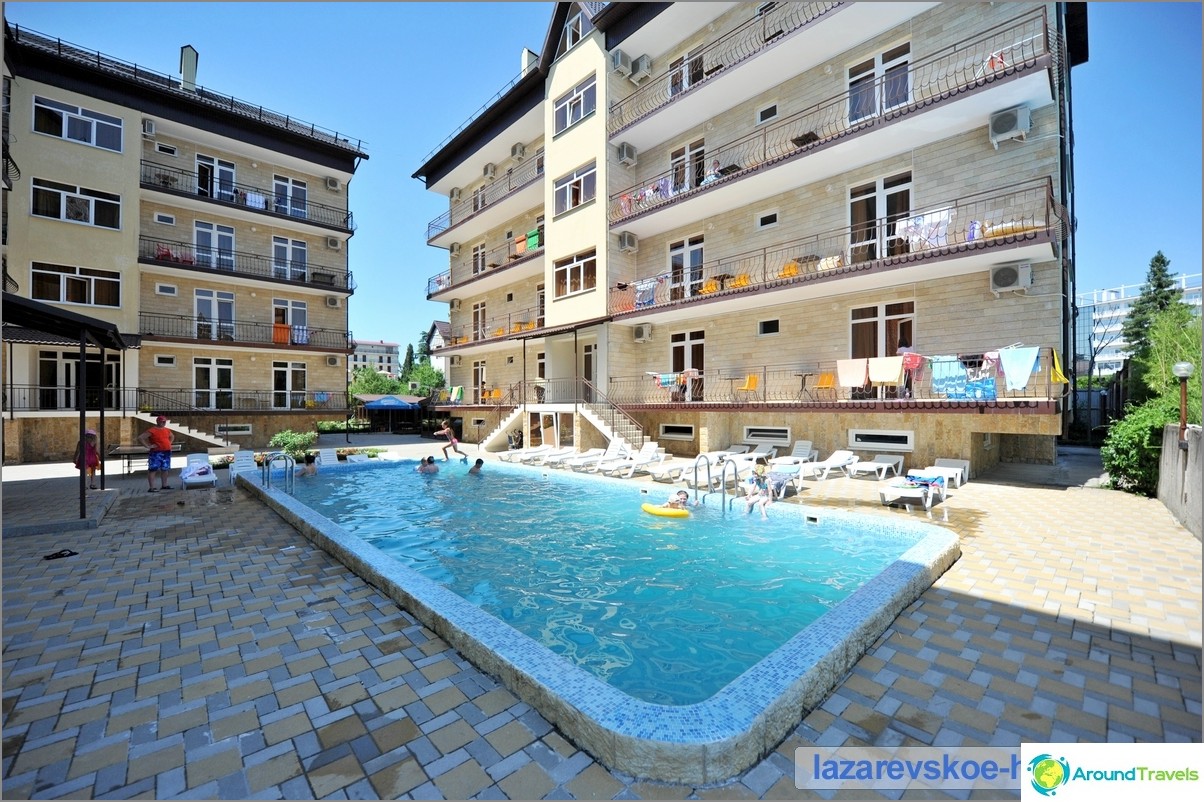 Red Carnation is a 3-star hotel. There is a private fenced equipped sandy-pebble beach 40 meters from the hotel buildings. There are beach activities. The hotel is in the center, near everything you need. The hotel itself is pretty neat and new, especially when compared to Soviet boarding houses. There is a pool. 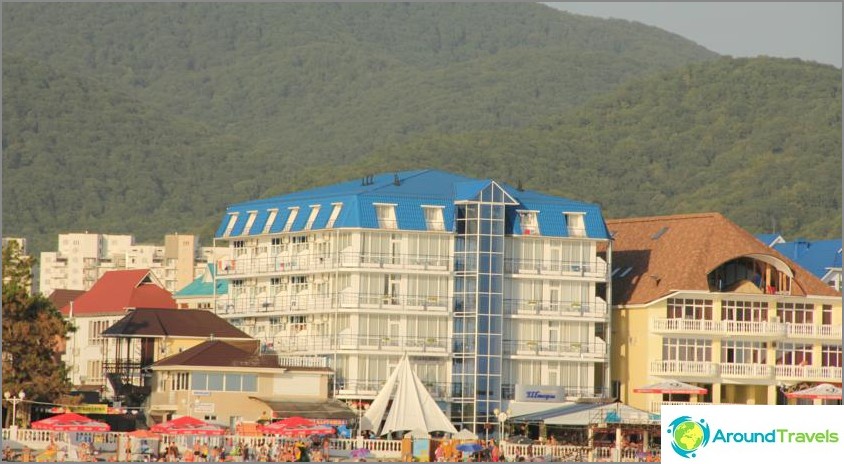 Storm is a good modern 3-star hotel with nice rooms. The advantage of the hotel is that it is located in the center of Lazarevskoye, right by the central embankment and practically on the beach, so that the rooms overlook the sea. Moreover, the hotel has its own pebble beach. Other pleasant options for guests: children's room and breakfast buffet. Of the minuses - some neglect of plumbing in the rooms, noisy discos right under the windows at night, a small selection of dishes for breakfast. 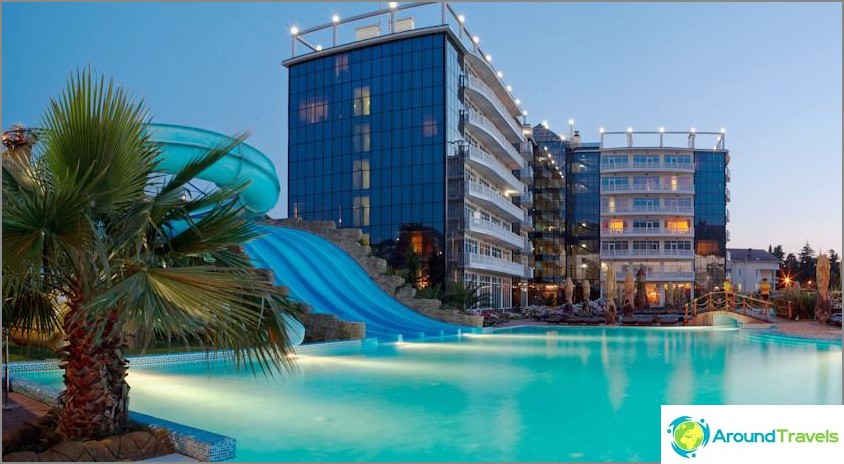 Cost: from 4000 rubles per day for a double room

The four-star Prometheus Club hotel is located in the central part of Lazarevskoye and has its own equipped small-pebble beach. Good infrastructure, landscaped area, swimming pools are available for hotel guests. 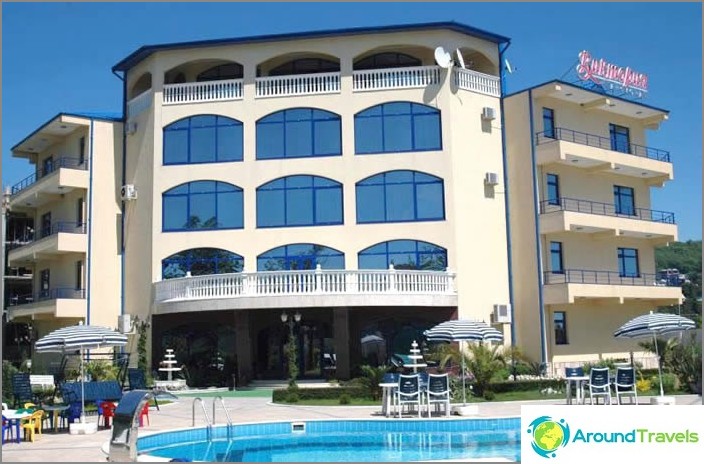 Pension Victoria-Otdykh 4 stars, located on the outskirts of Lazarevskoye, near the sea. Has its own equipped beach with small pebbles. The guesthouse also has a swimming pool, cafe and bar. Overall, this is a good modern hotel complex with comfortable rooms. Not a bad place for a quiet family vacation, pleasant green area and clear sea next door.

Boarding houses where rooms can be booked on the spot

Some hotels in Lazarevskoye cannot be booked through popular online booking systems. These are mainly old Soviet boarding houses, inexpensive, but not being modernized for a long time. Rooms in these guesthouses can be booked either through special services, or by phone, or on site in the old fashioned way. However, these pensions have their own beach. 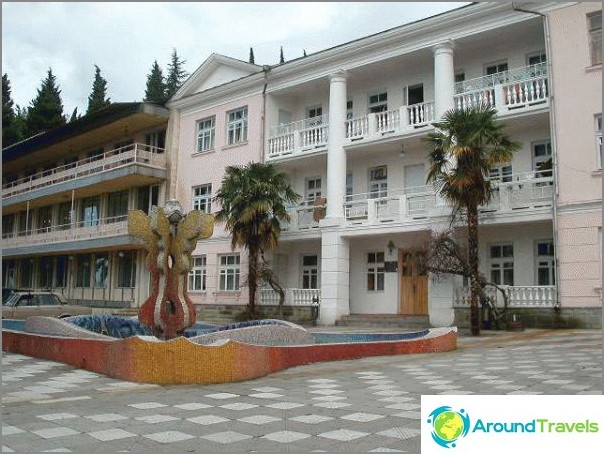 Cost: from 790 rubles per day for a double room

A small, quiet boarding house, absolutely Soviet in terms of service and general appearance. It is located far beyond the Lazarevskoye line (towards Sochi), next to the seashore. The beach of the sanatorium is pebble, equipped with showers, sun loungers. Rooms - with partial conveniences. Both the building and the territory have not changed since Soviet times. 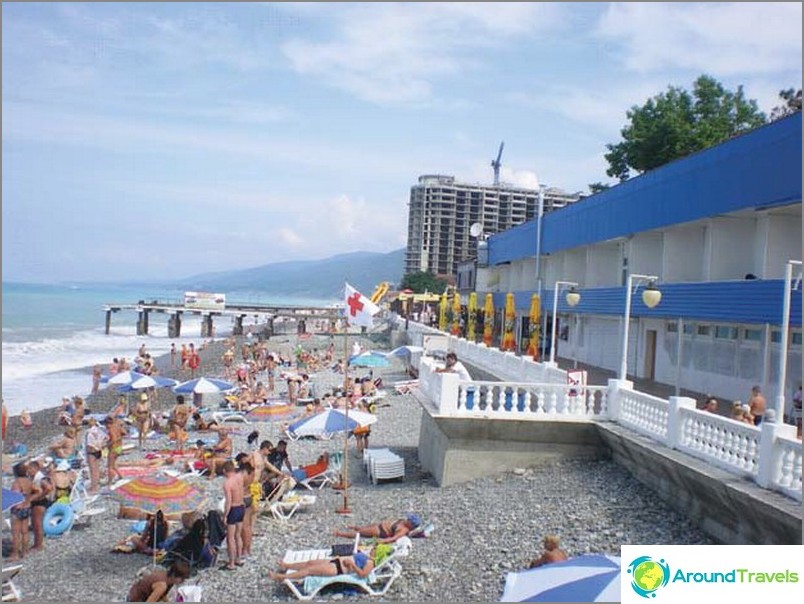 Cost: from 900 rubles per day for a double room 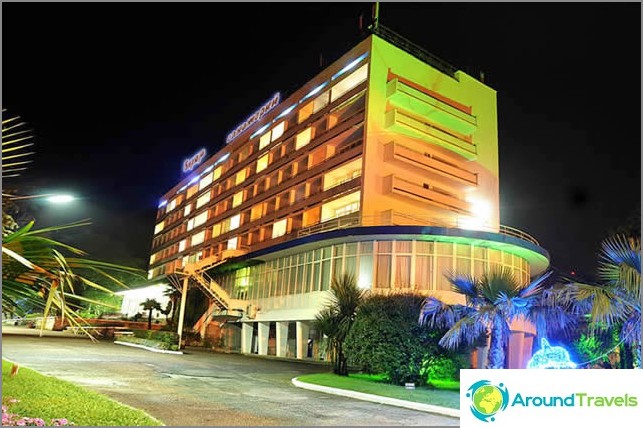 The sanatorium has two buildings, medical procedures are available. However, the level is rather Soviet. The beach is a 5-minute walk through an underground passage under the road. The beach is small, pebbly. Not always clean, but the infrastructure is pretty good. The sanatorium has a nice park, the location is convenient - next to the train station. 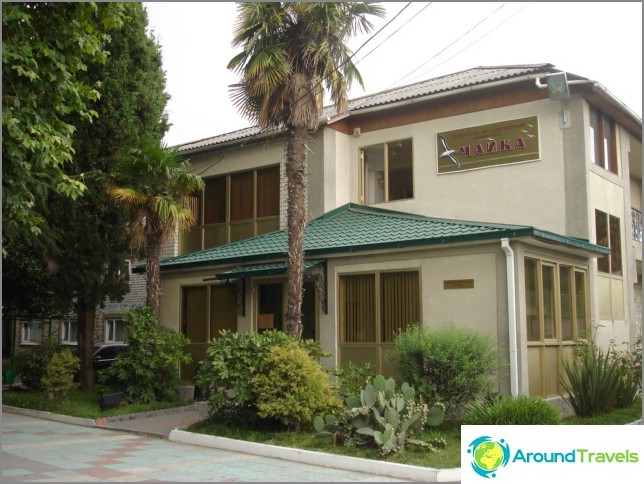 Cost: from 1200 rubles per day for a double room 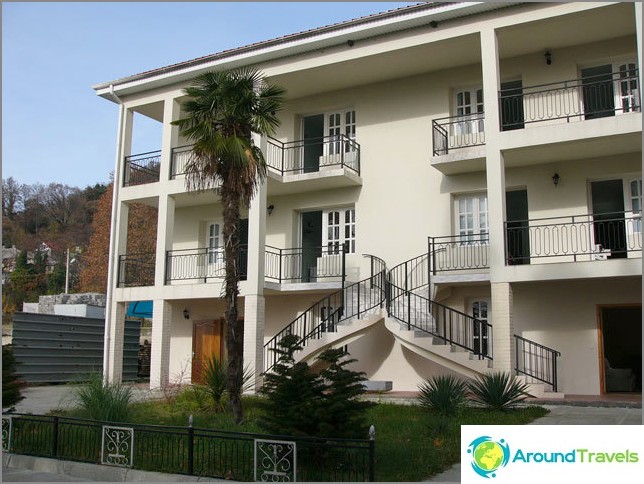 Cost: from 7500 rubles per person per day

The boarding house is located in the village of Ashe, a few kilometers from Lazarevskoye. A couple of buildings with amenities on the floor, detached houses, a canteen and a cafe with rather high prices are modest Soviet conveniences in modern realities. A pebble beach with the necessary infrastructure is located a couple of hundred meters from the buildings.