Home › New articles › Mobile communications in Thailand - which SIM card to choose, how to call Russia

Mobile communications in Thailand - which SIM card to choose, how to call Russia

In Thailand, everything is quite simple with mobile communications. There is no problem to buy a SIM card for a foreigner. You just come and buy right at the airport. The procedure takes a few minutes. Next, connect the Internet package, voila, and you are online. Internet in Tae will cost you less with a local SIM card than through Russian operators with their roaming options.

Which Thai operator to choose

There are several mobile operators in Thailand:

All calls and Internet tariffs are the same plus or minus. Prepare about 300-800 baht for internet per month.

I most often use DTAC, it is the easiest way to figure out the tariffs (for the same True, the devil will break his leg on their website). Also, AIS sometimes travels with me as a second SIM, although I would not say that there is an urgent need for this. Buy a local Thai SIM card in advance on the Klook website (for Bangkok and for Phuket) and get 4G internet for 8 days for just 131 baht instead of 299 baht.

The coverage areas are similar too. But I personally feel that the coverage and speed of the DTAC and AIS is generally better than the True. But it all depends on the specific area. No matter how much I traveled around Tay, there was 4G / 3G almost everywhere, maybe except for remote mountainous areas. That is, if you are not going to climb somewhere, then by and large it does not matter what kind of SIM card you will have.

Also, if you need speed, as much as possible (for example, for work), then no one bothers to buy all 3 SIM cards at once and test them in your rented home, who is faster. 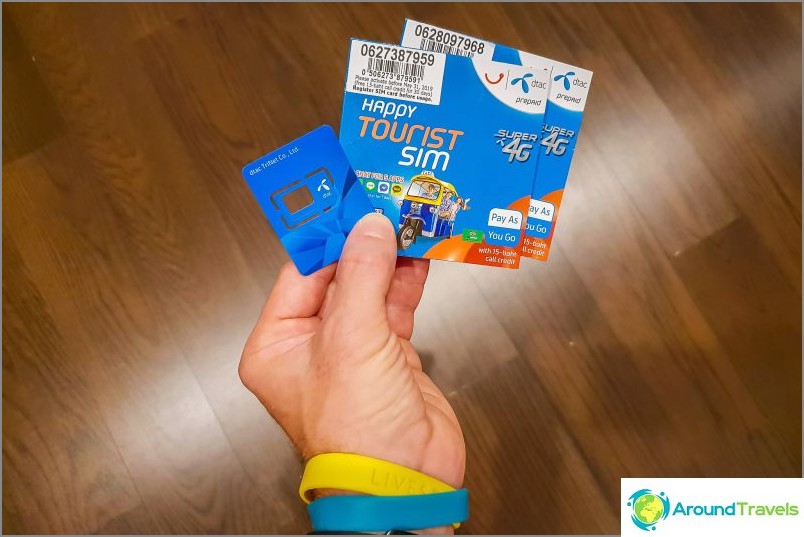 Why am I all this. Do not listen if someone says that some operator is much better than another, it all depends on the specific place.

How to get internet on a laptop

All modern smartphones have an option such as «access point». By turning it on, your phone turns into a router that distributes WIFI. Naturally, you must have a SIM card with the Internet, which the smartphone will distribute to laptops within range. So USB modems are no longer needed for a long time..

None of the Thai operators prohibit the distribution of the Internet to computers, so you can use it. This is especially true if the WIFI in the hotel is too slow (this often happens).

Call charges in Thailand and roaming

Not a single Thai operator has roaming around the country, which is very convenient when traveling. So you can forget about roaming.

If you do not connect anything else, then calls will cost about 1 baht / min. If you intend to make a lot of calls, then it makes sense to connect special tariffs for calls.

You have two options on how to call Russia with a Thai SIM card:

But in general, it is cheaper to call from Viber / Skype to Russian phones via the Internet. Or completely free if you call from one Skype to another Skype, via Viber, Whatsapp or Telegram. 4G / 3G mobile internet is more than enough for such calls. Yes, in this case we pay for traffic, but it's a penny. Feels like Skype spends the most traffic.

More about, how to make cheap calls from abroad to Russia.

How to call a Thai number from Russia

So that you can call him from another Thai SIM card, you don't need to invent anything, just dial it like that.

But if they want to call him from Russia or write an SMS from a Russian number, then you need to write it down in the international format, replacing 0 with +66, thus it will turn out
+(66) 914683217.

If you somewhere you have come across reviews about the slow speed of mobile Internet, then it may well be that either the authors of these reviews just have old smartphones, or they climbed into some fart, or do not understand the issue.

Every year the internet in Thailand is getting faster and faster. Even the outgoing channels are already normal, and not as before, it is quite possible to use the clouds. I have been going to Thai since 2010 and I see improvement trends. Yes, on the mainland, and especially in Bangkok, the speed and stability are much better than on the islands, but everywhere the Internet quality is enough for most users.

My speed on the incoming channel is at least 5-15 megabits, and in the city center it happens even 30-50 megabits. Of course, provided that 4G / 3G is working.

Below are a couple of speeds taken anywhere.

4G speed in Bangkok from DTAC