Kuala Lumpur airport and how to get to the city

Kuala Lumpur International Airport consists of two terminals: KLIA and KLIA 2. They are located nearby, two kilometers from each other. Flights of all low-cost airlines depart and arrive at the new terminal KLIA 2 (the LCCT terminal, which used to serve low-cost airlines, is no longer engaged in passenger traffic). The most famous low-cost airline in Asia, AirAsia, flies in KLIA 2, as well as other low-cost airlines: Malindo Airways, Lion Air, Tiger Airways and Cebu Pacific Airways. Now KLIA2 is the world's largest low-cost terminal and a large hub, modern and comfortable.

Terminals KLIA and KLIA2 are connected by a railway line, on which trains KLIA Express and KLIA Transit run. You can get from one terminal to another in 3-5 minutes and 2 ringits.

Arrival and departure from KL airport

If you are arriving on a regular international flight, most likely it will be the KLIA terminal, which has a main building and Satellite terminal A, to which aircraft dock; these two structures are connected by train - Aerotrain. The KLIA main terminal building has five levels. Arrivals hall - on the third level, Departures hall - on the fifth.

Low-cost airlines' flights arrive at Terminal KLIA 2. The third level of the terminal is the Departure Hall, the second level is the Arrival Hall and train express trains, the first level is the bus station and the order of official taxis.

How to get from Kuala Lumpur airport to the city

On the KLIA Express and KLIA Transit trains, you can get from both terminals to the city center, KL Sentral station. The railway line starts at KLIA 2, goes to KLIA and further to the city.

In KLIA 2, trains leave from Level 2. The KLIA Express train leaves every 15-20 minutes, goes non-stop from the airport terminals to KL Sentral, on the way 33 minutes (3 minutes between terminals). Trains run from 5 am to 1 am.

The KLIA transit train leaves every 20-30 minutes. The first train from KLIA 2 at 6 am, the last at 1 am, takes about 40 minutes, goes to the KL Sentral station. It makes three stops along the way: Bandar Tasik Selatan, Putrajaya & Cyberjaya and Salak Tinggi.

Train timetables, ticket prices and other information can be viewed on the official website of the KLIA 2 terminal.

Trains are quite expensive, more expensive than a bus - 55 ringit. But the trains go faster.

Kuala Lumpur (and other destinations) from KLIA and KLIA 2 can be reached by bus.

From the second terminal, buses leave every 15 minutes from the first level (Level 1). The ticket costs from 10 ringits. Buses run into the city to KL Sentral and Puduraya stations. You can go not only to the center of Kuala Lumpur, but also to other cities of Malaysia: Malacca, Johor Bahru, Ipoh, etc..

Star Shuttle - goes to Padu Sentral station through both airport terminals. The journey takes about an hour. The ticket costs 9 ringit;

SkyBus - goes to KL Sentral. The journey takes about 50 minutes. The ticket costs 8 ringit. If you fly to AirAsia and buy a ticket from their website, you can immediately order a bus ticket, then it will cost 7 ringits. On the bus, you just need to show an e-ticket with the booking number.

Full up-to-date information on buses can be viewed on the official website of the KLIA 2 terminal. 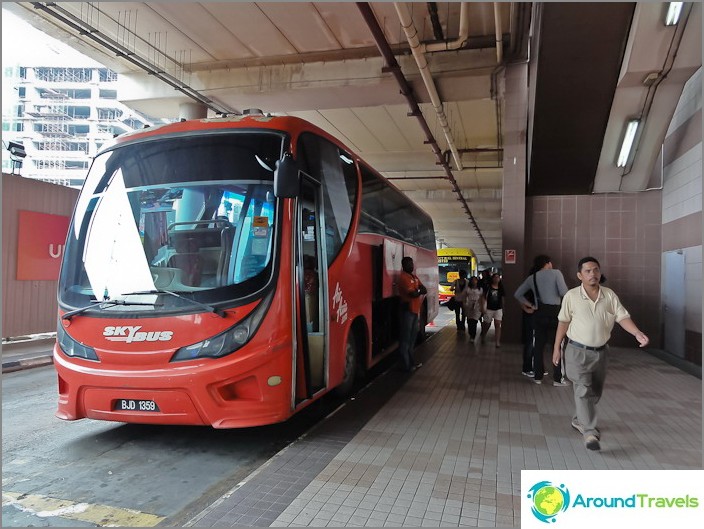 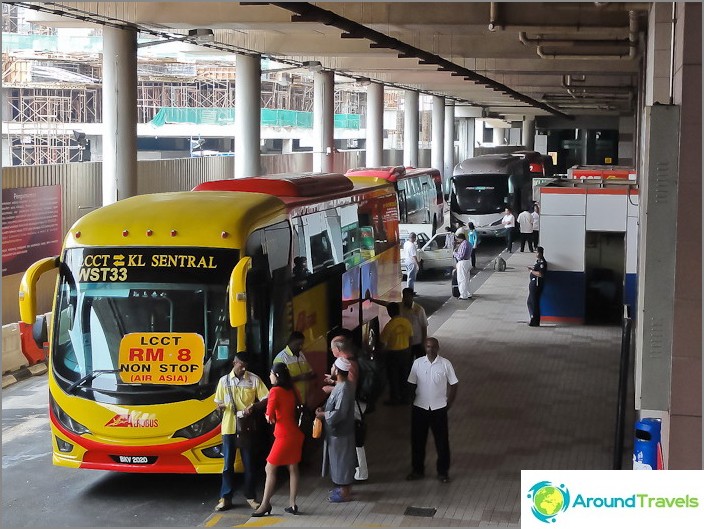 If you arrive at night or need to quickly and comfortably get to the city, you can take a taxi. Uber operates in Kuala Lumpur. You can also take an official taxi - Airport Limo taxi. The cost of the trip is fixed, the order must be made at the counters, paid there..

Anyone who wants a minimum of body movements can order a transfer to Kiwitaxi via the Internet in advance. You will be met in the arrivals hall, picked up your luggage, put you in the car and taken to the right place. The method is good because there are no problems at all, but it costs the same as a regular taxi. I recommend!

Road to the city

The road is very picturesque and picturesque - you go, stare around, take a break from the flight. Palm trees are growing everywhere and cottage villages are being built. Although sometimes huts are found, apparently from the times when Malaysia was not such a developed country. 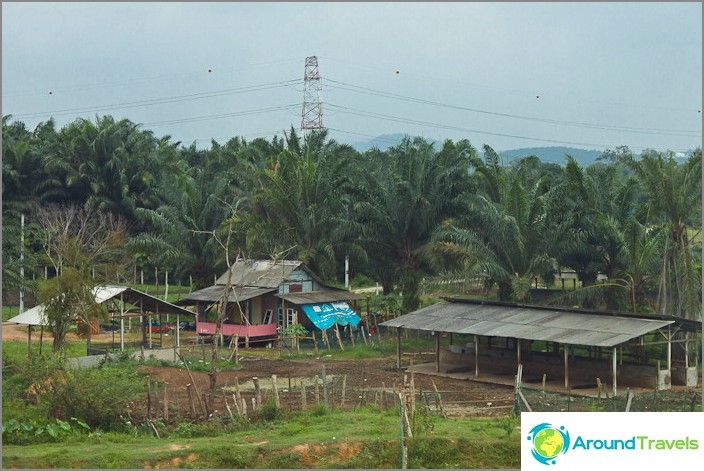 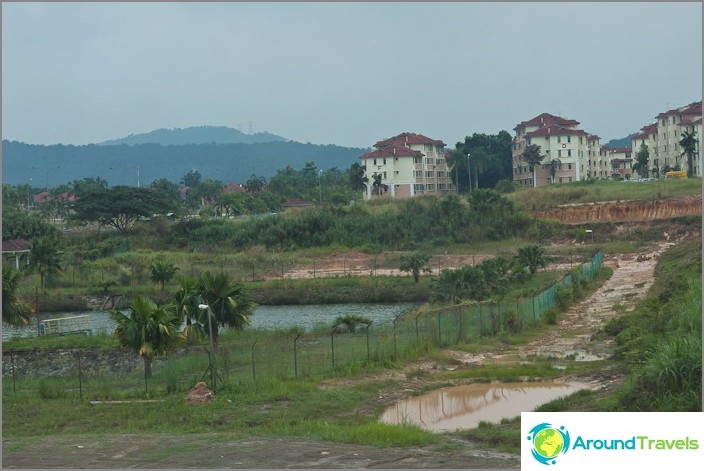 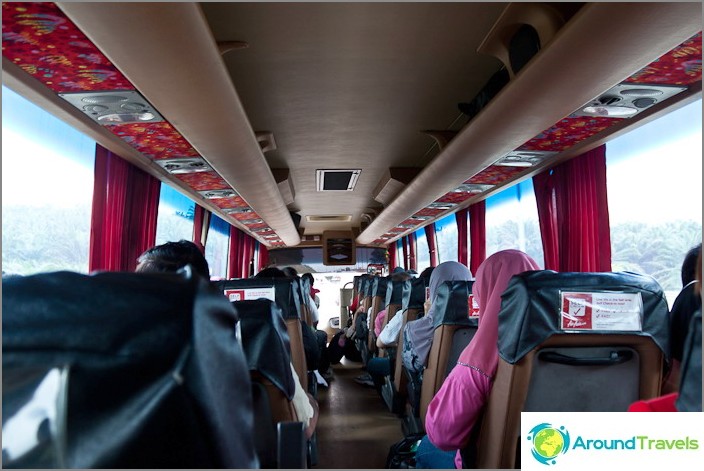 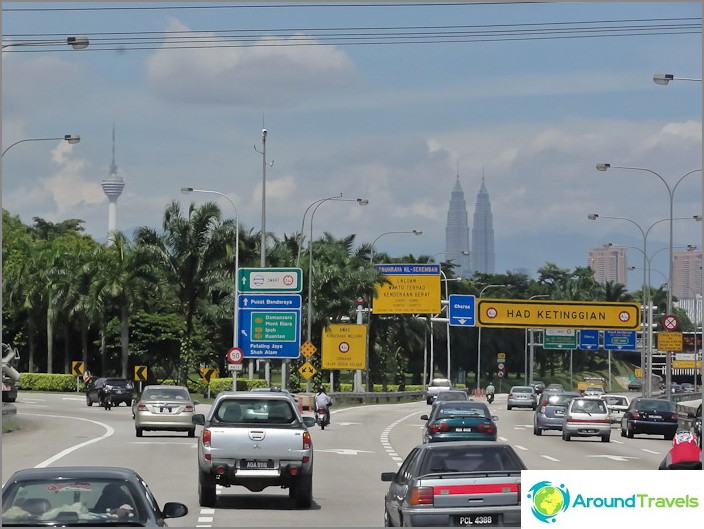 We are approaching KL Sentral