Ao Nang Beach - the best and most popular in Krabi

Ao Nang is one of the most popular and tourist beaches in Krabi province. This is not a bounty beach, but the atmosphere here is inviting. Backpackers, tourists and longsteers alike will find something pleasant for themselves here. There are fewer Russian tourists here than in Phuket. Basically, Ao Nang is chosen for vacation by Europeans, retirement age or families with children. There are also many Asian tourists here..

In the evenings, stunning sunsets are shown on Ao Nang Beach. At this time, the beach just becomes very wide due to the low tide, so a lot of people can sit on the sand (everyone is walking). Yes, Ao Nang beach is crowded, in the mornings, at high tide, when the strip of sand becomes rather narrow, there is nowhere for an apple to fall in season. But the edges of the beach are quieter and you can always find a place to stay.

This is one of the most popular beaches in Krabi province and probably the most popular resort center. The beach is one and a half kilometers long. Approximately in the middle, a motor road abuts against it perpendicularly, the main road leading to this village from the highway. Further, the road turns right and goes to Nopparat Thara beach.

There is a pedestrian promenade along this road and the beach, and there are also numerous cafes, restaurants, hotels, shops and other tourist infrastructure. This part of the beach is bounded by concrete, to the sea from the embankment you have to go down the stairs.

If you turn left, you will come to a rock, at the foot of which a small river flows into the sea. There is a path along the rocks to the beach of the Centara Hotel, which everyone calls the Monkey Trail. In that area, there are green broadleaf trees, plenty of natural shade, in which numerous masseuses sit with mattresses. There are also beach cafes with cocktails, where tourists gather at sunset.

Another feature is that there are rows of longtail boats in the water near the beach - with long noses. And they always scurry past the beach back and forth, roaring motors on the move. All of these boats take tourists to the islands and nearby beaches such as Reilly, inaccessible from land.

By the way, Railay is in the TOP and is considered one of the most beautiful beaches in Thailand. Although I wrote that the Ao Nang beach is the best, but I meant that in terms of infrastructure and beauty (the rest of the beaches, in my opinion, are worse in these parameters), but in terms of beauty, Railay is indisputably among the leaders..

The beach has a very pronounced low tide, which is often in the afternoon. At low tide, the sea goes very, very far, for several hundred meters, a silty gray bottom is exposed. Those who see the beach at low tide consider it unrepeatable..

At high tide, the beach becomes narrower, and the sea is deeper and cleaner. In general, the type of beach also depends on the season. Out of season, in summer, there are strong waves on the sea, and the water is dirty. The sea looks better in season and at high tide.

The depth of the sea near the beach, even at high tide, is not very large and grows smoothly. At the end (on the left, if you look at the sea), where the Monkey trail and alley with massage are located, the sea is shallower and a stinking river flows into it. It is better not to swim in the place where this river flows into the sea..

The sand on the beach is gray and gray-yellow, rather light. Interspersed with silt and large placers of broken shells, turned by the sea.

There are no sun loungers on the Ao Nang beach. As elsewhere in Krabi. But there is a shadow - natural, from trees. Especially in the morning. On the left edge of the beach (if you stand facing the sea) there are more trees and, accordingly, there are more shadows. In the central part, the embankment hangs over the beach and trees grow along the road, and wide steps descend to the beach through equal segments. 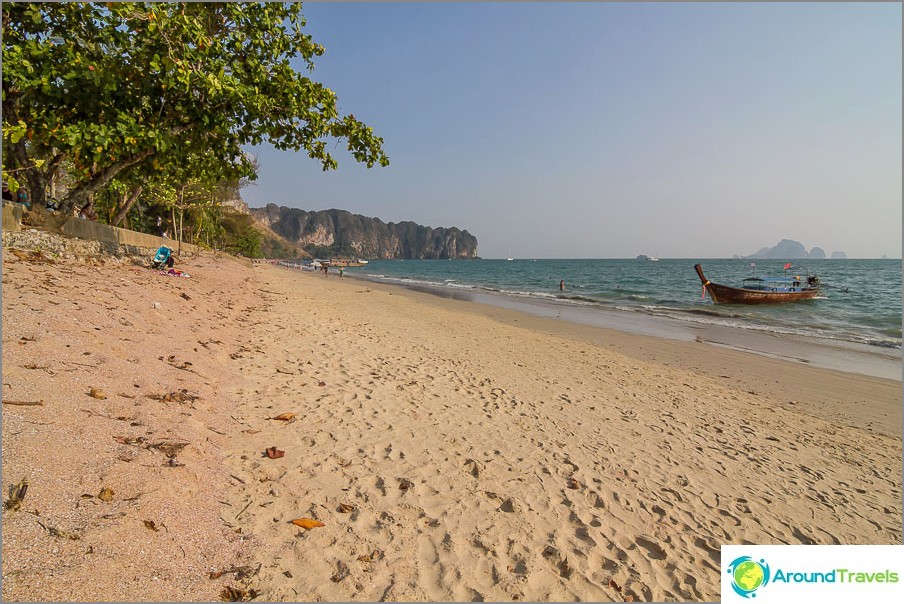 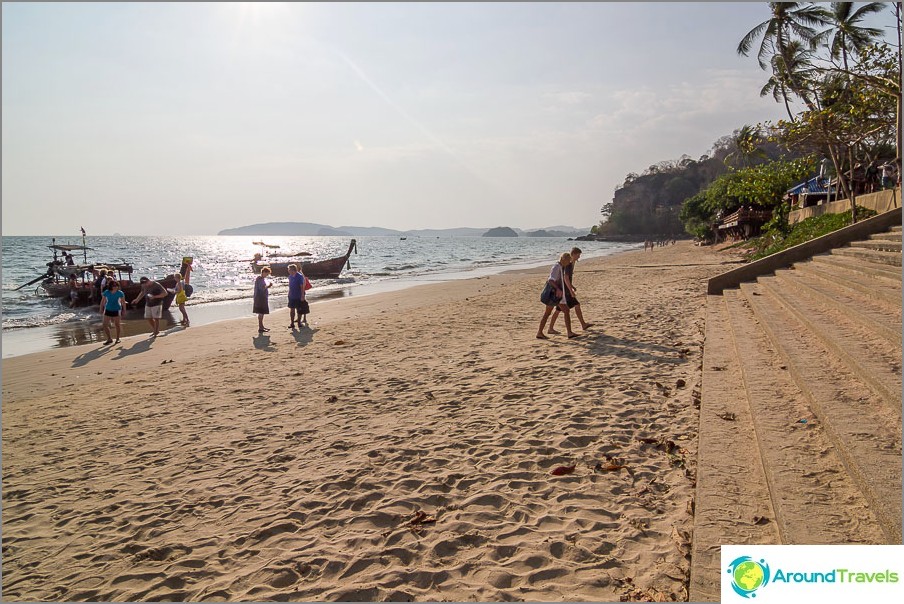 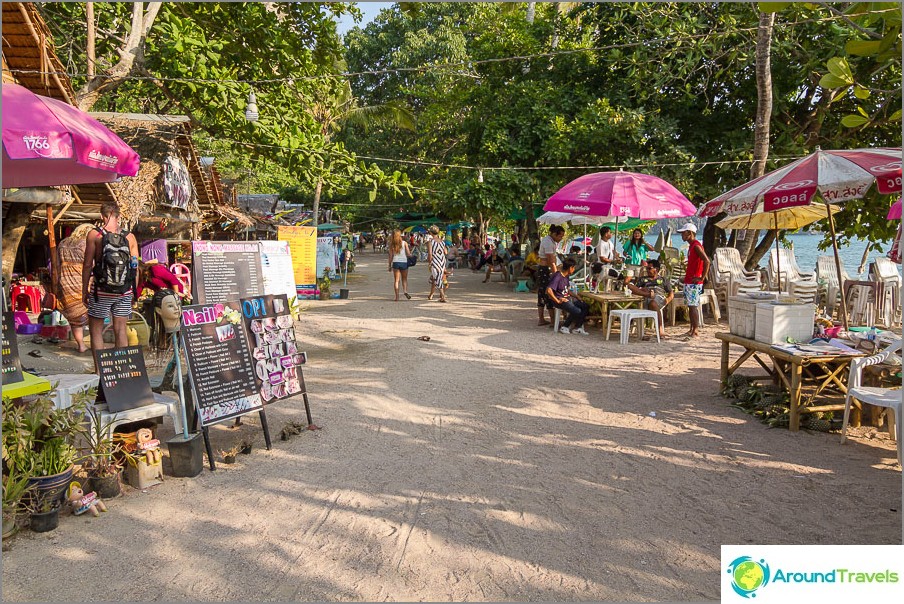 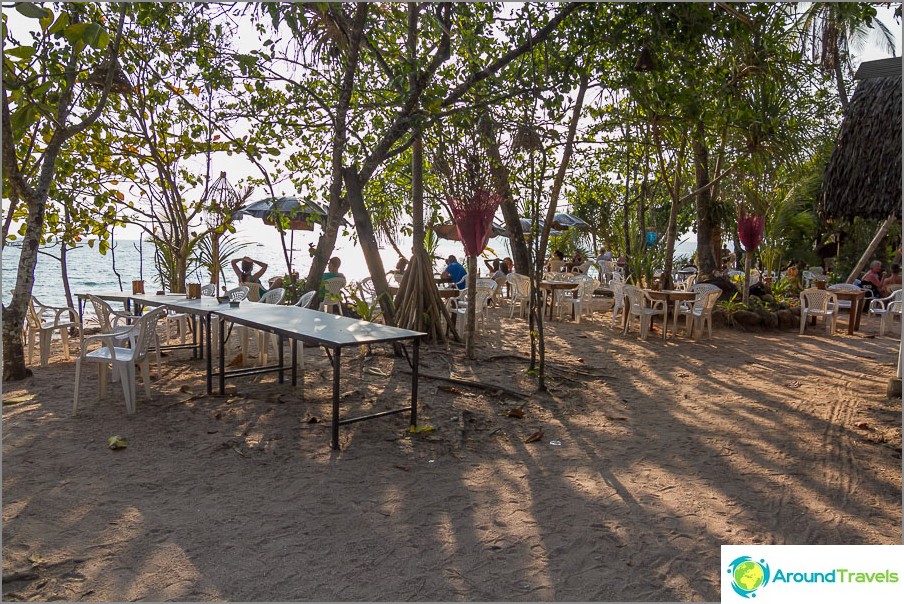 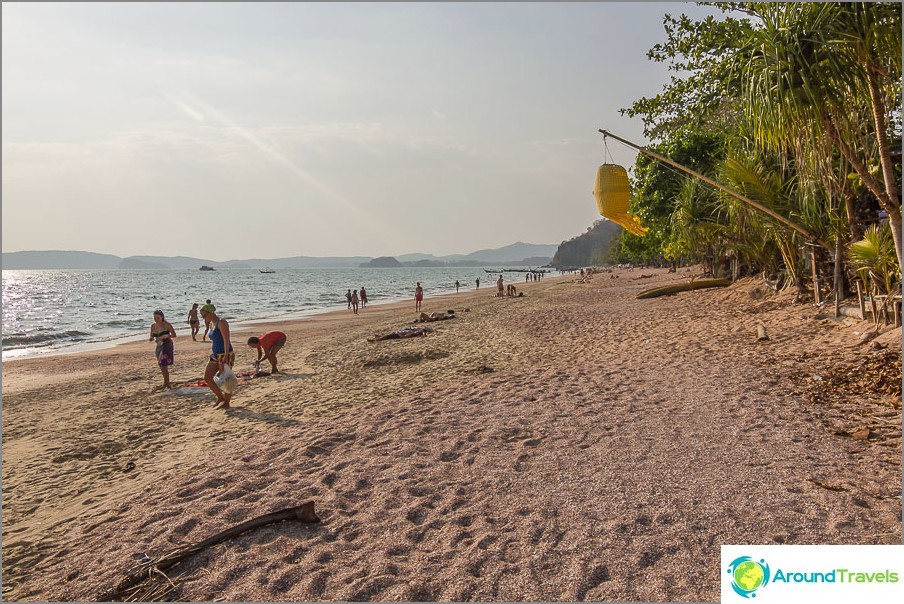 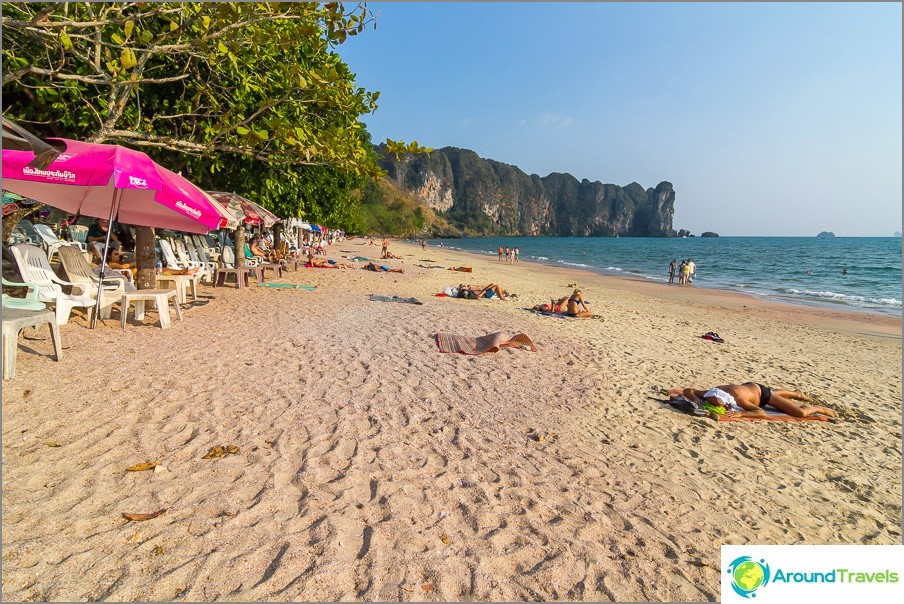 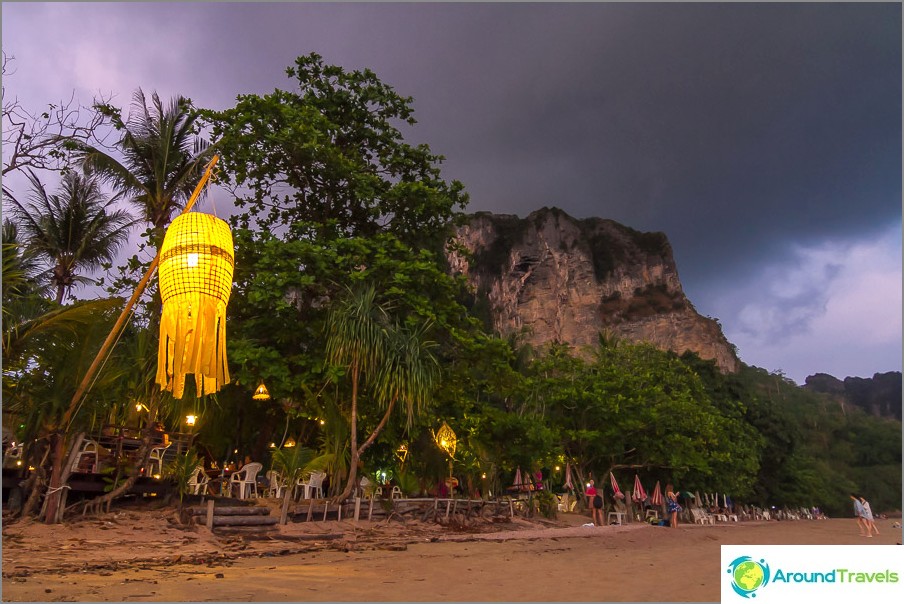 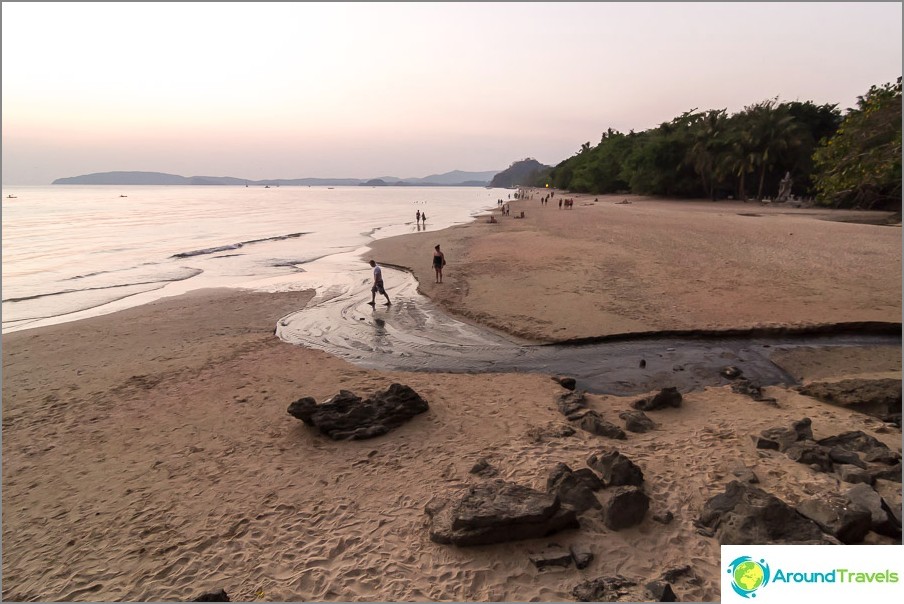 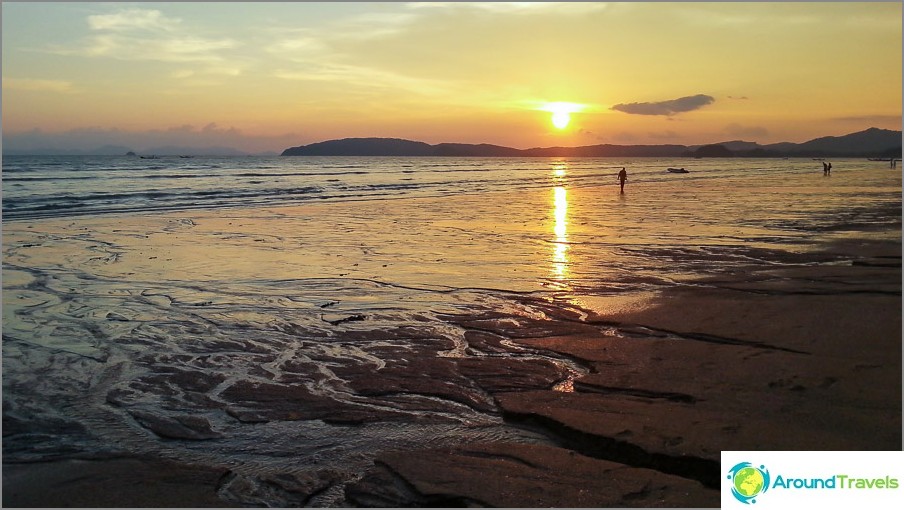 Among the attractions of the beach itself, the Monkey Trail can be called - this is a path from boardwalks located at one end of the beach, leading along the mountain to another beach. Notable for the fact that large flocks of monkeys live around it.

On the way to the monkey trail, there is a shady alley with massage parlors and café bars. The place is quieter than in the middle of the beach and more intimate. It's good to meet the sunset here.

At the opposite end of the trail from the Monkey trail, there is a concrete platform under the cliff, where there are usually few people, and during sunset you can sit comfortably with a picnic and a beautiful view.

Ao Nang has a huge number of shops, cafes, restaurants for every taste. There is seafood, local cuisine, European and even McDonald's with Starbucks. There are exchangers, banks, travel agencies, dive centers and other things a tourist needs..

There is a medium-sized Tesco Lotus on the main road 20 minutes walk away. And a little further away, practically on the outskirts of the city, there is Makro. However, if something is missing, you will need a large shopping center, everything is in Krabi Town, just 30 minutes by car.

There are a lot of hotels in the beach area, for almost every taste and budget. From the simplest and cheapest guesthouses to beach resorts. There are large hotels on the first line (along the edges of the beach), there are also some distance from the sea. A large number of guesthouses are located along the main street of Ao Nang, which leads to the sea.

The main tourist infrastructure of the resort is concentrated there. In front of the cape, the territory of the Krabi Resort is adjacent to the beach. On the other side of the beach, almost on the first line are Aonang Villa Resort and Golden Beach Resort .

Most of the houses for rent are located in Ao Nang. But, unfortunately, there is nothing on the first or second line, as there are hotels. The nearest houses are located in the area of ​​the mosque, that is, somewhere 15-20 minutes on foot.

Several condos are also at roughly the same distance. If you do not get attached to walking distance to the sea, then the choice of housing is quite large, there are many houses in the vicinity of Ao Nang, from where by car or bike you can reach the beach in literally 10 minutes.

The beach is about 30 km from the airport (about half an hour's drive). From there, regular buses run to Ao Nang. You can also take a taxi. For more information about the airport in Krabi and how to get from it to Ao Nang, read my article - Krabi airport.

Songthaew, Thai minibuses go from Krabi town to Ao Nang. From nearby islands (including Phuket, Ko Lanta and Phi Phi), you can reach Ao Nang by boats, including scheduled ships.