On the Pratamnak hill is the most popular observation deck of Pattaya, from where all those photographs of the city, which are so many on the Internet and on advertising booklets, were taken: with the arc of the bay stretching into the distance, boats in the azure water and dense high-rise buildings on the coast. This is the main viewpoint of Pattaya, which offers the best view both on a clear sunny day and in the evening, when the city below is colored with many lights reflecting in the dark water of the bay..

In addition to the observation deck in this place on the hill, there is also a small temple Wat Khao Phra Bat, a street coffee house with the best views of the city, souvenir shops and shops, a tower with radio antennas and a monument to the admiral and representative of the Thai royal family Krom Luang Jumborn Khet Udomsakdi, who has done a lot for the development of the Thai Navy.

The majestic statue of Admiral Krom stands at the highest point in Pattaya and is surrounded by military-themed items. Thais have great respect for the admiral and venerate him as a saint, bringing flowers and incense to the statue, as in temples.

It is forbidden to smoke, bring food and drinks in the territory adjacent to the monument. That is, the rules are almost the same as for a temple, and this must be taken into account. The platform in front of the monument faces the sea and is made in the form of a ship's bow. There are benches and binoculars, and the view opens to both the city center and the Pratumnak area, with the outlines of Koh Lan in the distance.

In addition to the area around the monument, which is closed at night, there is also an absolutely free area for visiting with handrails and benches next to the parking lot, you can come there around the clock. In the same place, around, there are the main shops, cafes, a gazebo and a temple.. 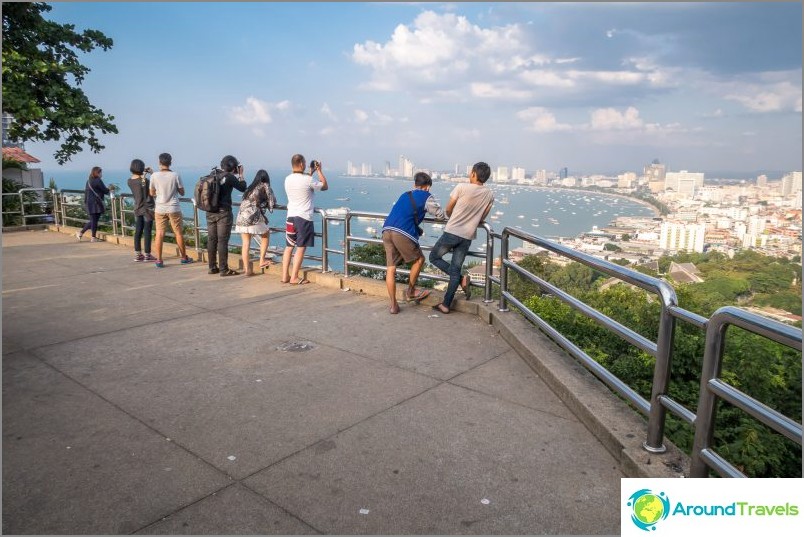 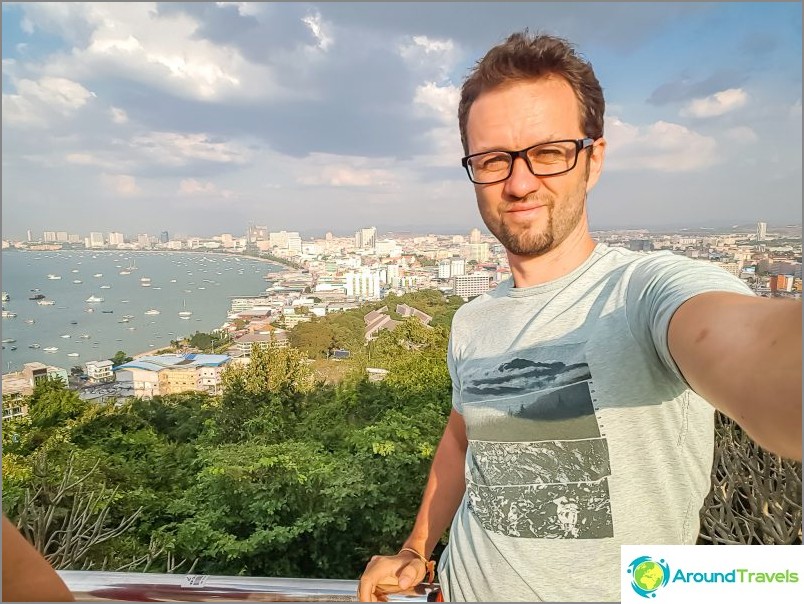 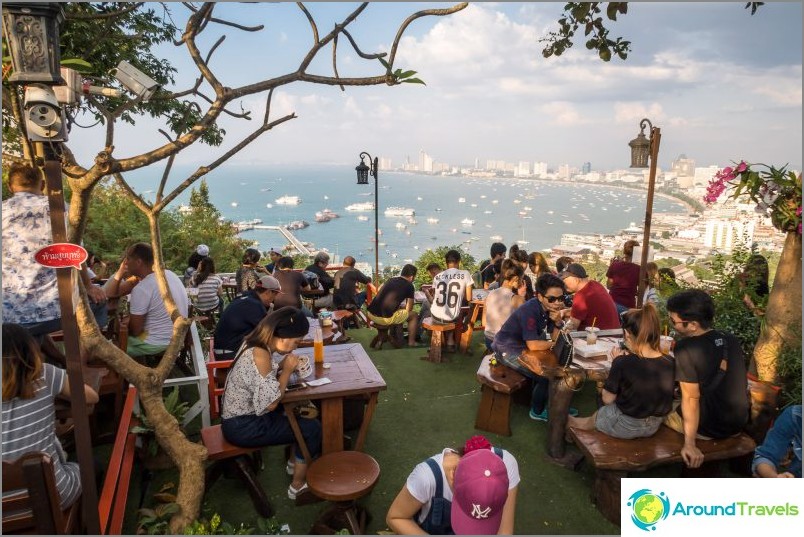 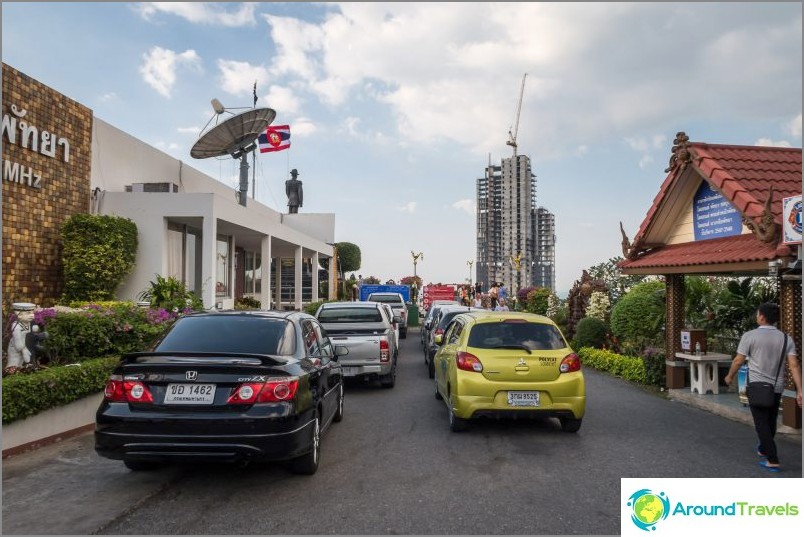 Parking at the radio station and entrance to the observation deck 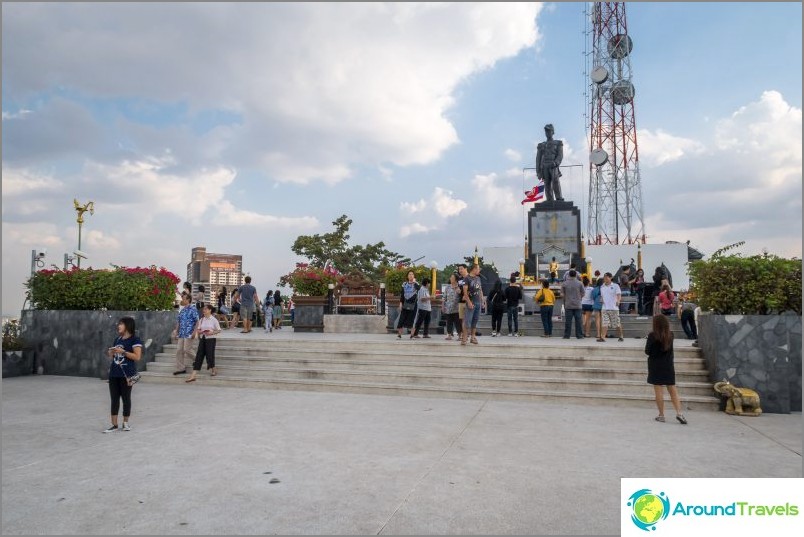 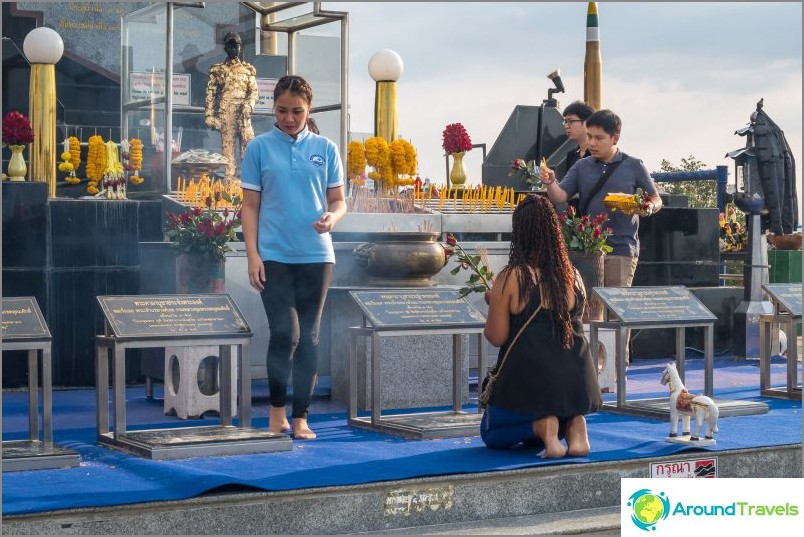 At the monument to Admiral Krom 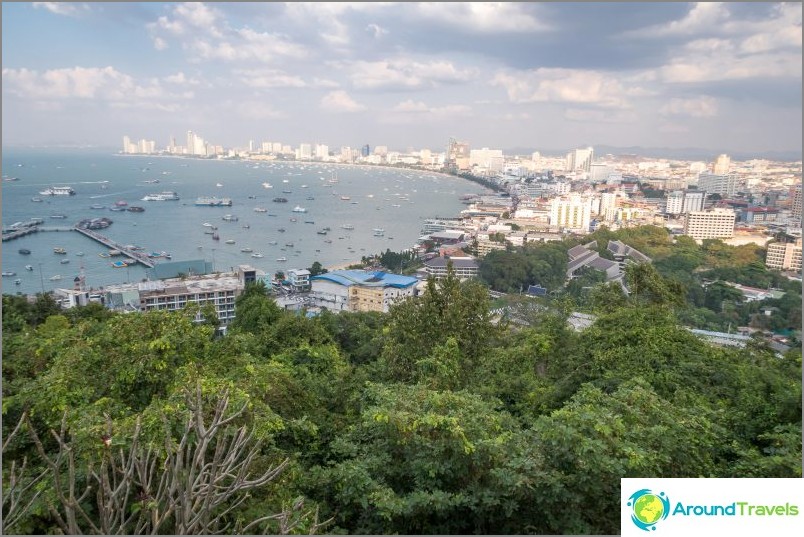 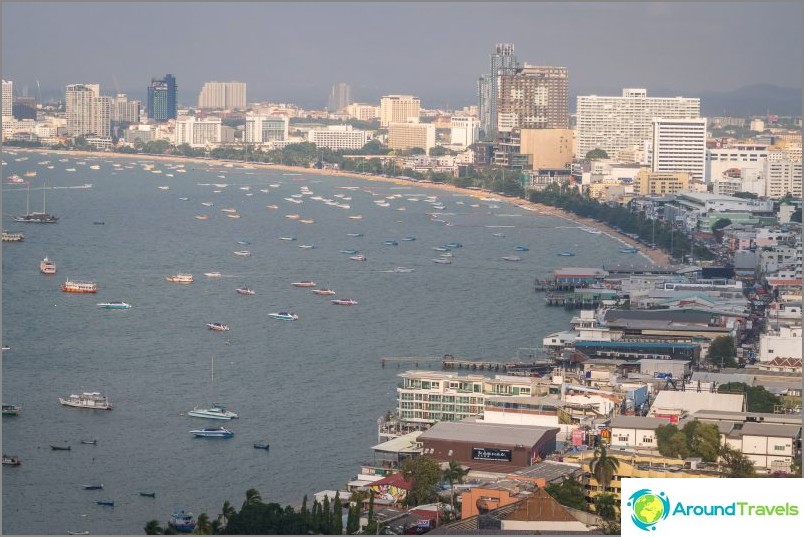 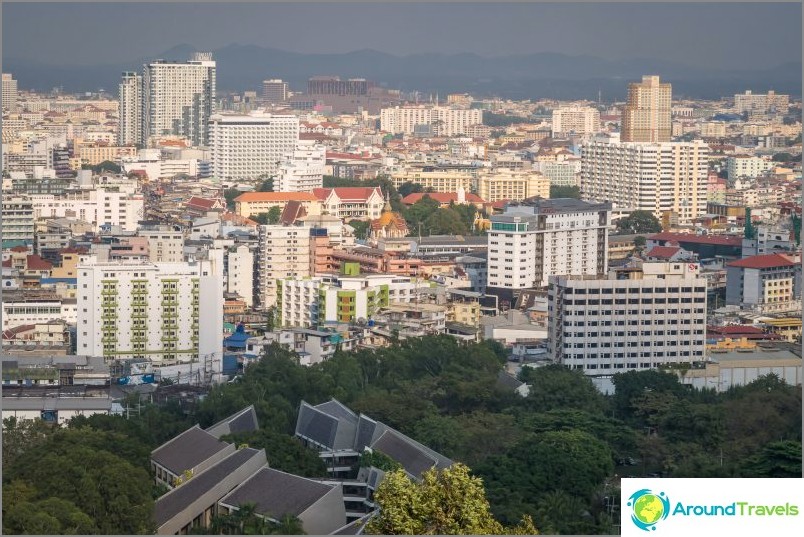 View of the city center from the observation deck 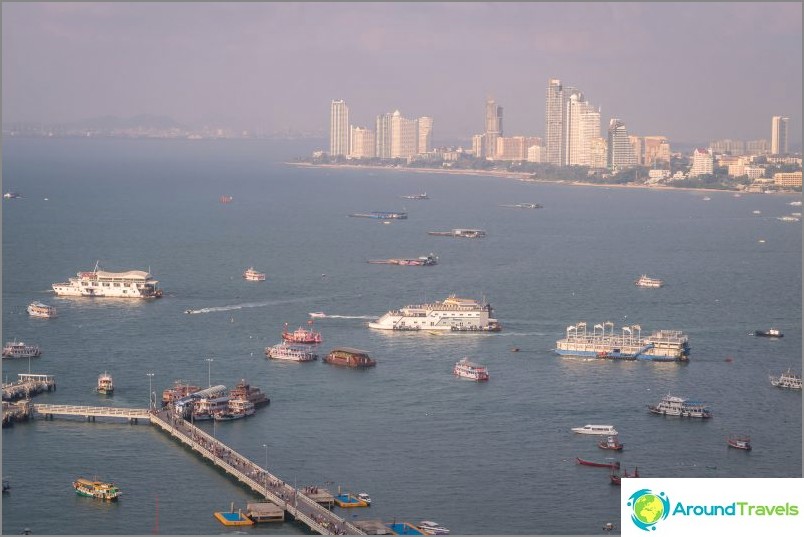 It is better to climb to the observation deck in good clear weather, so the photos will turn out to be more colorful. In the morning, the lighting is good for capturing beautiful views with azure water, and in the evenings, you can watch the sunsets from the viewpoint. Immediately after sunset, Pattaya below lights up with millions of lights and this is also a worthy sight. I specially came 2 times, in the afternoon and after dark. 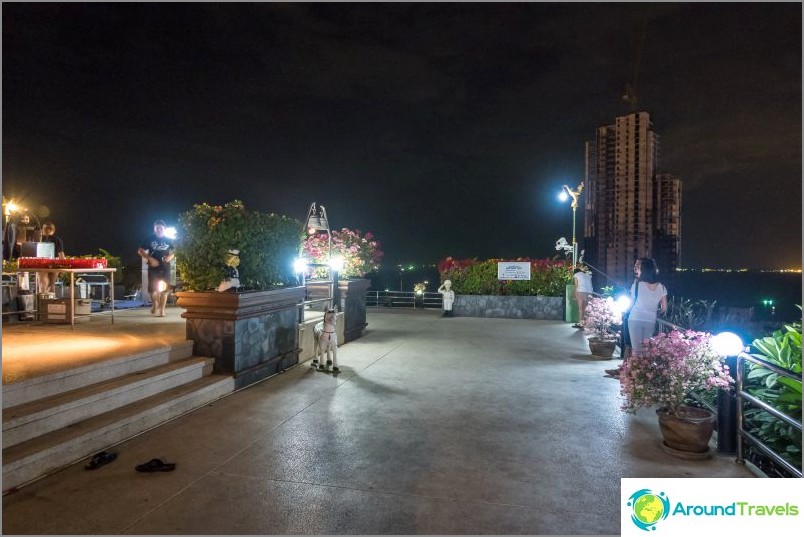 Observation deck in the evening 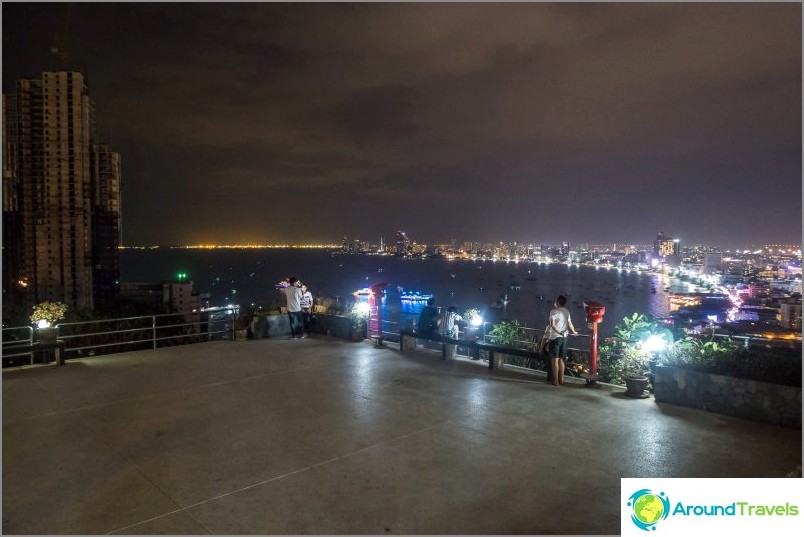 Evening view of the city from the observation deck 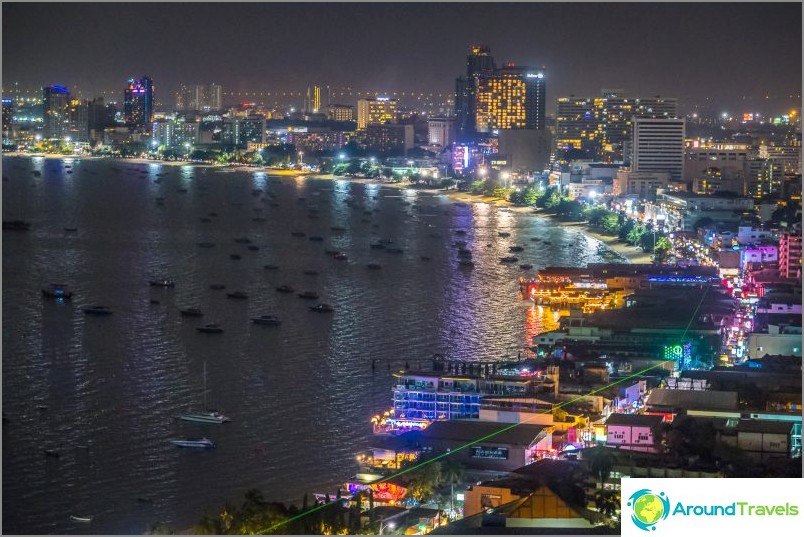 View from the observation deck to Pattaya 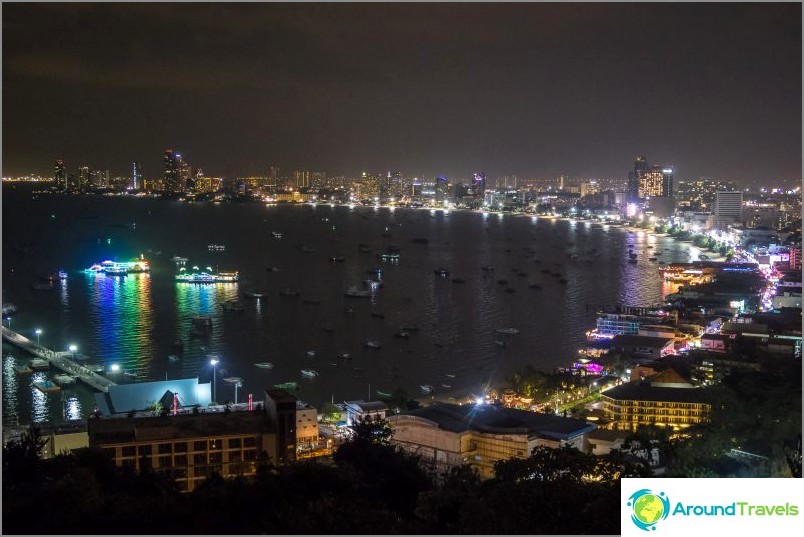 Temple near the lookout

The small traditional Buddhist temple Wat Khao Phra Bat next to the observation deck is a quiet and lovely place. Many dogs, cats and even chickens roam inside the temple grounds. They all live at the temple, they are fed and looked after there. On the territory there are benches under the trees, many statues of Buddhas in different poses and small traditional for Thailand figurines of roosters - they symbolize the military spirit and nobility. 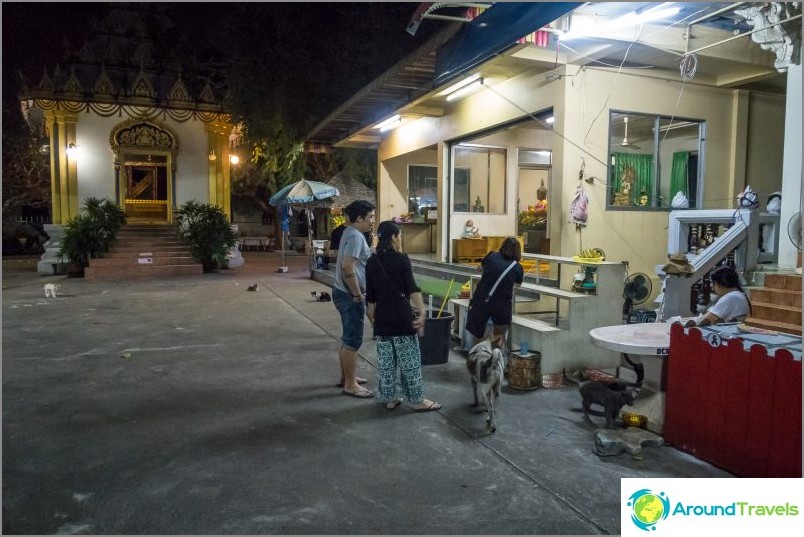 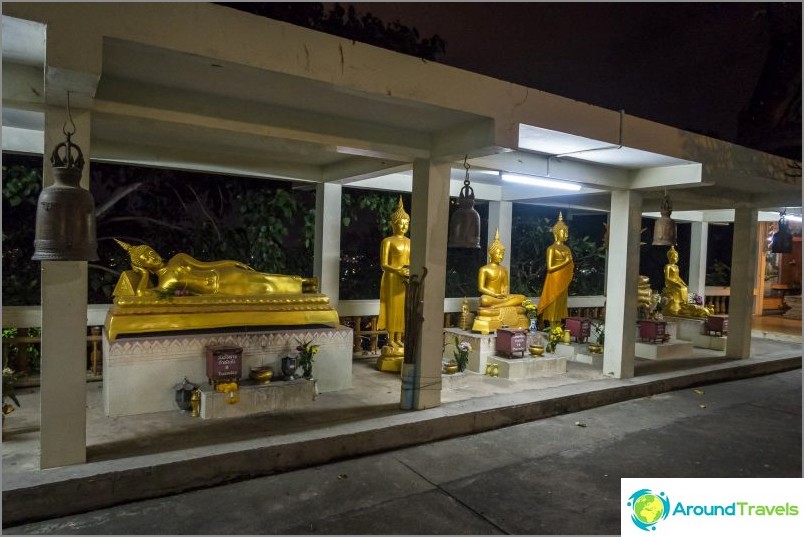 Opening hours: around the clock. In addition to the site where the monument is erected, it is open from 7:30 to 21:00.

The observation deck is often part of the Pattaya sightseeing tour. You can take it to quickly see several places in the city. It usually costs about 300-500 baht, depending on what is included.

Public transport does not go to the observation deck, so you can get there either by transport, your own or rented, by taxi or on foot. You can climb the hill either from the Pratumnak area, or from the central part of Pattaya. One road from the center goes up the hill, from the Bali Hai pier, through the large letters PATTAYA and the lighthouse, and you can go on the other side, past the go-kart, to the police station between the two tops of the hill. On one of them, far from the sea, there will be a temple with a statue of the Golden Buddha and a Chinese temple, and on the other there will be an observation deck with a monument to Admiral Krom.

Across the road from the police station, at the bottom of the hill, there is a parking lot for large tourist buses and three lanes go up quite steeply. It is better to go on the very right, it is with a sidewalk, rather short and quickly leads to a small parking lot at the temple and the observation deck.

Parking the bike is not a problem, there is always a place. It is better to park the car on the way, still on the rise. When you go, you will see they are standing in a row. Because further, at the very top, there are very few parking spaces for cars. Well, or at the lowest parking lot, leave where the tour buses are. 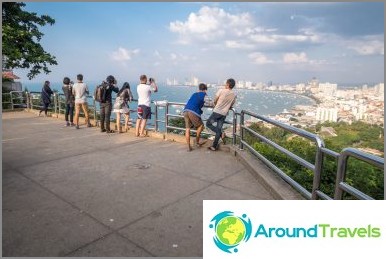 Good observation deck overlooking the city. Does not close at night.Read More.