The Dancing House is a great observation deck in Prague

A must-see place in Prague, one of the best and most interesting sights in the city. The building is located in the center, easily accessible by any means of transport. Plus, not far from it there is an embankment of the Vltava River. Actually, this geography made the view from the roof of the Dancing House one of the best panoramas in Prague..

The original plans, according to which the Dancing House was supposed to perform the functions of an art gallery, library and cultural center as a whole, were not destined to come true. The house is now a business center, with a bunch of offices, an expensive bar and an observation deck. Admission to the observation deck is conditionally free - pay 100 CZK or order a drink (there are also 65 CZK).

The bar, of course, is not cheap, so a drink + dessert does not fit into one hundred crowns. But you have an official reason to sit at a table with a beautiful view of the city's rooftops. In the evening, it is quite difficult to take good pictures through glass - it glares and reflects. But sunset hours are the most beautiful to visit this attraction..

The restaurant on the 7th floor was closed for a private evening, but I managed to take a picture of the menu. There are only 9 tables in the bar on the 8th floor, on weekends it is better not to meddle, there are a lot of people. But people do not sit straight for hours, you can wait for a table, I only waited 10 minutes. 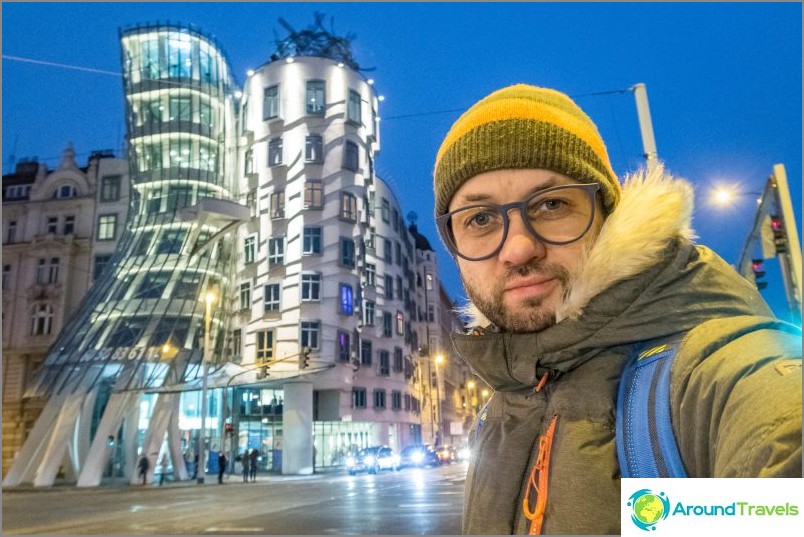 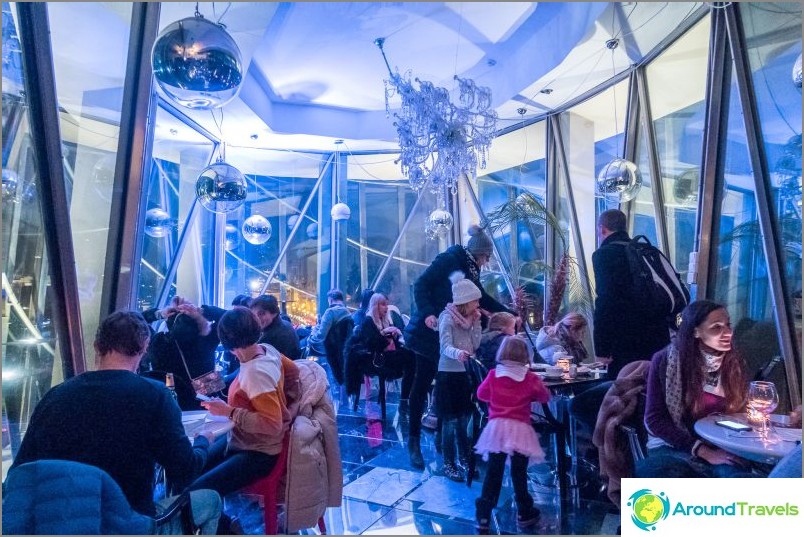 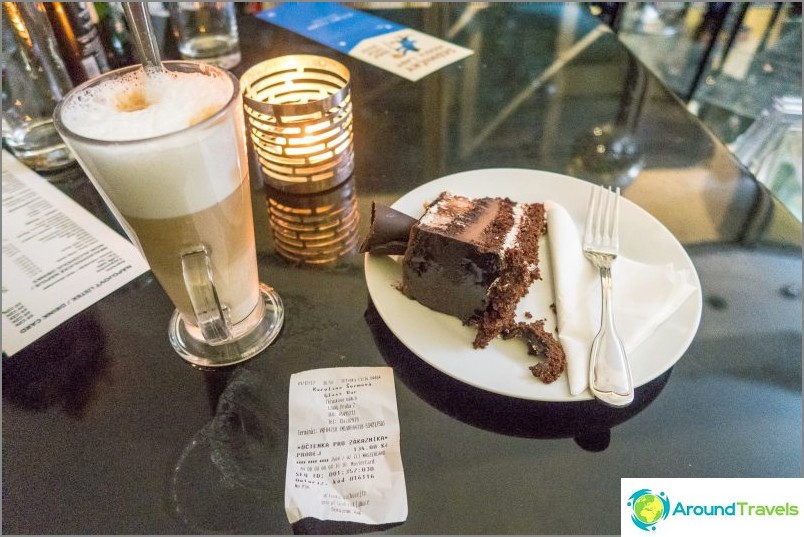 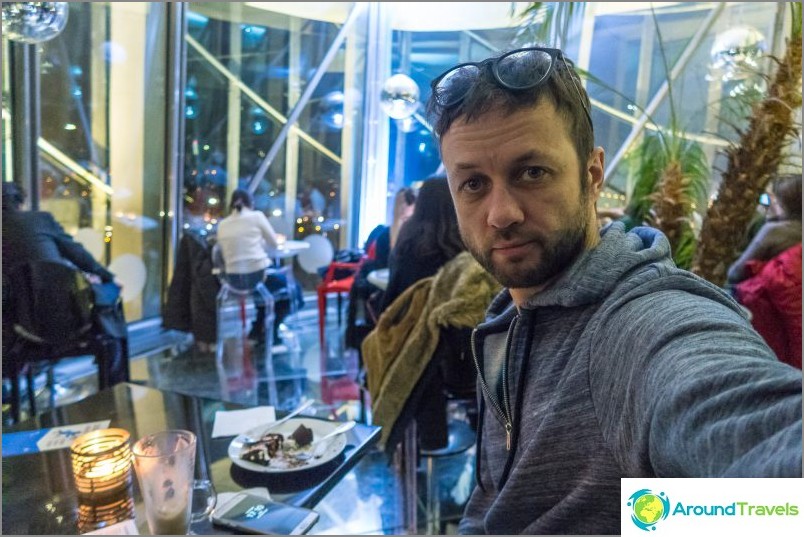 The bar only has drinks and sweets. Entry to the street viewing point 100 CZK or a drink. I thought so that I just needed something sweet (16-17 hours), paid 134 crowns for a Latte and a piece of chocolate cake, pleasant and healthy. Both coffee and cake were ok.

I don’t know if anyone pays 100 CZK separately for the viewing room, if coffee / beer costs 60-70 CZK and wine 100 CZK. It's better to take the drink right away. As a result, it is generally inexpensive, because usually the observation deck costs about 150 kroons, as, for example, on the Petrin Tower.

There is a view only from 3-4 tables, which are often occupied. But the view is also not quite downright ideal. There is a second glass and there are iron beams that block the view. But the Prague Castle is clearly visible, yes. And yet - too low for an observation deck. From the outside lookout, the view is much better, and there is where to sit, but in winter - the wind and dubak.

By the way, when I left, people thinned out and even free tables appeared. In general, everything is as usual when I go to the viewpoint: either the weather is deteriorating, or some other cataclysm. 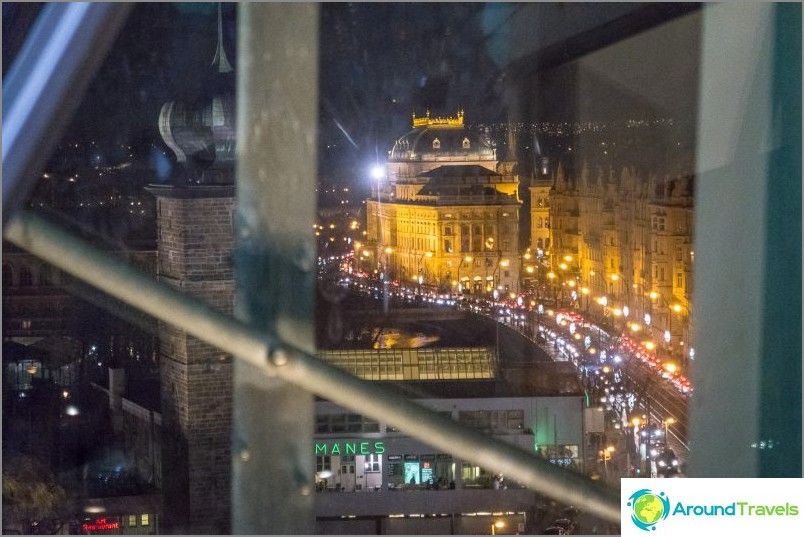 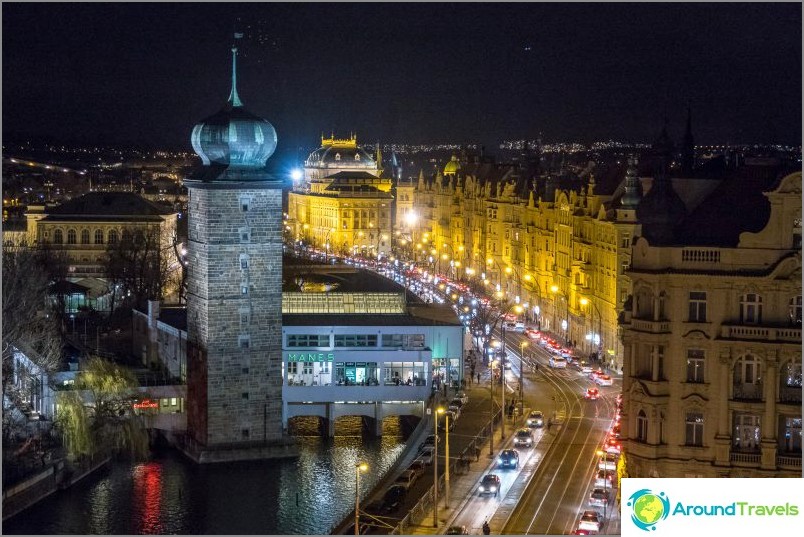 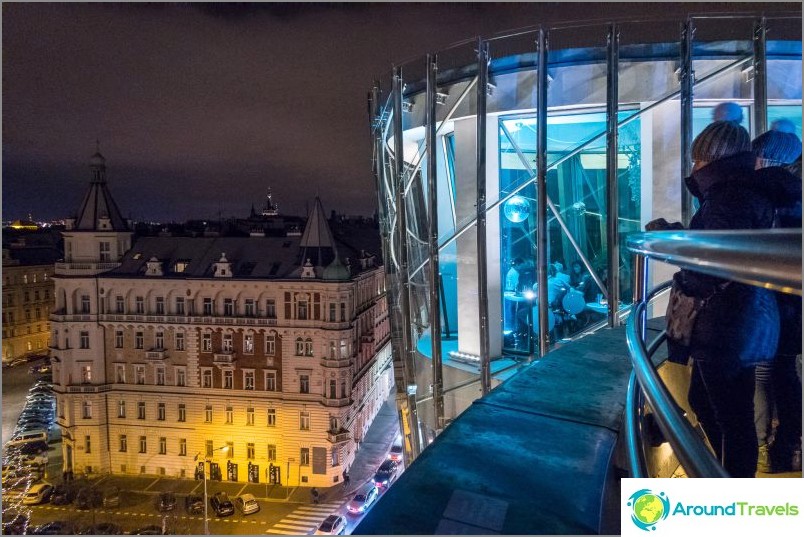 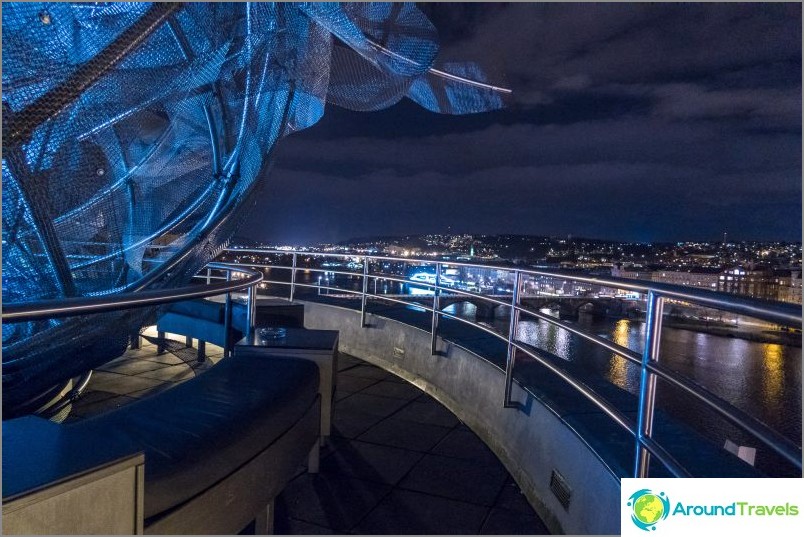 The Dancing House architects were inspired by the genius dance duo Ginger Rogers and Fred Astaire. That is why the house has a second, official name. «Ginger and Fred». The history of these 30s Hollywood stars will be even more interesting than the history of the house itself, but you can Google it yourself..

Half a century before Ginger and Fred froze on the Vltava embankment, a residential building was located in this place, which was subsequently damaged by the bombing of the Second World War. Czech President Vaclav Havel lived near the wasteland. As they say, it was he who first came up with the idea to put something unusual here..

Two architects: Vlado Milunich and Frank Gary, as well as a designer from England, Eva Irzicna, created what caused massive discussions among the Prague intelligentsia and ordinary citizens. The dancing couple was so distracted from the usual classical exterior of Prague buildings that serious disputes flared up. However, with the support of the President, the building was completed in 1996..

The cost of admission to the observation deck is 100 CZK or make an order at the bar.

It can be windy on the roof in autumn and winter, it is better to dress warmly. 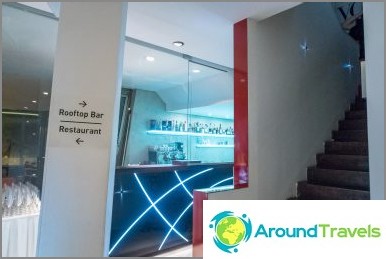 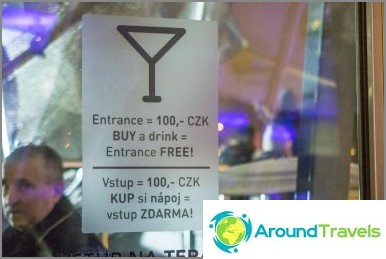 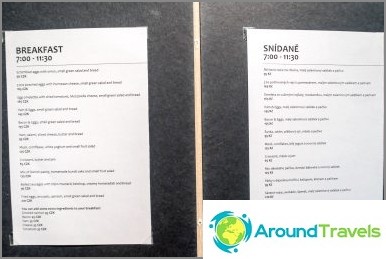 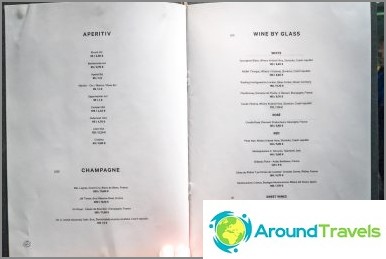 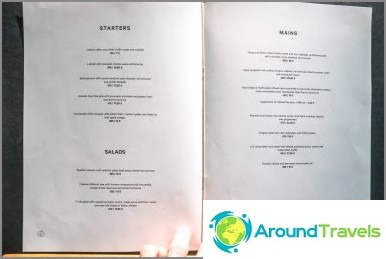 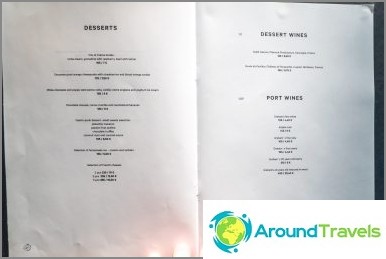 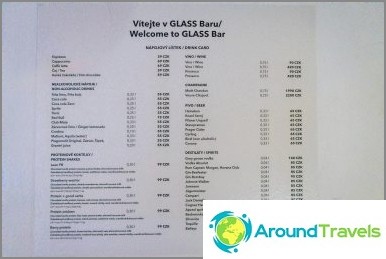 dancing House
House, or rather 2 houses of a very interesting shape. Inside there is an office center, a gallery, a hotel and a rooftop restaurant overlooking the city. It's worth going once.
More about the house. 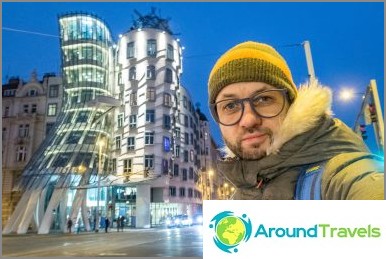 House, or rather 2 houses of a very interesting shape. Inside there is an office center, a gallery, a hotel and a rooftop restaurant overlooking the city. It's worth going once. More about the house.