When visiting the Zmeikovsky waterfalls, a jamb came out, I just put a mark on the map and drove here towards the end of the day (so the photos were not very bright). And at the same time I did not read anything about what you can see here. But more on that below.

I arrived quite calmly and easily, once skipping the desired turn from the serpentine, but if you go there on your own, then you will most likely face the same fate. Near the waterfall, I found a large cafe that occupied both banks of the Dikarka river.

The place is amazingly cool, quiet and atmospheric, with a bridge, a path to the waterfall itself, and several convenient vantage points, including an outdoor cafe terrace on the second floor. Near Cafe «Snake» there is a parking lot for 5-6 cars, where guests of the establishment can put their car.

If you came here to gawk or take a walk, then you are given a wide curb on the road before reaching the cafe. I actually parked there. Then he wandered around the territory, admired the cascading waterfall, which is really big, beautiful and spectacular, and went to test the menu of the Snake cafe. If I had known then that behind the ticket office a walking path begins upwards, along the stream, along which I could get to the other four (and there are four of them) waterfalls, then now the post would be different.

A thought sounded in my head - why waterfalls? He is alone, here he is, handsome, making noise in front of me. Having risen to the second floor of the cafe, I decided that the 2 waterfalls are one above the other, that is, this very cascade is the Zmeykovsky waterfalls. Only when I sat down to draw up a report, I came across a photo with a completely different waterfall, and then the truth about how I got lost was revealed to me.

But now I can tell you about it so that you do not repeat my mistakes..

The most spectacular and steep waterfalls are the first (which I have seen) and the last. Moreover, the latter must be filmed in comparison with a person in order to convey the depth and scale of the attraction. And for this you need a second person who would take such a photo.. 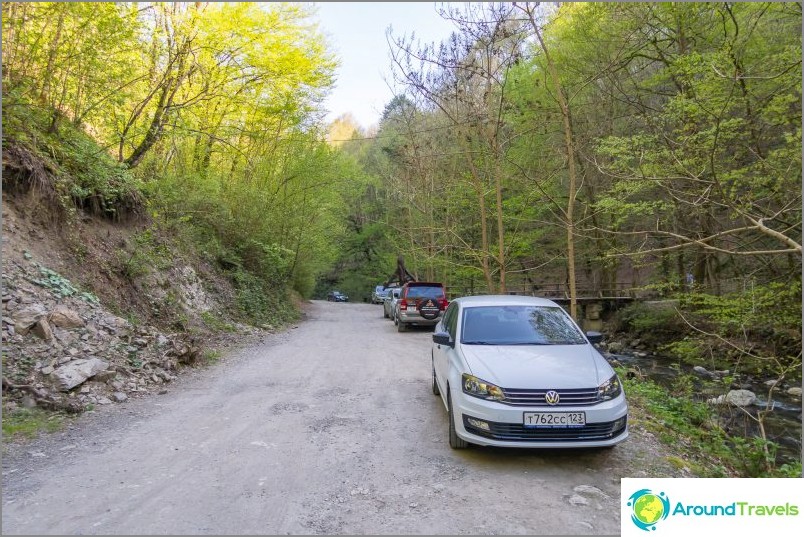 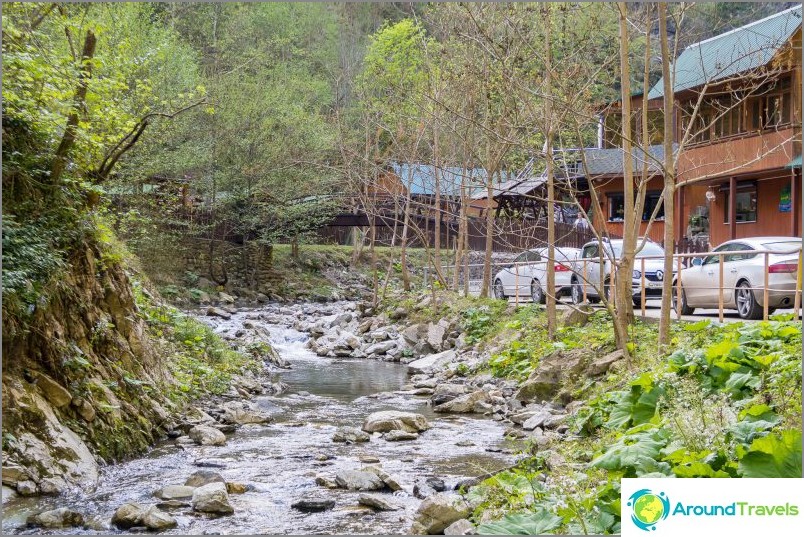 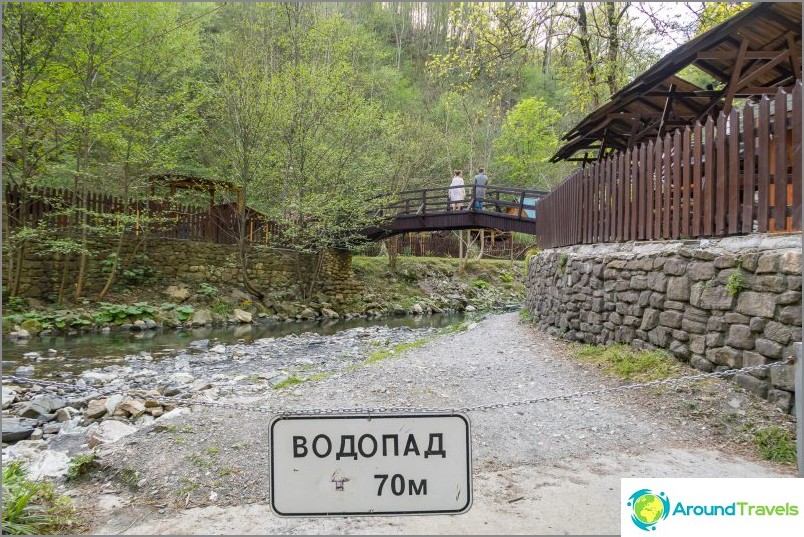 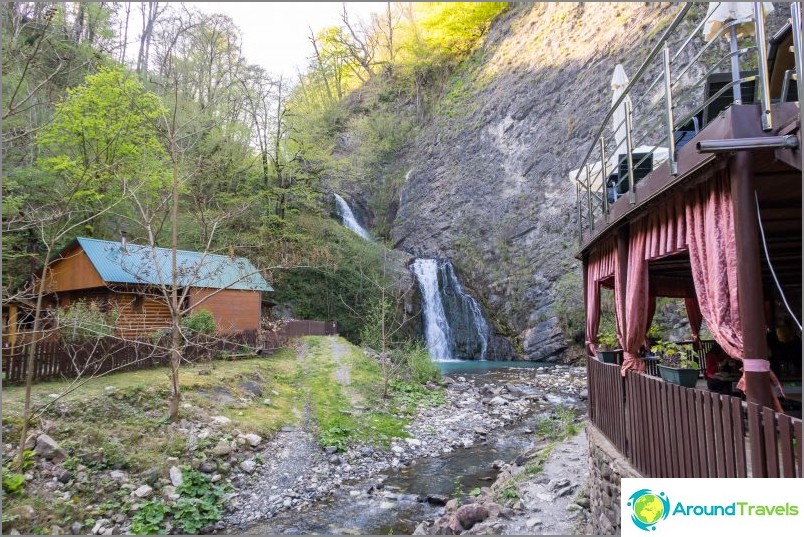 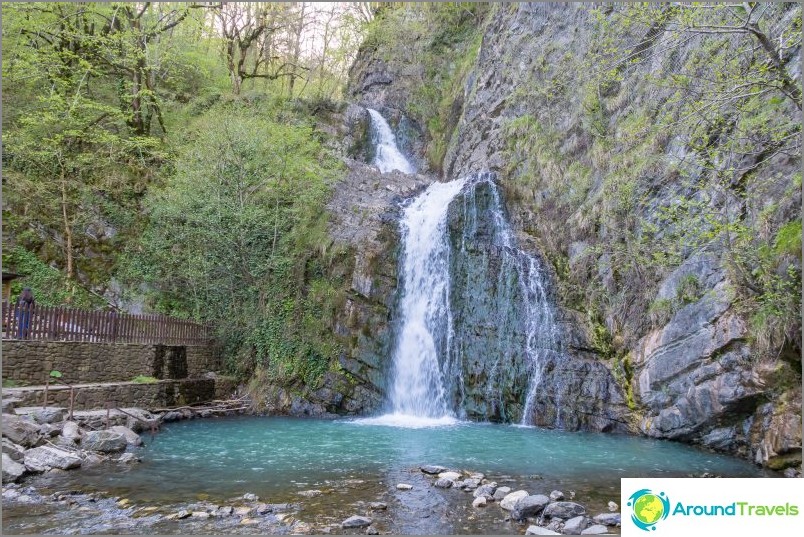 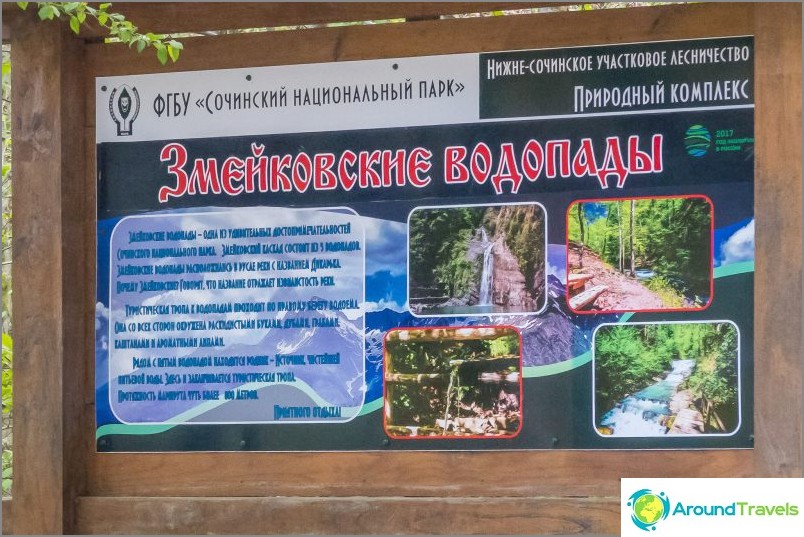 The cafe also deserves special attention. In itself, as an architectural landmark, it has no value, of course. But in conjunction with the place where it was built, I would say that the cafe «Snake» it is not just a food restaurant in a famous tourist destination, but a reason to come back. Personally, I would love to come here one more time purely for the atmosphere of a forgotten mountainous corner. It is always shady, cool and a waterfall rustling. Staff «Snakes» I liked my spontaneity, and the quality of the ordered dishes was a little more than drop dead. For a more detailed description with photos and prices, see here - Cafe Zmeyka is the only institution on the Zmeykovsky waterfalls. 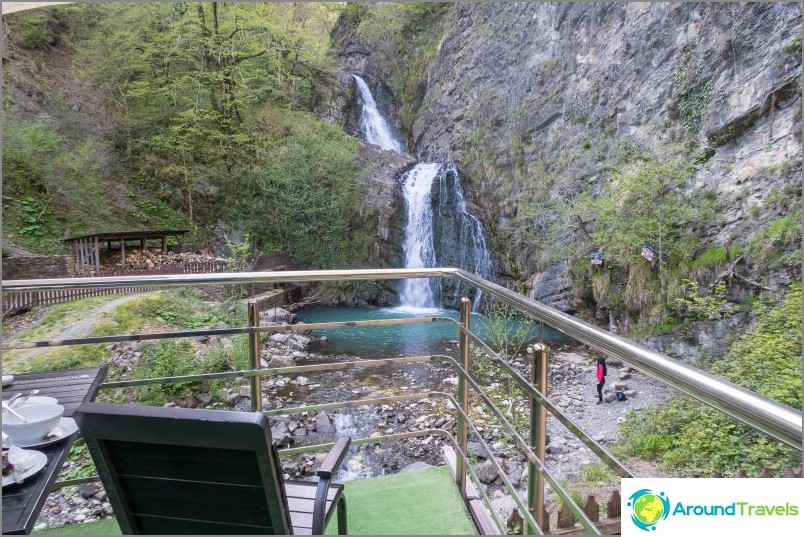 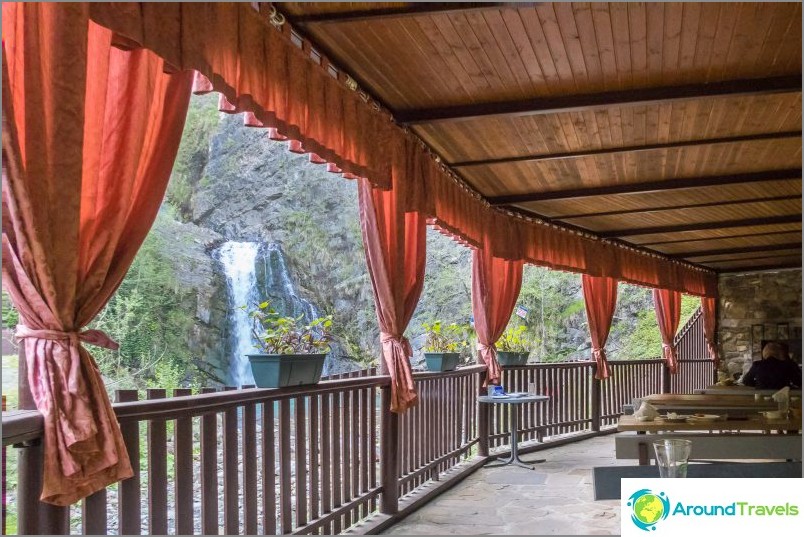 Cafe «Snake» on the lower waterfall 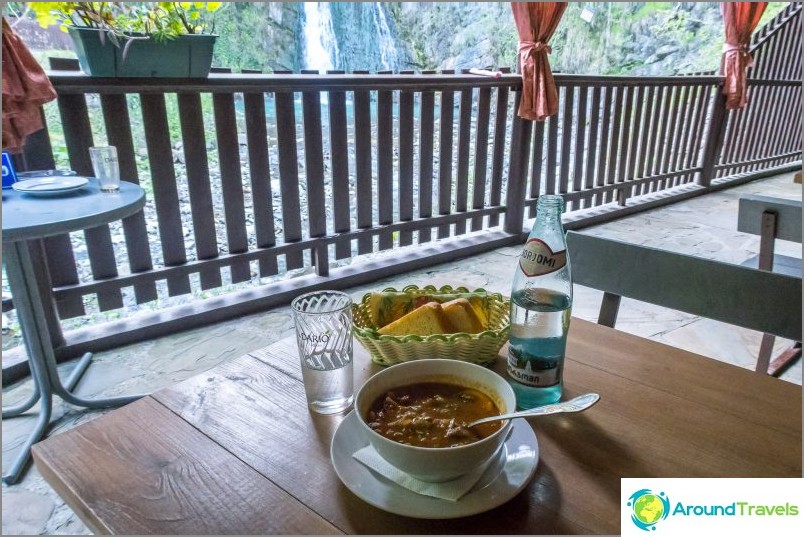 The entrance to the Zmeikovsky waterfalls costs 100 rubles at a separate ticket office behind the bridge.

It is not necessary to allocate half an hour to the waterfalls before sunset, but to fully drive for several hours, taking into account trekking to the last, most beautiful waterfall. And if the walk is in the summer in the midst of the heat, then it is necessary to lay in time for bathing in the bowls. If the first waterfall is enough for you, then half an hour to visit is also an option..

It is better to get to the Zmeikovsky waterfalls by car, using the navigator. YandexMaps in this regard rule in comparison with Google maps, so I highly recommend them.

And if you are a pedestrian, then you need to go from the railway station in Sochi by buses No. 120 and 180. When starting from Khosta and Adler, take whatever you can to the turn to Matsesta and there you catch 120 and 180 buses. You need a stop «Zmeikovsky waterfalls», from which you have to go down the road literally 50 meters and turn onto a steep narrow path running down to the houses.

Zmeikovsky waterfalls on the map

Imeretinskaya embankment in Adler - the road ...