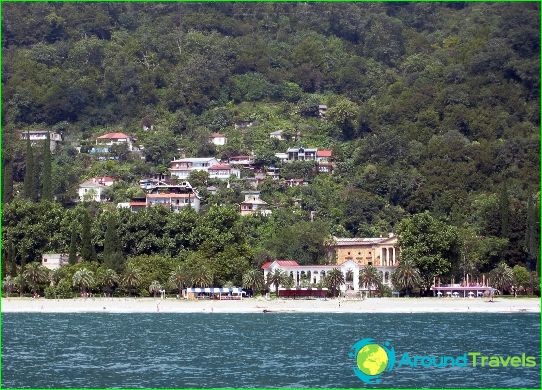 Abkhaz resort town of Gagra was founded inI century BC Greek merchants. Then it was called triglyphs, and owned these lands alternately Romans, Genoese and even Turks. Resorts became the city in the early twentieth century, when here conducted electricity, water park and laid on the orders of the Prince of Oldenburg. After just a couple of years things to do in Gagra became a fashionable way to spend a holiday not only for Russian tourists but also residents of other European countries.

During the tour in Gagra travelers manage to visit the many natural attractions, which is famous for Abkhazia. The most interesting nearby:

The climate in the resort area of ​​subtropical,providing participants travel to Gagra warm comfortable weather. In summer the thermometer shows a steady 30 and above, and in winter it is never colder than 12. The water warms up in July and August to 27, and the swimming season lasts from May to November.
Getting to the resort is easiest through the airportSochi, which is only 36 kilometers from Gagra. Then have seats in the minibus and pass the Psou border post, then take a taxi or again use minibuses services.
Pebble beach and city infrastructure allow us to recommend it as a comfortable and convenient vacation spot for families with children and active tourists young and middle age.