Home › Articles about Belize › Flag of Belize: photo, history, meaning of the colors of the national flag of Belize

Articles about Belize
by Alyssa 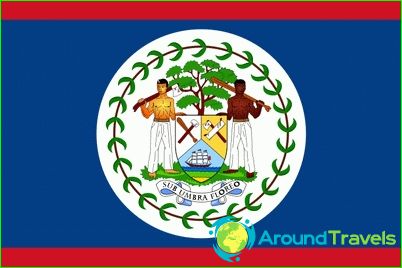 The official approval of the Belize flag took place in 1981. On September 21, the country gained independence and ceased to exist as a colonial possession of Great Britain.

Description and proportions of the flag of Belize

The rectangular flag of Belize has the standard proportions used for national flags in most countries of the world. Its length relates to width as 3: 2. The flag is absolutely identical on both sides.
The main field of the Belize flag is a deep blue. Above and below the blue background is bordered by narrow red stripes. In the center of the flag, the country's coat of arms is applied, which is equally distant from the pole and the free edge and practically touches the red stripes.
The blue color of the Belize flag symbolizes the Caribbean Sea, to which the state has access. In addition, blue was the main color on previous flags that existed during the period of British colonial rule. The red stripes on the Belize flag are a tribute to the patriots who shed blood for the sovereignty and freedom of their homeland.
The coat of arms of the country on the flag of Belize has a round shape, the borders of which are indicated by tree leaves strung on a thin line. In the center of the coat of arms there are figures of two lumberjacks holding a shield. Behind the shield is a tree with valuable red wood, which was traded on the territory of the country by the first Europeans. The shield depicts a sailboat, as a symbol of sea trade, and crossed oars and axes of woodcutters. The lumberjacks themselves represent different races: one of them is mulatto, and the second is fair-skinned..

History of the flag of Belize

The previous flag of Belize has existed since 1919. It was a blue rectangular cloth, the upper quarter of which, located at the pole, repeated the flag of Great Britain. On the right side of the blue field was inscribed the emblem of Belize, then called British Honduras.
In 1950, the country's patriots created the flag, which was almost unofficially considered the state flag until 1981. On its blue rectangular field there was a coat of arms, which practically did not differ from the modern version..
In 1981, in addition to the national flag of Belize, the flag of the Governor-General, who is the representative of Her Majesty, was also established. Despite gaining independence, Belize is a state with a parliamentary democracy of the Westminster system, and the Queen of Great Britain remains its head..