Home › Articles about Germany › Airport in Nuremberg: scheme, photo. How to get to Nuremberg airport

Airport in Nuremberg: scheme, photo. How to get to Nuremberg airport 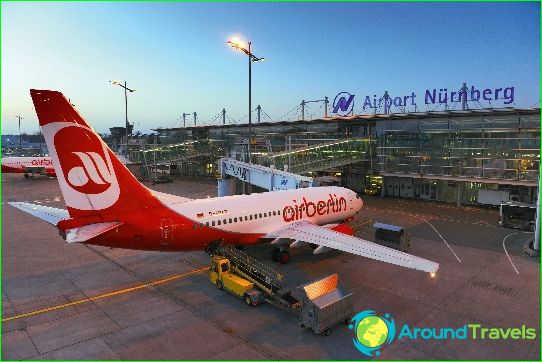 The second most important airport in Bavaria is located in the city of Nuremberg. Until the spring of last year, the airport was the main hub for Air Berlin. The airport in Nuremberg is located about 5 kilometers from the city of the same name.
Nuremberg Airport was built in 1955 and was the first airport built after World War II. 6 years after the construction, the airport was reconstructed for the first time, the runway was increased. After reconstruction, its length was 2300 meters. And the airport underwent the first major reconstruction in the late 70s - early 80s: a new terminal was built, and the apron was expanded..
In the 90s, 2 additional floors were added to the building of one of the terminals. And in the 2000s, the airport opened its own metro station. This fact greatly influenced the increase in the passenger turnover of the airport..
Today the airport is one of the 10 largest airports in the country, serving more than three million passengers annually.
In the near future, it is planned to increase the runway to 3500 meters.

The airport in Nuremberg offers its guests a variety of services needed on the road.
For those who like to observe the runway, there is an observation deck on the territory of the terminal. At the same time, you can enjoy the review completely free of charge, working hours - from 5 am to 9 pm For detailed consideration, you can use telescopes.
On the territory of the airport there are shops offering various goods. The Airport Shop offers a variety of drinks, snacks, and more. Also at the service of passengers is the Schmitt & Hann store, which offers the latest press and popular literature, including Russian-language books. Also worth noting is the Thomas Sabo jewelry store, where you can find various jewelry made of gold, silver, etc. Shops are open from half past five in the morning until eight in the evening.
Of course, there are cafes and restaurants on the territory of the terminals. At the Marsche Bistro restaurant you can enjoy local and Italian cuisine - pizza, salmon, etc. The familiar Mc Donald also works.’s.
For passengers with children, there is a mother and child room.

As mentioned above, the airport has a metro station, so the city can be reached by metro.
In addition, buses and taxis run regularly from the airport to the city..