Suburbs of Baden-Baden - photo, what to see

Articles about Baden-Baden
by Alexis 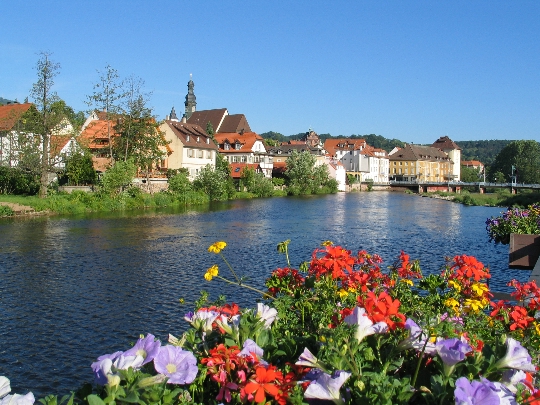 The ruins of ancient Roman baths in the German city of Baden-Baden clearly indicate both the long history of this place and its unique healing potential. Thermal springs allowed the resort to flourish for many centuries, and even royalty and guests of royal blood strove here. The suburbs of Baden-Baden still retain the authentic spirit of old Germany with half-timbered houses and bright flowers in pots on the windowsills.

In the cellars of the Grape Castle

The list of the most famous suburbs of Baden-Baden includes the town of Gernsbach in the Murg Valley. The recognized climatic resort boasts mild weather in all seasons and magnificent mountain landscapes. Gernsbach received its city status in the 13th century, and, despite several large fires in its history, it managed to keep its central part intact..
Thermal springs, authentic restaurants with local cuisine, gorgeous landscapes and panoramic views from observation decks are not the only advantages of this suburb of Baden-Baden. Its main architectural medieval masterpiece is Eberstein Castle, nicknamed Vineyard.
The pearl of medieval architecture rises above the city, surrounded by well-tended vineyards scattered along the slopes. You can taste the famous Baden wines in the castle cellars, and enjoy lunch overlooking the Murg Valley in the restaurant on the terrace..

The old castle in the suburbs of Baden-Baden is a favorite walking place for the public who came "on the water". This magnificent medieval structure on the Buttert cliffs at an altitude of more than 400 meters was built at the very beginning of the 12th century. The uniqueness of his project was the presence of a sewer system in the castle, which was an unheard-of innovation for those times..
The old castle served as the residence of the Margraves of Baden until the 15th century, when a devastating fire destroyed the interiors of the magnificent building. Today, the eolian harp is installed in the knight's hall of medieval ruins - a device that sounds thanks to the vibrations of the wind..

Walks in the Rhine Valley

The surroundings and suburbs of Baden-Baden are also the magnificent Rhine Valley, where the best grape varieties for the production of German wines are grown. In the picturesque area, tens of kilometers of hiking trails are laid, walks along which will allow you to enjoy the clean mountain air and ideal landscapes of southwestern Germany.