Airport in Munich - El Prat: scheme, photo. How to get to Munich airport 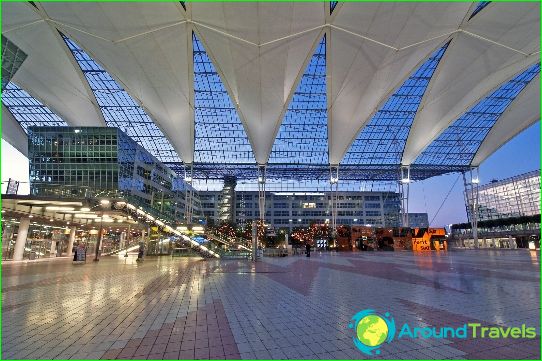 Only one airport belongs to the city of Munich: its full name is Munich Airport named after Franz Josef Strauss (named after the Prime Minister of Bavaria). At one time, he replaced the airport «Munich - Rome», which was originally conceived as an airport for a large number of passengers. Opening date - May 17, 1992. «Native» airport of the largest German air carrier - Deutsche Lufthansa AG.

Munich Airport is the largest German airport; more passengers are served only by the Frankfurt am Main airport. At the moment, it is located about 28 kilometers from Munich, in the north. Air service is provided with 20 German cities, 160 cities in Europe and 61 cities located in other continents. As a rule, passengers arrive at the airport in Munich, who themselves plan their trips to Germany. The easiest way to get there from Russia is by plane..
Arranged airport «in German», that is, it is very convenient - there are many easy-to-use carts, reasonable prices for using lockers (3.5 euros for luggage up to 5 kg, 4.5 euros for luggage up to 20 kg per day). By the way, there are not only automatic lockers, but also those where a person takes luggage. Both those and other cameras work around the clock.

There is an opportunity to book tickets, use the hotel search service, free internet, order a taxi and even a limousine. The airport offers photo booths, which are very convenient to take urgent photos, a camera of forgotten things, a mother and child room, children's rooms. Right there you can use the services of different banks, a hairdresser, a post office. There are separate rooms for meditation and prayer

Of course, there are restaurants and cafes at Munich Airport. Interesting fact: the world's first airport brewery was opened here. So if you want to explore this attraction, welcome to the third level between the first and second terminals.

If you need to see the entire territory of the airport, then use the observation deck in the second terminal on the seventh level. From it you can see the eastern platform of the terminal and both runways. The telescope allows you to see everything that happens on the territory. The cost of access to the observation deck is 2 euros, for people in wheelchairs and children - free of charge. She works every day, from 8 am to 10 pm.