Naples in 1 day: where to go in Naples 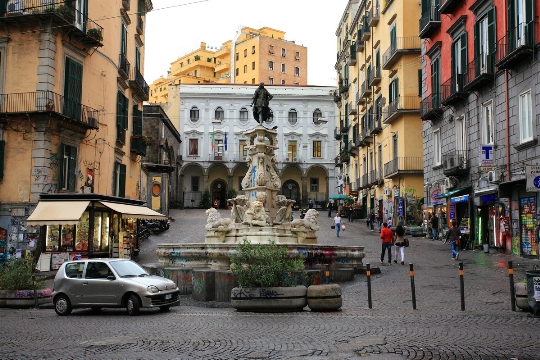 If you find yourself in southern Italy on September 19, there is a chance to see Naples in 1 day during the celebration of St. Januarius. In memory of the patron saint of the city, its inhabitants arrange colorful processions and fairs, and the famous Neapolitan pizza is delicious on this day as never before..

The phrases about seeing and dying different cities of the world, it turns out, are just a rewrite of the admiring exclamation of Goethe, who traveled in 1787 in southern Italy. He was so impressed by the beauty of Naples that he considered it worthy of a last journey. According to other versions, the German only repeated the favorite exclamation of the Neapolitans themselves, but one way or another, and the sights of the city at the foot of Vesuvius attract many thousands of tourists here every year..
You can start exploring Naples already in its metro. Line 1 of Naples metro is considered a model of modern art, and the decoration of its stations is a constant delight of metro passengers..
The main city palace - the residence of kings - was built at the beginning of the 17th century. Its western facade attracts attention with equestrian statues, in which Petersburgers will be amazed to recognize ... the masterpieces of Klodt's work from the Anichkov Bridge. They were presented to the King of Naples by Nicholas I for the hospitality shown to the Russian queen during the Italian tour. For the bridge itself, the statues were re-cast. Today, the Royal Palace houses the National Library, and fans of ancient painting can visit the Museum of Historical Apartments, where paintings by Titian are exhibited..

For those who find themselves in Naples for 1 day, it will not be easy at all to have time to embrace the immensity. For example, the National Archaeological Museum is worth a visit, if only for the artifacts obtained as a result of excavations buried under a layer of lava and ash from Pompeii. The list continues with other worthy structures in Naples: