Suburbs of Naples - photo, what to see 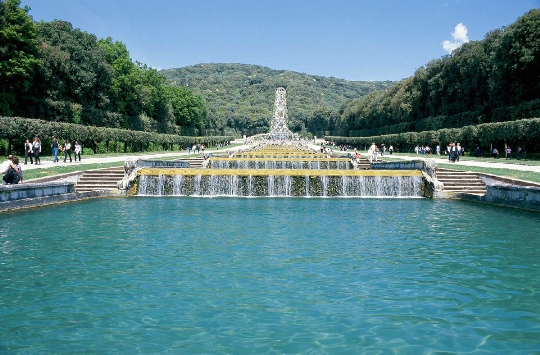 A major seaport and one of the most populous Italian cities, Naples is famous for the views of the active volcano Vesuvius and the magnificent panorama of the city's bay. People come here to take a sip of the southern Mediterranean exoticism, try real pizza in its homeland and visit the suburbs of Naples, where many ancient sights have been preserved..

This city was buried under a layer of volcanic ash in 79 AD. Vesuvius destroyed it without a trace, and today Pompeii is called an open-air museum. Temples and basilicas, forum and baths, theaters and residential buildings - archaeologists have managed to restore dozens of unique objects hidden under a layer of lava and ash.
The oldest temple in Pompeii is dedicated to Apollo. Its construction began in the 6th century BC. to this day, fragments of the colonnade and a bronze sculpture of Apollo have been perfectly preserved.
The dwelling houses of the Pompeians make a special impression on the traveler. They are decorated with mosaics and frescoes depicting scenes from ancient Greek myths, and the surviving utensils demonstrate the high level of development of the economy of the townspeople..

In the lists of the World Cultural Heritage of UNESCO, along with Pompeii, there is another ancient suburb of Naples. Herculaneum died as a result of the same eruption of Vesuvius. The ancient city, according to legend, was built by Hercules himself, for a long time was under the influence of the ancient Greeks, then it was captured by the Samnites. The Romans took control of Herculaneum in the 1st century BC, and a hundred years later the city was buried under a layer of ash.
One of the most unique discoveries during the excavations of Herculaneum was the villa of the papyri. The private library contains over 1,800 scrolls from ancient times. Scientists believe that among them may be the works of Aristotle, Sophocles and Euripides.

The northern suburb of Naples, the town of Caserta is especially famous. Here is the royal palace, which in the 18th century became the largest building in the Old World. More than 1,200 rooms of the palace still stagger the imagination of visitors and serve as a stage for filming famous films not only by Italian directors, but also by masters of Hollywood.
The magnificent palace was built for almost 30 years. Paris's Versailles and Madrid's Escorial were taken as a model, and the luxurious park still remains one of the most grandiose in Italy. In 1997, UNESCO lists the royal palace in the suburbs of Naples on the list of World Heritage of Humanity.