The symbol of Rome - photo, description. Famous symbols in Rome 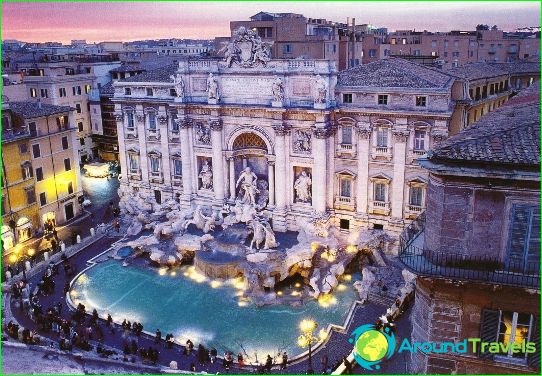 The capital of Italy is ready to offer its guests many opportunities for a full-fledged vacation, which is worth only a sightseeing tour of Rome, which will allow you to get acquainted with its magnificent architecture.

A lot of interesting things can be learned from the guides (they have an archaeological and historical education) by joining the excursion - they are organized every 30 minutes (languages ​​- main European; cost - 4.5 euros). It should be noted that tourists will be able to attend various performances and concerts (the Colosseum is used as a decoration - it is an ellipse with an arena in the center).

In ancient times, Neptune, Venus and other Roman gods were worshiped here, as well as sacrificing animals during ceremonies. Today, the Pantheon is a "repository" of the remains of the Italian kings. It should be noted that this attraction is not only a place where you can arrange a wedding photo session: wedding ceremonies are held here for those who wish..

Despite the fact that earlier the oval-shaped square was the location of the market, today trade is carried out here only during the Christmas holidays. Tourists flock here to admire the Fountain of 4 Rivers (decorated with sculptural images of such large rivers as the Danube, Ganges, Da-Plata, Nile), the Church of St. Agnes (which is the "repository" of the head of Agnes and the ashes of Pope Innocent X) and other objects, and also attend the performances of street musicians.

At the fountain, you can take a photo against the background of the figure of Neptune sitting on a chariot-shell (it is recommended to carry out your plan in the evening, when the water is illuminated by bulbs). And according to the established tradition, you can throw a coin into the water, while becoming your back to the fountain.

The hills are also symbols of Rome, among which the following stand out: