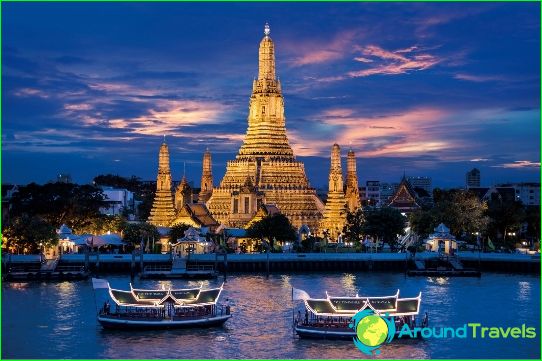 Rest in Bangkok is an acquaintance with exotic culture and architecture, as well as the opportunity to taste Thai cuisine, spend time in bars and other entertainment establishments..

The main types of recreation in Bangkok

Prices for tours to Bangkok

It is recommended to have a rest in the Thai capital in November-April. Since this time is high season, prices rise by 40-50%. The increase in the cost of vouchers to Bangkok is also observed on New Year and Christmas holidays. You can save money by coming to Bangkok during the low season, which lasts from May to October. But it is worth considering that at this time it is quite hot + it often rains, lasting 15 minutes - 1 hour.

The best way to travel around the city is by metro, as during rush hours buses are overcrowded and you will have to spend a lot of time to get from one point of interest to another..

Before visiting public institutions and temples, you should take a responsible approach to the selection of wardrobe - the outfit should not be defiant and frank.

If you are interested in buying jewelry, do not go to local markets for them - tourists are often deceived here, trying to sell them a fake at a high price.

As a souvenir of your vacation in Bangkok, you can bring Thai silk, jewelry, precious stones, crocodile leather products, Buddha and elephant figurines, a necklace of Thai pearls, ceramics, Thai rum.

Photos of rest in Bangkok