Articles about Antalya
by Ashley 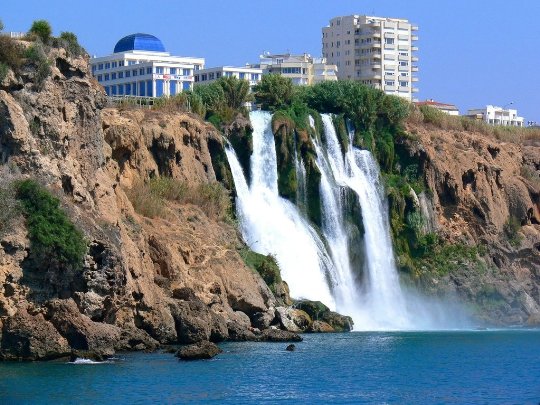 The capital of the resort life of Turkey, Antalya has become a habitual summer destination for several generations of Russian tourists. The typical Mediterranean climate allows you to open a full beach season in Antalya in May, and you can swim and sunbathe on its coast with great comfort until late autumn.

The best time to relax on the Antalya Riviera is late spring and early autumn. These seasons are not characterized by too high temperatures. In May and early June, thermometers record +26 degrees in the shade, and +27 in September-October. The sea warms up during this period up to +22 - +25 degrees and allows even children to feel comfortable in its waves.
Antalya is considered a region with a fairly high indicator of air humidity. It is at least 64%, but even such values ​​are easily tolerated in the spring-autumn period, when the heat does not exceed all reasonable limits. In summer, thermometers tend to record much higher temperatures and +40 degrees in July for Antalya is the norm. The sea heats up to +28, and the daily number of hours of sunshine tends to the maximum. The highest temperature indicator in the entire history of weather observations was recorded at around +45 degrees.
A relaxing holiday at the height of summer in Antalya can be organized without any health risks. The most favorable hours for sunbathing are the first half of the day and before sunset. The use of sunscreen reduces the risk to the skin, and clothing made from natural fabrics helps to avoid overheating.

Those who prefer winter holidays in Antalya are just as lucky. The mountains close the resort from piercing winds from the north, and even at the height of the New Year holidays, the air temperature here does not drop below +9 degrees. There is plenty of entertainment in Antalya in the winter season: magnificent indoor water parks, medieval architectural sights, and night discos in the most modern clubs.
A separate pleasure is tasting Turkish cuisine in restaurants and cafes and getting to know the local coffee, which is prepared here on the sand in copper cezves. By the way, the water temperature in the Mediterranean Sea at the height of winter in Antalya does not drop below +16 degrees, and the most desperate tourists arrange short swims. Another advantage of winter tours in Antalya is discounts and bonuses in local markets and shopping centers, timed to coincide with Christmas and New Year..