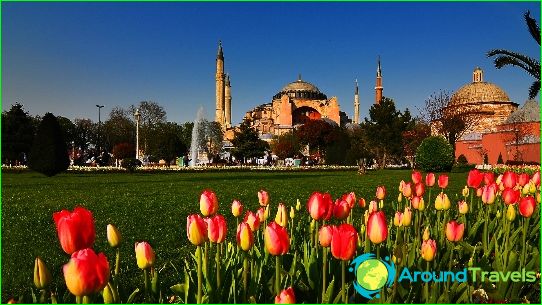 The largest and most colorful Turkish city was called differently in former times. It was called Byzantium and New Rome, Constantinople and Constantinople, and today Istanbul is one of the most attractive places in Asia and Europe, and its districts are spread out in two parts of the world at once. Tours to Istanbul are chosen by romantic natures who are keen on history, because this city is not at all like traditional Turkey, which a typical Russian traveler is used to representing..

Europe and Asia in Istanbul are connected by bridges across the Bosphorus. It connects the two seas of Turkey - the Marmara and the Black. Once the capital of the Roman and Byzantine, Latin and Ottoman empires, the city has absorbed all the best and exotic from both Western and Eastern civilizations.
The metropolis is divided into 39 districts, and only two of them are geographically located in Asia. Most of Istanbul is the real Europe, despite the unusual names for the European ear.

Istanbul - the city of two continents