Articles about Lviv
by Ashley 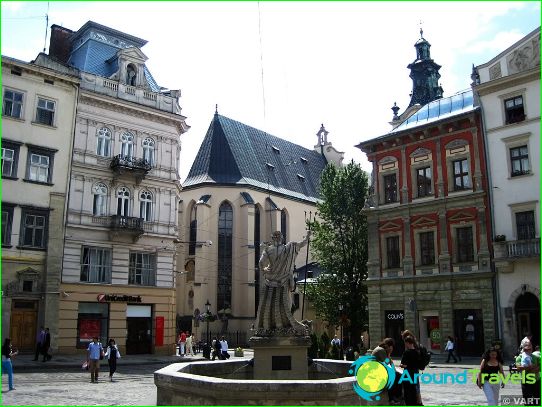 Lviv is the westernmost Ukraine and one of the largest cities in the country. Its historical center rightfully occupies a worthy place in the UNESCO World Heritage List, because the city contains the largest number of architectural masterpieces in Ukraine. The ratings of tourist attractiveness did their job and tours to Lviv became popular among Russian fans of interesting trips..

The city was founded in the middle of the 13th century by the Galician prince Daniil Romanovich and became the capital of both the principality and the entire Ukrainian state. Lviv got its name in honor of the prince's son Leo, and today residents love it call it little Paris, Ukrainian Piedmont, a city-museum and even the pearl of the European crown.
Lviv is located just 70 kilometers from the Polish-Ukrainian border, and 600 kilometers separate it from Kiev, easily overcome by car or rail..
Participants of tours to Lviv, in addition to architectural attractions, are waiting for more than twenty parks and botanical gardens, many of which are natural monuments and preserve the ecosystem as close as possible to natural conditions.

The climate of Lviv is rather humid and warm. Winters are mild here, snow falls often, but does not lie for long, and the air temperature in January hovers around -7 degrees. The sunniest days are in August and September, when precipitation is minimal. Summer temperatures are about +24, in June-July thunderstorms and short-term showers are frequent. The most favorable time for tours to Lviv comes in early autumn, when the air warms up to +20, precipitation is rare and most of the day is sunny..