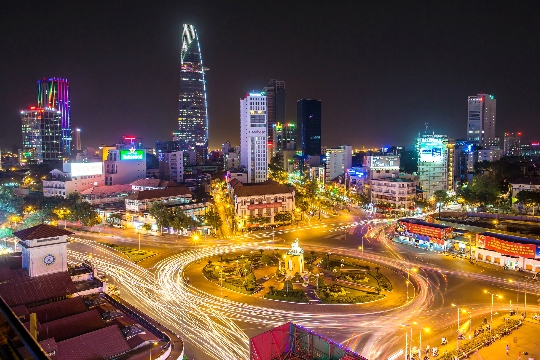 The central part of the city is decorated with colonial-style buildings, which are adjacent to skyscrapers and modern buildings. There are 24 districts in the city. Some of them are indicated by numbers, while others have names. Popular tourist spots, hotels, restaurants and the central market are located in the first district. Chinatown is located in the fifth district. You can walk on the territory of one district.

Ho Chi Minh City's famous street is Pham Ngu lao, which houses all kinds of restaurants, cafes, bars, hotels and travel agencies. In the evenings, it is very crowded here, as all the establishments are functioning. This street has good shops, spas, fresh fruit stalls. From here, the city's main attractions can be reached in 10 minutes.

Bui Vien Street, which runs parallel to Pham Ngu lao, is considered to be no less popular. It also offers a lot of entertainment for tourists..

The most beautiful places

Ho Chi Minh City's architecture is multi-ethnic. It combines the traditions of Western European and Chinese culture. The city is home to Vietnamese and ethnic Chinese. In the last century, Chinatown was formed in Ho Chi Minh City, which is considered the largest urban area in Indochina. Today it is a huge quarter called Sholon. It occupies the western part of Ho Chi Minh City. Most of the country's trade is conducted through this quarter.

In Ho Chi Minh City, you can see beautiful pagodas and temples. The Cathedral of Our Lady of Saigon or Notre Dame de Saigon, located on the Parisian square, is widely known. The colonial building of the city post office is located in the same place..

The commercial center of the city is Dong Khoi Street. There are branded shops, popular restaurants and cafes. Famous shopping streets are Nguyen Thong, Nguyen Thien Thuat, and others. Good wines are offered by vendors from Nguyen Chong Street, and Chinese medicine is available on Hai Thuong Lan Ong Street. The famous antique street Le Cong Kieu is located in the center of Ho Chi Minh City, next to Ben Thanh Market.