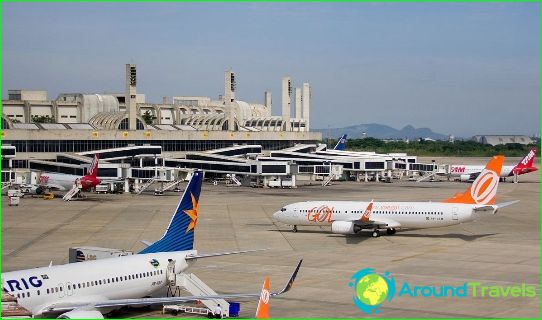 Rio de Janeiro Airport is located about 20 km from the center of the Brazilian city of the same name. It is one of the most important airports in the country, along with São Paulo Airport. It is often called Galeão Airport. This name was chosen due to the fact that Galleon Beach is located next to Terminal 1. Another name is Antonio Carlos Jobim Airport - a famous Brazilian musician.

The airport in Rio de Janeiro begins its history in May 1923, when the naval aviation school was located on the Galleon beach. After 20 years, the first hangars and a terminal were built here. The buildings, like the Galleon Air Force, are still active today..
In the winter of 1952, the passenger terminal was put into operation. By 1970, Galeão Airport became the country's main international airport. 7 years later, a new terminal was opened, which is actively used today - Terminal 1.
Rio de Janeiro Airport lost its status as the country's main airport in 1985. Then the airport in Sao Paulo put into operation a new runway, which allowed servicing the aircraft without any weight restrictions. Therefore, all major foreign airlines have increasingly begun to use the services of this airport..
Now Galeão Airport is gradually regaining its status, constantly working to improve the quality of service..

The airport has 2 active terminals, which are connected by an escalator. Also, a special paid bus runs between them..
Terminals have convenient and understandable pointers, so there shouldn't be any difficulties. In addition, information desks operate in both buildings..
The airport has various services that you may need on the way: cafes and restaurants, shops, ATMs, post office, etc..
Car rental companies operate in Terminal 1.

There are various ways to get to Rio de Janeiro from the airport. You can get to the city center by bus # 2018, which runs from 05:30 to 23:00. Tickets for this bus can be bought at any terminal.
There is also a regular bus that takes passengers through the main beaches and hotels in the city. The fare will be about $ 4.
You can get to the city by taxi for about $ 30.