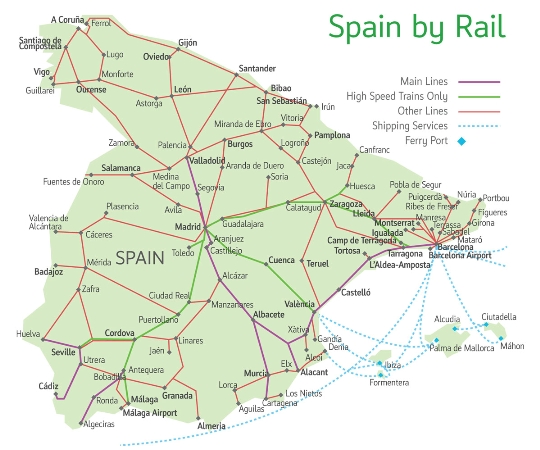 All regions and major cities of Spain are connected by rail. Traveling around the country, you will notice that buses are much cheaper here than trains. The Spanish railways are considered to be among the most comfortable in Europe. The RENFE national trains are punctual and comfortable. The state-owned company RENFE is a monopoly in the field of railway transportation.

By planning a trip in advance, a traveler can save a lot. Railway tickets are divided into three classes: prefente, turista plus, turista. The first class ticket is prefente, which means a seat with a wide seat. Some first class carriages offer passengers lunch and newspapers. Night trains run between Spanish cities. Rail links are maintained with countries such as France and Portugal. The main RENFE routes start from Madrid. From this city, a passenger can travel to any locality in the country.

Not only RENFE trains run for short distances, but also trains of other railway companies: FGV, FGC, FEVE, ET. The trains of these companies are necessary to overcome the distances between neighboring cities..

The speed of about 300 km / h can be developed by trains of the AVE type. They follow the most popular routes, from Madrid to Barcelona, ​​Seville and other cities. Alvia type trains accelerate to 220 km / h. There are even slower Euromed and Altaria trains. Passenger trains are designated "Express", and fast trains - "Talgo". Comfortable MD trains are used to travel long distances. The cost of tickets for such trains is not very high. They move faster than electric trains, which is why they are popular with the Spaniards. Talgo fast trains have second and first class carriages with separate carriages for smokers. there are sleeping places on night trains.

The Spanish Railways website offers tickets at affordable prices. They can be purchased as early as 60 days before departure. Ticket prices depend on the comfort of the train. For example, there are 20 trains from Madrid to Barcelona. The fare varies between 60-130 euros. The best option is to buy a ticket in advance on renfe.com. By purchasing a ticket on the day of departure, the traveler overpays a significant amount. Spanish Railways maintain a flexible fare system. On the RENFE website, you can see all the current rates. Flexible tariff is considered a regular tariff. The cheapest is the Promo fare, which allows you to get a 60% discount from the regular ticket price..