Home › Articles about the USA › Airport in Denver: scheme, photo. How to get to Denver airport

Airport in Denver: scheme, photo. How to get to Denver airport 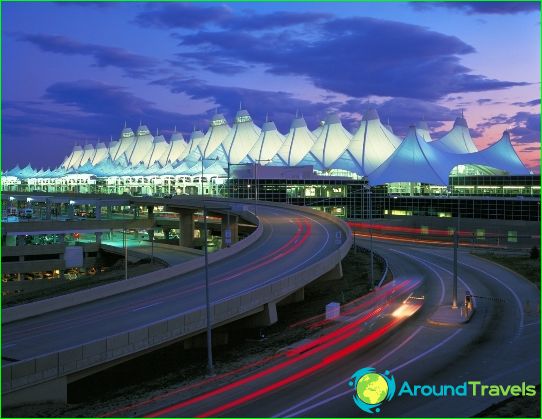 Denver Airport currently has 3 passenger terminals. The buildings are built in the form of rocky mountains - this is one of the sights of the city. The terminals are of course equipped with the latest technology. There are over 130 boarding gates.

Denver Airport offers all the services that guests need on the road. Here you will find many cafes and restaurants ready to feed hungry passengers.
A large area of ​​shops where you can buy various goods - cosmetics, perfumes, toys, gifts and souvenirs, food, drinks, etc..
For passengers with children, there is a mother and child room, as well as special play areas for children are equipped on the territory of the terminals.
The airport provides a set of standard services such as ATMs, post office, VIP-lounge, Internet, currency exchange, etc..

There are several ways to get from the airport to the city. The cheapest option is metro and buses..
In addition, you can use the services of numerous taxis.
Alternatively, you can offer a rented car, tenant companies work in the territory of the terminals.