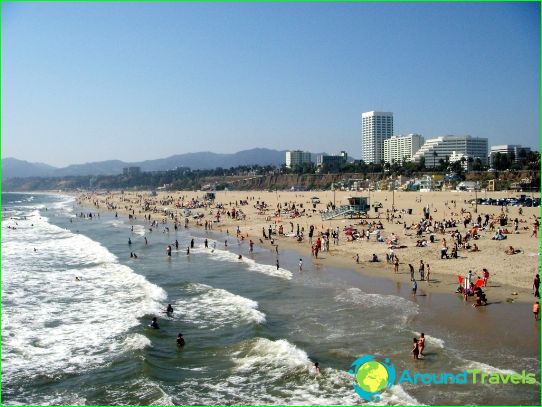 The third symbol of California, after Disneyland and the Hollywood sign, is the Los Angeles beaches. There are about twenty of them. If you've never been to Los Angeles County before, you may be surprised to find that Los Angeles beaches aren't as sunny as you'd expect. As soon as the temperature rises, a cool and humid sea breeze immediately blows on the beaches, covering them with a foggy blanket. This happens so often at the beginning of summer that the Californians have nicknamed the phenomenon "the darkness of June", however, these fogs occur in May, and sometimes in July and August.

Sometimes fog and low clouds disappear early, but sometimes the sun may not show until the afternoon. But even on cloudy days, ultraviolet light passes through the clouds, so sunscreen comes in handy here too..

So, the best sandy beaches in Los Angeles.

This is one of the most famous beaches in Los Angeles, even if its name is consonant with the name of the Italian city on the water, the similarity is pumped on this. The life of California in Venice is closely connected with the film industry. And it's romantic in its own way. The film "Speed" was filmed here with Sandra Balok. Richard Gere here shone on the set of the film "On the last breath." And even the TV series "Rescuers Malibu" was filmed here, and not on the beaches of Malibu. So Venice Beach is, in a sense, famous all over the world. After all, the main role here is not played by the surf and sand, but by the lively action on the sidewalk, presented by street performers, artists, roller skaters in bikinis. Crowds of onlookers walk here, and sellers vying with each other offer all kinds of incense and sarongs. The ubiquitous Hare Krishnas, whimsically wriggling dancers and other colorful characters are the regulars of Venice Beach.

Manhattan Beach hardly lags behind Venice Beach in terms of the number of shoots. Only here, on the coast, did TV crews work on their shows. It seems that literally all the beautiful people of the city have gathered here, having parked their shiny cars. So big sunglasses flash.

The more modest people are busy with beach volleyball, and desperate surfers saddle their boards near the pier. And at the very end of the pier there is a huge aquarium with curious specimens of sea creatures..

So we got to the aforementioned beaches of Malibu. This place has long been a Mecca for surfers. But before you try on a new wetsuit yourself, think about how safer it is to remain a spectator. The water here rolls onto the shore, and at this time surfers eagerly strive to catch that very ideal ocean wave along which you can rush for an infinitely long time..

Located north of the pier of the same name, Santa Monica Beach attracts many visitors to California. This is one of the most popular beaches in Los Angeles. The strip of golden sand stretches for two miles and it seems that there is no end and edge to it. It is spacious here, you can just stretch out under the sun, without risking interfering with those who want to play beach volleyball. And there is enough room for cyclists.

Photos of beaches in Los Angeles