New York in 3 days: where to go in New York 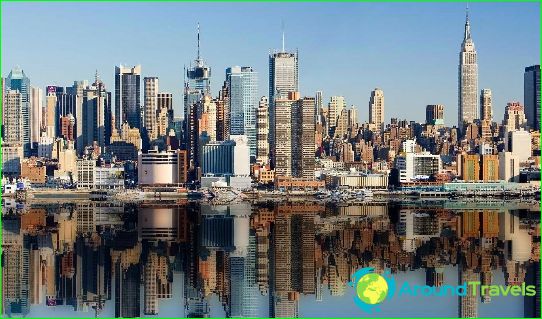 More than 20 million people include the New York metropolitan area, and the Big Apple receives several times more guests every year. Artists and romantics, theater-goers and art critics, shopaholics and gourmets aspire to the largest city in the United States. It is not even worth trying to get around the whole of New York in 3 days, but it is quite possible to get acquainted with its most important sights in such a short time..

Once upon a time, Central Park in New York was the most dangerous and criminal place in the city, where even the police did not dare to enter. Today, Central Park is home to kilometers of bike and jogging paths, emerald lawns, magnificent views of the surrounding skyscrapers and dozens of tame squirrels willingly posing for photographers..
One of the most famous places in Central Park is the Strawberry Glades Memorial, created by Yoko Ono in memory of the deceased John Lennon. The mosaic panel in the park is located directly opposite the "Dakota" - the house in the courtyard of which the leader of the "Beatles" was killed.

New York in 3 days is also a must-see trip to its famous skyscrapers. Perhaps the three most famous are worthy of special attention. The Empire State Building was built almost a hundred years ago and has long been considered the tallest structure on earth. Its spire is one of the symbols of the capital of the world, and the observation deck is a suitable place for panoramic photography. Its only drawback is that it is not visible from it ... the Empire itself. To correct this misunderstanding, you can climb to the roof of the Rockefeller Center skyscraper.
The Chrysler Building is no less famous - the most beautiful, according to New Yorkers, skyscraper in the city. Its eye-catching spire has been featured in many movies, and its roof pattern mirrors the tread pattern of the first Chrysler tires. The building is located near New York Central Station, where you can admire the starry sky of the ceiling and taste oysters at its famous bar.
The city recently received a third skyscraper, which has become a symbol of the fortitude of its inhabitants. Freedom Tower was built on the site of the death of the World Trade Center skyscrapers, next to the 9/11 memorial.

To be in time to the maximum

And in New York, in 3 days you can walk through Times Square, feel its frantic rhythm, sit on the steps of the red staircase and buy a ticket to an evening performance in one of the Broadway music halls. And the next day, walk the entire Broadway from the first to the last building, try to fit into the frame with the Iron House, look at the Statue of Liberty from the yellow ferry and, re-entering the land of Manhattan, understand that this city deserves the title of the capital of the world.