Airport in Washington: diagram, photo. How to get to Washington airport 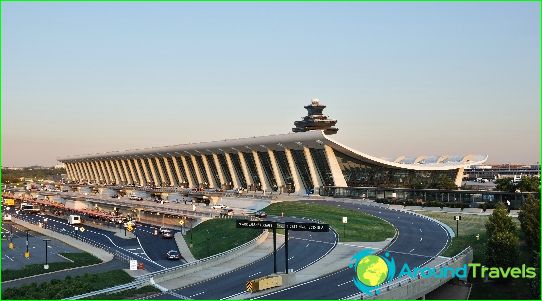 The US capital is served by three airports - Baltimore / Washington, airport. Ronald Reagan and the airport. Dulles.

Baltimore / Washington is an international airport located approximately 50 km North-East of the capital. You can also find the name - "Baltimore / Washington Marshall". This name is given in honor of the first African American Targut Marshall. The airport is in the top 50 of the world ranking in terms of the number of take-offs and landings.

The airport has 5 terminals, 2 of which are practically combined into one.

Baltimore / Washington Airport offers all the services you need on the road: shops, cafes, restaurants, etc. In addition, there are ATMs and luggage storage facilities on the territory of the terminals. There is a deluxe lounge for business class passengers.

The city can be reached in several ways:

The airport has 3 terminals, between which a free shuttle bus runs.

As in most airports, various services are offered to the passenger: shops, pharmacy, post office, ATMs, cafes and restaurants, etc. It is worth saying that the airport does not have luggage storage.

The easiest way to get from the airport to the city is by metro. There are also buses and taxis for passengers..

The airport is located 40 km from the city. Domestic (over 80) and international (over 40) flights depart from here. The largest airline that cooperates with this airport is United Airlines. Dulles airport accepts direct flights from Russia (from Sheremetyevo-2 and Domodedovo airports).

You can get from the airport to the city by metro, bus or taxi.