Home › Articles about the USA › Rivers of the USA - photo, list, description

Rivers of the USA 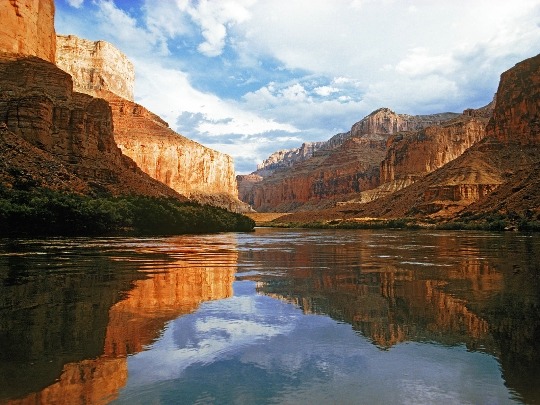 A fairly large number of rivers and lakes are located on the territory of the country. Almost all of the US rivers flow into the waters of one of the three oceans that wash the continent: the Atlantic, the Arctic, or the Pacific.

The Mississippi is not only the largest river in the United States, but also the largest in all of North America. The source of the river is Lake Itasca, and it flows into the waters of the Gulf of Mexico, overcoming a path of 3730 kilometers. Major tributaries of the Mississippi: Missouri; Arkansas; Red River; Ohio; Des Moyenne.

The river is wide in its entire channel, but it reaches its maximum, forming Lake Winnibigoshish. The width of the Mississippi in this place is eleven kilometers.

There are many amazing animals in the waters of the river. One of them is paddlefish. Paddlefish are practically the same age as dinosaurs. The weight of one specimen can reach 70 kilograms, and the length is three meters. But this giant feeds exclusively on zooplankton. Paddlefish are exclusively river fish and never go out to sea. To spawn, they make their way to rocky areas of the Mississippi. The life span of giants is up to 30 years. Both paddlefish and their related American shovelnose are fished on an industrial scale..

Another unusual inhabitant is armored pikes. The body of this giant is covered with hard scales. She is so beautiful that she is used to create jewelry..

This is one of the largest rivers flowing in the northwestern United States. It is also the deepest river flowing into the waters of the Atlantic. The source of the river is the lake of the same name, located in the Canadian province of British Columbia.

Attractions worth seeing while traveling along the river:

The river flows through the southeastern United States and empties into the waters of the Gulf of California. Many are of the opinion that the river was named after the state of the same name, through which it flows. But this is not true, since it was the river that was named that way (its water has an unusual red color) and only then did they share the name with the whole state of the country..

The magnificent Grand Canyon is the "handiwork" of the same Colorado. The water washed its way into a huge layer of limestone, sandstone and shale, creating one of the most beautiful landmarks in the country..

In the river basin is the Mesa Verde National Park. It is interesting because on its territory there are the ancient ruins of the settlement of the Anasazi Indians. The city was abandoned due to severe drought and has been empty for the past six centuries..