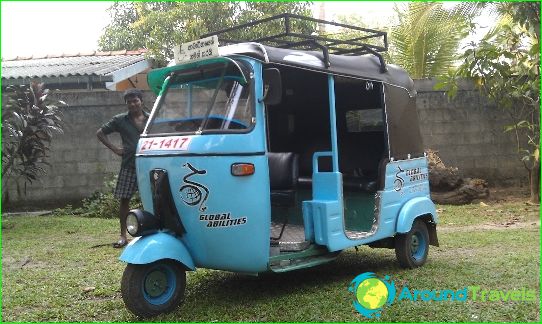 Transport in Sri Lanka is represented by both usual (buses, trains) and non-standard means of transportation (tuk-tuk).

The main modes of transport in Sri Lanka

You can catch a taxi on the street or order it by phone. Some taxis are metered and some have a fixed fare. If the cars are not equipped with a meter, it is advisable to agree on the price in advance before the trip. If you wish, you can move around on tuk-tuks - three-wheeled scooters (it is convenient to travel on them over short distances).

To conclude a rental agreement, you can contact the offices of local or international car rental companies - there you will be asked to pay in cash. As for an international driver's license, it is not enough just to present them - on the basis of this document, an Endorsement by the Automobile Association must be issued. It is worth considering that Sri Lanka has left-hand traffic, and the condition of some roads cannot be called satisfactory..

You need to be extremely careful while driving, since local drivers practically do not comply with traffic rules, and cows and even elephants often come out onto the roads. To avoid fines and other troubles, it is advisable to rent a car with a driver.

Sri Lanka has a well-developed motorway system, so it is best to get around by car in many parts of the island..