Arabian Sea - map, photo. The coast of the arabian sea 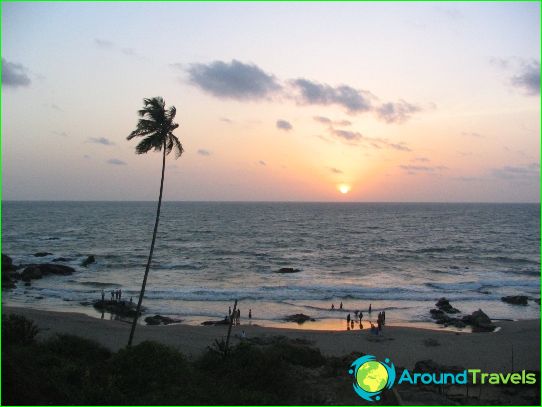 The Arabian Sea is also called the Persian, Oman, Eritrean, Indo-Arab and Green. This is a marginal sea located between the Hindustan and Arabian peninsulas. The southern boundary of this reservoir is conditional..

The map of the Arabian Sea shows that it is one of the largest seas on the planet. Its area is approximately 4832 sq. km. The average depth is 2734 m, and the maximum is 5203 m. The sea stretches in the subtropical and tropical zones of the northern hemisphere. Its waters wash the shores of countries such as Iran, Yemen, Djibouti, UAE, Oman, Pakistan, Lakshadweep Union Territory and India. The largest river flowing into this reservoir is the Indus. There are several large islands in the sea. The island of Masira (possession of Oman) is considered famous, where a lot of sea turtles are observed in summer..

A monsoon warm climate prevails in the Arabian Sea region. The weather conditions are strongly influenced by the climate of Hindustan. On average, the air temperature above the water area varies from +22 to +28 degrees. It does not depend on the season. Sea water has a salinity of about 36.5 ppm. During the summer months, the coast of the Arabian Sea is more humid. The water area is very often affected by typhoons.

The Arabian Sea is famous for its variety of life forms. There are a lot of commercial fish here, among which sardines, tuna, mackerel, marlin and sailfish are of particular importance. For the economies of coastal countries, crustaceans are important: lobsters, crabs and shrimps. There are a lot of corals on the coast. It is also home to molluscs, fish, crustaceans and invertebrates. In the Arabian Sea, there are butterfly fish, lionfish, triggerfish, clown fish, flying fish, gobies, etc. In terms of the richness of the animal world, the Arabian Sea is second only to the Red.

Significance of the sea

Coastal states are actively investing in tourism development. New resorts appear there from time to time. Oman is attractive for tourists, which is visited by more than 1 million foreigners annually. Commercial fishing for sardines, tuna, mackerel and other fish takes place in the sea. The water area is considered an important trading region. Major ports are Karachi, Bombay, Muscat, Aden. Transportation takes place across the Arabian Sea «black gold» from the states of the Persian Gulf to America, Europe, the Far East.

Photos of the Arabian Sea