Malabo is the capital of Equatorial Guinea 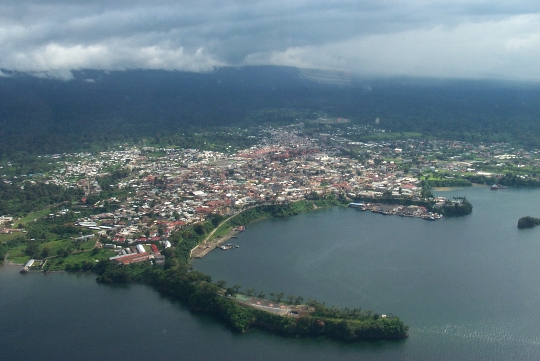 Malabo, the beautiful capital of Equatorial Guinea, unlike many other cities in the world with this status, is located not on the mainland, but on the island of Bioko. Therefore, in addition to government, public buildings and urban development, there is a port here, and one of the deepest in the world. It is quite easy to get to the capital of Equatorial Guinea from anywhere in the world - there is an international airport, the problem is only in the cost of the air ticket.

Indeed, scientists have included Malabo in the list of cities, the climatic conditions of which are considered very unfavorable for humans, especially whites. There is very little rainfall in the capital, especially in December and January, when the level is critical. The average annual temperature is kept at around + 25C °, the lower minimum is + 19C °, this is extremely rare, only in January.

The first name of the island of Bioko, on which the capital is located, was Fernando Po. The Portuguese named it that in 1472 in honor of their captain, who commanded an expedition to this part of Africa. A little later, the colonization of territories began, and it was by Portugal. A hundred years later, the Dutch tried to take possession of the island, but nothing came of it. But everything worked out for Spain, which bought both the island and the mainland in 1778..

In the 19th century, the British appeared here, they founded a small settlement called Clarence Town, now it is the capital of Equatorial Guinea. But the struggle for the land continued, the British, the Spaniards and the local tribe of Bubi took part in the bloody battles.

Modern Malabo is an amazing cocktail of old colonial buildings and modern architecture, brand new hotels in the center and slums on the outskirts of the city. There are main attractions, descriptions of them can be found in every tourist avenue, including: the Cathedral and the Hotel Bahia, which offers stunning views of the ocean and mountains of Cameroon.

The most beautiful building in Malabo and the entire island of Bioko is unambiguously recognized as the Cathedral of Santa Isabel, which belongs to the Catholic Church. The construction of the cult building on the Spanish Square (now it is Independence Square) lasted from 1897 to 1916. He is a vivid witness of the colonial era, reminiscent of the period of Spanish rule.