About, how to fly cheaply to Thailand from Russia, I already wrote. Also on the blog there are a number of articles about moving between different cities and islands, and all the ways of transporting travelers are just mentioned there. However, when it comes to domestic flights within Thailand, only AirAsia is mentioned, although there are several airlines flying in Thailand. Actually, this article is intended to partially fill this gap..

By the way, as it turned out, the Internet is full of outdated information, some airlines simply do not exist anymore, I had to google a couple of days on this topic. Well, and I remind you that it is best to look for tickets in specialized flight search engines: Aviasales.ru or Skyscanner.ru.

The most famous and popular low-cost airline among travelers. The number of destination cities is large, it flies not only in Thailand, but in all neighboring countries. It is Airasia that all fly to Malaysia, Cambodia, Laos, Myanmar, Hong Kong, Bali, Singapore, India, China, Japan, etc. He often holds promotions and you can fly away for a penny. So, if you live in Asia for a long time, subscribe to their special offers mailing list.. 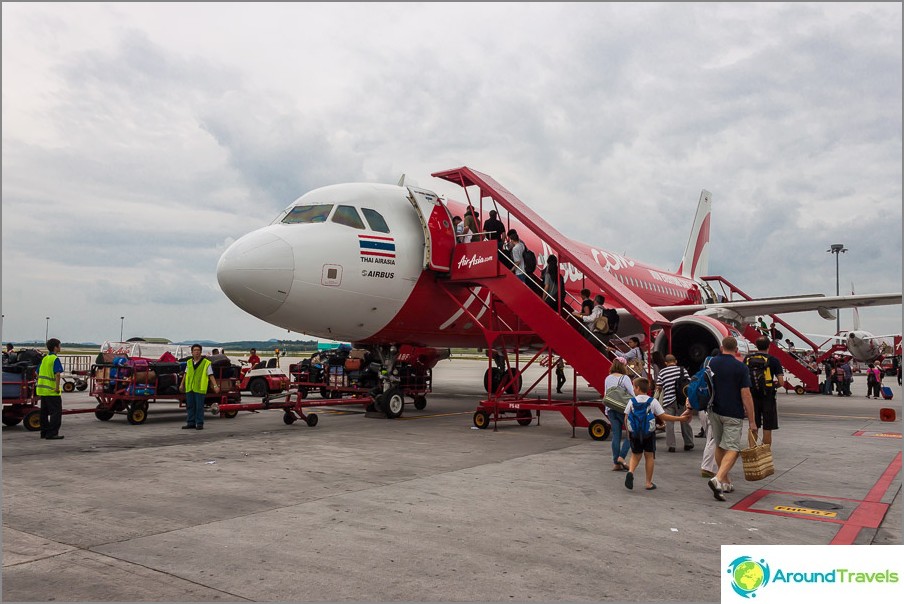 Another popular low-cost airline in Thailand. The cost of tickets does not differ much from AirAsia, and the recall service is excellent. Yes, I myself flew them several times, I liked them more than on AirAsia. It flies mainly only in Tai, the number of destination cities is about the same as that of AirAsia, if we talk about Thailand. The bank card used to buy the ticket must be yourself, as it may be asked at the airport. 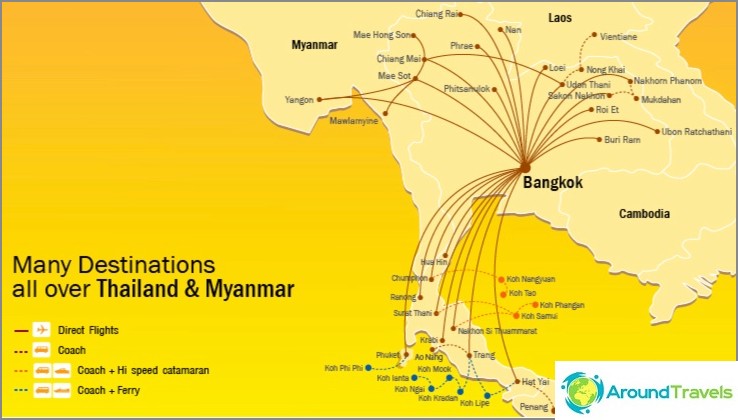 Where does Nok Air fly 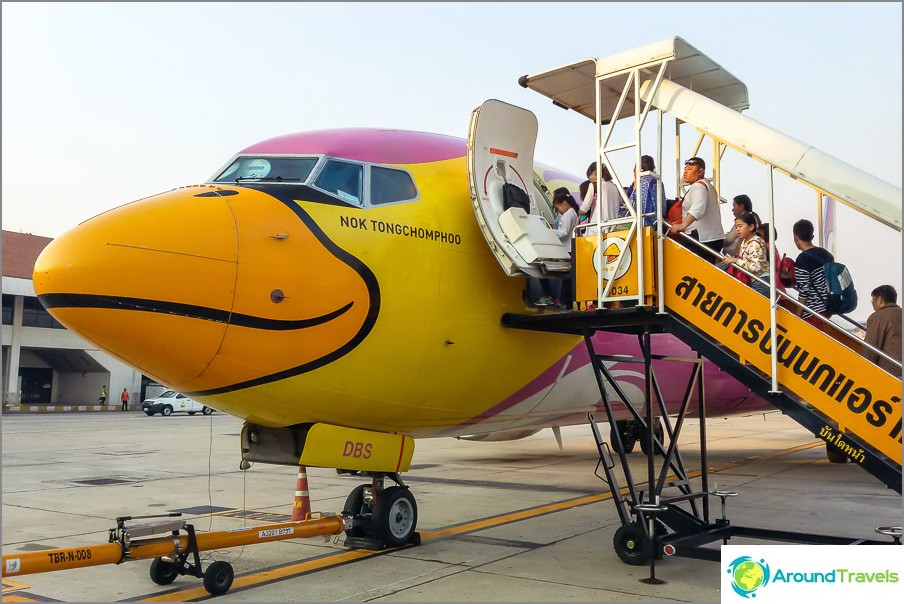 NokAir is a cool airline

Former SGA Airlines. It is flights on small planes in several directions. All bookings and ticket searches are carried out through the Nok Air website, that is, in fact, you don't have to go to the Nok Mini website.

This company is not at all low-cost, so its tickets are twice as expensive as compared to previous airlines. It flies not only in Thailand, but also in neighboring countries (Malaysia, Cambodia, Laos, Singapore, Hong Kong). Unfortunately, only Bangkok Airways flies directly to Koh Samui, so if you want to get to the island quickly, you'll have to fork out. A cheaper option is plane + ferry transfers from AirAsia and Nok Air. 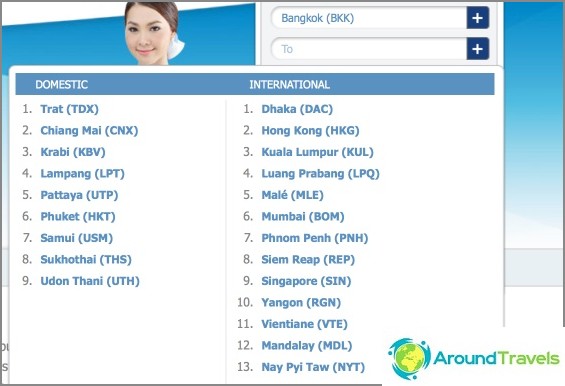 Where does Bangkok Airways fly

They fly all over the world, including flights from Russia to Thailand. Excellent service, everyone praises, but tickets are more expensive than others. In Thailand, prices are about the same as Bangkok Airways or even more expensive. 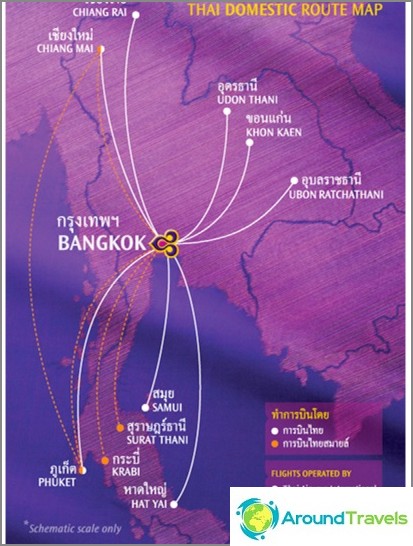 Where does Thai Airways fly

Budgetary division of Thai Airways. It flies mainly in Thailand, but there are also flights to Cambodia, Burma, Macau.

They used to be called 1-2-go. Only flies from Bangkok (Don muang) to Phuket and back. Tickets are inexpensive. And you can still fly to Hong Kong, but only from Bangkok (Suvarnabhumi), as well as in Guangzhou.

It does not fly around Thailand, but it can be useful for those who want to fly inexpensively from Koh Samui or Phuket to Penanag for a Thai visa. If in the case of Phuket there are other options, then only expensive Bangkok Airways flies from Koh Samui..

It flies a lot where (Malaysia, Indonesia, Vietnam, Singapore, Thailand, etc.), routes are on the map, tickets are cheap.

Charter flights, not scheduled. It seems like they have only 1 plane. Book only by phone, you cannot buy on the website. I don't know the prices. They fly from Bangkok to Chiang Mai and Phuket, as well as to neighboring countries (Korea, India, Indonesia, Japan).

A small airline that flies from Chiang Mai to Pai, Mae Hong Son, Nan and Pitsanulok. It doesn't fly every day, so see the schedule. The cost of tickets is relatively high for short distances, but you can fly on Tsesna.

Happy air
www.happyair.co.th
It ceased operations in February 2015. The airline flew to Chumphon and Ranong from Bangkok (Suvarnabhumi) few times a week.

Phuket Air (Phuket Air)
www.phuketairlines.com
Airlines were banned from flying to the European Union for a long time, then flights to Thailand stopped. As far as I know, they do not fly now. There is no information on their website.

Solar Air
http://www.solarair.co.th/
Through the ticket search form on the site, I could not achieve anything except «Not flight route». That is, what this airline is currently offering is unknown. Previously, she flew from Bangkok (Don Muang) to Chumphon, from where people transferred to Lomparaya speedboats and sailed to Koh Samui, Phangan and Tao. But now Lompraya is partnering with Nok Air.

TonleSap Airlines
http://www.tonlesapairlines.com
The company itself is Cambodian, and previously flew from Pattaya to Siem Reap. This was comparable to the price of AirAsia, which flies to Siem Reap from Bangkok, but more convenient if the person lives in Pattaya. The website of the airline at the time of this writing does not open, so what has become of it is not clear.

P.C. Air
http://www.pcairline.com
Their only aircraft was confiscated in Korea in 2012 and has not been flown since..

P.S. Forgot or wrote something wrong? Write in the comments. By and large, it is enough to know AirAsia, Nok Air and Bangkok Airways ...