I am often asked the question of how to fly to Thailand cheaply, where to look for cheap tickets, etc. In order not to answer every time, I decided to write a post about how I do it, so that later I would just give a link. Nothing supernatural, everything is very simple. For your information: I usually fly from Moscow, so it's a little easier for me than for residents of other cities. By the way, I also wrote separately about how you can fly to Samui from Moscow, because it’s not obvious to everyone right off the bat, they ask.

How to fly cheaply to Thailand

The easiest way to fly to Thailand is to buy a regular flight ticket in advance, 2-3 months before the trip. You can start monitoring ticket search sites earlier, or as aggregators call them, but for this it is easier to subscribe to the mailing list of offers. But remember, prices will not always be much lower if straight in advance.

I always use 2 search engines, I see no reason to use something else. There are no flights that they don't show. These aggregators contain offers from all airlines and ticket agencies. There are no additional charges. Below is a block with current ticket prices.

I really like this calendar at AviaSales. In fact, you yourself do not need to look for anything at all, we just look at the desired month and then look in it at what dates it gives out the cheapest flight. But this, of course, is convenient for those who later can adjust to these dates..

Separately, I also want to mention that if you started monitoring tickets, then it makes sense to subscribe to the direction you need, and then you will periodically receive offers by mail. It is very convenient! Enough, a couple of weeks to monitor and see what the price will be, and then buy it. At any time, you can unsubscribe or change the direction of the flight.

There have already been many flights, I will try to list. But you need to understand that prices change slightly every year. Either the dollar rate will change, or there are no shares at all, or just like that. Well, lately, I often sin by buying tickets 1-2 weeks before the trip, so the prices are higher. 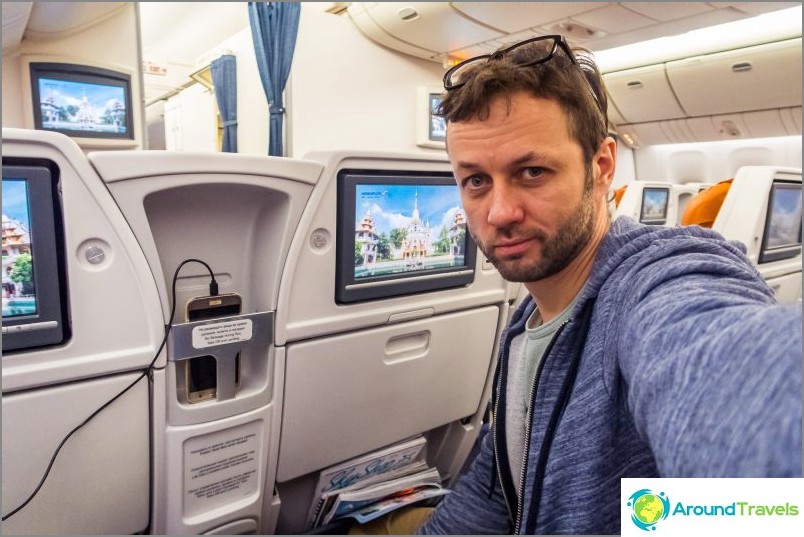 How to fly cheaply to Thailand

!!! Remember the need return ticket to Thailand, if you don't have tourist thai visa.

After the departure of Transaero with charter tickets, things got much worse in terms of price. Aeroflot, Nord Wind, Royal Flight, Azur Air rarely give really good prices. Russia has recently started flying and there are sometimes cheap one-way tickets. But so far, most often it is cheaper by regular flights with a transfer, especially if you buy a round-trip ticket right away..

Remember the rule. You can fly from Thailand on a charter only if you also arrived by charter. At one time, no one checked this, but now, since 2017, they have become. Perhaps, if the entry was by land (for example, after a visa), then this rule will no longer apply, but not a fact.

There is such a thing as last minute charter flights. Their plus is a direct flight. And the minus is that you have to fly out a couple of days after the purchase. Of course, this is not suitable for everyone, since the departure can take place a couple of days after the purchase of the ticket (although it may be in a week) and tickets are generally easier to find for departure from Moscow. So, if you are not tied to a date, then this is your option, you can save money (when compared with direct flights). Moreover, if you fly in charters in a countercurrent flow to the main tourist masses (in the spring to Thailand, in the fall to Moscow), then the cost will be really very low, I came across prices of 50-200 bucks one way.

Where to find charters

A charter, first of all, is good because the cost of a ticket is cheaper than for a similar flight, but not a charter one. And the second plus is a direct flight at the price of a regular flight with a transfer (a direct regular flight will be much more expensive). Search basically in two places:

I have bought tickets on the stock exchange more than once. More precisely, the purchase did not take place on the exchange itself, because these are just text ads from travel agencies (you need to call the specified contacts). Alternatively, you can go to the websites of travel agencies themselves, they also have a section «Last minute tickets».

It is now inconvenient to write about prices, because on the stock exchange everything is almost always indicated in dollars, and the rate has changed almost 2 times since 2015. But at the same time, the price of tickets in dollars decreased, and increased in rubles. That is, tickets in rubles have risen in price, but not twice, which is already good. In this regard, I will write you prices in rubles, so it will be clearer.

Examples of my charter flights are below. True, I always flew only in one direction and did not really get into the cheapest options, rather the average.

I didn't always buy the cheapest ones, because the dates also played a role. Literally fresh - a ticket Moscow-Phuket on May 8, 2017 for 3900 rubles. There were other dates for a month, but I just returned from Thailand. Eh ... I want to cry from such prices, and why I never get to them? 🙂 That is, in general, such prices are found, but rarely and you should not rely on them.

Ticket from Thailand for 70 bucks

By the way, a burning ticket does not always happen with a departure a couple of days after purchase. Last time I even managed to issue Thai visa in Moscow after buying a ticket.

Remember, if there are no last-minute tickets, then as an option then watch last-minute tours. Their prices can be very low. Our friends once bought a similar tour to Pattaya for 20,000 rubles per person. This is a round-trip ticket, accommodation in a cheap hotel, free breakfasts and airport transfers. In principle, for such a price, you can only use a one-way ticket from this set.

How to buy a return ticket to Russia while in Thailand

With regular flights, everything is clear - wherever you are, the purchase takes place through a search engine using a bank card.

With charters, everything is different, they are sold by travel agencies. The sequence is as follows: monitor Tourdom, as soon as the desired ticket appears, contact the travel agency by email or by phone (via Skype, so it is cheaper), and ask how to pay for the ticket. There are several options:

Actually, the last method is the most successful. And although I wrote that the transfer can take a long time (and they usually book for a day), I think they can hold off the reservation for you, since they offer this. I found out about this in 2013, because in 2011, when I was writing this article, something never came across an agency ready for remote payment, and we had to go to the office in Phuket to give cash to the agency's partners.

Supplement for those who do not live in Moscow

I would like to supplement the article a little, as I receive questions from residents of other cities. Unfortunately, I can't advise you much, since almost all my flights from Moscow.

Most likely, you will not have to rely on very cheap tickets. Flights from most cities will be more expensive than from Moscow, this applies to both regular flights and charter flights. Moreover, with burning charters, there will most likely be a general disaster; in addition to Moscow, tickets from Novosibirsk or Yekaterinburg rarely slip at Turdom. What pleases, before they were not at all, but now there is at least something, the trend is in the good direction. Now even a separate section by region has been made - Turdom-regions.

So the basic rule is to watch departures from neighboring large cities if you live in a small city. For example, once from Novosibirsk and Krasnoyarsk there were very cheap tickets for regular flights from S7 airlines. They were even cheaper than from Moscow. Something in the region of 10,000 round trip. Therefore, the likelihood of a cheap flight to Thailand is also from Siberia. It is important to monitor tickets in aggregators, on the websites of airlines, on Turdom, and get here at such prices.

It also makes sense to find travel agencies in your city, call them and see if they have any last minute tickets or tours. Sometimes even the tour is so cheap that no regular flights are needed. True, the cost of the tour can be comparable to a one-way ticket, then you can safely score on a return ticket, for accommodation in a simple hotel in Pattaya and for free breakfasts, and immediately upon arrival in Bangkok go wherever you need.

P.S. Good luck to all of us in finding cheap tickets to Thailand 🙂