Excursion to Abu Dhabi in Russian - my review and prices

Since I flew to the UAE on a tour (the link is my review of the tour) and there was little time, then it was decided to take 2 sightseeing tours: in Abu Dhabi and Dubai. So you can get a general idea of ​​the Emirates in a short time..

I will definitely return here on my own (or maybe again with a tour) and take a more detailed and thoughtful look at some of the sights. And now about the excursion.

All excursions in the UAE begin after 11.00 and end late in the evening, at 22.00 - 23.00 hours. And this is no coincidence. In order not to waste time in traffic jams and not to irritate tourists, excursions are planned so as not to get into morning and evening traffic jams, and we appreciated it.

The buses are comfortable, the visibility is good, the guides are Russian-speaking and well-trained. None of our questions remained unanswered.

So, the tour of Abu Dhabi is perfectly organized - never got stuck in traffic jams. The guides are wonderful! They give a lot of information, not only historical, but also about traditions, the way of life of the local population, the rules of behavior for guests of the country. The bus is cool and there is free water in bottles of 0.5 liters.

Of course, there is a lot of information for one day. But now I have an idea of ​​the capital of the UAE and I can plan my next trip to Abu Dhabi.

The price for a sightseeing tour of Abu Dhabi - $ 55, from the tour operator AnexTour, was purchased from a hotel guide. And I bought the tour from Travelata, it was the cheapest way (my instruction how to buy).

For the first trip, in my opinion, sightseeing tours are most suitable to see several of the most important objects at once in 1 day and see the city. But then it already makes sense, either to take unusual excursions on the Tripster, or to visit one or another attraction on your own.

The largest and richest emirate is Abu Dhabi. It occupies 85% of the entire territory of the emirates, and more than 90% of oil is also located in this emirate. But what's interesting is that most of the territory of the Emirate of Abu Dhabi is desert! We can say that all life is focused on the coast of the Persian Gulf.

The state in its current form is less than 50 years old, it was created on December 2, 1971. In general, the history of this state is unique, in 50 years a path has been passed from Bedouin tribes to a developed state with the highest standard of living.. 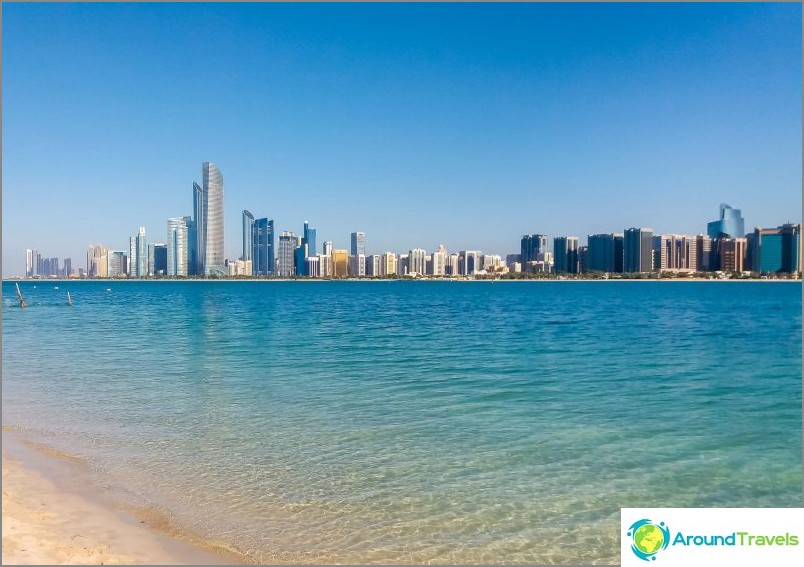 What was the life of the indigenous population of the UAE before the discovery of oil, we saw in the Historical and Ethnographic Village (Heritage Village). It is located on the Corniche Breakwater artificial spit..

There is a small museum on the territory of the Heritage Village. And judging by the old photographs in it, the life of the Bedouin tribes in the desert was rather miserable. Huts made of palm leaves, sheds made of sheep skins, structures made of clay and pieces of cloth or twigs ... But on the coast, the locals, who were engaged in the extraction and trade of pearls, were more prosperous people..

You can also see the boats on which the pearl divers sailed. Also, the museum displays household items, weapons, jewelry. 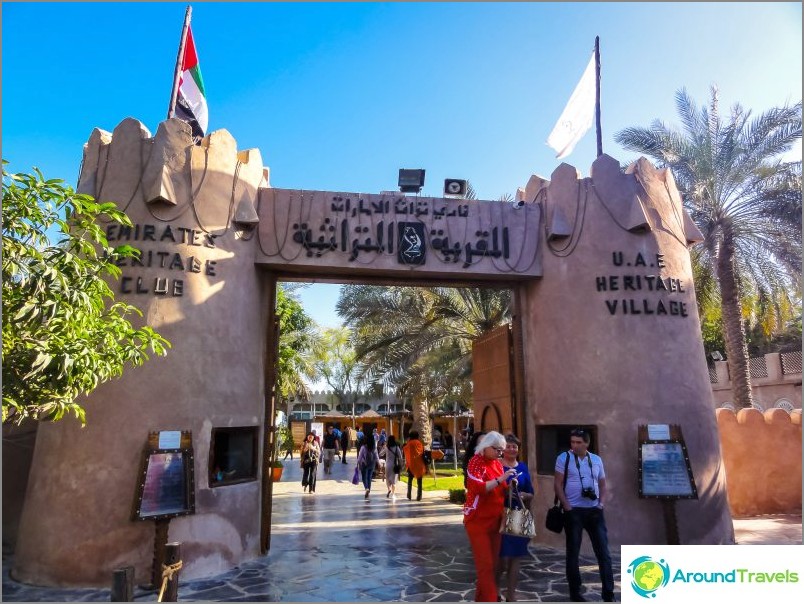 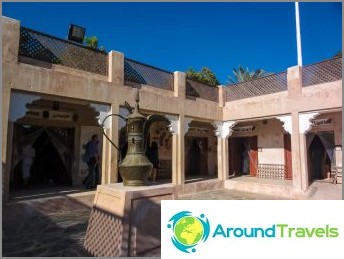 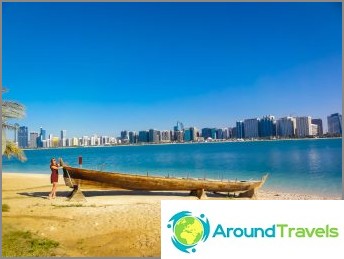 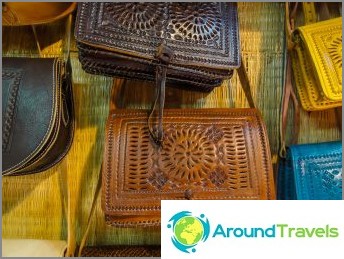 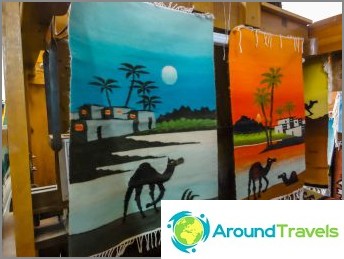 Be sure to go to the workshops, where you make leather handbags, weave carpets, forge daggers. And, of course, all this beauty can be bought, but not cheap! Yes, and go down to the beach, where the water is of extraordinary beauty and stunning views of the city.

Admission to the open-air museum is free. The area is shady with benches and small fountains, where you can eat, drink tea or coffee. One drawback - there were a lot of tourists on our arrival, although some photos on the Internet show that it is not crowded here.

Driving through the city, one thought is spinning in my head - this is fantastic! Especially when driving along the Corniche Beach. You ask yourself the same question, but there was definitely a desert here, and you can't believe your eyes.

For about 10 km along the Persian Gulf, there are gardens, flower beds, parks, fountains, playgrounds, bike paths, and well-equipped beaches. Each bush is supplied with a drip irrigation hose, and this despite the fact that water in the UAE is desalinated from the Persian Gulf!

Discount prices for tours in the UAE>

And since Abu Dhabi is located on an island, you constantly cross some channels, straits, in a word, it is difficult to convince yourself that you are on the Arabian Peninsula.

Unfortunately, the sightseeing bus does not stop at the embankment, but it would be nice to take a leisurely walk here in the evening when it is not hot. So the photos turned out to be blurry, as they were taken from a bus at a speed of 60 km / h. 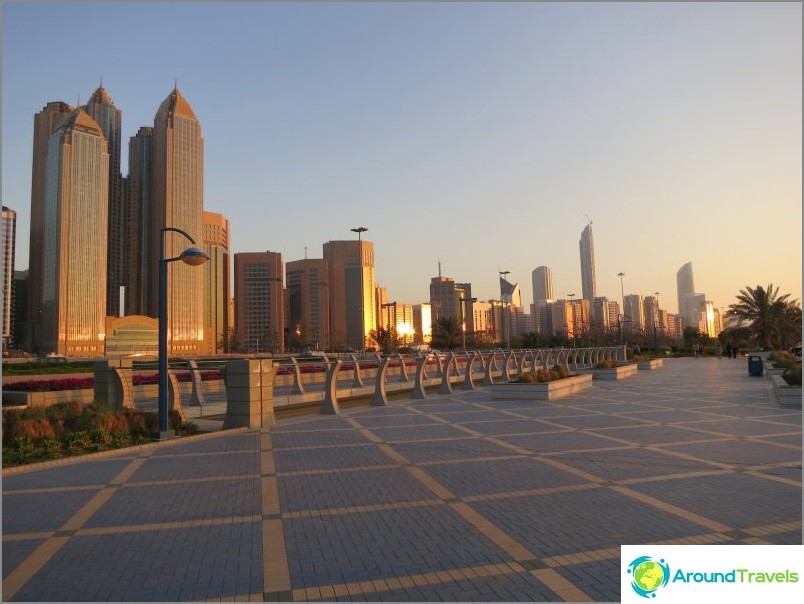 We were not inside, it is impossible to grasp the immensity in one excursion! But we learned that the towers contain hotels, offices, boutiques and an observation deck on the 75th floor. Added to the list of places where you need to go on your next visit on your own.

We took a photo and dined nearby, at the five-star Bab Al Qasr Hotel, you can ask the price for the rooms. We rested in the cool and well-fed and satisfied went to the main object of our sightseeing tour of Abu Dhabi.

The hotel itself is luxurious, but lunch, I would say, is the most common: a buffet, there is a choice of dishes, but not large, there were 2-3 types of desserts in general. In a word, tourists, «spoiled» Turkish all inclusive, lunch was not impressed. 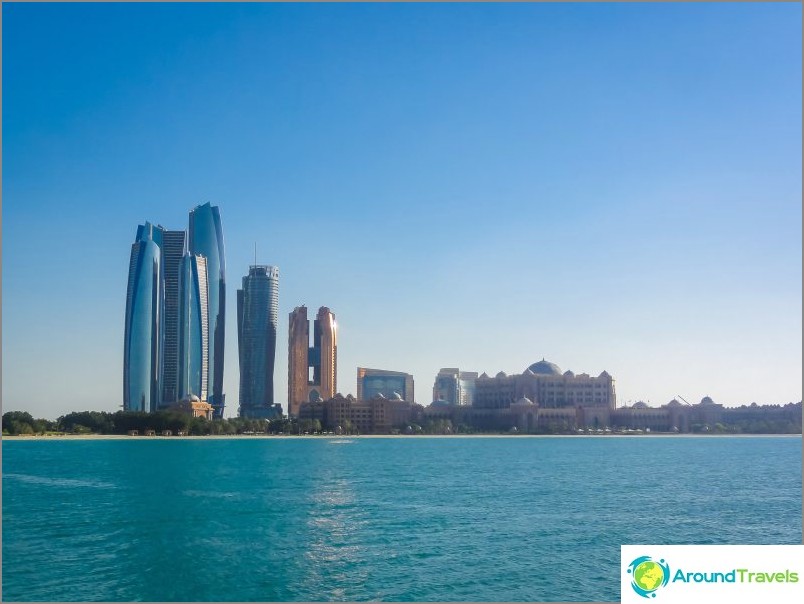 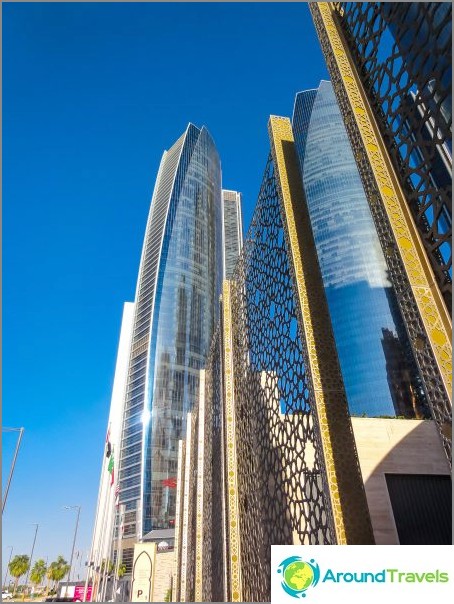 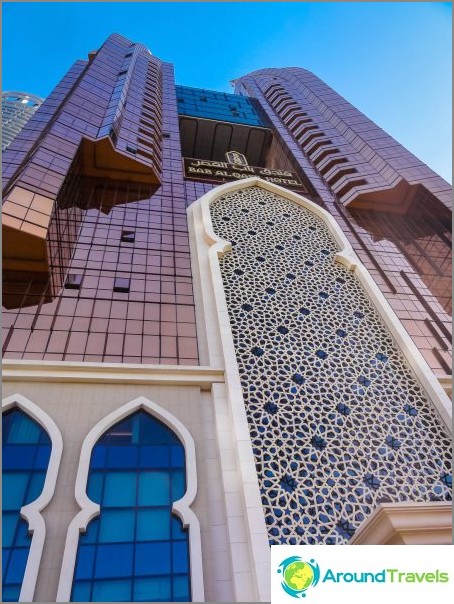 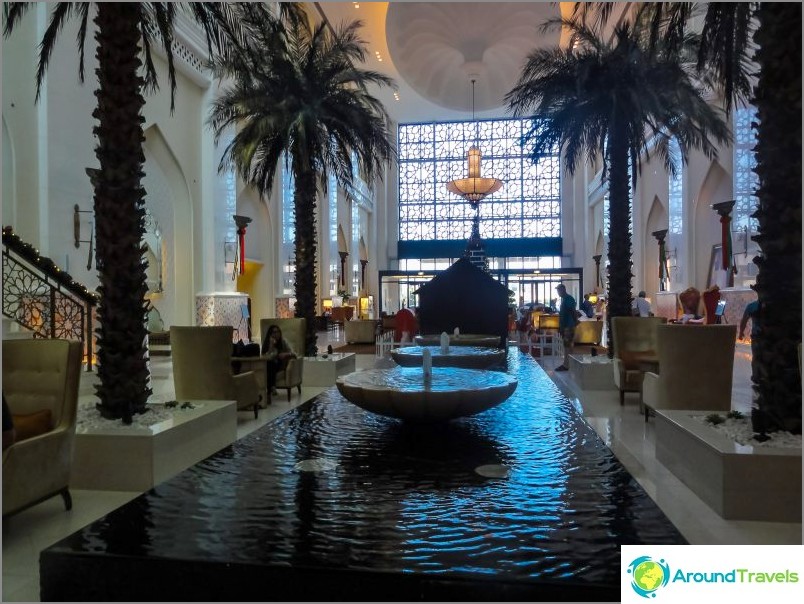 Before going to the White Mosque, the guide gave all the women abayas - black closed Arab dresses. We put them on over our clothes, as well as black scarves on our heads. The men did not have to change anything in their appearance, it was enough pants and shirts. The main thing is that the clothes reach the ankles..

By the way, at the end of the excursion, returning the dresses, we came to the general opinion that abaya is very comfortable clothes, thin, easily blown and not hot at all. Moreover, the local population does not walk the streets here, only by car. And there are air conditioners everywhere in the premises.

The entrance to the mosque is free, available to people of any religion. But first you need to go through security checks, like at the airport, and individually answer a number of questions on the monitors. After that, go a long way along the underground passage from the inspection zone to the mosque itself. 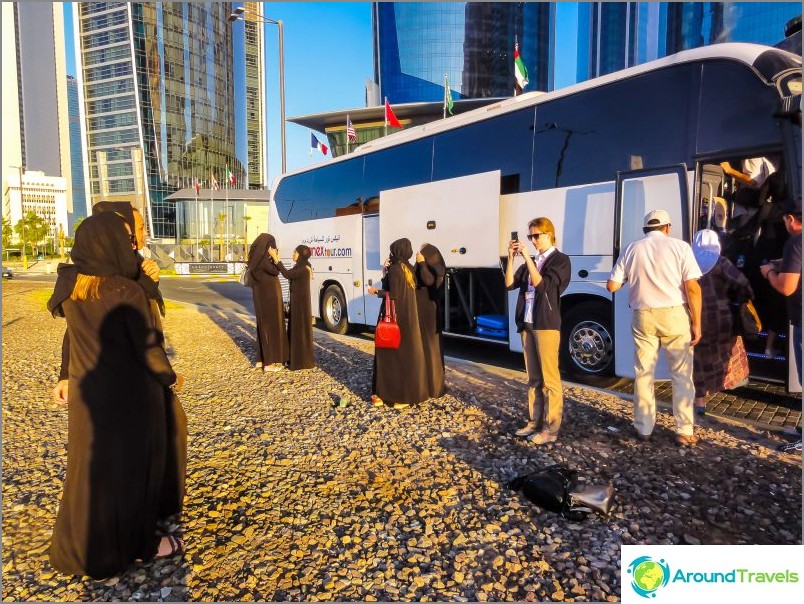 And here we are at the Sheikh Zayed White Mosque! It is difficult to describe, you must, of course, see her! The size of the mosque, the luxury of decoration, richness of decoration, evening illumination, all this amazes the imagination!

It was built in 2007, since 2008 it has been accessible to all comers. Named after the founder of the United Arab Emirates Sheikh Zayed.

The mosque is the largest in the Muslim world, the most luxurious. The walls and columns are decorated with precious stones and gold leaf, chandeliers inlaid with Swarovski crystals, magnificent mosaics on the floor and walls. Well, the world's largest handmade carpet is also here! I wonder how they laid it, so huge ...

The exits from the underground passages to the parking lot of our buses, I would compare with Faberge eggs in beauty. 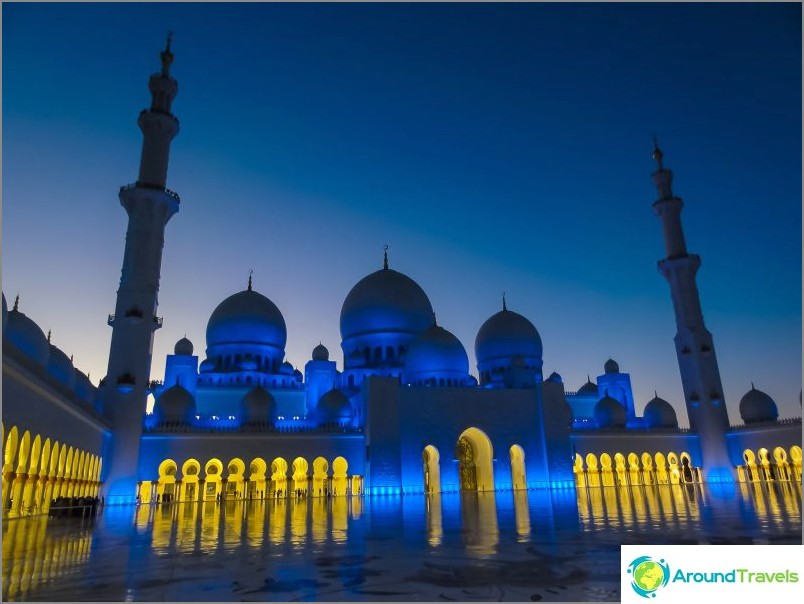 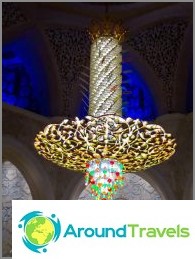 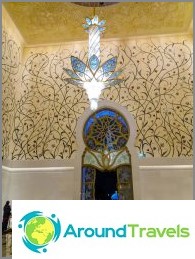 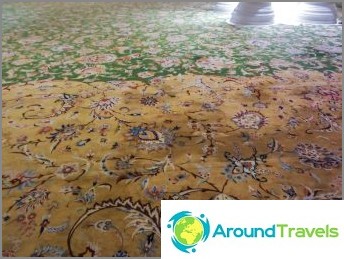 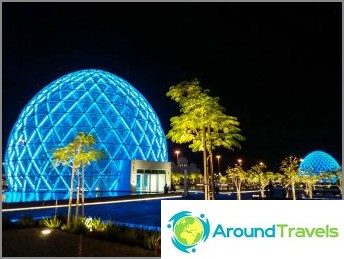 On the way out of Abu Dhabi we passed the Mangrove Reserve. How nature created such a miracle, a green oasis in the middle of the desert, remains a mystery. The territory is protected by the state, but you can get there with a guided tour.