So, the long-awaited tour to the UAE has been bought (my instruction how to buy cheap), documents in hand, went to the airport. We took off from Vnukovo airport exactly on schedule, by plane Boeing 737-900ER. Looking ahead, the trip was great! There was one nuance, but more about it below.

We flew a little over five hours. The plane is new, but a bit crowded. By the way, on the way back, the captain of the ship entertained us with historical and geographical information about the countries and cities over which we flew, for which he received a standing ovation at the end of the journey..

Meals on the plane are standard: first, juices, water, then a hot lunch with a choice of two courses (with meat or chicken), tea, coffee. 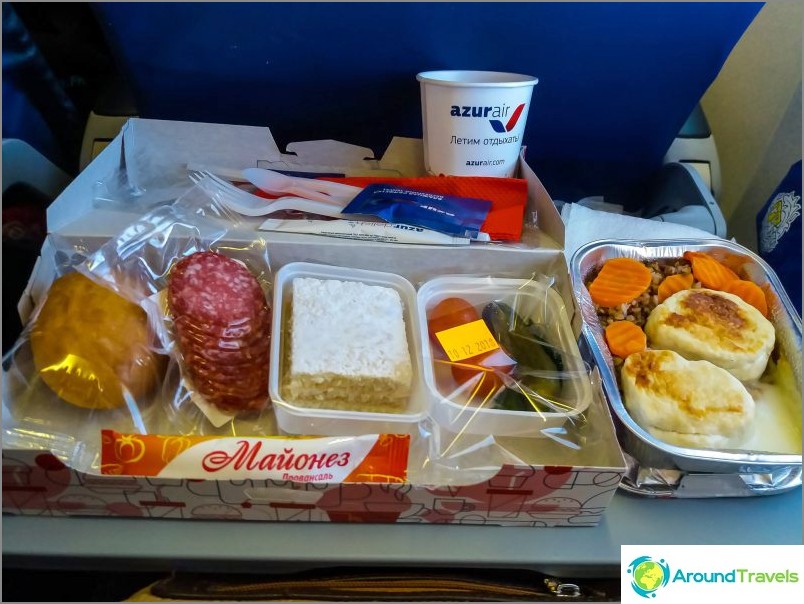 We arrived at Terminal 2 of Dubai airport. This terminal is intended for charter flights and flights from neighboring countries. The terminal is modest, but the audience is very colorful. I remember a grandfather with a harem, who glared angrily at tourists in shorts. Uh, the type is straight for movies.

Terminal 1, the most famous and beautiful, is located on the opposite side of the airfield, and we did not see it, which is a pity.

The entire passport control procedure took no more than half an hour. The terminal is small, the distances are short, there are signs everywhere: passport control, scanning of the retina and a stamp in the passport, then the hand luggage is shown through the sign, and then we get luggage at the sign. Everything! Insurance, voucher ..., nothing was asked. You do not need a visa, we enter the country with a stamp in the passport.

There are exchangers in the arrivals hall, but from the reviews I knew that it is better to change in shopping centers. There is also free wifi, immediately sent a message to the family about a safe landing.

Immediately at the exit to the Arrival Hall, a representative of the tour operator, in our case AnexTour, meets with a sign and directs you to the buses. Moreover, every 50 meters there are representatives in their recognizable branded clothes and are practically escorted to the bus itself, so it is impossible to get lost.

We present our voucher and go to the hotel in Sharjah. The buses are comfortable and air conditioned. The transfer from the airport to the hotel took 25-30 minutes. One of the advantages of Sharjah is that it is located not far from the airport. There are even cheaper Emirates, so it's much longer to go there..

On the way to the hotel, the representative of AnexTour appoints the time of meeting with the hotel guide for each hotel, answers questions kindly enough, but in general, the guides of this tour operator are not smiling, you immediately understand that they are at work ... 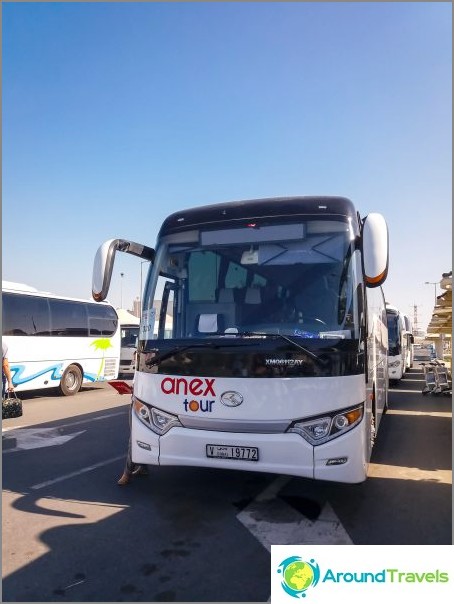 Accommodation at the hotel Al Bustan 4 *

A detailed description of the hotel is on the Internet, so later I will write in detail only about my assessment of this hotel, especially since I have experience of living in 5 *, 4 * and 3 * hotels. Accommodation is fast, I gave my passport to the reception, signed and took a card from the room.

We were first given a room on the first floor, asked for a higher one, and gave us a fourth floor without any problems. Didn't fill in anything, just asked to come in for a passport later. They brought suitcases from the bus to the room.

While on the bus, the guide warned that on the day of arrival, breakfast is not included in the tour price. arrived in the afternoon. An AnexTour representative is nearby during placement and helps if there are difficulties in translation.

Standard room, double - fully corresponds to the description on the tour operator's website. We only had breakfasts, and that was enough because the whole day we were not at the hotel. The swimming pool, sauna in the hotel are located on the roof and are open from 9.00 to 19.00. 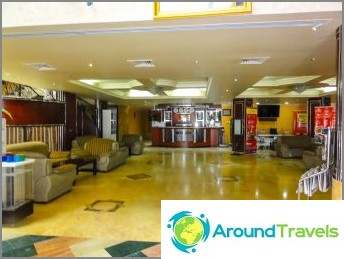 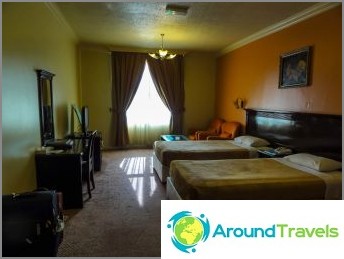 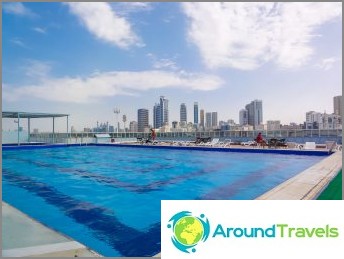 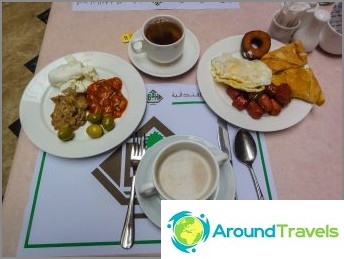 There was a transfer from the hotel to the beach: there - at 9.00, back - at 13.00. You can also walk about ten minutes on foot. The reviews wrote that the beach is very close, but at the time of arrival there was a construction site nearby, which had to be bypassed, therefore, 10 minutes.

The sea is clean, the entrance to the sea is shallow, there are few people. But the infrastructure on the beach is not very good. But, most likely, it is a matter of time, Sharjah is developing at a very fast pace.. 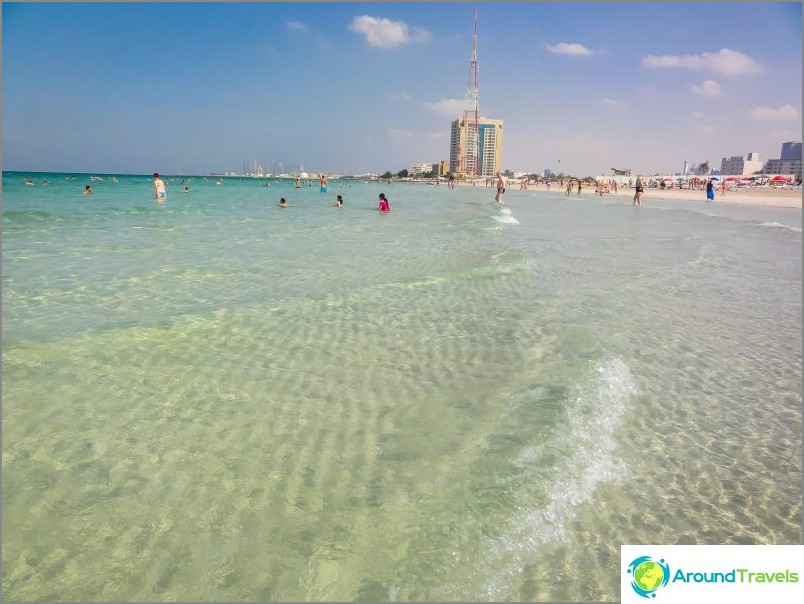 What we managed to see in the UAE

So, the next morning we had a meeting with the hotel guide, Mamed, who speaks excellent Russian. We exchanged phone numbers for communication in messengers and received comprehensive information on excursions. Since we are for the first time in the UAE, from a large list of excursions we have chosen 2 sightseeing tours in Abu Dhabi and Dubai (from the tour operator AnexTour) in order to have an idea of ​​the country.

Sightseeing tour of Abu Dhabi ($ 55) includes a city tour, observation deck, a visit to the Heritage Village, lunch at Bab Al Qasr Hotel 5 * and a visit to the Sheikh Zayed White Mosque.

There is a lot of greenery in the city: parks, lawns, embankments, you involuntarily forget that the city was built in the desert. Of course, the excursion program is very rich, there is no opportunity to stop and contemplate, but in conditions when you come for 5-7 days, and you want to see the country, this is the best option. And delight and admiration are provided for you!

Later, when you come for the second and third time, you can do without the views and inspect everything yourself, hanging in each specific place as much as you want.

More about excursion in Abu Dhabi.

More about the excursion to Dubai. 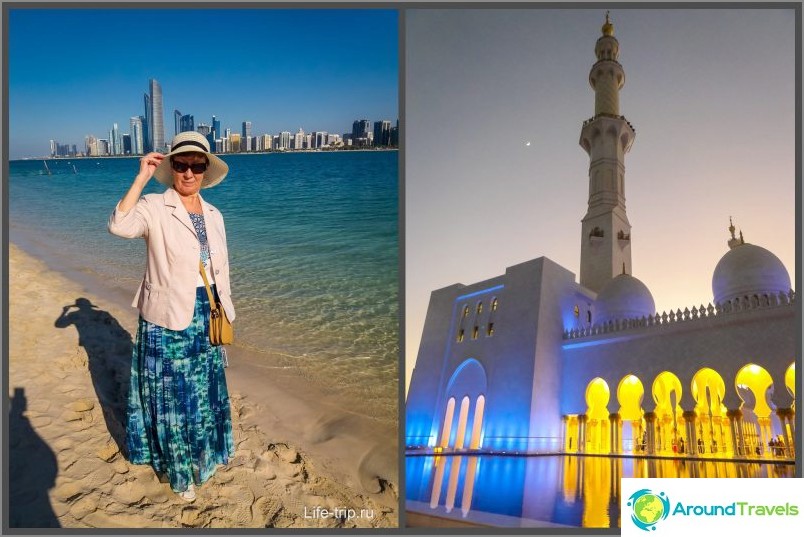 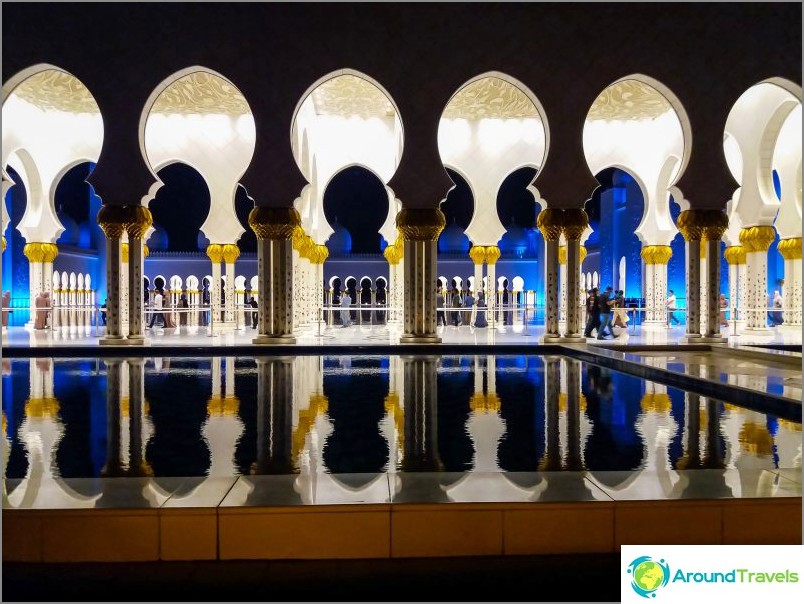 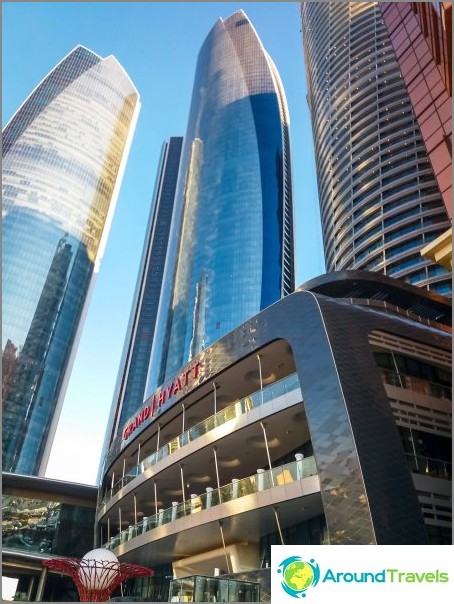 The second excursion to Dubai ($ 120) gave me a culture shock. City tour, photos of hotels famous not only for their price, but also for their architecture, such as Jumeirah Al Naseem Madinat 5 *, a visit to the Arab market and an amazing place called Dubai Venice, the artificial island of Palm Jumeirah, as well as the Dubai Marina District and dinner at yacht ... Finally, we looked at the fountains in Dubai Mall and climbed the highest tower in the world Burj Khalifa on the 124th floor!

You can exclude from the cost of the excursion dinner on a yacht ($ 40) and climbing the tower ($ 50), then the excursion will cost only $ 30. But I didn’t do it in a time pressure situation. Of course, if you have arrived for a long time, or it is not the first time in the UAE and have seen a lot of things, then you can save money, for example, climb the tower on your own, without a tour and in the daytime. 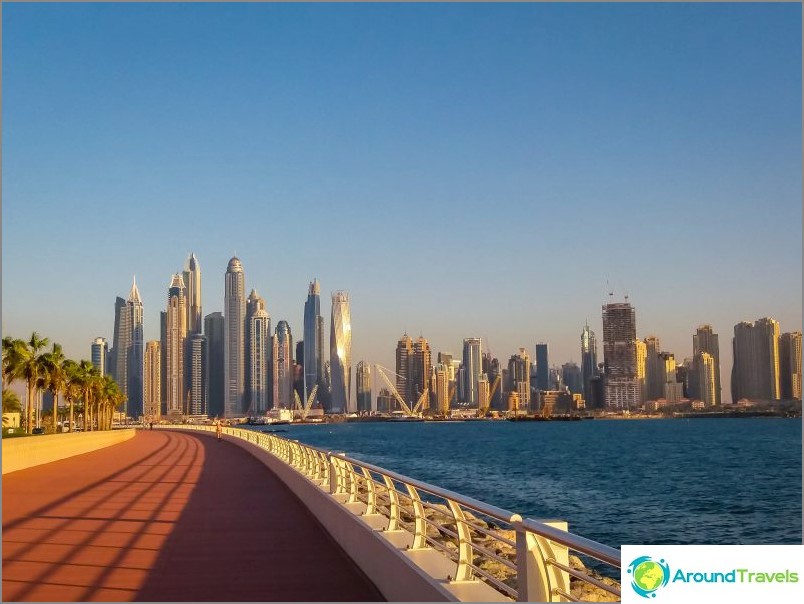 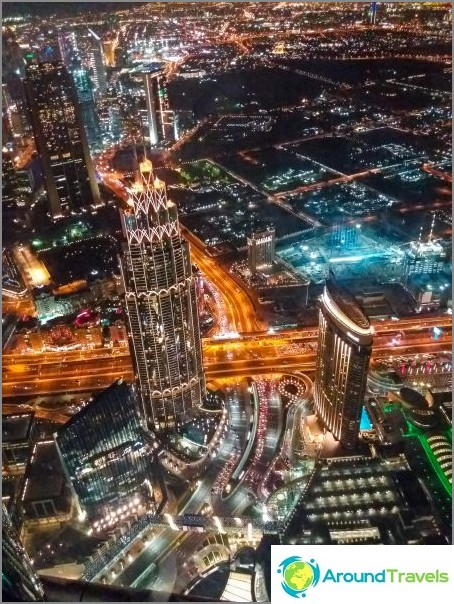 Guide Mamed offered us another free trip to shopping centers of our choice. But since we were not interested in shopping on this tour, we said that we were not interested in shopping centers, but we would have gone to the Arab market for hotels on our own, since we had heard about local dates in chocolate. We just need information where and how to get there..

Mamed said that there are no problems, we can take you not to the shopping center, but to the market for free. And then there was a bummer, intentionally or not, I don't know! On the appointed day, a car arrives with a silent driver, reluctant to speak only Arabic, and takes us to a shopping center selling fur.

Already on the spot, an unpleasant showdown followed. In fact, this was the only unpleasant moment from AnexTour (although maybe this is a jamb of a particular guide). And even the point is not that perhaps they tried to cheat us for money, but it was simply a pity for the lost evening, since we had very little time, every day counts.

In Sharjah, unfortunately, we had little time to see, there was not enough time. But they managed to go to the Aquarium and the Maritime Museum on their own on the last evening. If you live in Sharjah, I recommend visiting.

There is also a small park with fountains and children's attractions. Near the embankment with beautiful views for photo shoots. The Aquarium has a cafe and a large balcony as an observation deck. The ticket price is 25 dirhams. This is also the entrance to the Maritime Museum.. 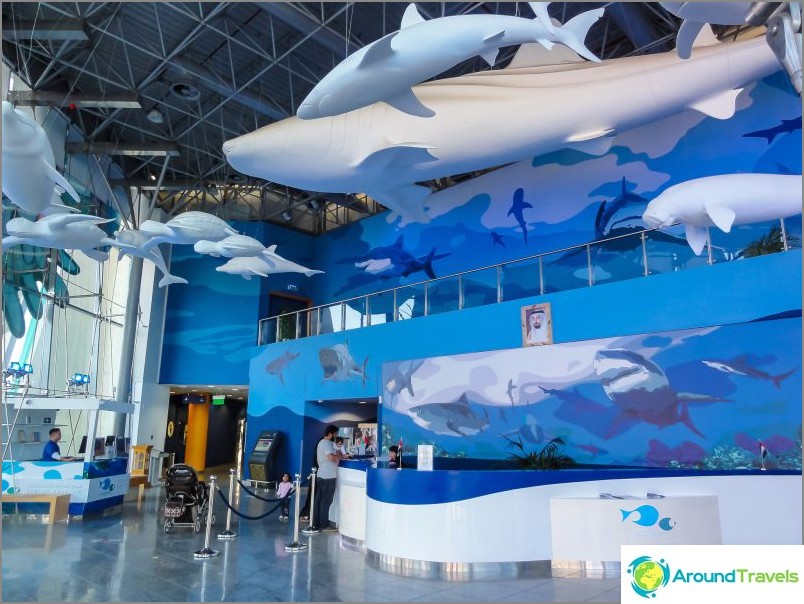 The return transfer went smoothly, the flight was not rescheduled, preliminary in the evening at the reception there was information about our flight. In the morning, after breakfast, the bus arrived at the appointed time.

We were at the airport 2.5 hours before departure. The AnexTour representative took us to the check-in counters, and we happily said goodbye to him. And then ..., we checked in our luggage, passport control, everything is very fast! In the departure hall, I really liked the small, neat carry-on trolleys. Comfortable! Departed on time! 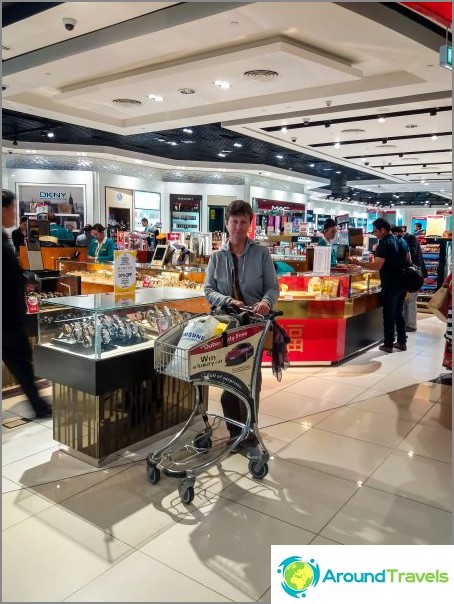 Here is such a successful trip I had in December in the UAE from Travelata! No negative, one positive! I am already planning my next trip to the Czech Republic!

Excursion to Abu Dhabi in Russian - ...