The sculpture itself is original - here I do not argue. But not the quality of workmanship or the elegance of the lines, but the unusual placement. Put this sleepy uncle in the corner of some side street, and he is unlikely to appear in the tops of tourist portals. And here, in the center of Prague, you raise your head, and a man hangs over you on one hand.

And it’s good if you went here deliberately, for a photo as a souvenir. And if not, then panic immediately, excitement, where to run and how to catch - it is difficult to remain indifferent. That is, in fact, the calculation. Well, in addition to the wow effect, a certain aura of rebelliousness is triggered here, which was created around the name of the author of the sculpture, about which - below.

My personal impression of Freud is hanging. Yes, it hangs. If you are not aware that this is Freud, then you will leave here with this only thought - the statue is hanging. Well, maybe you will spend some time thinking about what will happen if it falls from there on the head of passers-by and, just in case, you will not pass under it.

However, people trained by the Internet are looking at the statue with genuine interest, and in the faces of some of them, serious work of thought can be read. Probably something about the abyss of the unconscious, about the illusory nature of life, about a saving straw and other meaningless things that do not make our life easier, but take time and nerves.

What did the Black himself want to say? Who knows. This guy put ten two-meter, black, faceless babies on the Zizkov TV tower. Everything is possible here. 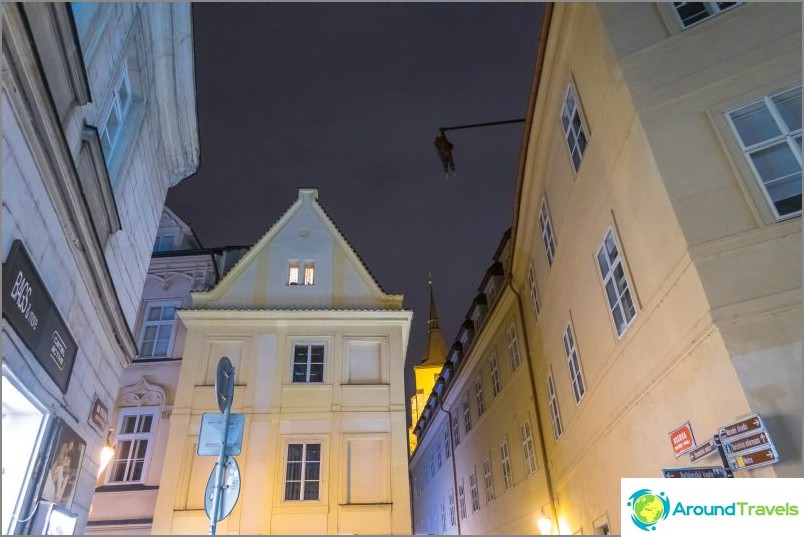 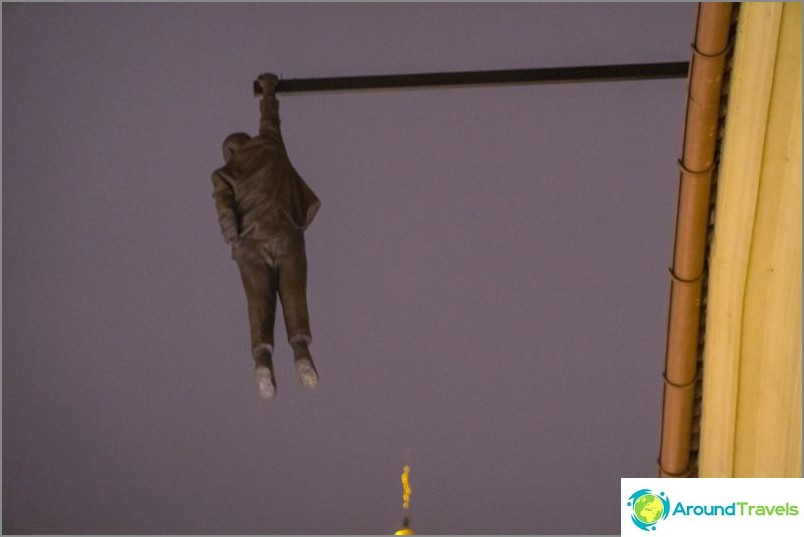 In Czech, the sculpture is called «Viselec», which literally means «Hanged». Honestly, after googling the history of the attraction, I unexpectedly found out that the biography of its author is much more interesting than the subject of our conversation.. «The Hanged Man» created by David Cherny, for an exhibition in the late nineties.

After a world tour, the statue returned to Prague and hung forever on the roof of the house, on Jan Hus Street. Not a lot?

On the one hand, a freak, on the other, a recognized talent and author of many sculptures that are scattered throughout Prague.

The sculpture is located above an ordinary city street and is available for inspection 24 hours a day. But it is better to come during the day when the lighting is good. Freud does not have a separate highlight.

The Hanging Man Statue
A man hanging by one hand on a pole that sticks out of the roof of a house. The author of the sculpture claims that this is Freud, hanging over the abyss of the Unconscious.
More about hanging.

A man hanging by one hand on a pole that sticks out of the roof of a house. The author of the sculpture claims that this is Freud, hanging over the abyss of the Unconscious. More about hanging.