Home › New articles › How to get from Bangkok to Hua Hin and back - bus, minibus, taxi

How to get from Bangkok to Hua Hin and back - bus, minibus, taxi

One of the closest resorts to Bangkok is Hua Hin, just 3 hours away. There is also Bang Saen closer, but it is completely Thai, the beaches there are worse and the atmosphere is also different. Hua Hin is a very pleasant place, it is not for nothing that it is the resting place of the king..

There are several ways to get to Hua Hin: minibus, bus, train, transfer, taxi, plane. Some tickets can be bought online.

Minibus (or they are also called minivans) to Hua Hin runs from several places in Bangkok:

Accordingly, which place is closer to you, from there you need to go (How to get to the bus stations in Bangkok). The cost is about the same everywhere and is 180-200 baht per trip. Travel time is about 3 hours. They go often, once every half an hour or an hour, but as the car fills up, somewhere from 5 am to 7 pm. They come straight to the very center of Hua Hin and drop off directly at Phetkasem at the intersection with Naeb Kehardt near the central temple of Wat Hua Hin. This place is also called the Clock Tower - the clock tower. And almost from here (literally 100 meters) they go back to Bangkok.

Please note that minibuses are cramped inside, and with a large number of things, as well as poorly tolerating cramped conditions, it is better to go by buses and taxis.

Since October 2016, minivans no longer run from here to other cities in Thailand. The military junta fought the traffic congestion in the square caused by the 4,000 minibuses that created what was essentially an illegal bus station in the middle of the city. The minivans have been split between Bangkok's three main bass terminals, and there are now free shuttles from Victory Monument to those three bus stations. Shuttles run from 4:30 am to 8:30 pm every 20 minutes.

If you live in the Khao San Road area, then go to any travel agency and ask for a transfer to Hua Hin. It can be either a bus or a minibus. Prices are only higher than elsewhere. 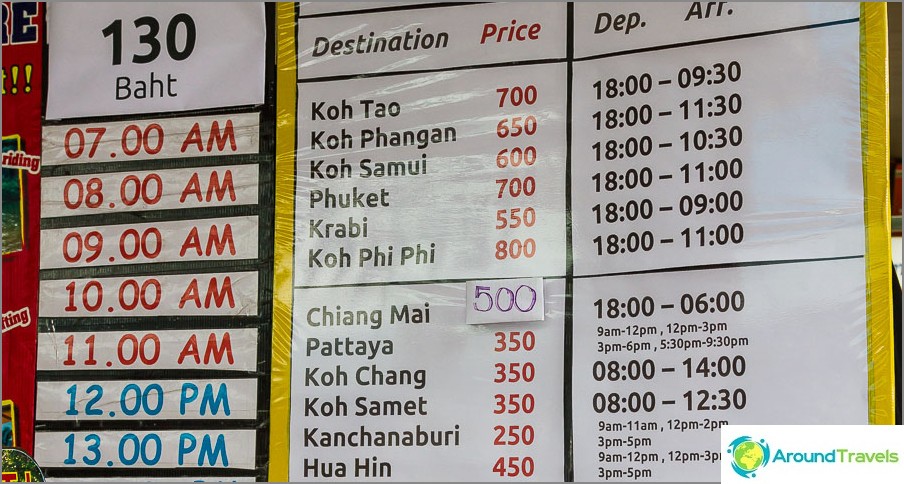 Price for tickets from Khao San

Before Southern Bus Station It’s the most inconvenient to go, because there is no metro and you need to get there by bus, so I don’t even suggest going there. But if you suddenly need to, then you can get there, in principle, from the airport, first take a free shuttle to the transport terminal of the airport (15 minutes), and from there take bus 556 to the South Bus Station.

If you are coming from Chiang Mai (that is, from the north) or simply from Bangkok, then you come to the Northern Bus Station (near the Mo Chit metro station), from where you can immediately go by minibus to Hua Hin. In order not to get lost, just ask the locals where this minibus stops..

The bus to Hua Hin runs from several places in Bangkok:

The most convenient economy option. 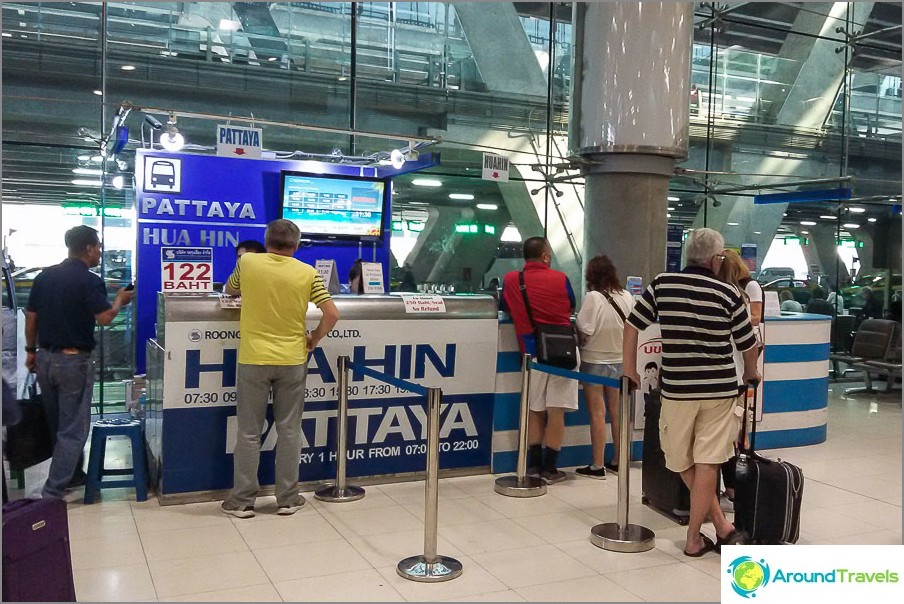 It sells tickets to Pattaya and Hua Hin

Before Southern Bus Station You can go directly from the airport, first take a free shuttle bus to the airport transport terminal (15 minutes), and from there take bus 556 to the Southern Bus Station. Buses to Hua Hin run every hour from 4 am to 10 pm. The ticket price is about 160 baht. Arrive at the Hua Hin bus station in the area of ​​96 soybeans. In principle, no one bothers and leave early, for example, in the very center.

The bus also runs from the Eastern Bus Station, which is much more convenient to get to, just take the metro to BTS Ekkamai station. And there will be a bus station right next to the exit from the metro. The cost is about 180 baht.

You can also leave from the Northern Bus Station by bus, but they run less often than minibuses from there. But a very good bus company Sombat Tour runs, they have English on their website and you can see the schedule.

If you live in a hotel in the area Khaosan Road, then go to any travel agency and ask for a transfer to Hua Hin. It can be either a bus or a minibus. Prices are only higher than elsewhere.

Quite an exotic way, because it is long. The train takes about 5 hours and does not run very often. It costs less than a minibus 40-100 baht. Suitable for those who want to travel by train and admire the scenery from the window. The train starts from Hua Lampong Railway Station and comes to the cool wooden Hua Hin train station in the city center.

Transfer via the Internet

Those who want a minimum of body movements can order a transfer online at Kiwitaxi or 12go, that is, in advance via the Internet. You will be met in the arrivals hall, picked up your luggage, put you in the car and taken to the right place. The method is good because there are no problems at all, while it costs like a regular taxi.

I have already traveled on a transfer from this company and was completely satisfied with it. We were met with a sign, put in the car and taken to the hotel. Here my review about Kiwitaxi.

Taxi Bangkok - Hua Hin cost somewhere around 2000-3000 baht, depending on your bargaining ability. You can take a taxi from both the airport and the hotel. However, you can leave straight from the street. It travels almost as long as a minibus in time, only more comfort. Negotiate the price in advance.

I understand that Hua Hin is only 3 hours away, but nevertheless I will tell you about this option. It can be useful for active travelers who are going to travel around the area, or Hua Hin is their intermediate destination. It is very convenient, a rented car arrives and is already waiting for you. All points related to rent a car in Tae, I already wrote.

The car can be borrowed through Economybookings, this is a broker. He will give on his website offers from all the major distributors in the country. The price can be even lower than directly, plus they can even give full insurance free of charge. I usually take to Hertz, because if you take a car from them for a period of 5 days or more, you can return it elsewhere for free (other companies charge a commission for this). And just on this site it is convenient to compare what will be cheaper, pay this commission, or not pay, since the price per day for all companies is different.

By plane from Bangkok to Hua Hin

Here is the airport website http://www.huahinairport.com/, and at the moment there are no airplanes in Hua Hin. The reason is not known to me, they flew several years ago. But in fact, it doesn't matter, you can always get from Suvarnabhumi in 2-3 hours by taxi, which will be comparable in time and money.

Although there is information that a 12-seater Cessna Grand Caravan flies a couple of times a day. But I think it was canceled too.

How to get from Hua Hin to Bangkok

All of the above methods are valid: minibuses, buses, taxis, and trains. From Hua Hin you can also get to Pattaya by minibus. Here's a map with dots to help you find it easier.. 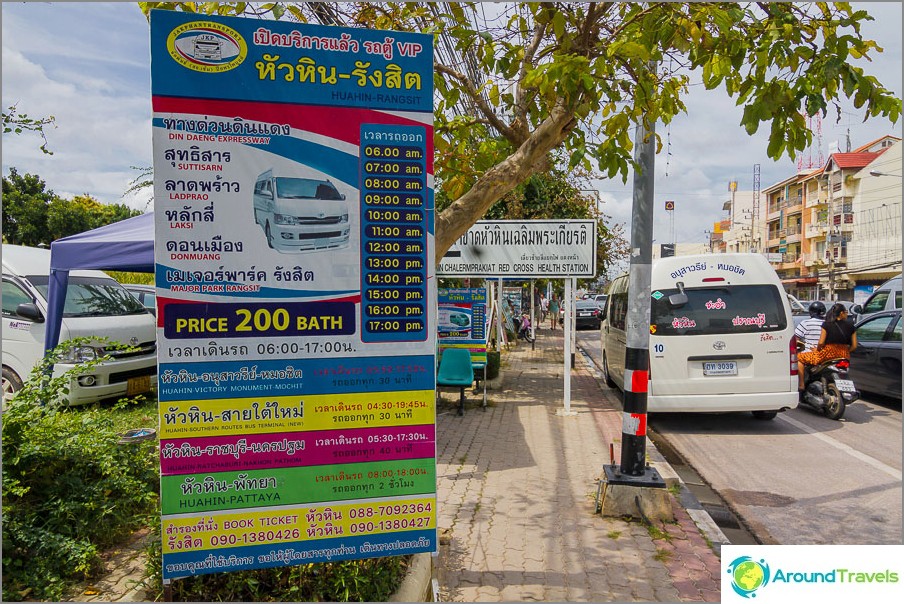 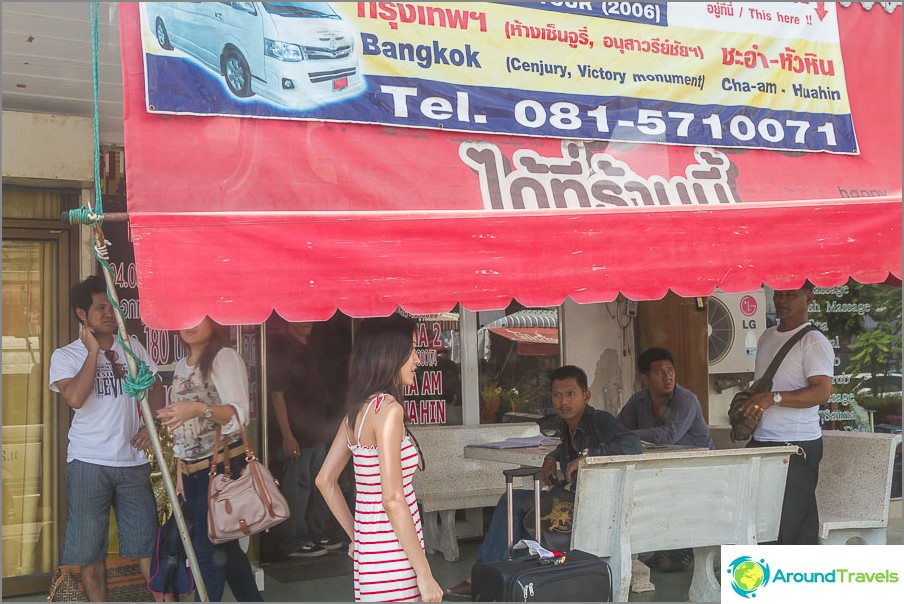