After the article about, how to send a parcel from Thailand to Russia, it is necessary to tell about sending letters, otherwise the information will not be complete. Since I SP, then I sometimes have to send some pieces of paper to Russia (here it is minus entrepreneurship), so this winter in Thailand I had to go to the post office a couple of times to send certificates of service. I tell you what and how.

How to find a post office in your city / island, what types of delivery are, read in my article about parcels. Post office hours in Thailand are approximately the same throughout the country. 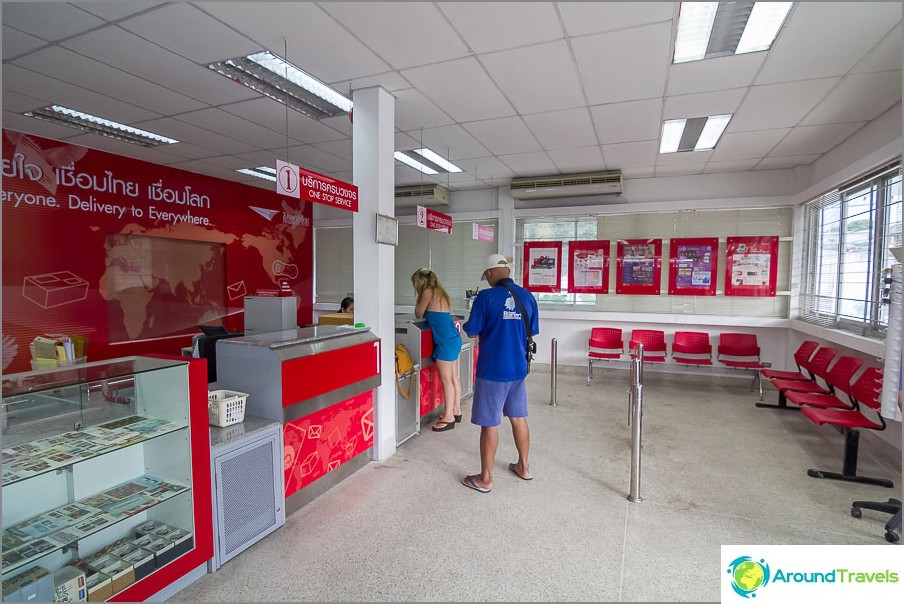 Everything inside is civil and there are chairs for waiting 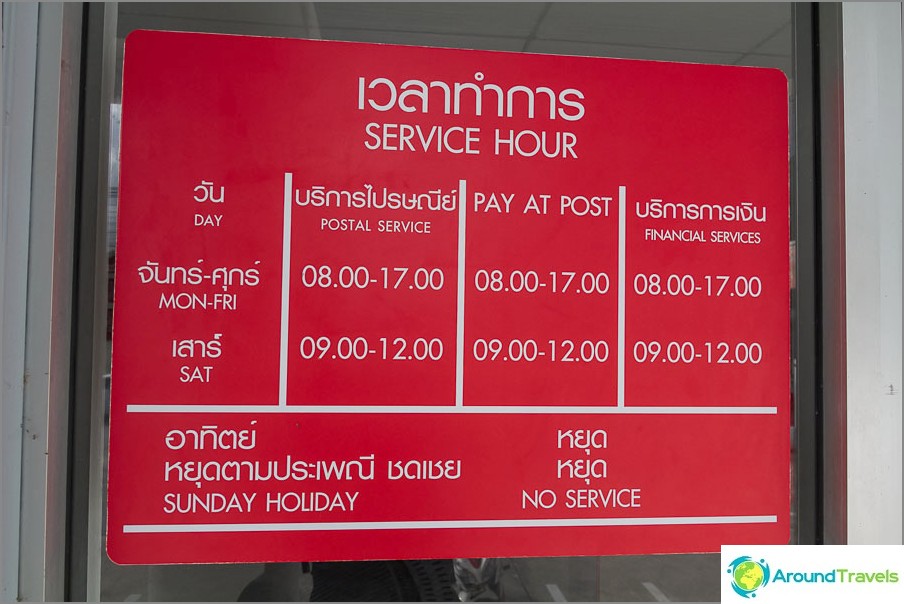 Envelopes are purchased locally. Just come to the post office, look with your eyes for a stall / window where they sell boxes for parcels and envelopes, see what size you need and buy. Since I had to send several sheets of plain paper, I folded them in half and they easily fit into an A5 envelope. But there are definitely A4 envelopes. They cost 5-10 baht, that is, quite a bit.

Filling in the address

Everything here is almost the same as ours. It is only better to indicate the address not only in English, but also in Russian, so that it would be easier for our postmen. Just duplicate everything in Russian in an empty space. Yes, such a moment, the field for the index is intended for 5 characters, and we have 6 characters in Russia, so we just write next to or in these 5 windows, we are not shy, it doesn’t matter. 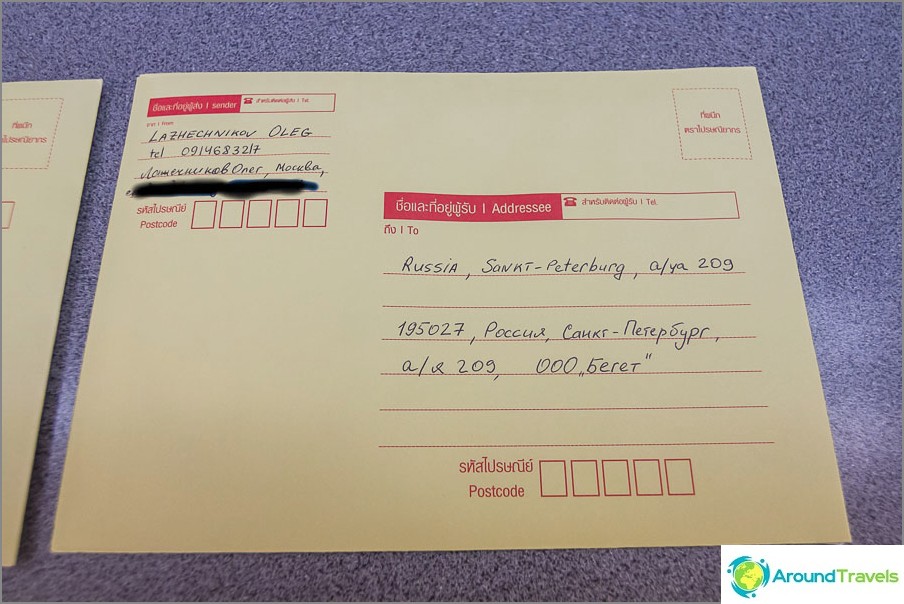 On the envelope we indicate the address in two languages

How much does it cost to send a letter

The cost of a letter depends on its weight, so it will be weighed before being sent. The price can be found on the official website of the Thai Post here on this page. You will need to select the country of destination and indicate the weight in grams. As a result, for small weights, you will get a whole list of options to choose from, do not be alarmed. If you are sending a letter one time, then just choose Int for yourself’l Letter-Air, that is, regular air mail. 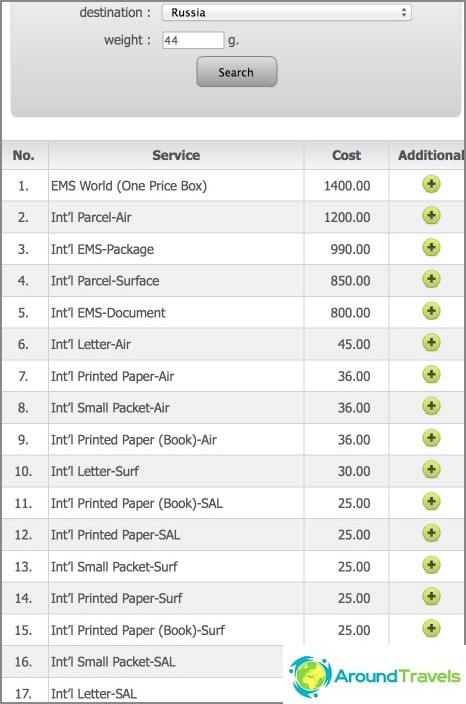 The cost of sending a letter to Russia

I got 44 grams for 4 A4 sheets, which cost 45 baht when sending Int’l Letter-Air, that is, by plane. But that's not all, there was another incomprehensible amount of 65 baht in the check. Only later, I realized that tracking with a tracking number, which was also written on the check, costs so much. Another time I said no tracking, and the letter came out cheaper, just without these 65 baht.

The most interesting thing is that no one even asked me how I want to send, whether I need tracking, so it makes sense to figure it out before you go to the mail. Although, if you are lucky, and they speak English at a normal level, they will tell you everything themselves. So far I have concluded for myself that they will send without tracking, otherwise 100 baht per letter is somehow expensive, and still I don't track anything.

If you still want to save money (for example, when you send dozens of letters), then you can choose not air mail, but ground (Int’l Letter-Surf), it will be cheaper, but it will take longer.

As I wrote above, there is tracking for emails. If you really need it, then just in case, tell you to do it too, although they seem to send letters this way by default.

To find out your tracking number, you need to find a set of numbers and letters on a postal check, such as RR067879484TH, and then enter it on the website. 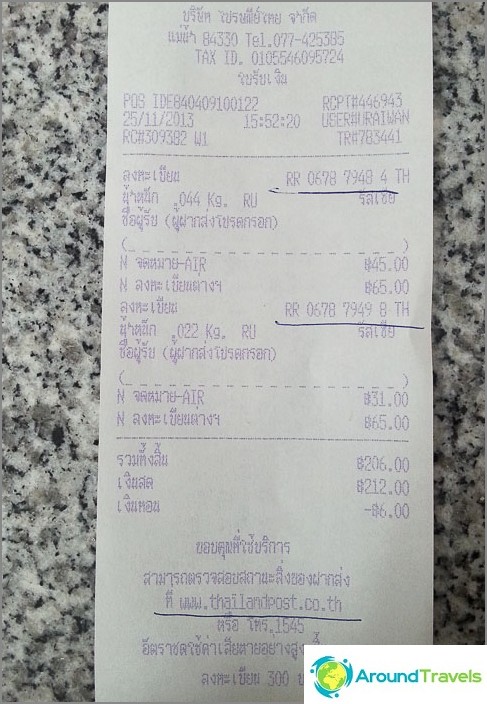 Check with cost and tracking number

Way of writing with dates on a Thai website 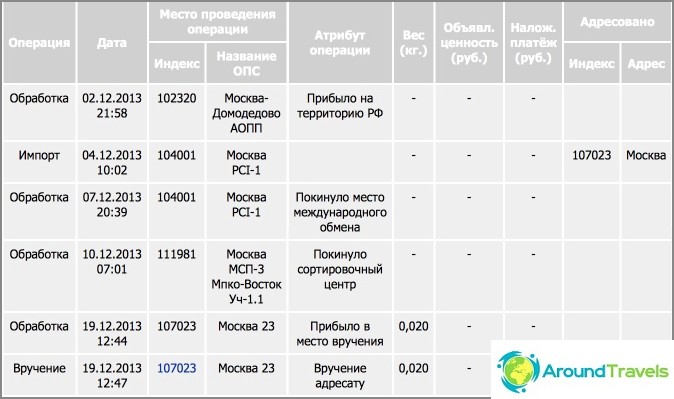 Path of letters with dates on a Russian website

As you can see from the screenshots, my letter arrived in a total of 25 days. Of these, 3 days were spent on the way to Bangkok (this must be borne in mind that all shipments go through it), from Bangkok to Moscow it took 5 days, and most of the time spent in Moscow - from the sorting center to the addressee for as long as 9 days. I don’t know what it’s connected with, maybe with the upcoming New Year holidays. Since I have already sent other letters without tracking, I cannot say if they arrived faster. However, I think they usually get it faster, judging by the fact that our parcel arrived in 18 days (not by air mail).