Vkontakte to my article about that, how to feed a child in Thailand a discussion broke out on the topic of GMOs in baby food in Thailand and that they should not categorically feed a child. Therefore, I decided to take this information out in a separate article..

The man argued that children's Thai purees are entirely GMO, and they say, this information is even in official sources. True, he refused to name the sources, but it’s a pity it would be interesting to read all this, because it’s quite difficult to google useful information right away. And for a long time I have not believed anyone at their word, there is more misinformation and stuffing on the Internet than real information. What I found and learned, I described in the article below..

Now we will omit the fact that the harm of GMO and MSG has not been proven, the article is addressed to those who, for one reason or another, avoid these products..

First, about baby food. In total, I found 4 manufacturing firms in the store and sent letters to them.

- Heinz (import) claims on his website that he is making every effort to keep GMOs free. In an official letter, they also replied that they do not use it, although they are aware that some organizations say about them that they have it..
- BuddyFruit (import) answered me with an official letter that it does not use GMOs, and they say they are super natural.
- Organis Earth’Best (import) initially, how organics are positioned, and on the site they have a whole section on this topic, so I did not write to them.
- Peachy briefly replied in a letter that they do not use GMOs.

It is clear that they all could have lied, but in official sources this is exactly how it is. By the way, Similak milk mixture and Nestle porridge (available in Russia and Thailand) seem to be officially GMO, but there are always others to choose from. Moreover, you can generally make porridge on your own, cereals are sold. And what I always liked Tai, there is a choice, if you want to get confused on a special meal, you can always find imported organic in almost any city 🙂 While we were living in the BPC, we bought organic zucchini Egor in the Villa Market supermarket and something else. 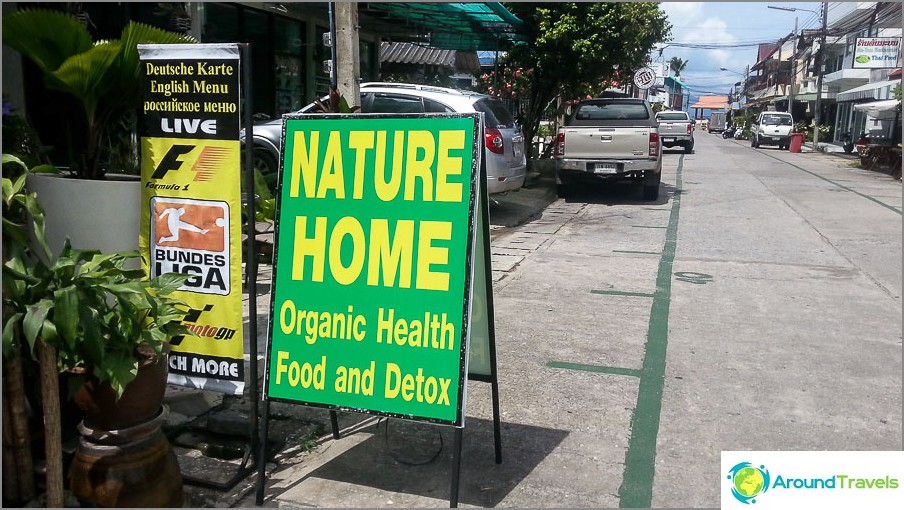 It is also mentioned on the Internet that GMO Thai chips Lays and Pringles, Knorr and Nissin soups. But okay, few people eat this garbage, it's sadder that rice can be GMO and Thai fruits. In particular, my favorite papaya, infa was on the Greenpeace website in 2004, if you believe him, of course. Maybe since then, these plantations have already disappeared, not in the know. True, given that in Russia vegetables and fruits in supermarkets and markets are also GMOs, all or in part, you should not get too upset.

In addition to Ty's excuse, I can say that our friends measure all vegetables / fruits with a nitrate tester for the content of nitrates in them, and here everything is almost always normal. While in Moscow the excess was 3-5 times the minimum! I remember when they came to visit us and tried them on, then everything could be thrown away, and it was not only products from the supermarket, but also from the farmers' market. All this, of course, has nothing to do with GMOs, but here it is certainly clear to everyone that exceeding the norms is not good.

The topic is actually very broad, almost everything (fruits, vegetables, cereals, etc.) can be genetically modified, including fertilizers and animal feed. Some related links:
Tai has banned the import of genetically modified cereals
Taiwiz thread about GMO with links
Articles on Thailand on the Greenpeace website

If you prefer food without monosodium glutamate, then look for a cafe NO MSG, there are not so many of them, but they are found. In Chiang Mai, I remember, in general there were a lot of them. You can also go to vegetarian cafes, as a rule, they monitor this and do not add glutamate..

In an ordinary cafe, when ordering food, you can ask not to add glutamate - «Mai sai phong churot». You can still talk «know ajinomoto» and «know rotdi», so brands of seasoning powder are called, which are shoved everywhere. Just keep in mind, Thais may not understand you, forget about the request, score on it, etc.. 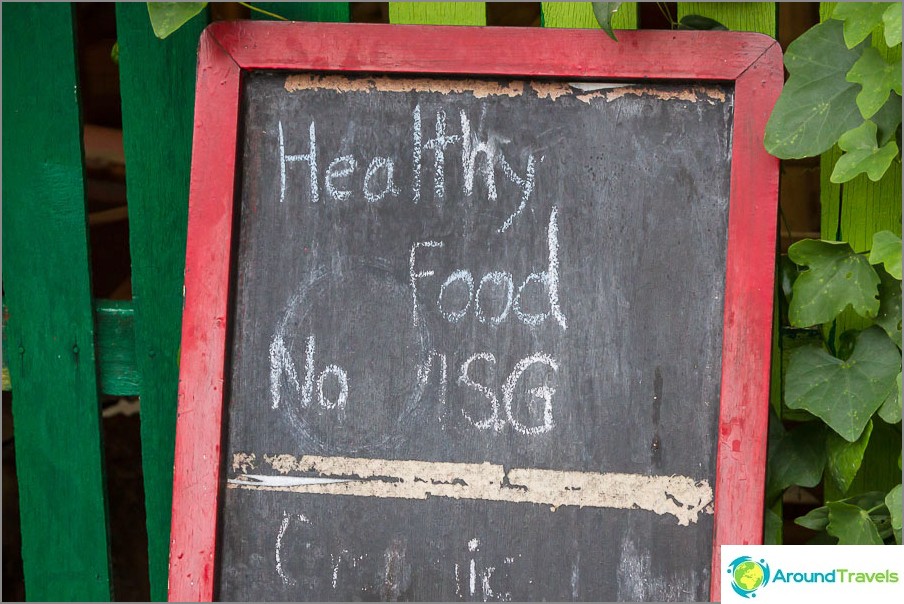 Shit in front of the entrance to cafe No MSG 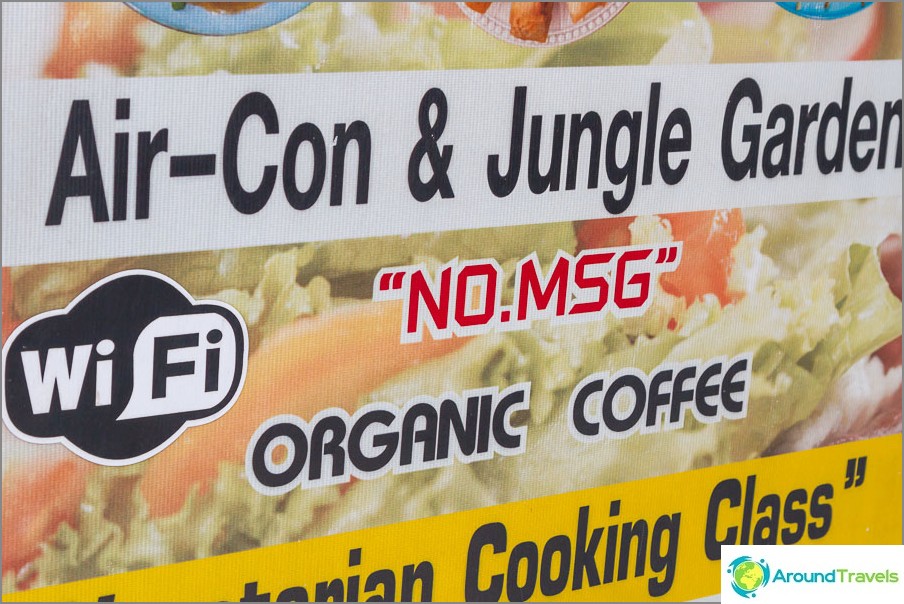 No MSG Café and Cooking Courses

In my experience, MSG is not always added, and, for example, as long as I have not watched Padtai cook on the maker, I have never seen something poured into it. In a cafe, when the kitchen is not visible, you can't really check. But in soups, it seems, they always add. Unfortunately, I have no sense of when the powder is added and when it is not. Long-living in Tae claim that they immediately feel a special taste, and some even have an allergy to it. By the way, MSG is found naturally in some foods, especially fermented ones, and it is officially believed that moderate consumption of glutamate is not harmful.

Also, keep in mind that when buying food under any sauce, you also run the risk of getting glutamate, because it can be contained in the ingredients of the sauce (soy sauce, sukiyaki sauce, fish sauce, etc.). Of course, when buying something in the supermarket, you should also always study etiquette so that Monosodium glutamate is not there.. 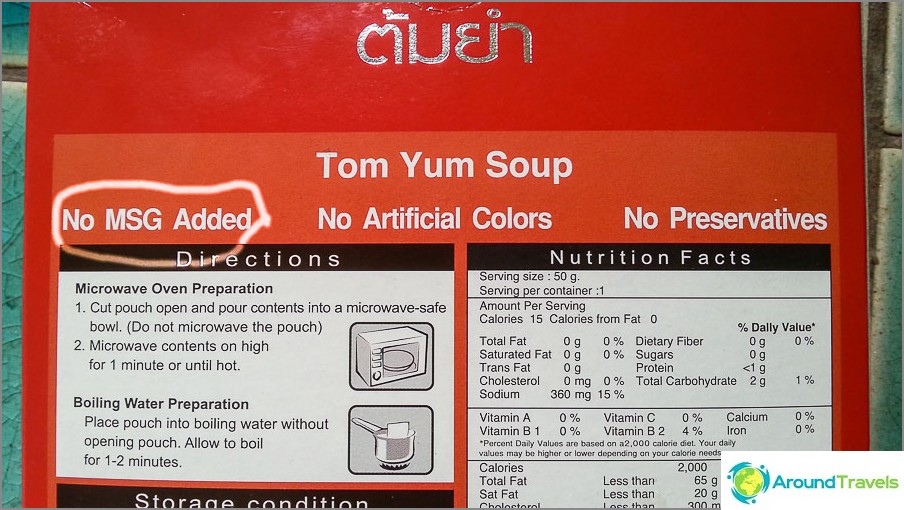 I specifically bought a bag of glutamate to taste it: slightly salty, slightly sweet, slightly sour, full-bodied. Does not cause unpleasant sensations, but also pleasant ones. A certain aftertaste remains. Now I will try to isolate this taste while eating the next Padtay, but I'm afraid it's not real. 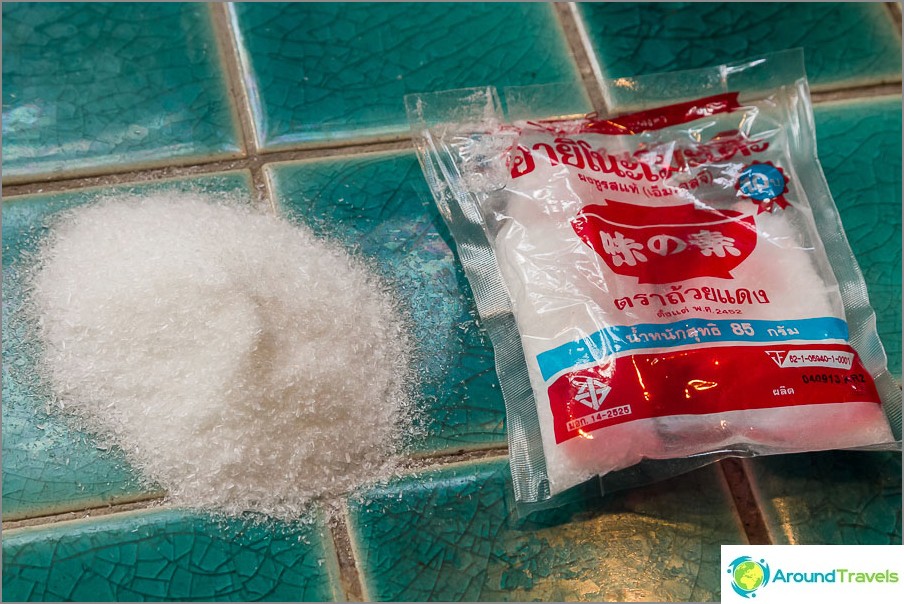 In fact, the best way to be on the safe side is to cook at home and not eat all sorts of different convenience foods, including ready-made sweets, chips, candies, etc. This applies not only to Thailand, but also to Russia. In Moscow, it has already become a habit for us to study the compositions when buying food. We, of course, not fanatically follow this, otherwise you can completely lime yourself, but whenever possible we try to buy something with a better composition (no additives, no dyes, no GMO, no glutamate). In this regard, it is more difficult with GMOs;

P.S. Anyway, I did not take into account everything in this article, if you know something on this topic, please add.