Mount Moses in Egypt - excursion and forgiveness of sins

The firm conviction that it is necessary to climb Mount Moses arose back in Moscow, to dilute the beach vacation with active tracking, so to speak. It is a pity, of course, that without spending the night in a tent, but a place of power, pilgrims here from all over the world come here. Mount Moses is located in Egypt, on the Sinai Peninsula, 130 km from the city Sharm El Sheikh, in which we settled.

According to legend, on Mount Moses, or as it is also called Mount Sinai, Moses received the covenant tablets, and a person who climbed this mountain and met the dawn is forgiven all sins.

For these reasons, we took an excursion to Mount Moses. The price is small - $ 30. You could drive there yourself, but they did not want to fool around. By the way, on the way we checked the visas of Egypt several times, so take your passports.

We arrived at the foot of Mount Moses at 2 am. Just in time to get there by dawn. We were given a multilingual Bedouin as our guide. Crappy, but he spoke 3-4 languages. It's April outside and it was relatively warm, about 15 degrees, a jacket is desirable, and even then closer to the top. So the hotel guide (from Pegasus who) cheated us, scaring us almost with snow.

The height of Mount Moses is 2300m above sea level. You need to go much less, 700 meters in height, and 5 kilometers in length. The ascent takes about 2.5 hours. The last spurt is 800 steps to the very top, where the observation deck and the remains of the Holy Trinity chapel are located. The path as a whole is not difficult, although it may be difficult for those who are very far from physical education, but there are halts where you can relax. The main part of the road is made artificially and is a relatively wide and level path with a slope. It was clearly more difficult for Moses to climb up. In total, the entire excursion to Mount Moses in Egypt takes about a day with the bus, provided that you were traveling from Sharm.

If on the way you will be offered «Camel», then you should know - this is Camel, that is, a camel, I did not immediately catch up with it. In a conversation with our guide, we learned that the camel is actually not a camel, but a dromedar (otherwise a one-humped camel), which is all smarter and more adaptable, and indeed a super duper animal. It's just that no one knows about them, so they just call them camals. Literally for $ 15-20, or as you bargain, you can take one hump to the steps, and there it is already a little bit to the top of Mount Moses and sinlessness. It is only interesting how the heavenly chancellery will regard such a feat. Still, you have to do something to get something.

The entire climb to Mount Moses in Egypt takes place in the dark, you cannot see a single zgi, you can admire the mountain views only on the way back. But throughout the entire journey you can «enjoy» natural aromas exuded by dromedary camels. At the top of Mount Moses, a crowd of people gathers in anticipation of dawn. It is difficult for everyone to fit, so you have to climb almost to the chapel. The wind is terrible here, it's good that winter jackets from Moscow are with you. 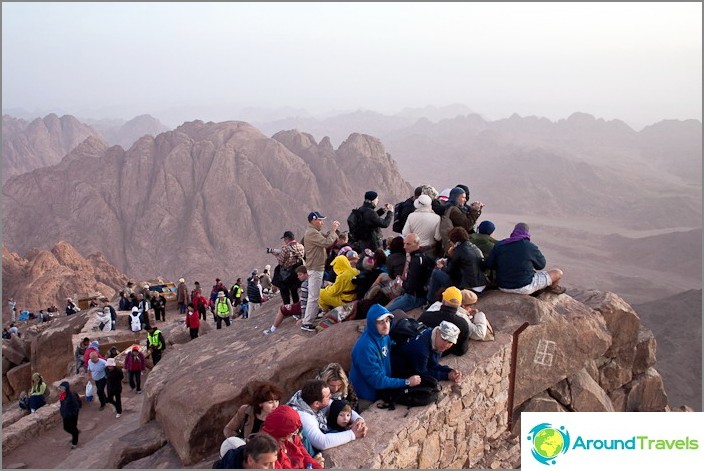 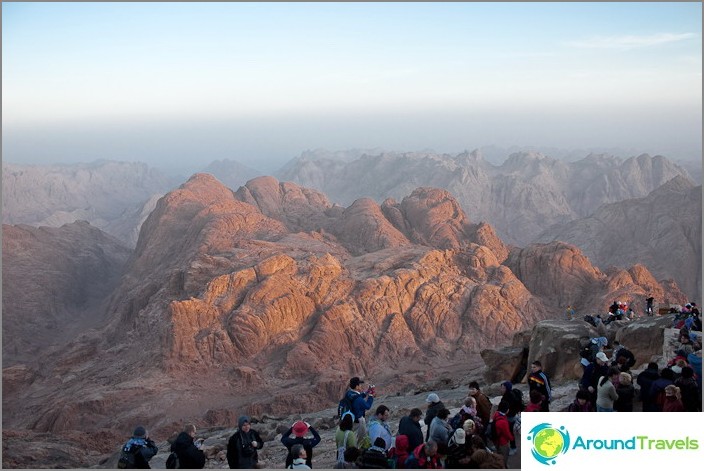 On the mountain of Moses. Before dawn.

After a while, the solar disk appears, and the crowd, hypothetically sinless, and having taken a million photographs of the next sunrise, smoothly begins to flow down. Some continue to pray, and a group of Chinese people nearby are chanting under the guidance of their authority. Below, people in white robes perform ritual acts. Fun. The Chinese, by the way, sang beautifully, melodic. 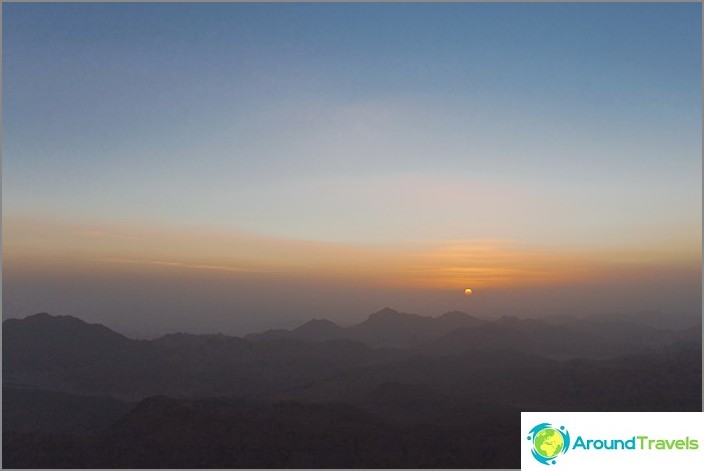 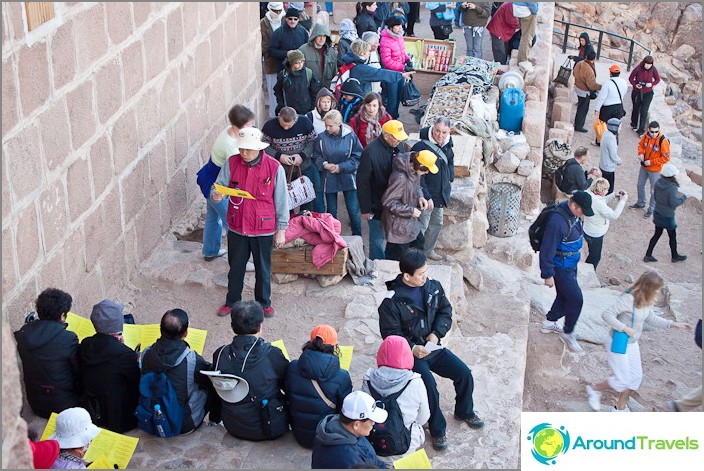 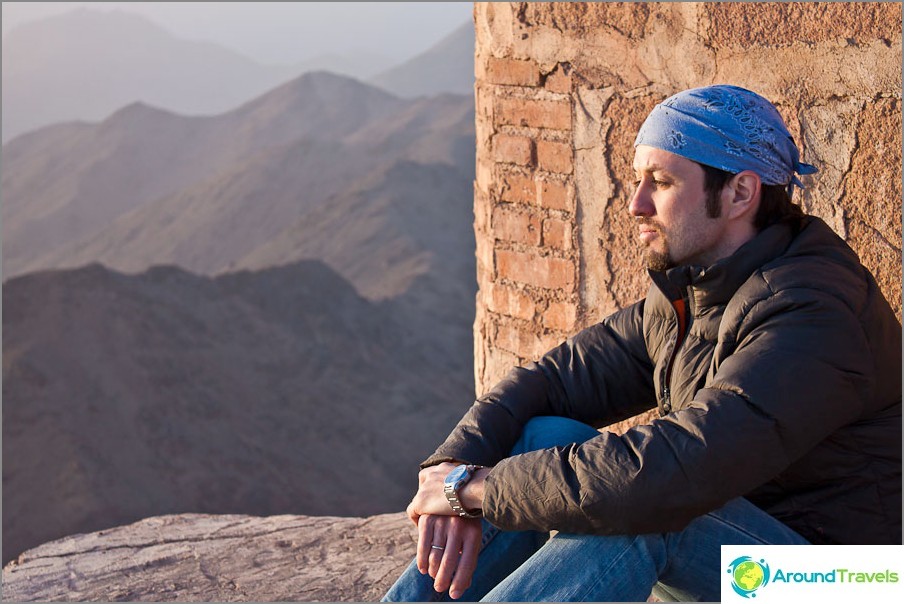 We meet the dawn on Mount Moses after a night rise

The descent from Mount Moses was easy. Descending is easier, however. I just wanted to sleep terribly, because in total for a day already on my feet (including the time before the excursion, they did not go to sleep specifically in front of it). 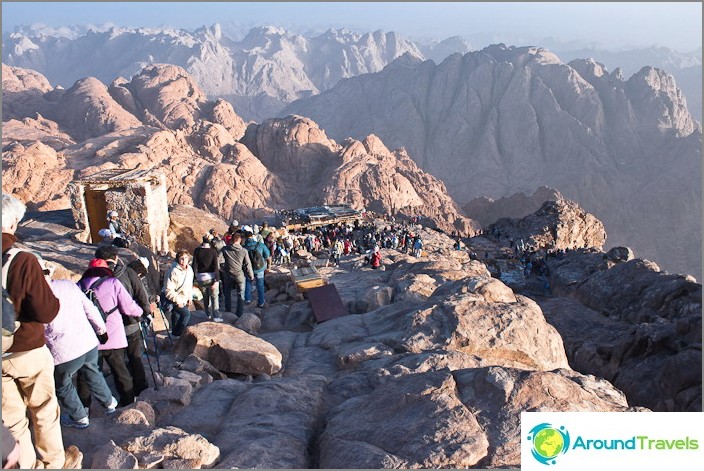 The mountains are impressive with their lifelessness, no vegetation at all: stones and sand, sand and stones. I remember I'm in Altai mountains crushed by a small number of trees, so in comparison with the Sinai mountains, Altai is just a jungle. 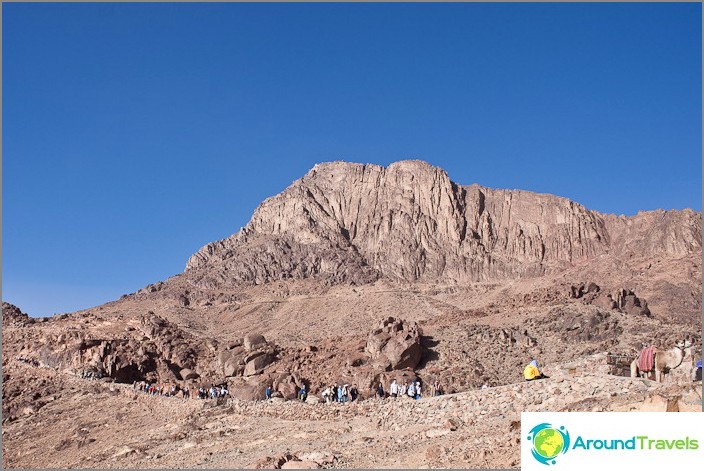 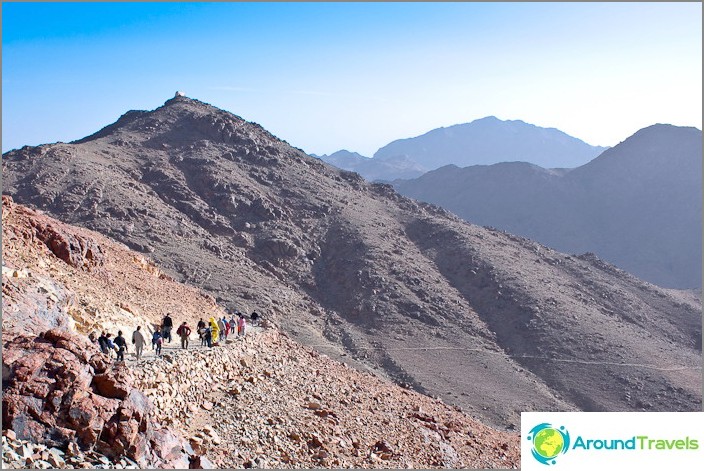 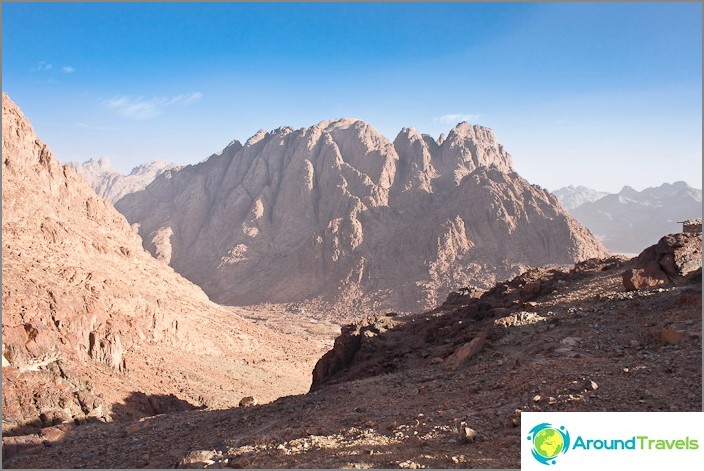 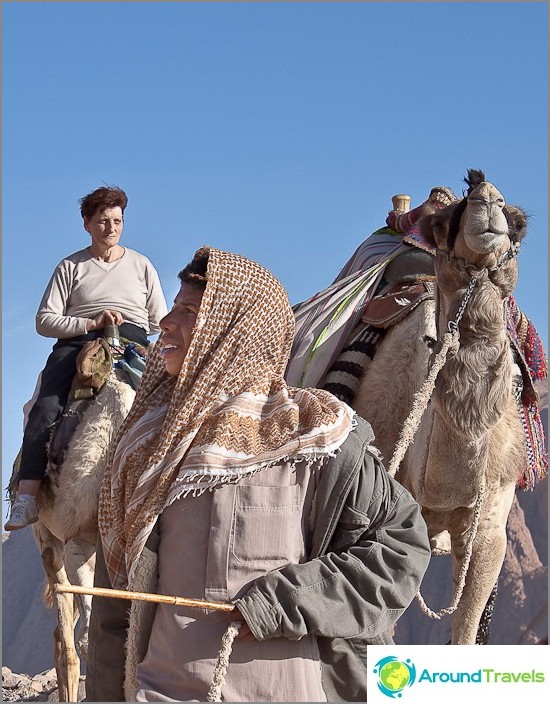 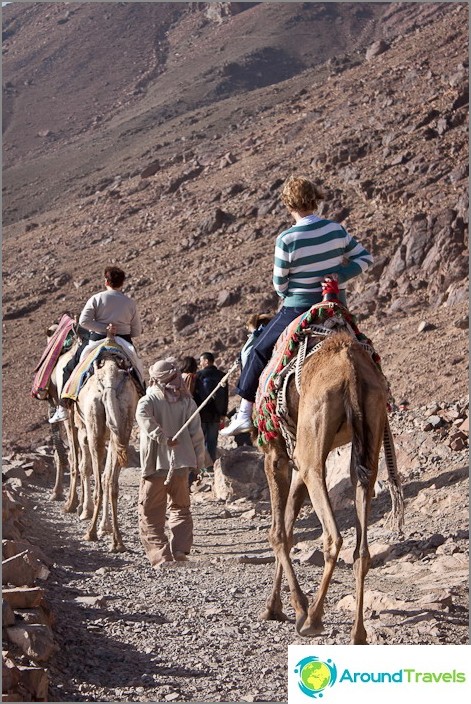 Monastery of St. Catherine and the Burning Bush

The program also included a visit to the monastery of St. Catherine. This is a special place, several religions peacefully combine here, there is also a Russian church and a mosque. You can put candles, look at the warehouse of the shards of the monks, see the well dug by Moses, and modernized by Napoleon. 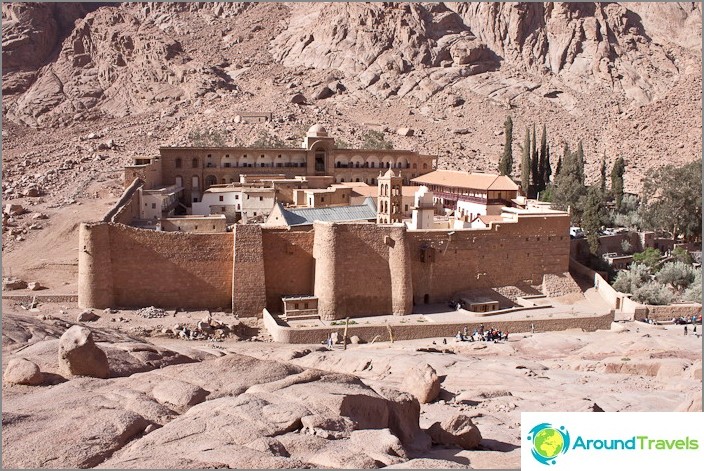 Inside the monastery there is a well-known and slightly peeled bush of the burning bush, which is several thousand years old. The burning bush is not a burning bush, from the flame of which God turned to Moses. It is also special in that it does not take root anywhere, attempts to transplant it turned out to be unsuccessful. Near the bush of the Burning Bush, you can bury a note with a desire in the wall. It cannot be touched in theory, the guides hiss at careless tourists touching this shrine.. 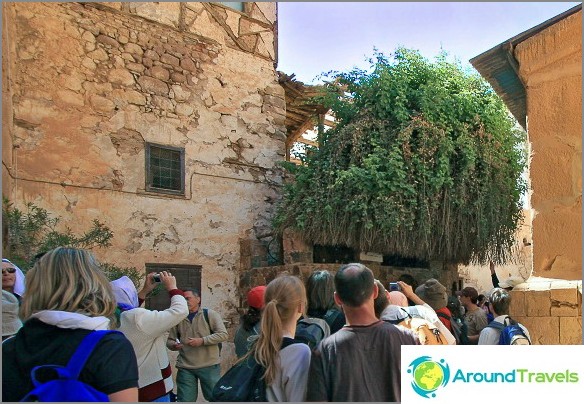 Bush of the Burning Bush. Monastery of St. Catherine.

Satisfied and happy, and even well-fed (breakfast in the restaurant was included in the price of the tour), we drove back to Sharm El Sheikh. The minibus did not seem as comfortable as yesterday, because of the short backs of the seats, it was not realistic to sleep. My sleepy head at every turn strove to leave a dent on the car body or break the glass. Apparently, the universe decided that absolution alone is not enough, and something else needs to be corrected in the head itself.