Pastila Museum in Kolomna - an expensive tea party for children

In Kolomna, I originally came to visit Lazhechnikov Museum and not for tourist purposes at all, I think it's understandable why. But since I was here, I also had to walk through a couple of museums popular with tourists, one of which was the Pastille Museum or the Museum of Disappeared Taste. Oh, how strongly they called!

The impressions are rather mixed, although this museum is full of good reviews and sometimes even enthusiastic. I will try to briefly tell you my feelings. Looking ahead, I will say that I do not really like marshmallow..

Museum of Pastille and Disappeared Flavor

By and large, a museum is not a museum (here I want to put an end to it and not continue the proposal), since there are practically no exhibits in it and there is nothing to look inside. Yes, the house is old, it is a former estate, and inside they tried to create the surroundings of that time, but there are no exhibits. And you pay for the theatrical costume performance on the topic of tea drinking. The cost of the excursion (presentation) is listed below and, frankly, I did not like it, I would divide it by two. On the other hand, the story lasts as much as an hour, and it is not easy for a woman animator in her 19th century costume..

The performance is aimed at children, as a story with elements of involvement. It is with the elements, as it looks rather sluggish. First, in one room they tell you how to make marshmallow, then you go to another room, where you sit down at the table and learn how the merchants drank tea. The narrative is abundantly diluted with quotes from Lazhechnikov «White, black, gray». It somehow happened that I could not remember anything from the first half of the performance, it was too stretched, I almost fell asleep. The second part is more interesting, as they give out a whole cup of tea and 6 scanty pieces of marshmallow. That, in fact, is all. There is not enough pastila (feed the hamster), the actors are tired, but inexperienced children may be interested. 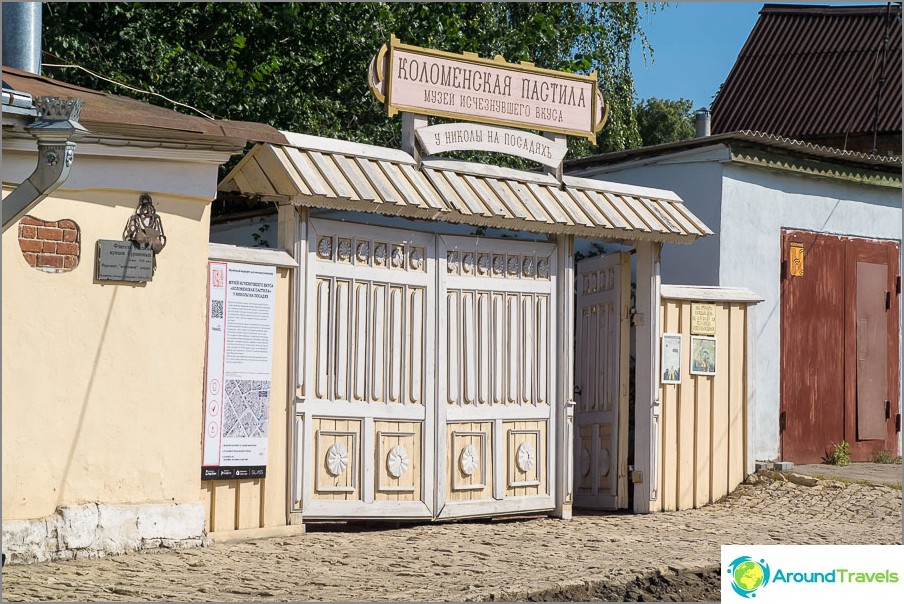 Entrance to the Pastila Museum in Kolomna

Already at the checkout you are greeted by girls in outfits 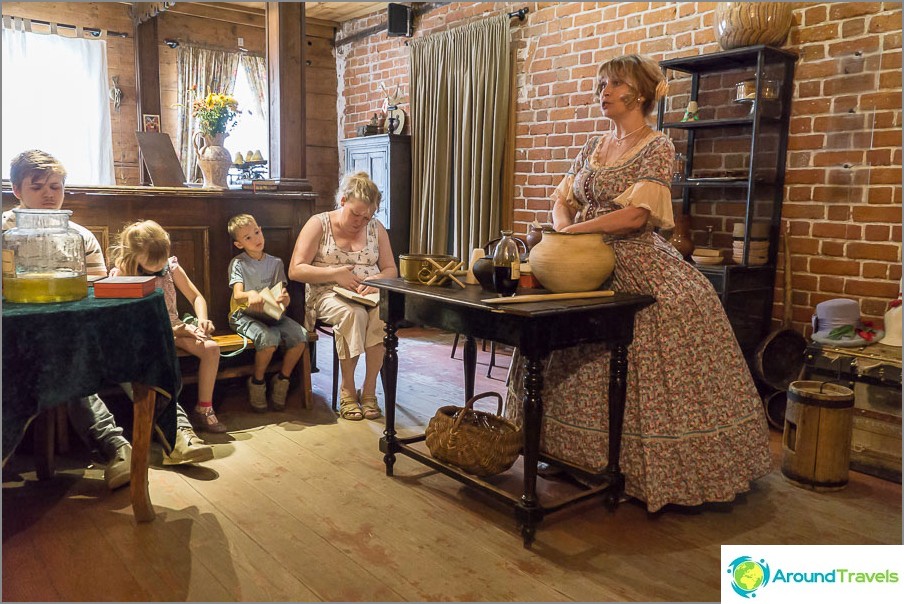 The first room, where they talk about how to make marshmallow 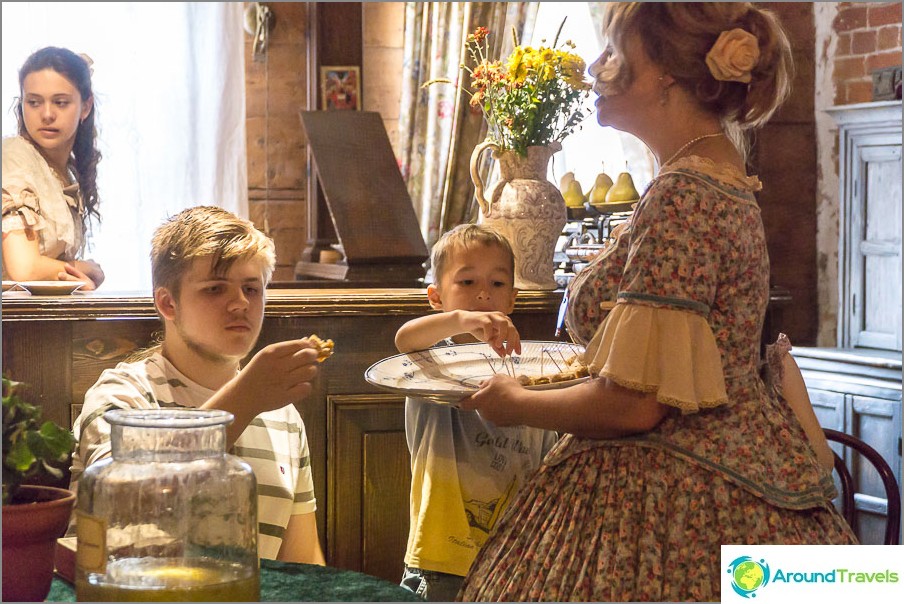 And give a bite to taste

An excellent book, I recommend it to all women to read 🙂 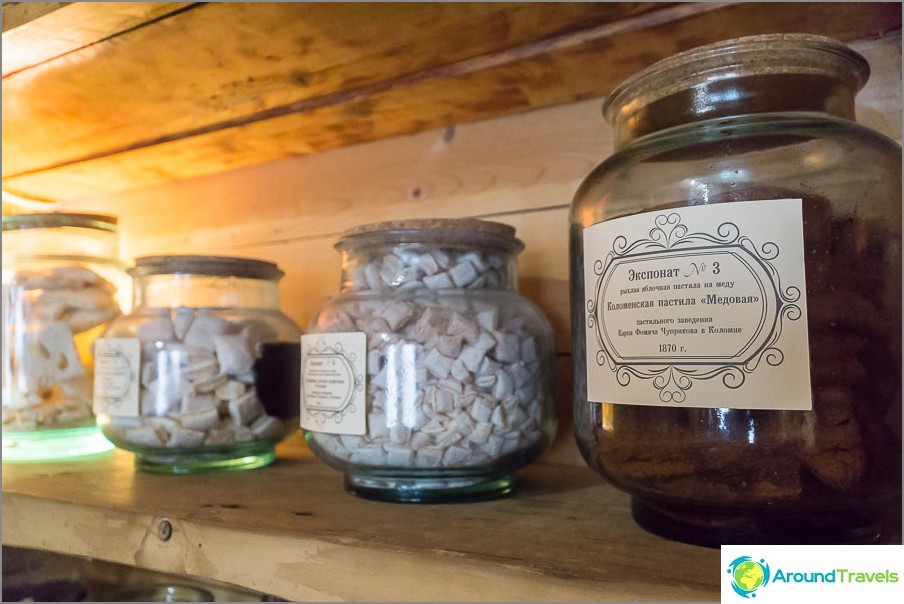 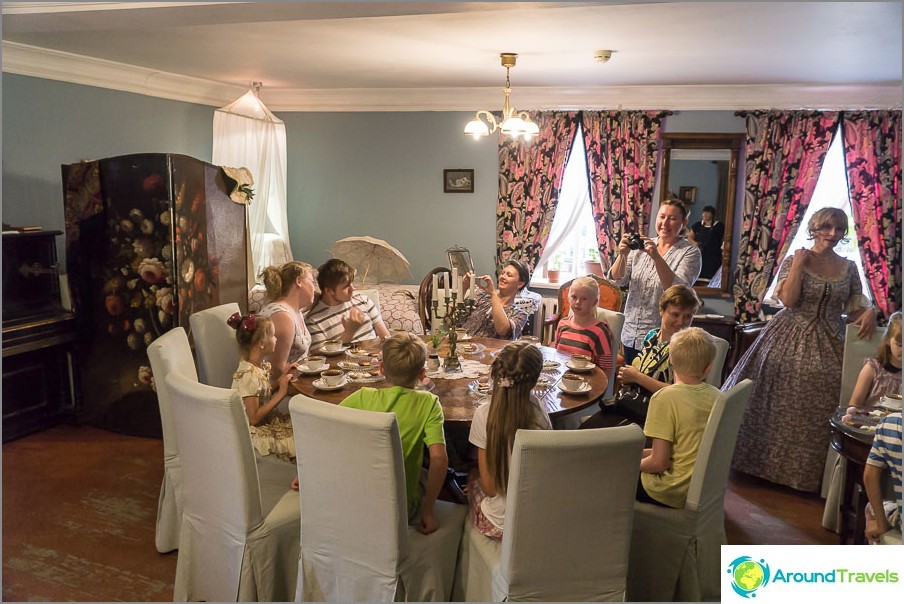 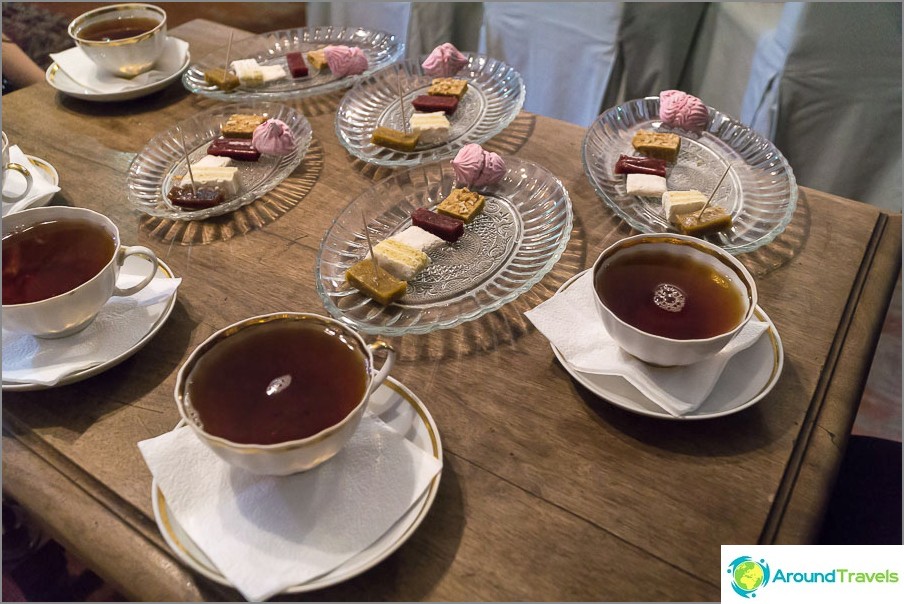 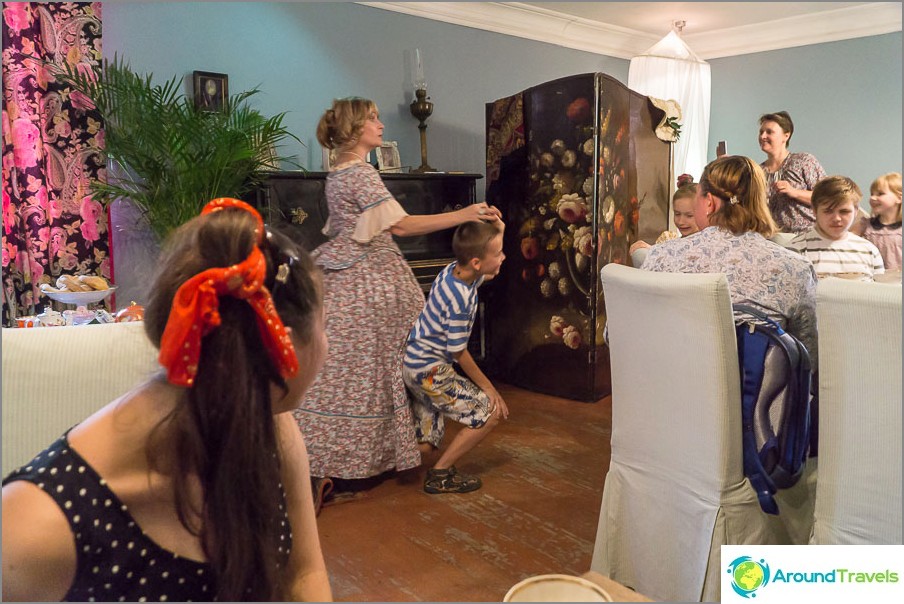 Trying to involve children in the process 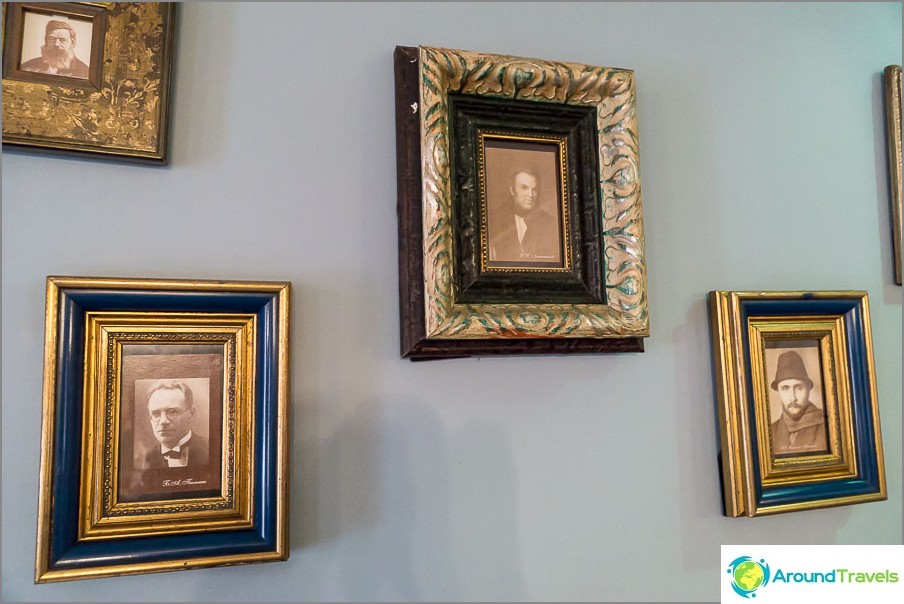 A portrait of I.I. Lazhechnikov hangs on the wall 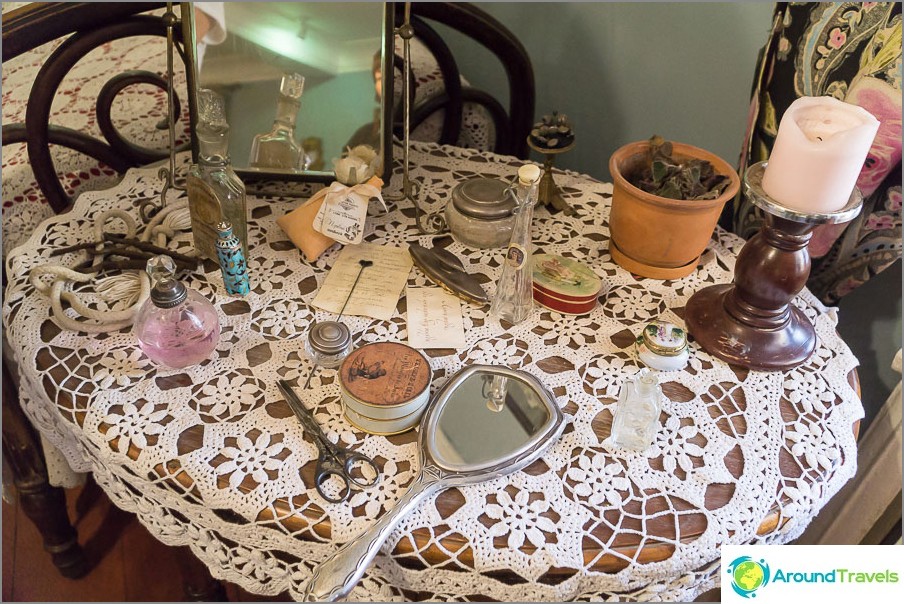 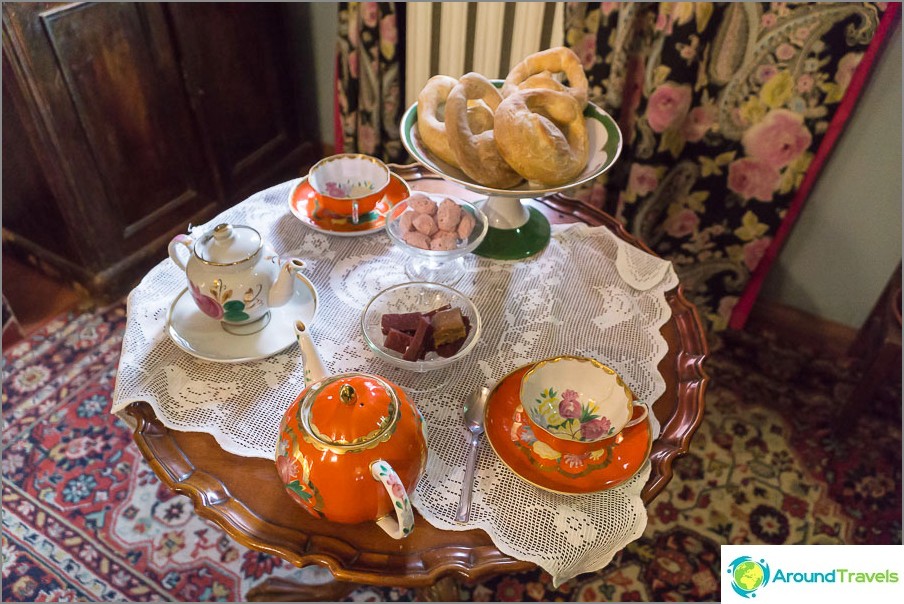 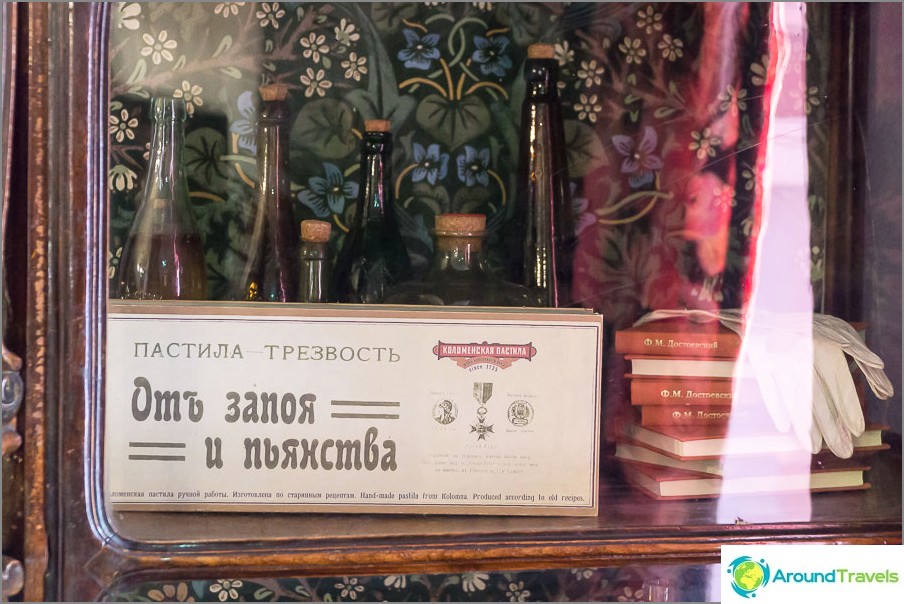 And such marshmallow happens

At the checkout, you can buy a marshmallow as a gift, the one that has disappeared and the taste of which, rummaging through the archives for years, has been restored. It tastes nothing special, it resembles Turkish delight from Ashan, but I am far from a connoisseur, and even less a fan of marshmallows. Maybe it's really very cool, without sugar / preservatives and according to old recipes. A tiny pack costs 250 rubles (100 grams), a larger pack costs 400 rubles.

I liked the cafe at the museum much more. The same entourage, pleasant metal tables with curlicues, wood shavings underfoot ... Romance! It is especially good to drink tea here in the shade, when it is hot outside. Indeed, a pleasant atmosphere, and most importantly for free. More precisely, pay only for what you buy. For example, tea according to Dostoevsky costs 85 rubles (a cup of tea and 3 pieces of marshmallow with a bite). Ice cream ball 60 rubles Quite divine prices, although the marshmallow was squeezed again 🙂 Nevertheless, I recommend it! You can generally just visit a cafe and end there, because the main thing here is to try the marshmallow. 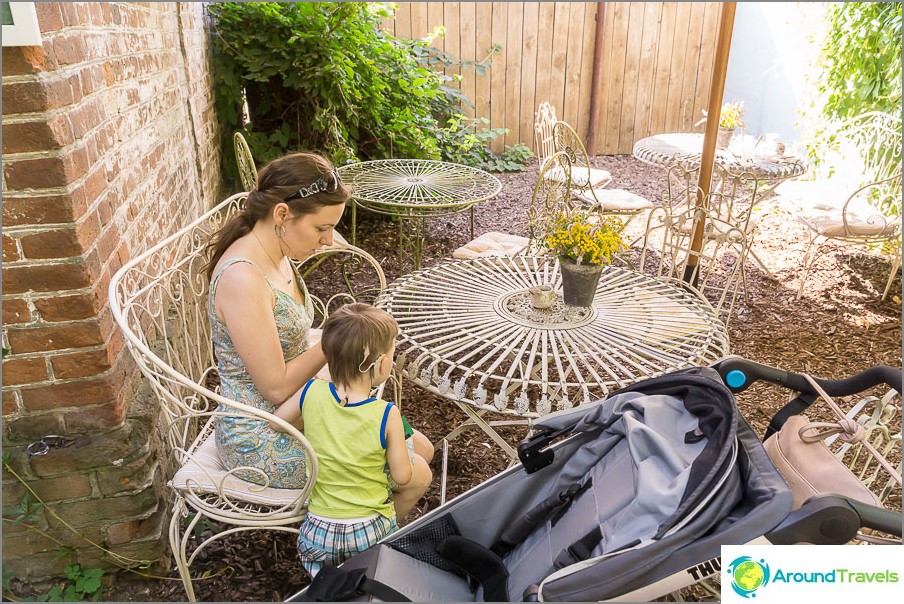 We are waiting for our tea with marshmallow 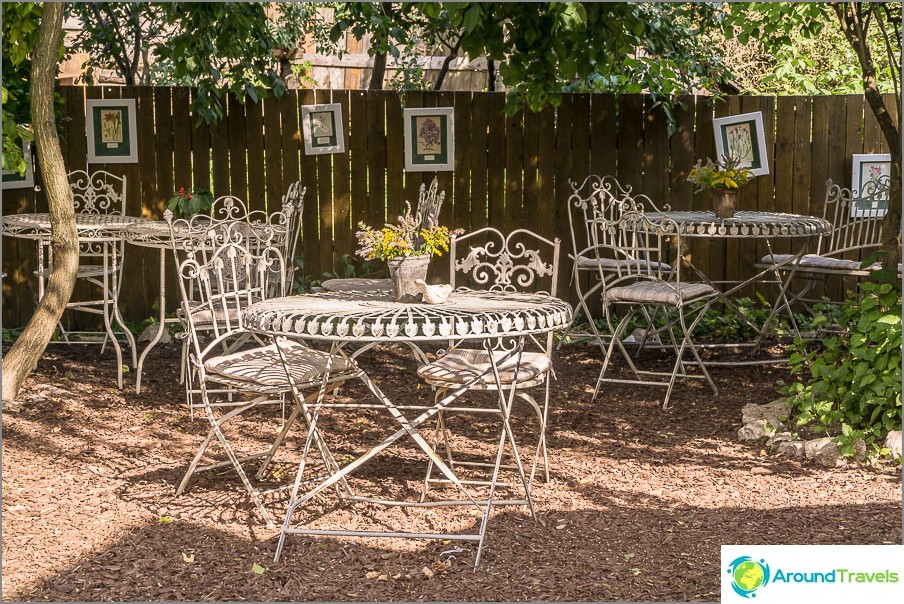 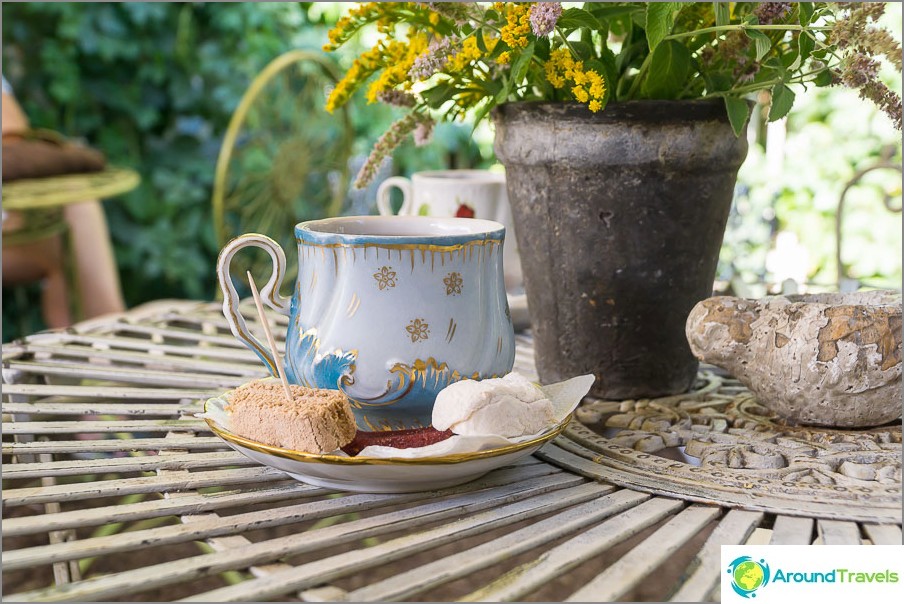 Tea according to Dostoevsky

Opening hours from 10 to 20 without lunch and days off.

The cost of the excursion is 350 rubles per adult, 300 rubles per child. In the season, weekends, holidays, the price is 450 and 400 rubles, respectively.

The tour runs every hour. For photographing during the story they will ask for money, as much as 200 rubles, but in the pauses you can take pictures for free (I did so). It is better to sign up for an excursion in advance, for example, by phone or by arriving directly at the ticket office. I got there at 4 pm and signed up for 7 pm.

Pastille Museum or Museum of Disappeared Taste. A small theatrical performance for children and a tea party.

P.S. I give a standing ovation to business, but as a tourist attraction, especially for an adult, it is doubtful. Better to just go to the museum cafe, sit in the shade in a pleasant surroundings, drink tea with marshmallow. Will be released cheaper, faster and without an appointment.