Nang Thong Beach - the most popular in Khao Lak

Nang Thong is the first most popular beach in Khao Lak resort. Many pensioners rest here, usually walking along the sea and along the main street. I personally liked the beach, or rather the whole piece of the coast, including Bang Niang. And further to the north somehow already less.

Unlike Bang Niang, with which it borders in the north, the Nang Tong area stretches in length along the sea and the highway. And all the infrastructure is concentrated mainly along the highway. The easiest way to get to the coast is along Nang Tong Road, it starts from the highway, where the traffic light is, and leads to the sea.

Large and expensive hotels and resorts stretch along the coast. The strip of sand on the beach is quite wide, in some places it ends with concrete walls of hotel terraces, in other places just a small embankment with palm trees growing on it. The total length of Nang Thong beach is about 3.5 kilometers. In general, Nang Tong is a nice and quiet area, it is clean, a lot of greenery and not very crowded..

The southern part of Nang Thong is sometimes also called Sunset Beach, there are several resorts with a large territory, including the Khaolak Sunset Resort. Perhaps that is why the section of the beach is called that. There are few people and it is beautiful. From Nang Tong along the coast, you can walk along the sea, both to the north (there is a river through which you can either wade or cross by mini-ferry), and south to Sunset Beach.

On the shore and in the water, black boulders stick out from the sand, adding to the picturesque landscape. In general, the entire beach consists of small coves, bends and periodic rocks. The sand on the beach is yellow, fine and coarse in places, with small interspersing of small pebbles and shells.

The shore goes into the sea at an angle, so that the depth increases rapidly during high tide. At low tide, the width of the beach increases to a very impressive one. You can swim, but starting from a distance of ten meters from the shore.

Near the lighthouse on land, a river flows into the sea, but it is better not to swim near it, but to walk 100-200 meters to the right or left.

From them in the morning and in the morning on the beach, a natural shade is formed. During the day, the sun rises high and the shadows from the trees almost disappear, and closer to sunset the sun shines from the sea.

Near the Khaolak Sunset Resort, the beach is limited from the mainland by a stone promontory and a mountain overgrown with vegetation, and there are no trees and natural shade directly on the beach during the day.. 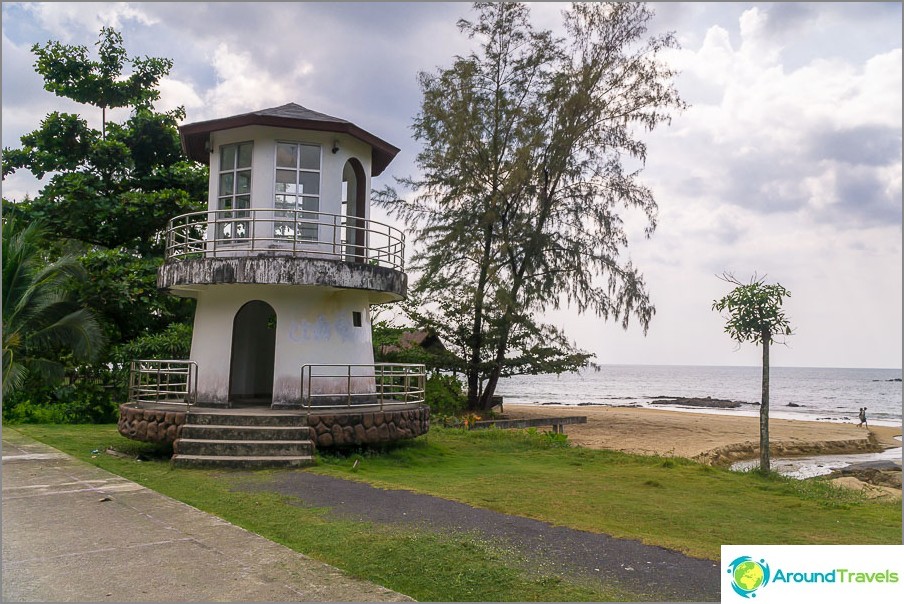 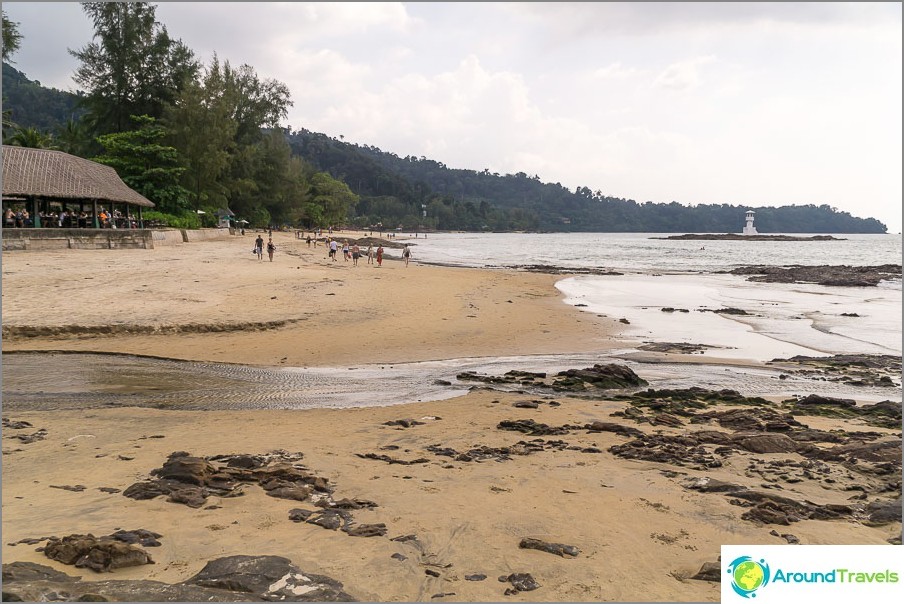 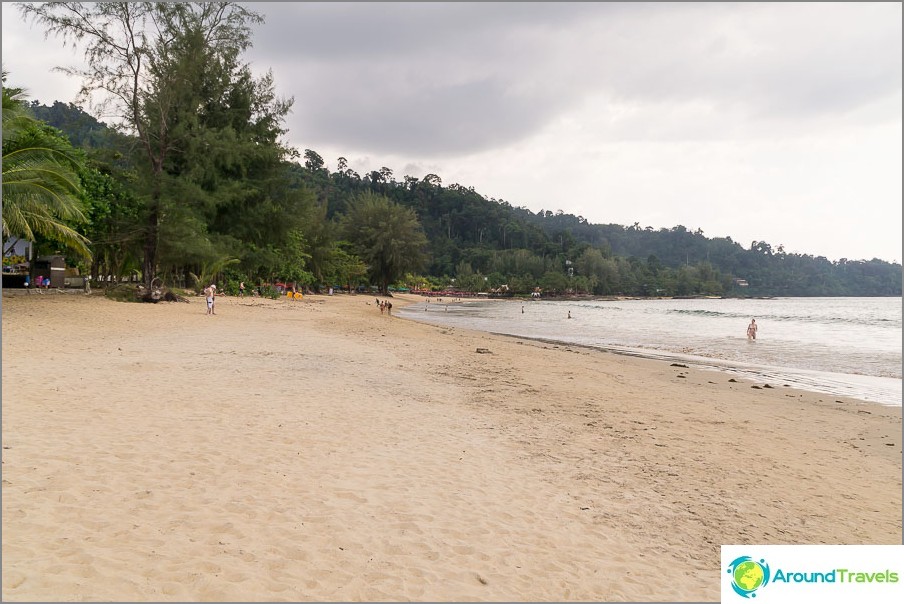 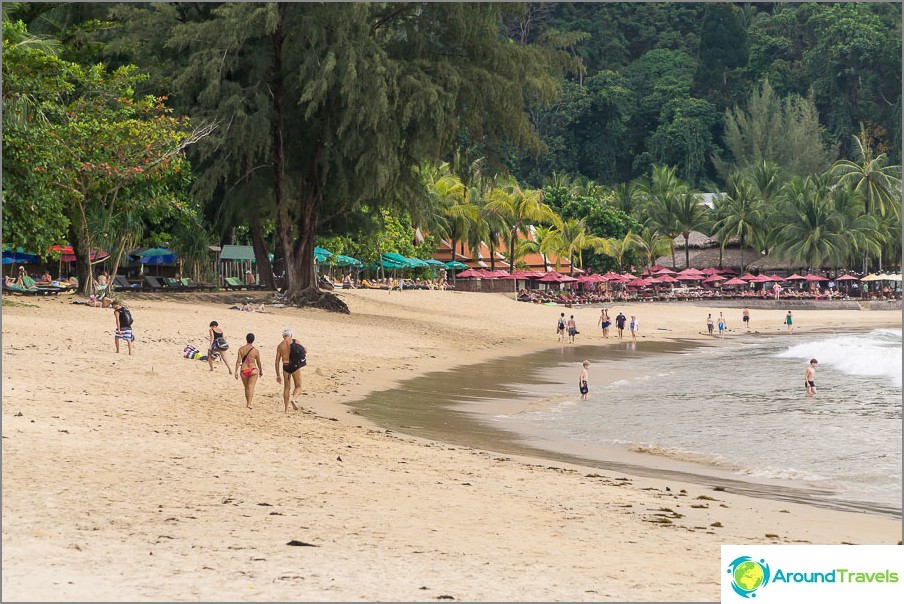 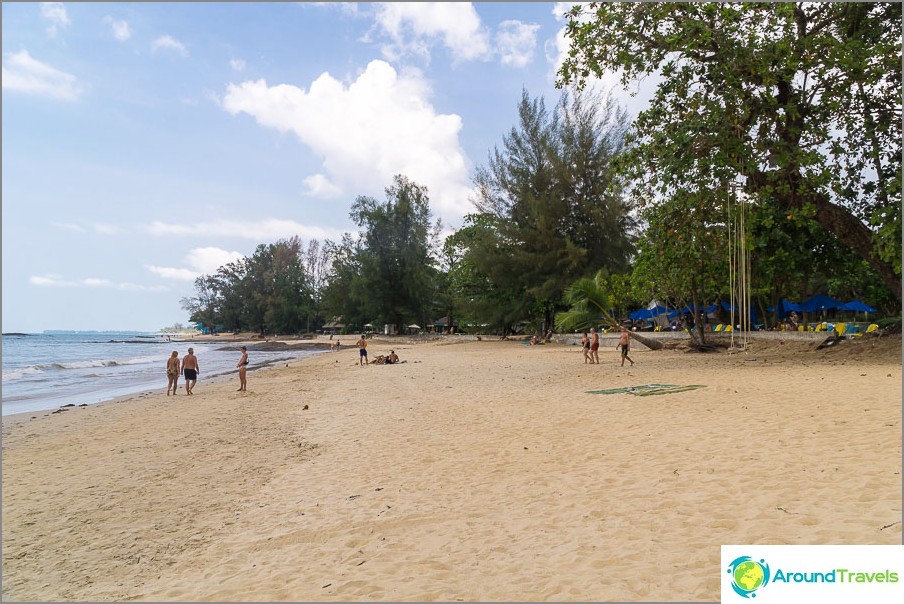 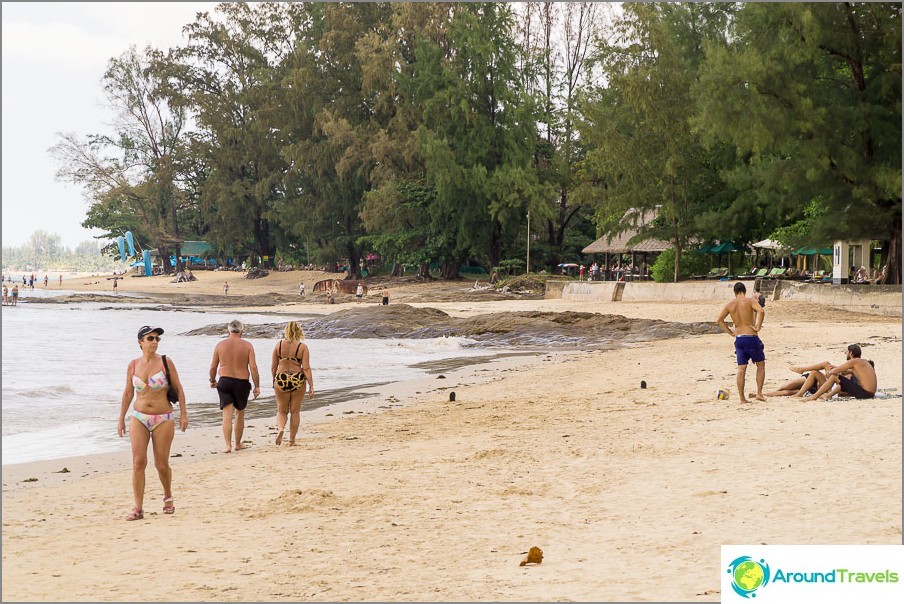 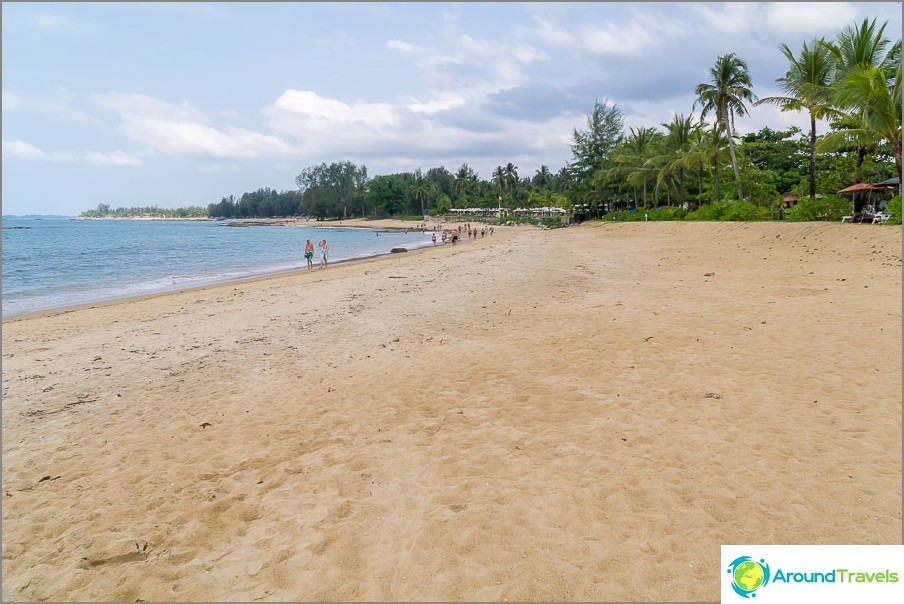 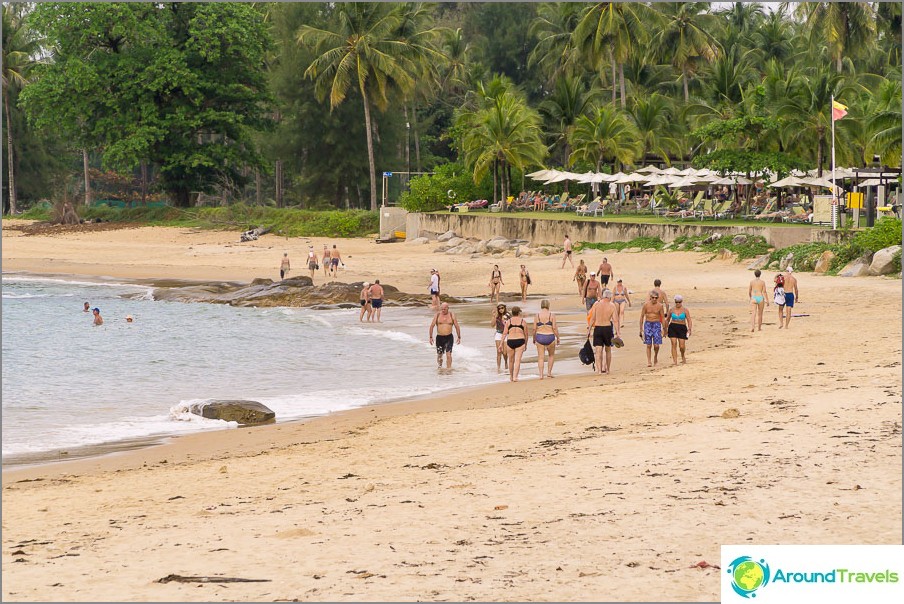 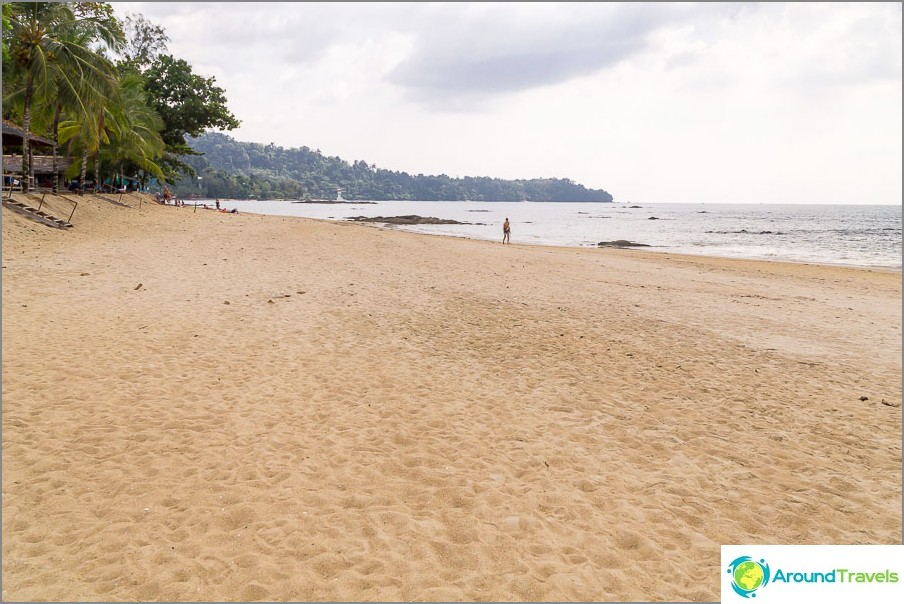 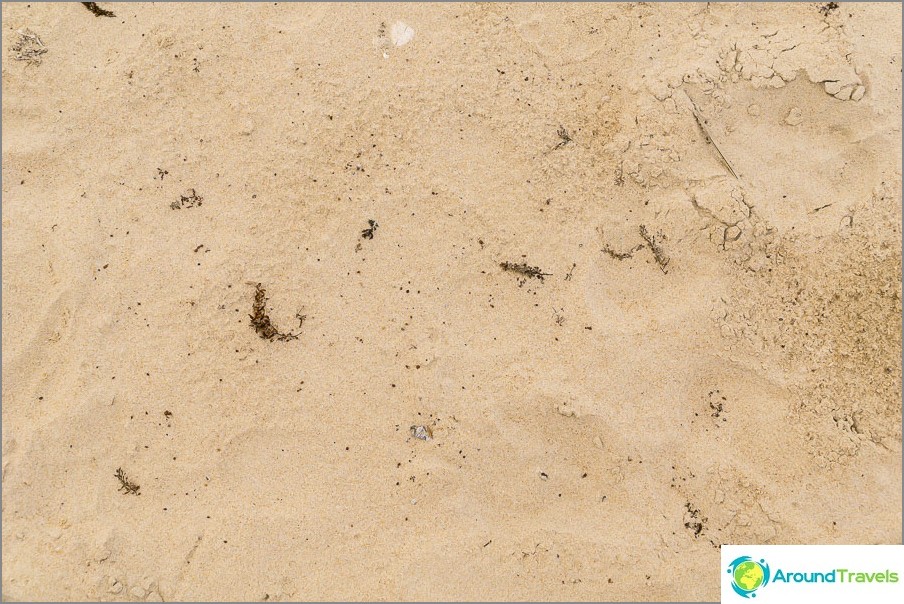 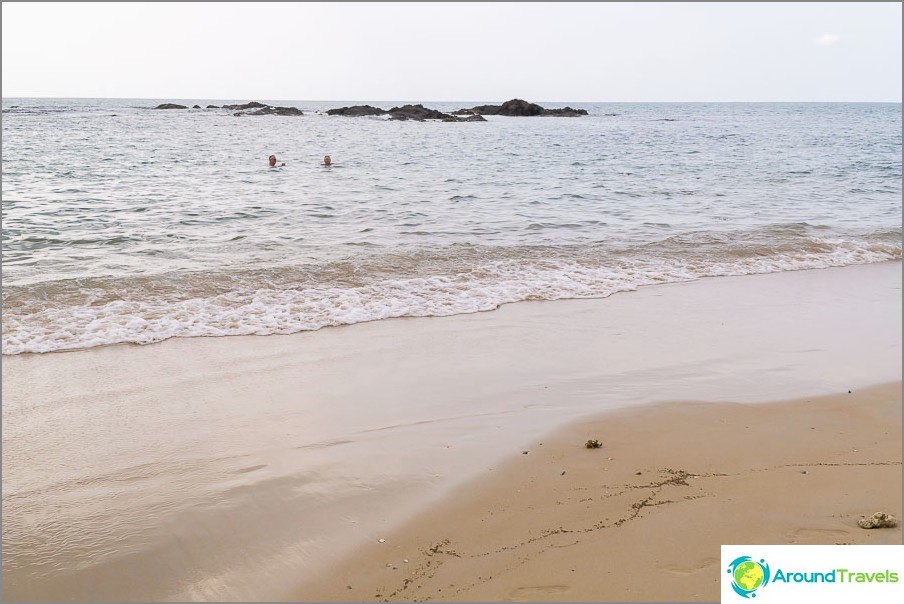 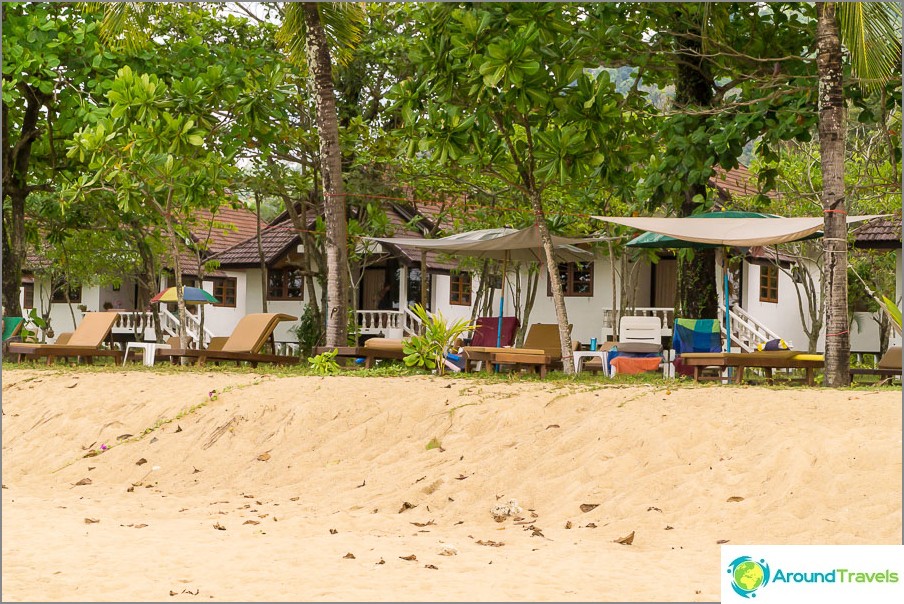 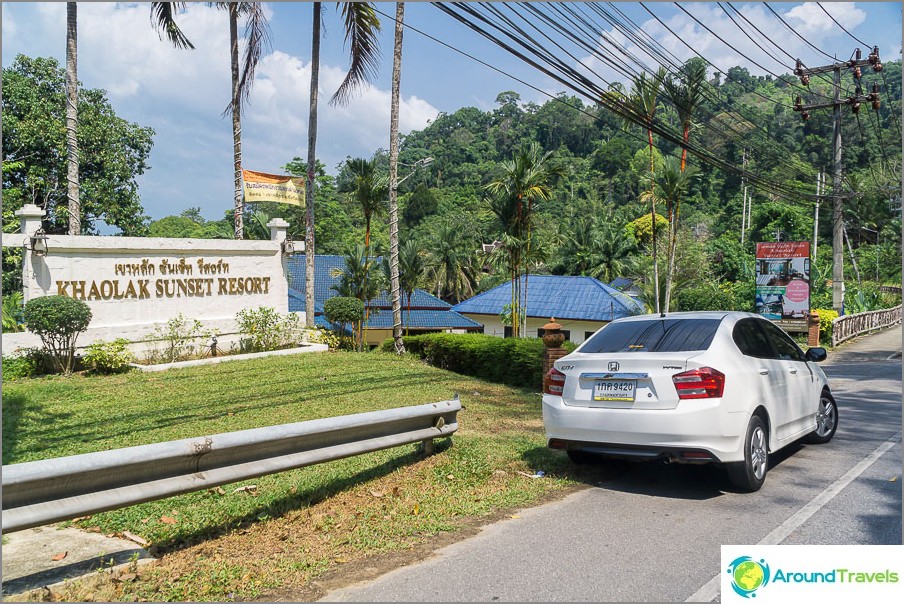 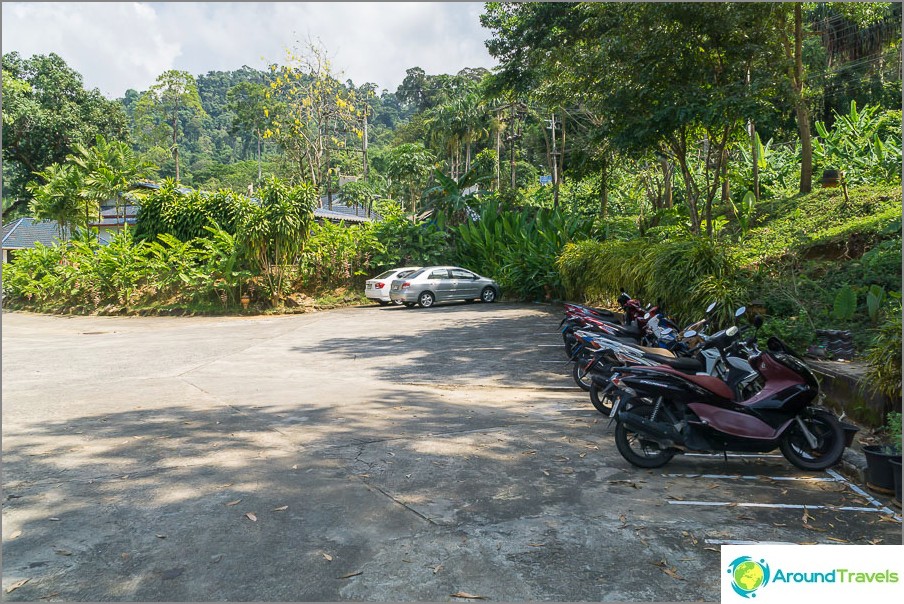 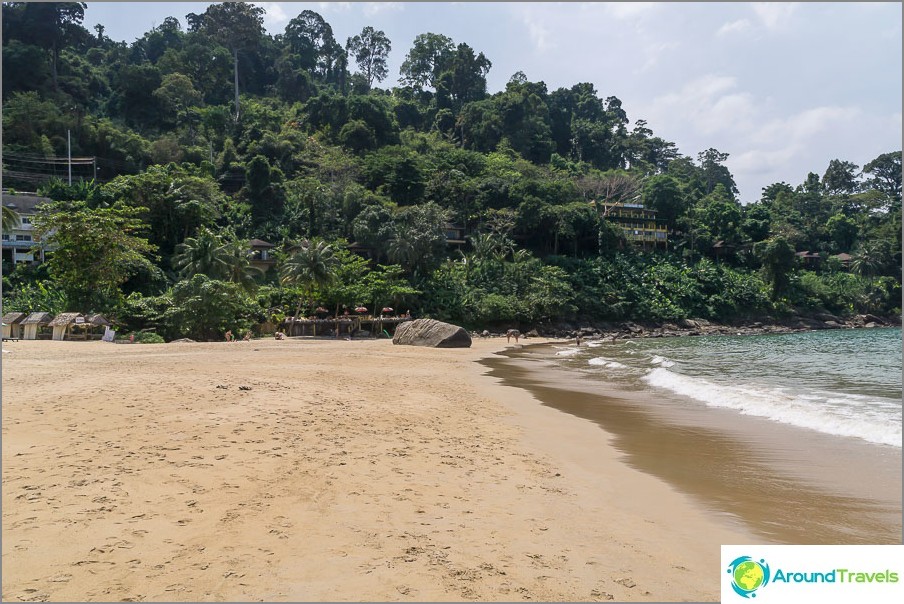 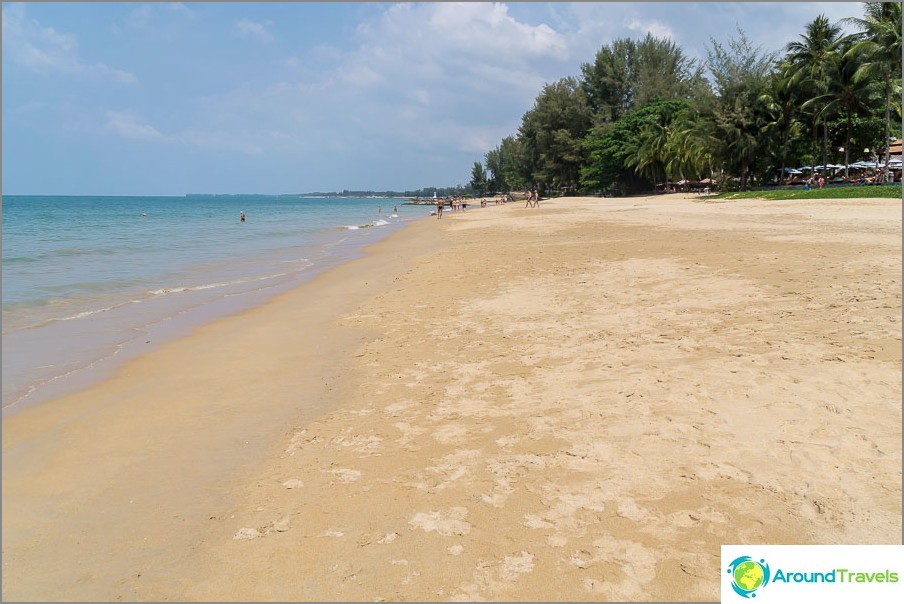 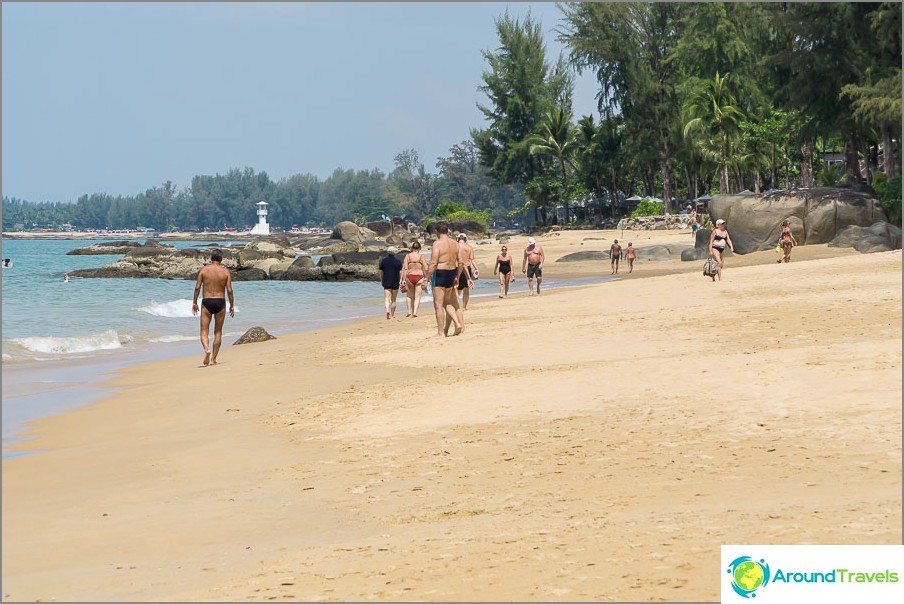 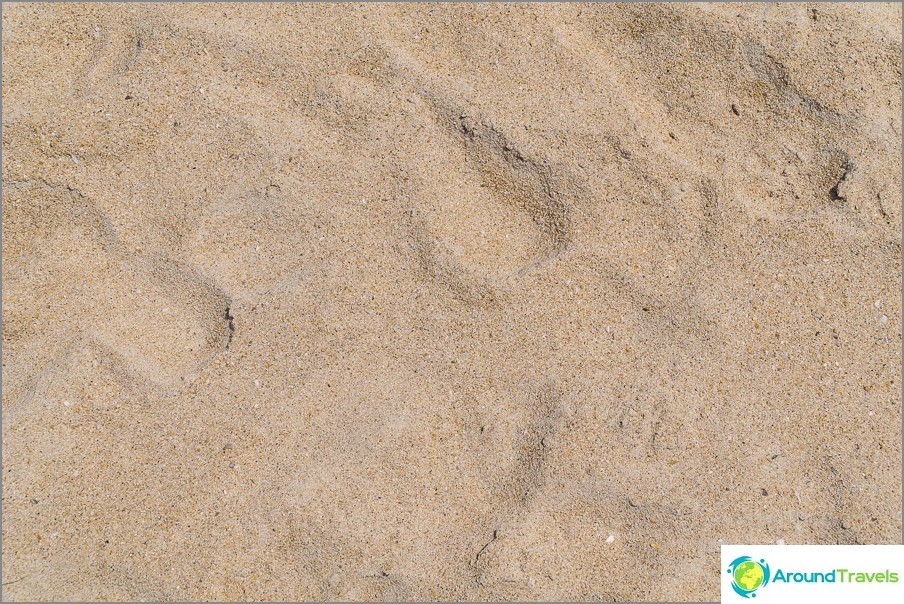 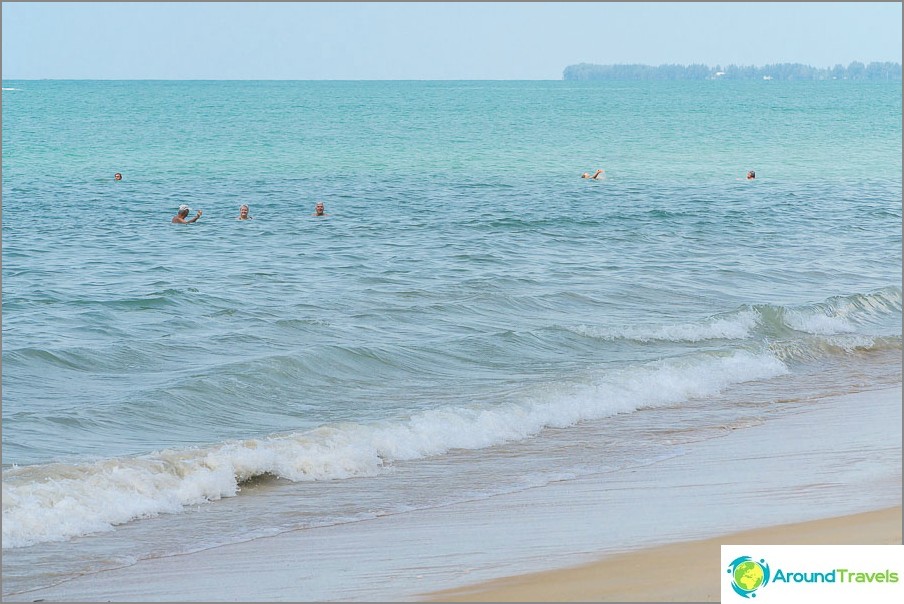 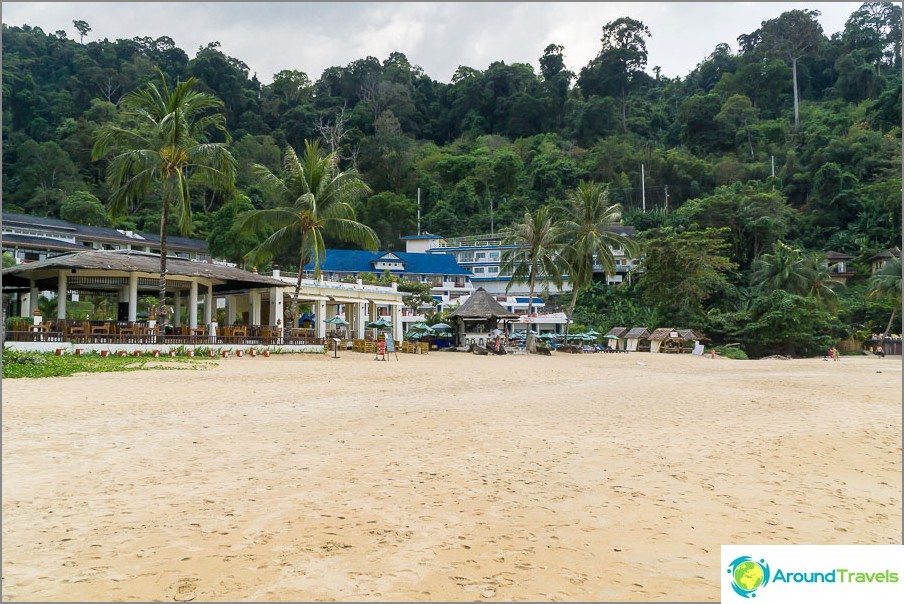 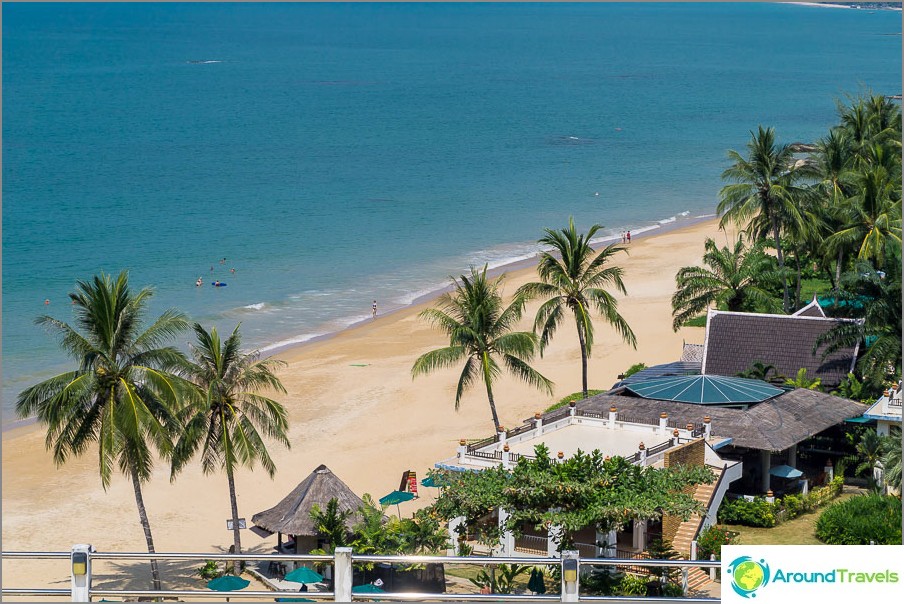 Most of the shops are located on both sides of the highway, there is also 7-Eleven, McDonald's, banks, cafes and travel agencies, etc. There are also cafes and shops on the main street of Nang Thong Road, leading to the sea, and on Soi 1, which runs along the coast. But in general there is not enough of everything, you have to go to the track.

In the north of the beach, endless massage awnings, simple beach cafes and sun loungers with umbrellas.

Of the attractions in this area there is a Chinese temple, as well as two lighthouses - one on land, the other in the sea, a hundred meters from the coast. A peculiar attraction of the beach can be called large boulders sticking out of the sand on land and in the sea. They add flavor to the beach. 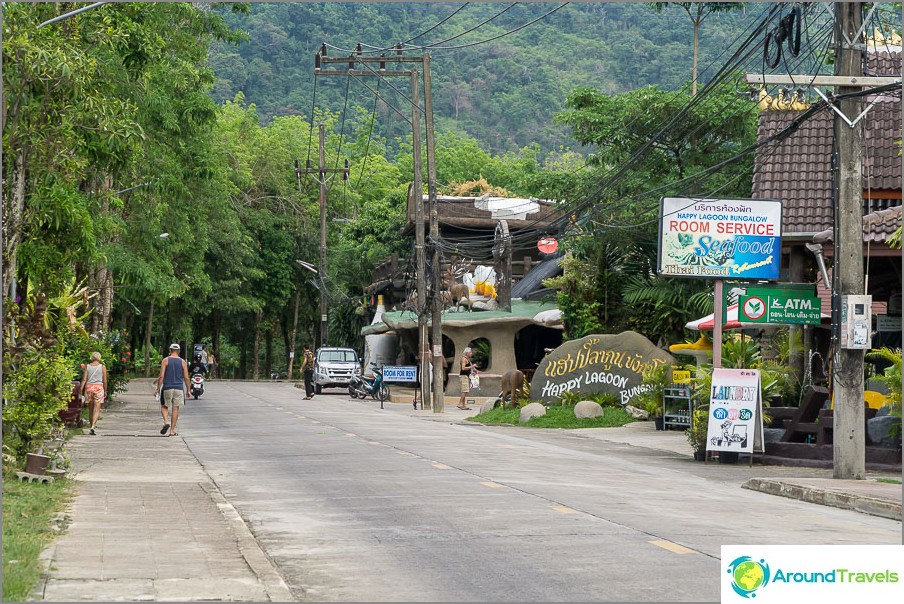 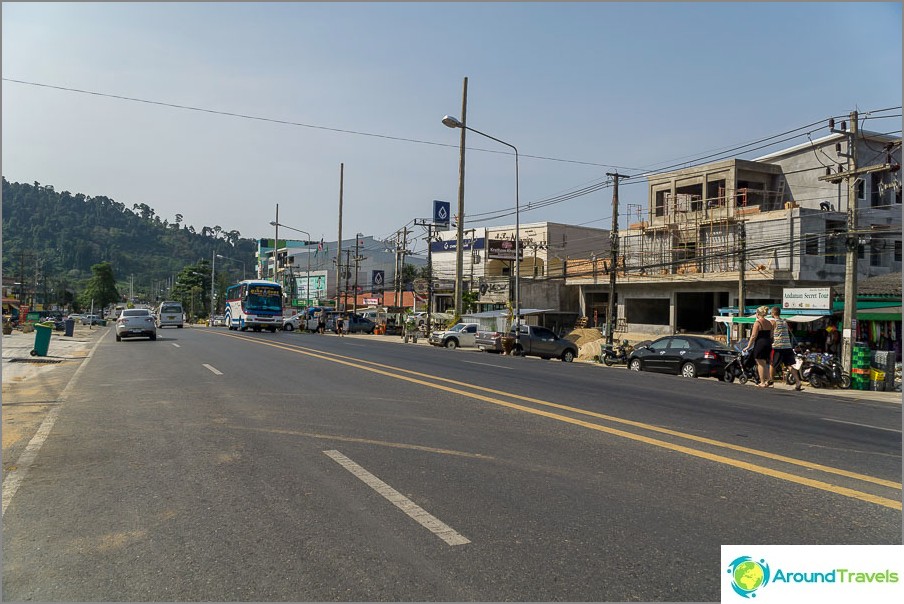 The track opposite Nang Thong, there are cheap hotels

Inexpensive hotels and guesthouses are located mainly along the main highway. If we talk about beach hotels and resorts, then in the north of the beach, where it borders with Bang Niang, there is a good and popular La Flora Resort & Spa Khao Lak. And from those closer to the center of the village, there are several hotels with a good rating: Khaolak Bhandari Resort & Spa, The Leaf Oceanside, Moracea by Khao Lak Resort, Sensimar Khaolak Beachfront Resort .

Sunset Beach includes Khaolak Bayfront Resort and of course the pleasant atmospheric Khaolak Sunset Resort. There are also cute Khaolak Wanaburee Resort and Khaolak Palm Beach Resort next to them. .

If you are driving from Phuket, then after passing Khao Lak beach and going down the highway from the mountain, you immediately find yourself in Bang La On village, which adjoins Nang Thong beach.

You can drive to the Khaolak Sunset Resort by car or bike, there is a parking lot. The guards are not very willing, but let them into the territory of the resort. On the beach from the north, you can go there completely free. In general, the main street of the village (Nang Tong Road) runs to the beach perpendicular to the highway, which abuts against Soi 1, which runs along the coast.

There is a large parking lot on this embankment street near the lighthouse. Along the entire beach, you can freely walk from north to south and back.

Nang Thong Beach
It is considered the most developed in the resort, but for me, Bang Niang is also in this regard. There is enough infrastructure, kilometers of bathing beach, you can walk to Bang Niang. The southern part is often called Sunset Beach, but it is essentially the same beach..
More about the beach. 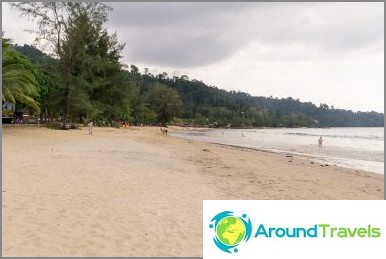 It is considered the most developed in the resort, but for me, Bang Niang is also in this regard. There is enough infrastructure, kilometers of bathing beach, you can walk to Bang Niang. The southern part is often called Sunset Beach, but in fact it is the same beach. Read more about the beach.