Mini Siam is a park of miniature replicas of architectural structures from around the world. There are similar parks now in many countries. Usually they represent architectural monuments of one region or country. In Thailand, too, at first there were copies of only the sights of Thailand and neighboring countries of this region, but later they decided to add replicas of world monuments to them..

Now the park is thematically divided into «Mini Siam» and the so-called «Mini Europe». There are many beautiful historical temples in the Thai part of the collection. Each thumbnail has a sign with a description next to it, but in few places the location of the object is indicated, so you have to google where it is. You can come here to find out what Thai attractions you would like to see live later. And it's also fun to find those miniatures that I've already seen in real life..

Mini Siam is one of the oldest attractions in Pattaya, it was built in 1986. Now its area is 4.5 hectares. The territory of the park is well-groomed, with neat paths and lawns, flower beds, ponds and neatly trimmed bushes, next to each layout there is a plate with the name and a brief description in Thai and English, and in the evenings beautiful lighting turns on.

The part of the layouts related to Siam is made on a scale of 1:25 and includes very interesting and detailed copies of the architectural structures of Thailand (Siam) and neighboring countries. For example, there is the Cambodian Angkor Wat. At the same time, the park presents both ancient structures, for example, from the historical park in Ayutthaya, and modern ones, like the Bangkok Victory Monument. A copy of which, by the way, is the oldest in the park. 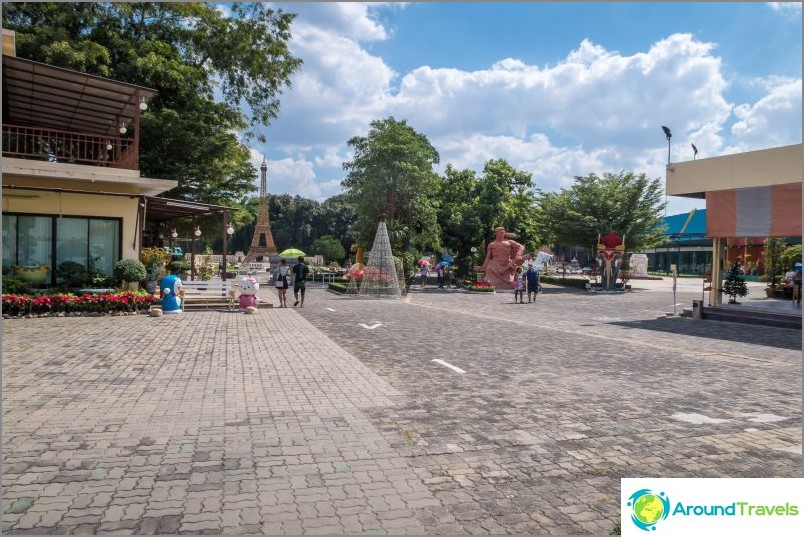 View from the entrance to Mini Siam 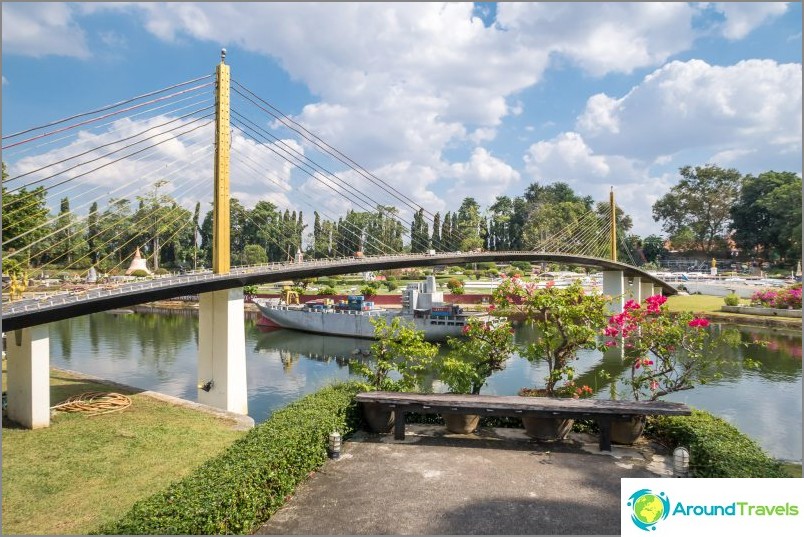 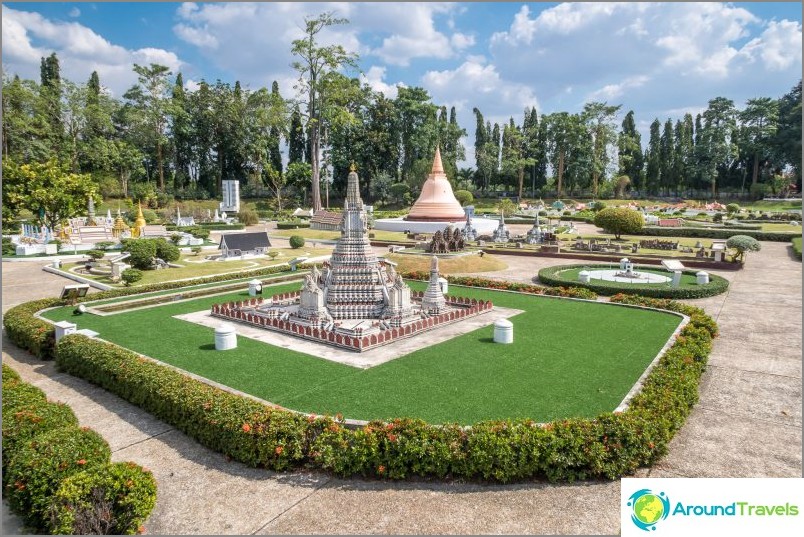 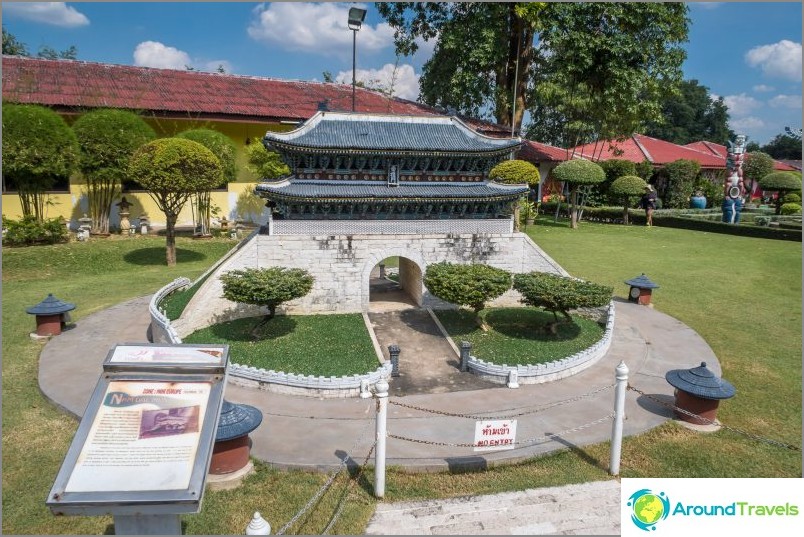 Each layout has a description plate 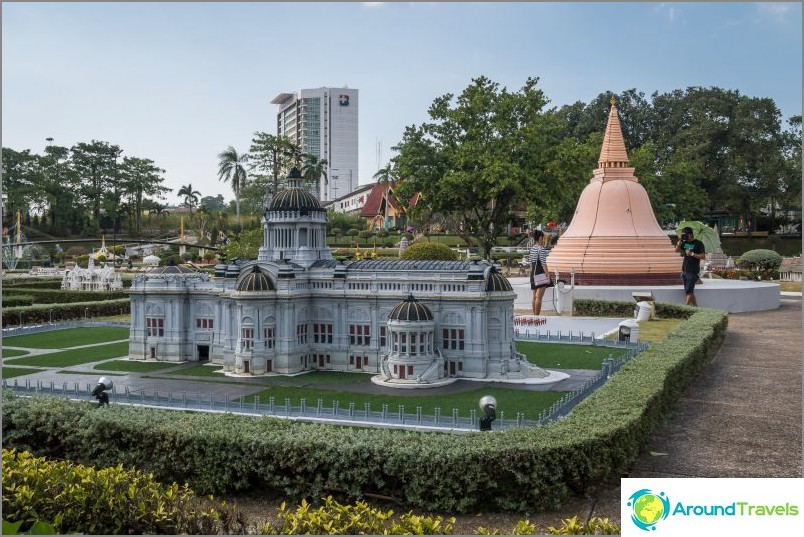 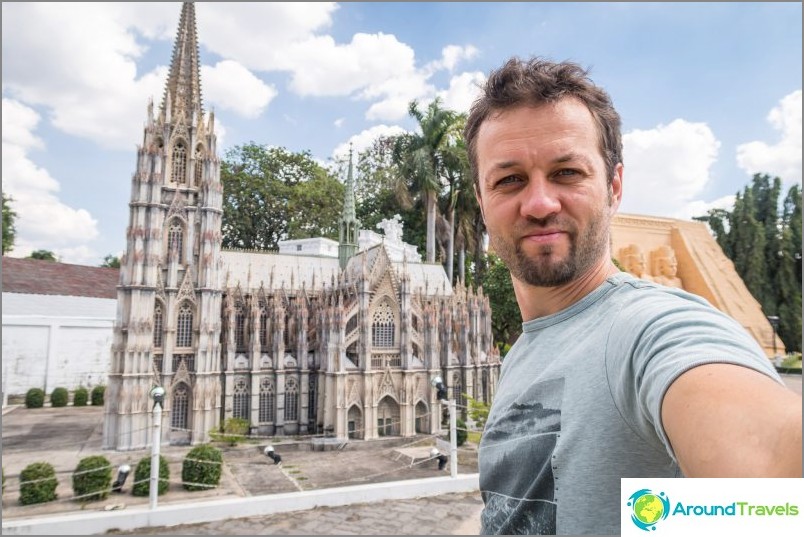 Despite the cons, I personally liked it 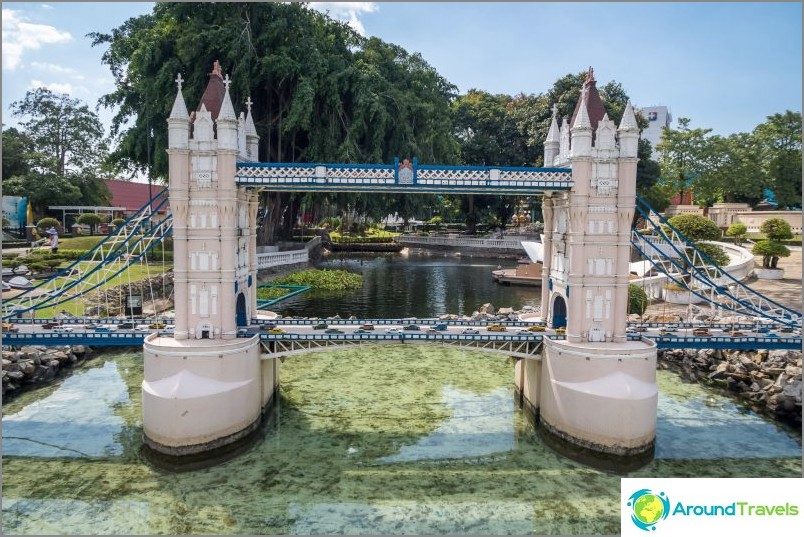 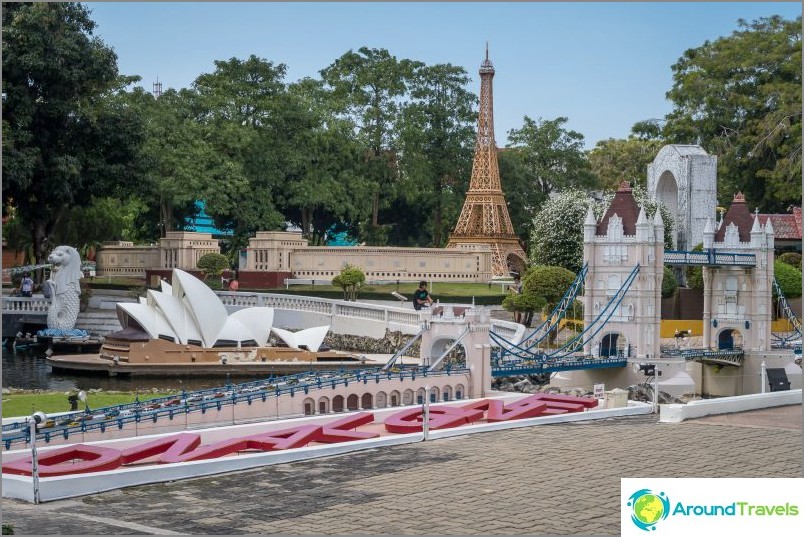 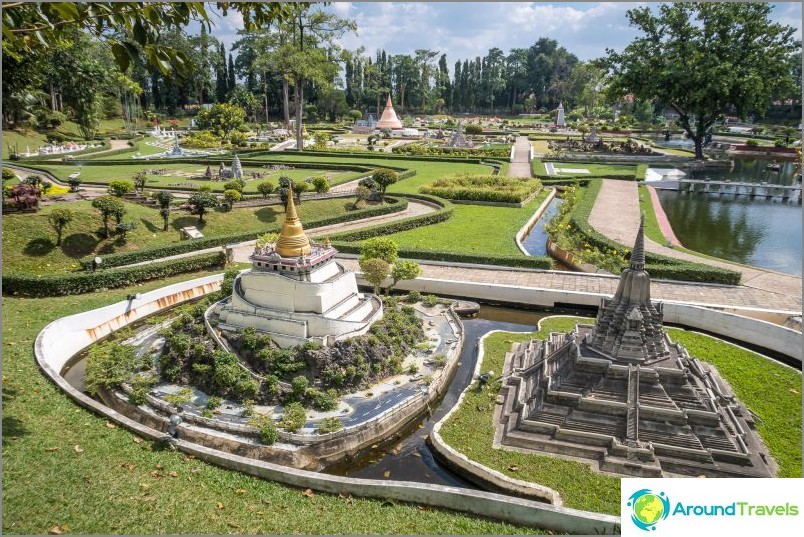 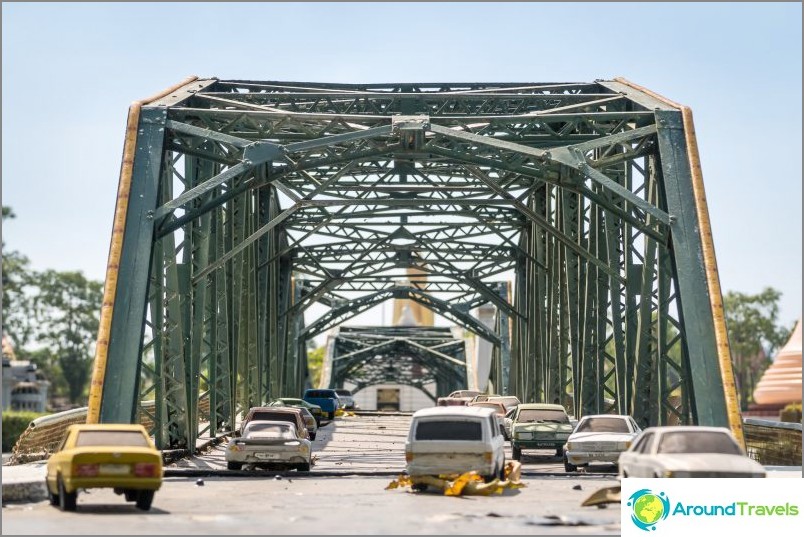 A small part of the exhibits are in disuse 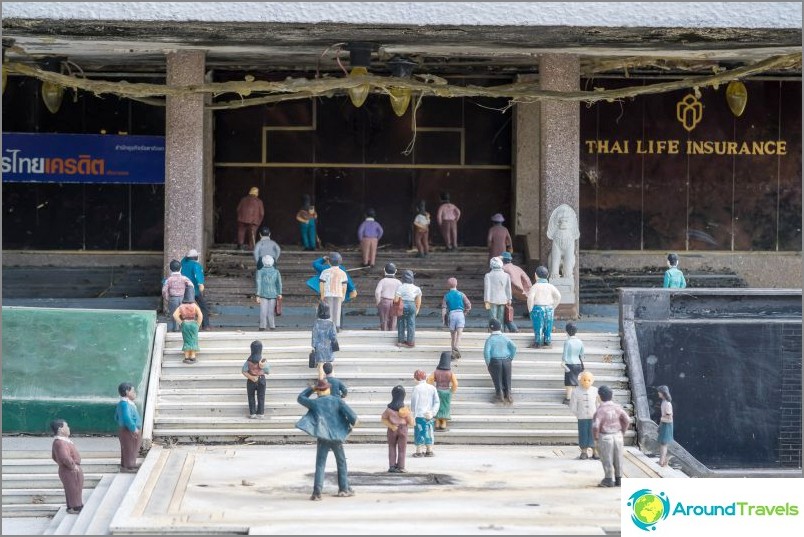 And here, too, it is clearly noticeable 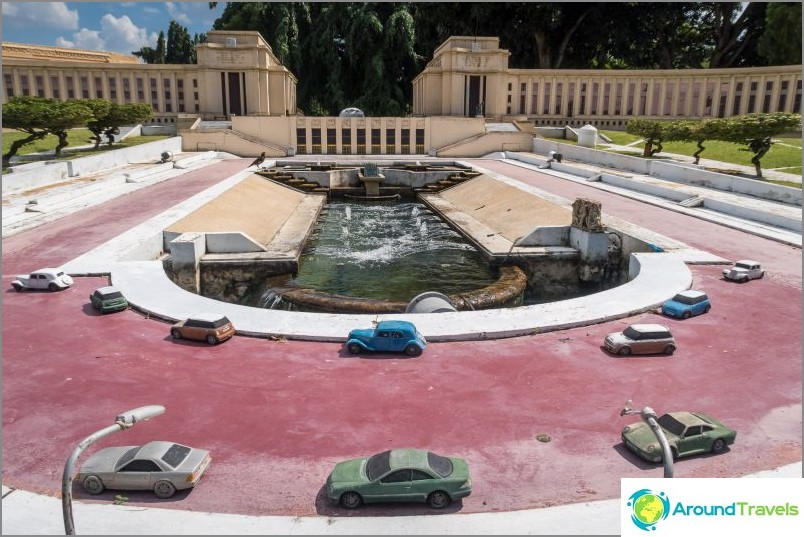 As I understand it, some of the models were previously valid. Trains rode by rail, planes moved around the airport, lights blinked and burned. Perhaps even some of the cars were moving. But judging by the state of these models, nothing works anymore, rusted, covered with a century-old layer of dust. It's a pity, I always loved railways and similar layouts, I would gladly look.

Some later copies of various world masterpieces of architecture are made larger and not very detailed. There are such «hits», like the Eiffel Tower or Tower Bridge, the Colosseum, the Leaning Tower of Pisa and not at all European Sydney Opera House, Statue of Liberty, Egyptian Temple, etc. This, of course, is not a complete list of layouts that can be seen in the park. Russia is represented by St. Basil's Cathedral and sculpture on Mamayev Kurgan in Volgograd.

In general, the park is interesting to visit, there are usually not very many visitors here, you can safely walk along the well-groomed paths surrounded by lawns, take pictures. There are benches with a shadow. 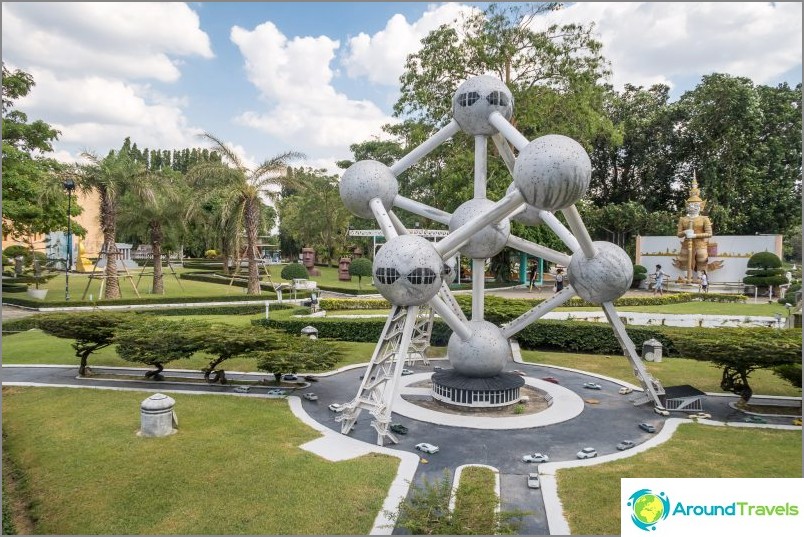 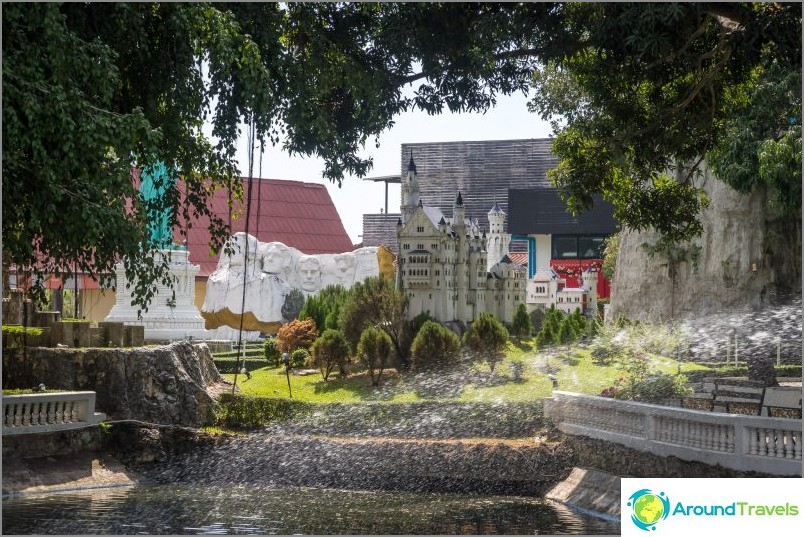 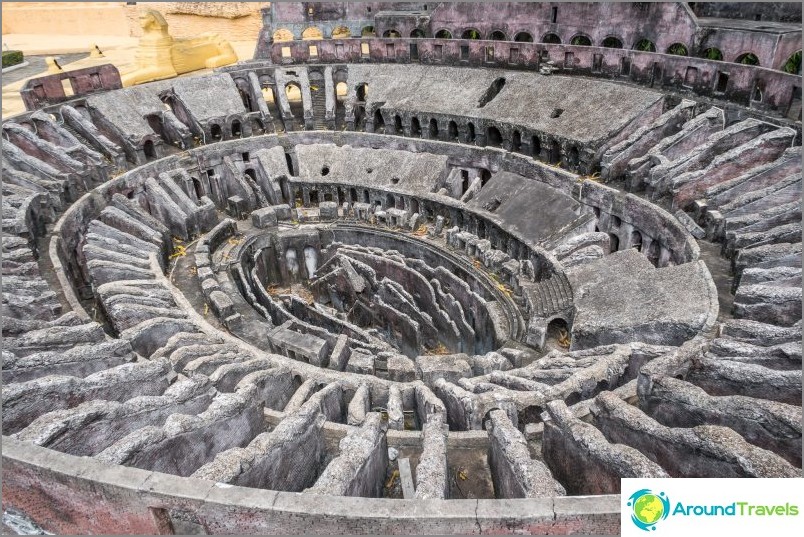 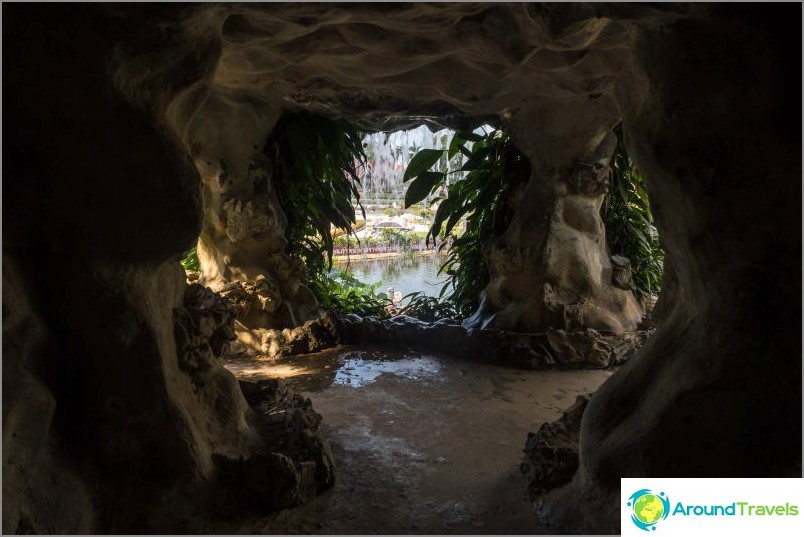 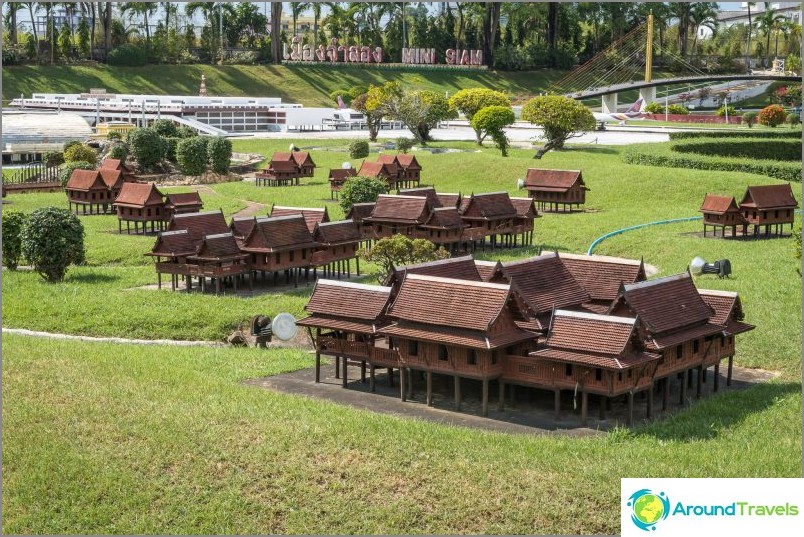 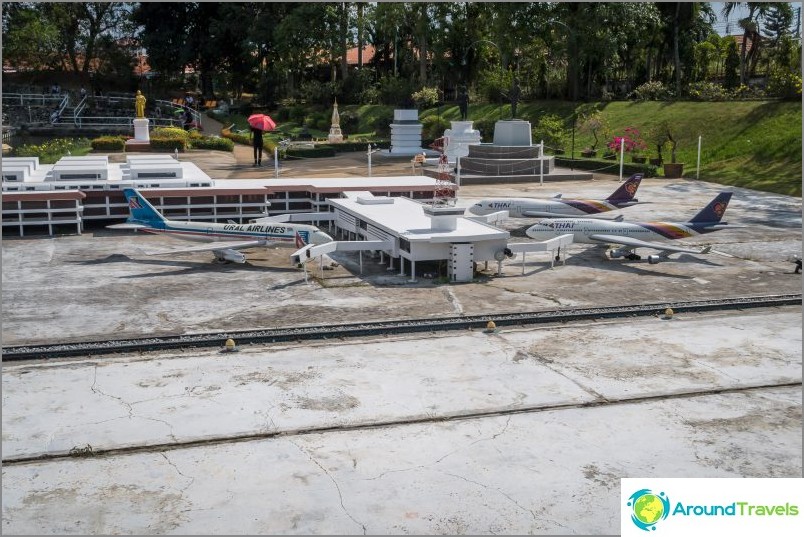 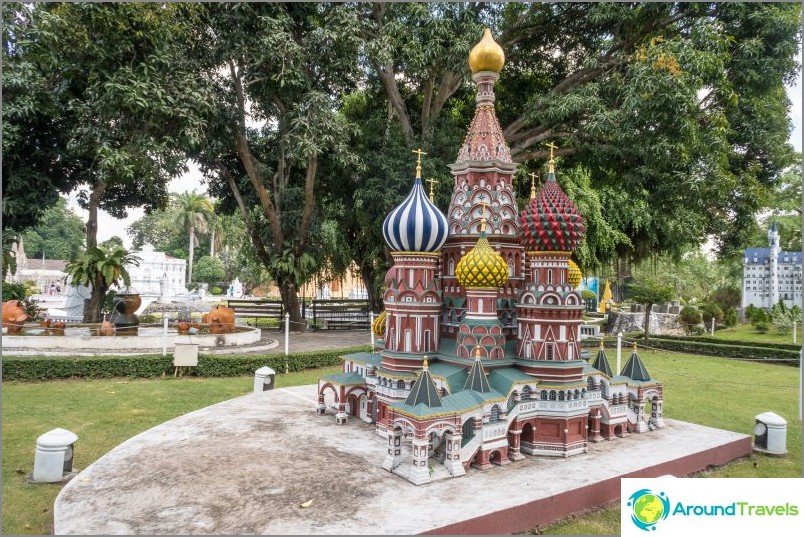 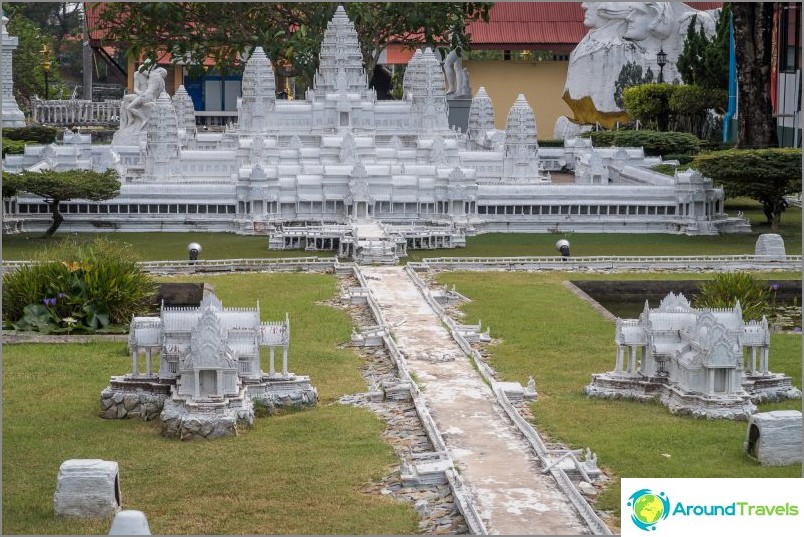 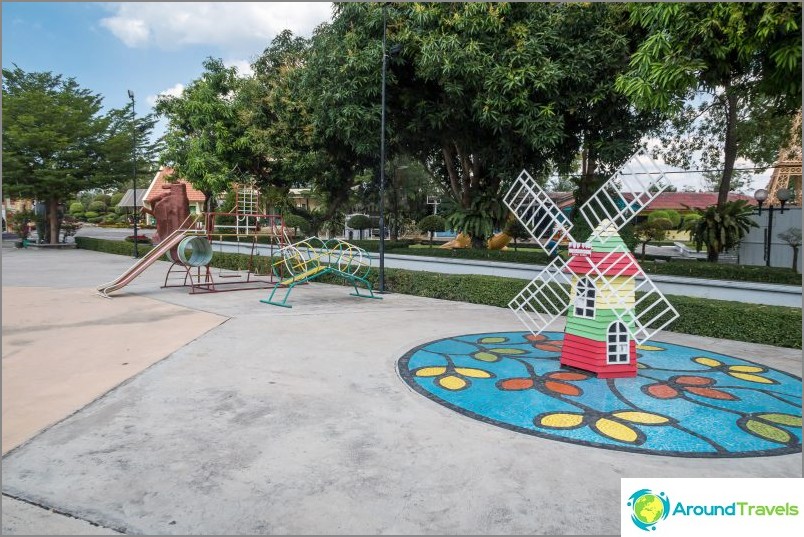 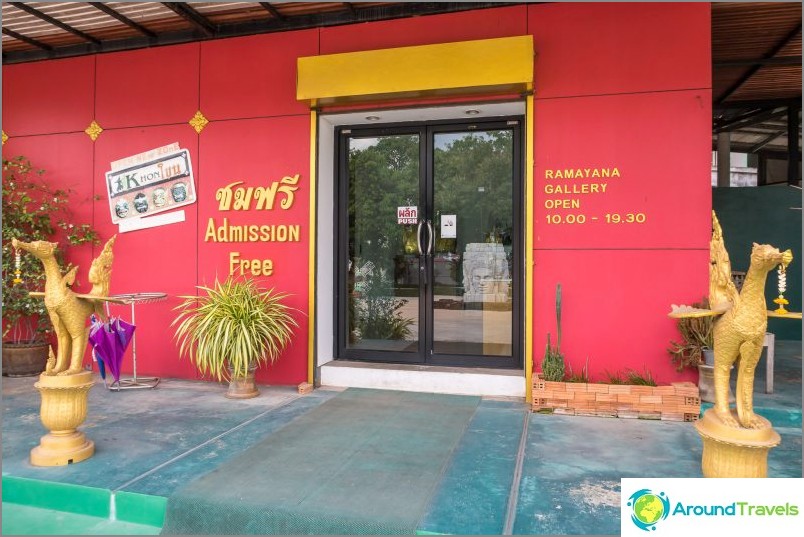 Entrance to the free gallery inside the park 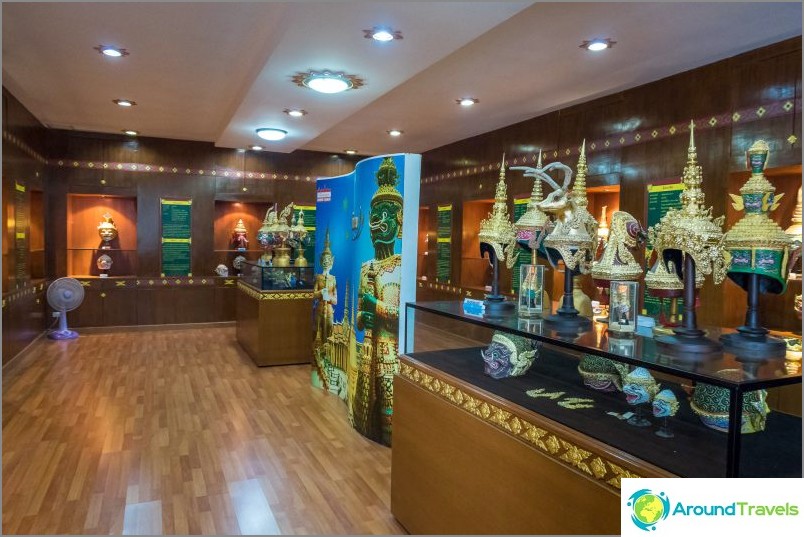 The cost of a ticket to the park is 300 baht. It is cheaper under Thai license. Children 150 baht.

If you are more than one person, you can save a little and buy tickets through Klook. If you don't know, then this is a cool site, where you can often get tickets cheaper than at the official ticket office.

Mini Siam also sells «excursion» without a guide, in fact a transfer from / to the hotel. Sold by many travel agencies. The cost is about 500-600 baht. If you live far from Mini Siam and do not have a rented bike / car, then the transfer is more convenient, of course.

For a quick inspection, 1 hour is enough.

The best time to visit the park is before sunset. Approximately one and a half to two hours before sunset, the sun is no longer so scorching and the light for photographs is much more interesting. Sunset in Thailand at different times of the year occurs between 18 and 19 hours. Therefore, it is convenient to come to the park by 16: 00-17: 00. With the onset of dusk, the backlight turns on in the park. With her, miniature structures look completely different and sometimes more interesting. Lush palaces and temples are especially well lit «siamese» parts of the park.

On the territory of the park there is a cafe, an ice cream shop, benches, a toilet, sun umbrellas for visitors. All this is located next to the entrance. So there are all conditions to walk in comfort. For children, there is a mini-playground and several attractions on the territory.

How to get to the park

The park is located on the 143rd kilometer of the Sukhumvit highway, within the city limits. Getting to it on your own, by public transport, is not difficult. The park is located on the side of Sukhumvit, which is farther from the sea, approximately opposite Bangkok Hospital Pattaya, right next to the entrance to Mini Siam is McDonald's, you can navigate by it when looking for an entrance to the park. In the same place, next to Mini Siam, there is a go-kart and a Muay Thai arena.

You can independently get to the park by taxi or, if you wish, by tuk-tuk. White tuk-tuk go around Sukhumvit, the fare is 20 baht. And you can get to Sukhumvit along one of several streets leading from the sea (Teprazit, South Street, Central, North), tuk-tuk also walk along them. In principle, you can walk on foot if you are in the center of Pattaya. 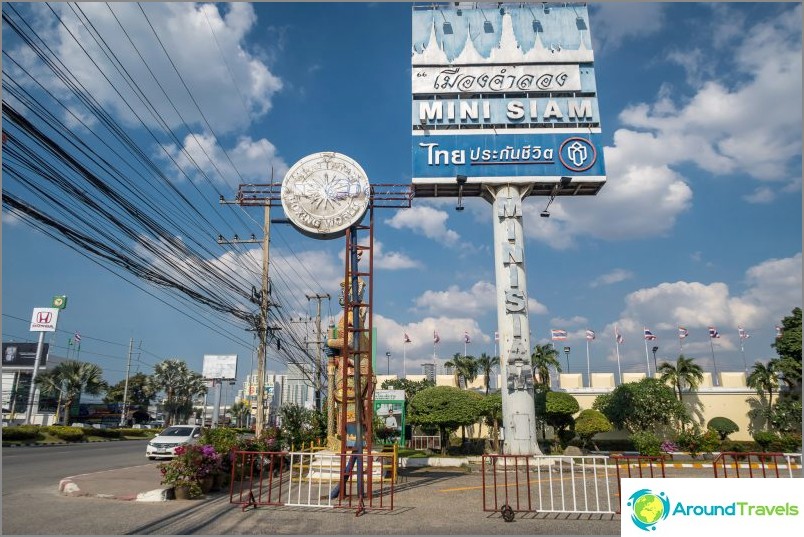 Mini Siam Park
A park that displays miniatures of many famous landmarks in the world. Half of the park is Thai. Nice place.
More about the park. 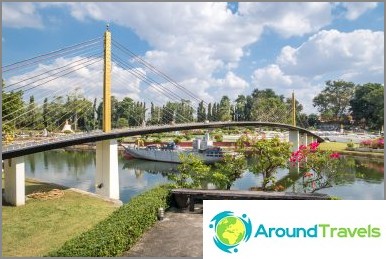 A park that displays miniatures of many famous landmarks in the world. Half of the park is Thai. Nice place.More about the park.