Sim card Drimsim for traveling in Europe and other countries

The cost of the Internet while traveling has become available through special travel SIM cards. I remember about 5 years ago I looked at the prices and realized that only hardcore: Wifi in a hotel or local sim cards. Yes, of course, local SIM cards are still my favorite, but sometimes it is very useful to have a SIM card for travel, since it is universal and works in any country, for example, in the one where you are passing through, or where on one or another reasons do not want to buy a local sim card. I'll tell you about one of these cards today, I've used it for almost a year. She's the first on the list, I want to buy a couple more to test.

How to order a SIM card for travel

Everything is done through the application, everything is simple there. The only thing I had a little problem with entering the delivery address. It was not possible to enter the building in the address line, so I entered the building, entrance and floor in the field «A comment».

Delivery was offered only within the Moscow Ring Road, and since I was in Butovo, I ordered it to my friends. But the delivery is fast. I ordered it on Sunday at 2 pm, brought it in at 7 pm. When ordering through my link, you can get a bonus of 7 euros to your account, a trifle, but nice, you don't lose anything.

The very first delivery payment went smoothly. The payment is in euros, so I tied the card to Kukuru (there will be 1 conversion at the rate of the Central Bank from euros to rubles at once). Strange, but it was impossible to replenish the account until the SIM card was activated. It would be worth warning about this, and not getting an error in the application. Although not critical, of course.

Brought a package with Drimsim, sim cards of all sizes

SIM card activation is simple: you scan your SIM card, scan it, all the necessary fields are recognized by the application itself. Verification of passport data takes a couple of minutes. If there are any problems, the support responds relatively promptly, I even wrote to them at 2 a.m.. 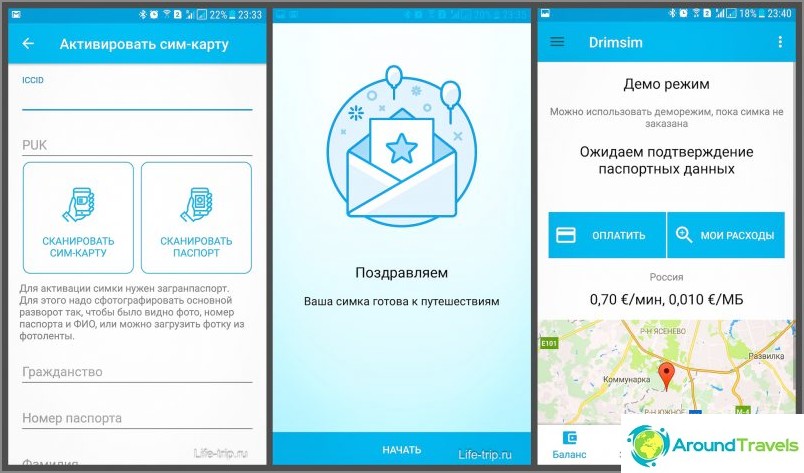 After activation, I put 25 euros at once, after which a bonus of 7 euros was added to me. Exactly on the same friendly link I ordered a SIM card, which I offered you now.

And I also immediately configured «Auto payment», convenient function, you will never be left without connection. I put that if the balance is reduced to 5 euros, replenish the balance by 10 euros. 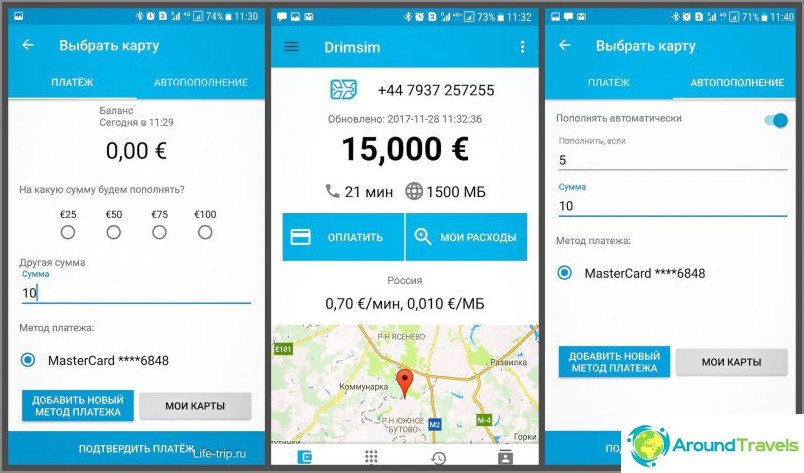 In most European countries, 1 GB of internet costs 10 euros. IMHO normal price, but I agree that it is not the best, but more on that below. Basically, we will talk about the Internet, because when traveling, calls are very rarely needed, everyone already has all sorts of messengers like Whatsapp, and other types of Viber allow you to call mobile and landline phones. I wrote more about cheap calls in separate article.

Delivery is 10 euros, and the SIM card is free. In fact, it's all the same what to call here, but the point is to get a SIM card you need to pay 10 euros anyway. There are no free pick-ups. But this is only one time, and then you can use it for years.

Put the application on my link and you will be given a bonus of 7 euros after you activate your SIM card and deposit 25 euros into your account. Nice bonus.

Usually 15-30 euros is enough for me for 2-4 weeks on a trip, that is, 1.5-3 gigabytes. On the way to see the maps, google, post pictures on Insta, etc. Watching movies and syncing clouds via Wifi in the hotel.

My review after using DrimSim

I activated the SIM immediately after receiving it, back in Moscow. Smskoy Internet settings came and I installed them. Do not delete this message with settings, install immediately. In Russia, the Internet started working right there.

There were reviews on the forums that periodically the settings in a new country do not come and you have to set them manually. I don't quite understand what this is about, maybe they differ depending on the country, but obviously not everywhere. I have the same setting (APN: chili), and in countries such as: Russia, Czech Republic, Italy, Spain, Israel, France, Thailand - everything worked. This is where I have already been and used DrimSim.

Yes, in France, upon arrival, the phone did not want to connect, but the problem was that either it was necessary to turn off LTE, or the APN access point remained from the Russian SIM card. When I did all this, it immediately worked.

At the time of this writing, I have this card for about a year and most of all I used it in the Czech Republic and Italy, on a smartphone and on a computer (distribution via phone). The Internet did not fly directly compared to Moscow, but it was enough for surfing, social networks, YouTube and talking with video. The speed was at least 3-7 megabits. Well, accordingly, the larger the city, the better the connection, after all, there is a direct dependence on the local operator. There were also failures when it was lost or barely worked, but in general, the coverage is normal.

The worst thing is that Drimsim does not yet work with LTE in all countries, from which the speed may be lower. Especially recently I asked technical support what happened to LTE and they answered me: «It is available in some countries, but 4G is currently in testing and may not be available in some locations. If this happens, then you must turn it off and use 3G or 3G / 2G auto.» 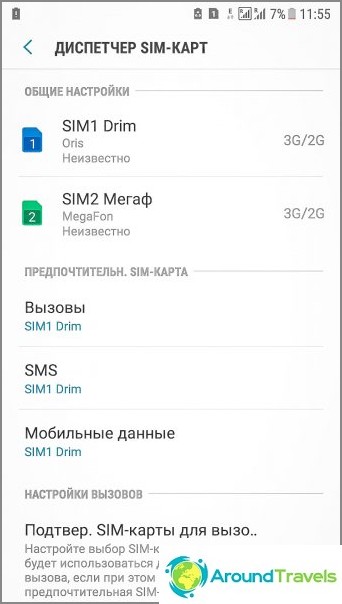 Advanced users will say - Orange could be taken for Europe! After all, it has cheaper traffic. Everything is so, yeah.

But DrimSim will still remain in my set - this is a universal travel SIM card for all countries at once. It can come in handy at first, until a local one is bought, or just, just in case, as a spare. The most important thing is that she lies and does not ask for porridge.

Conversely, if you visit many countries and need small amounts of traffic, does it make sense to buy 100 cards? For example, I am going to Cyprus, and to Singapore, there is no Orange there. I'll go for 3-4 days, I don't see any reason to bother with a local SIM card at all.

And right away you need to mention the main disadvantage of Orange and some other travel SIM cards - you have to buy traffic from them in packages that may not be used up and then simply burn out! Personally, this does not suit me very much, it is easier for me to pay per megabyte. And after the trip, you can put your SIM card on the shelf at home and forget about it for six months without consequences until the next trip..

P.S. Advise what other SIM cards to take and test? I want to have a set of 2-3 SIM cards for travel, so that it is as profitable as possible, but at the same time, so that SIM cards can not be used often.