Beach of the W-Retreat Koh Samui hotel - bounty for moneybags

Let me remind you that according to the laws of the Kingdom of Thailand, all beaches belong to the royal family, and no one can close access to the water for Thai citizens, and for other citizens too.

Therefore, if the hotel owns a piece of land in front of the beach, and its fence does not allow access to the beach bypassing, then anyone has the legal right to go through the closed area, be it at least three times private. Another question is that the severity of the laws, as in Russia, is compensated by the non-binding nature of their implementation..

Well, and security can be very categorical in matters of admission. But - not the case with W-Retreat Koh Samui.

The beach of this luxury hotel looks like it is combed with a comb. Perfectly smooth sand, the same as on everything Mae Nam, large, yellow, crumbly. The coast of the beach has some differences in height, and near the rocks on the border with Bo Phutom even a small scrap is formed, about forty centimeters high.

The beach is perfectly clean. It doesn't even make sense to list the places where there is no garbage on the W-Retreat Koh Samui beach, because there is no garbage anywhere. Generally. Absolutely. Considering the cost of rooms in the hotel, which starts from 93,000 baht PER DAY, heavenly atmosphere and cleanliness is a logical decision of the hotel administration.

The closedness of the territory, the cost of the hotel, the isolation of the beach itself from the main road of the island - all this affects the number of people on the beach. Here, all year round, there is an amazingly comfortable neighborhood of the few guests of the hotel, who bask in sun loungers, hammocks and massage awnings..

Few of the two-week package tourists know about the laws and opportunities, so coming here with your beach rug to rest under the sidelong glances of the moneybags is a sheer pleasure..

The sea is deep, with a steeply sinking sandy bottom. At low tide, the beach almost does not change its appearance and characteristics, but the sand spit, the trademark of W-Retreat Koh Samui, is more exposed. The water is cloudy even in sunny weather.

Waves are present here regularly in windy weather and are especially riotous in winter, which is noticeable by the cliff on the shore. After the storms of the winter of 2013-2014, the spit was badly damaged by the blows of the waves, it was turned somewhere to the side, and most of it was completely washed away. Hotel employees had to dismantle the logo «W», which used to stand at the very edge of the spit, and put it closer to the shore.

The beach is equipped with the latest technology, but all the fun is not for you. The only thing that is not forbidden to use is the shade of the palm grove, which gives a beautiful shade to the entire coast. 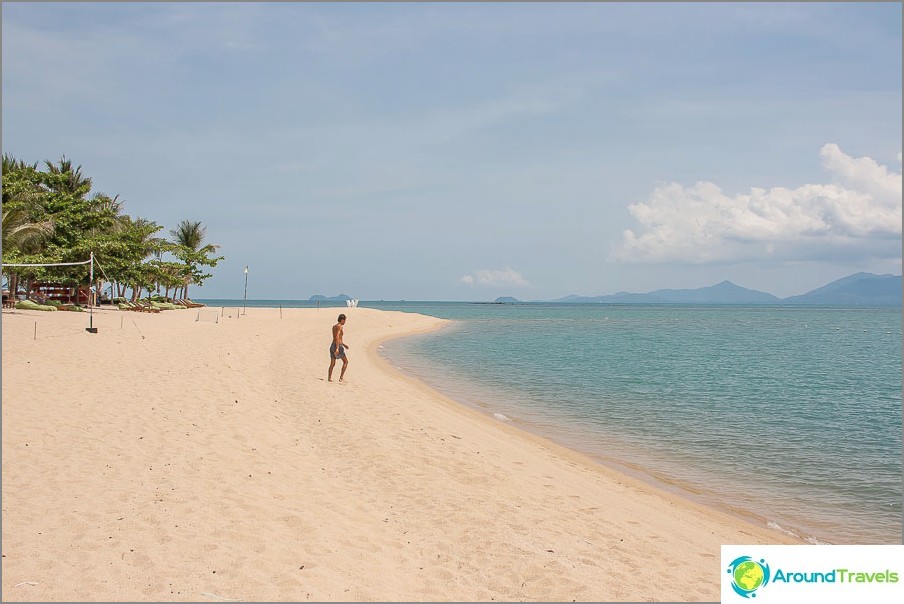 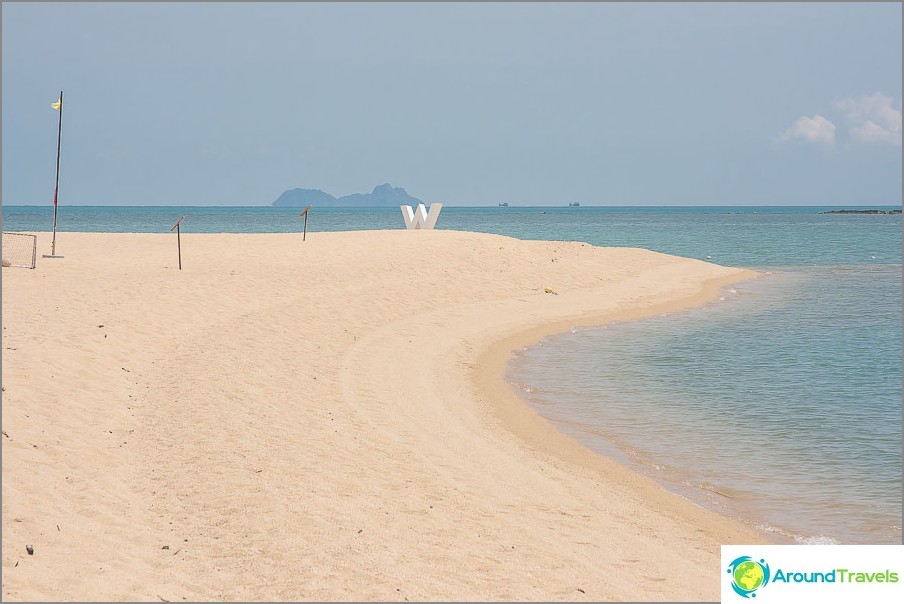 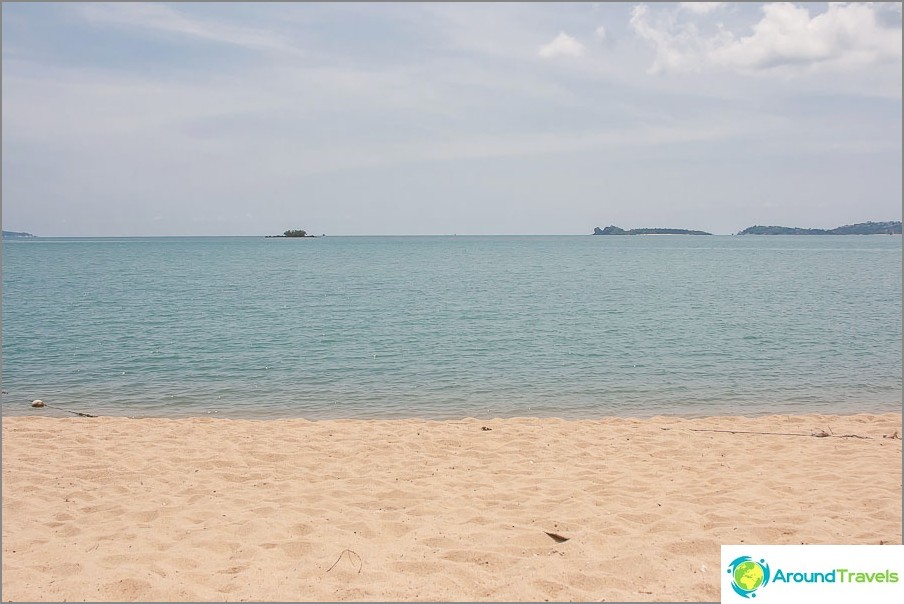 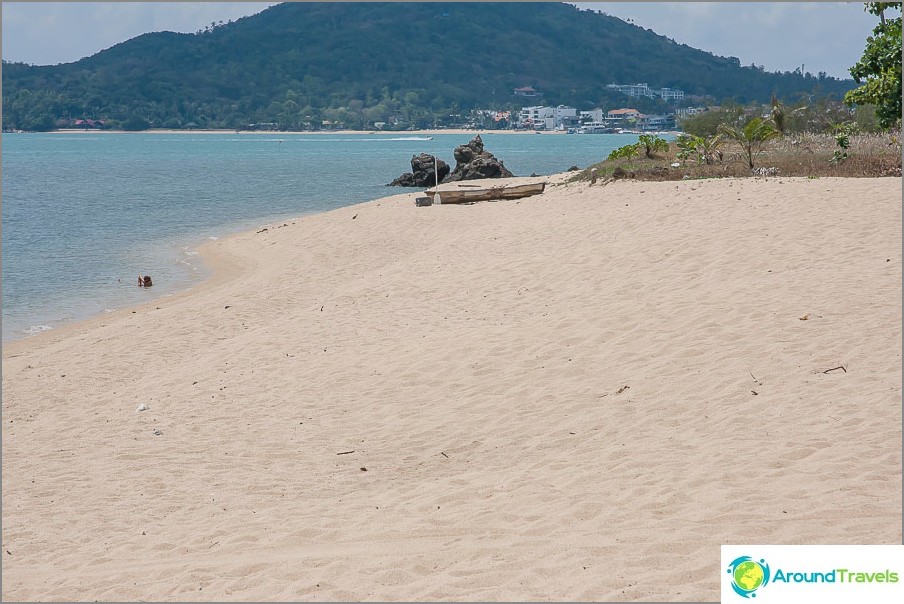 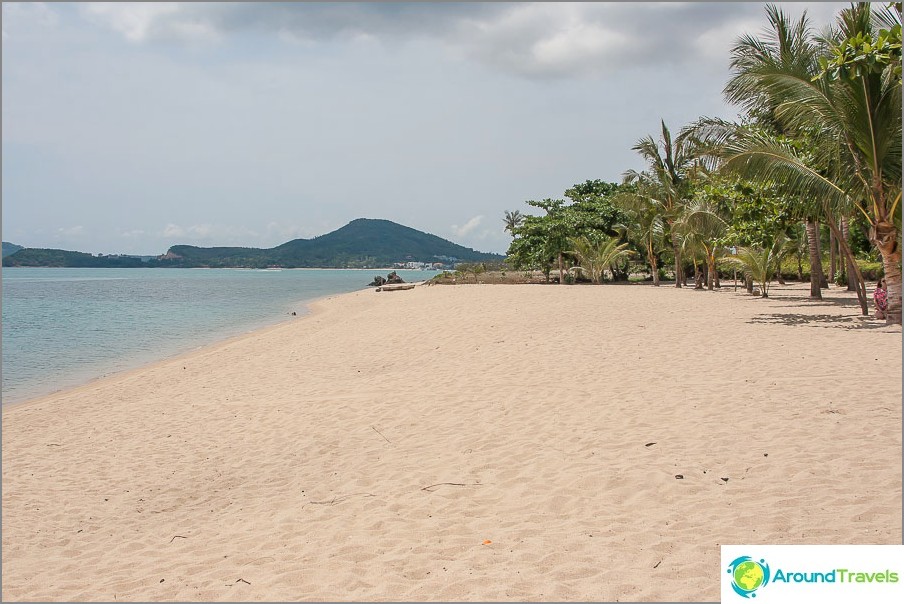 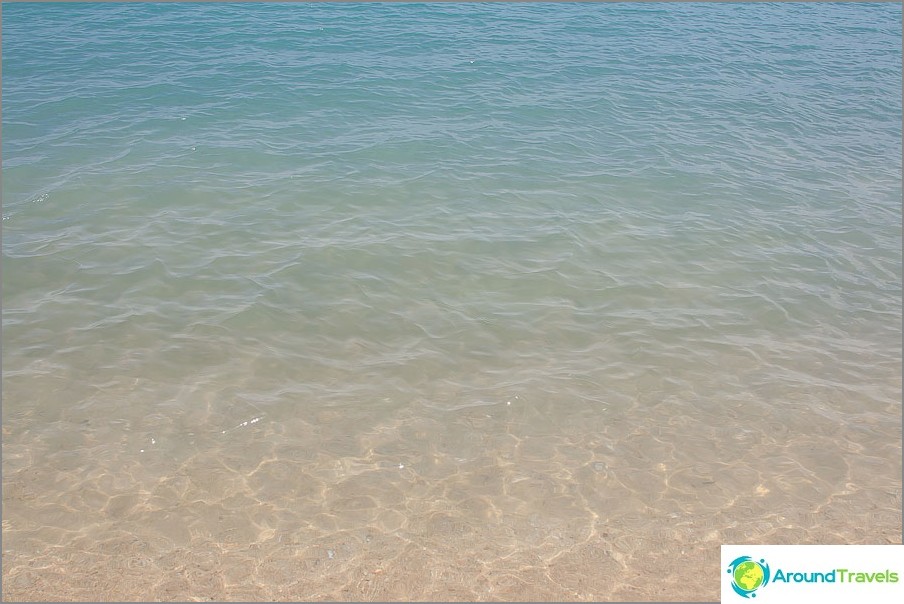 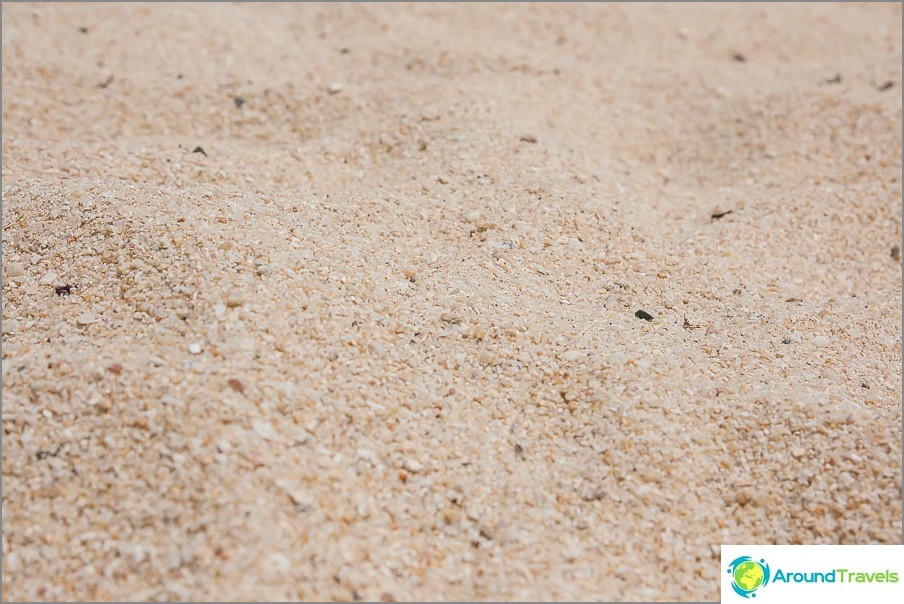 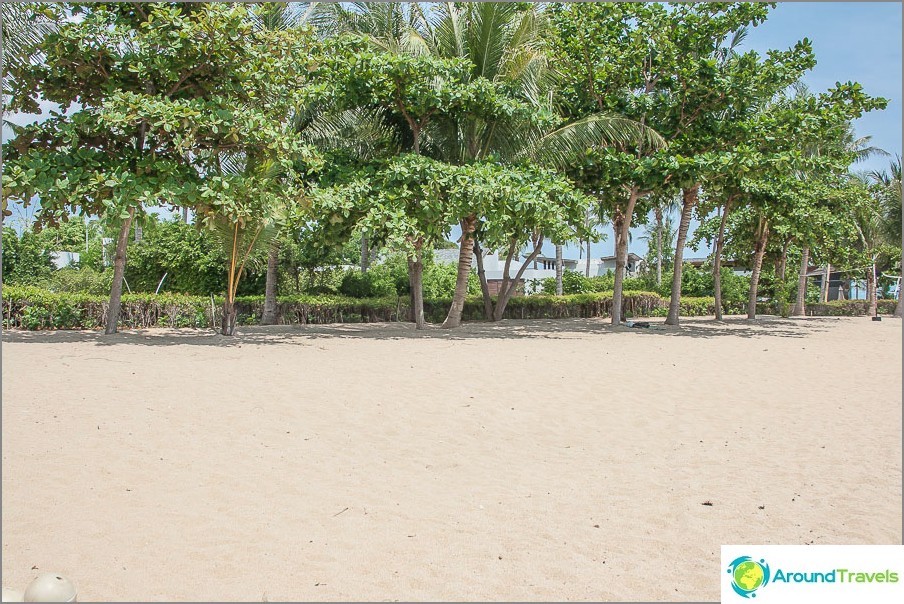 The beach is located two hundred meters from the Ring Road, between two densely populated lively areas of the island. Along the road there are all the necessary services, services, private institutions and financial organizations, water dispensers, shops - in general, absolutely everything. Big C is just a stone's throw from here, or more precisely, about 10 minutes away by car. In the same place, not far from Big C, there are Macro and Tesco Lotus.

Of the nearby attractions, within a ten-minute accessibility, there is the Wat Phu Khao Thong temple and the Secret Falls waterfall in the depths of the mountains. On the beach itself, entertainment is represented by a volleyball net, massage gazebos, a bar, and kayak rentals. A coral reef close to the coast provides an opportunity for snorkeling. 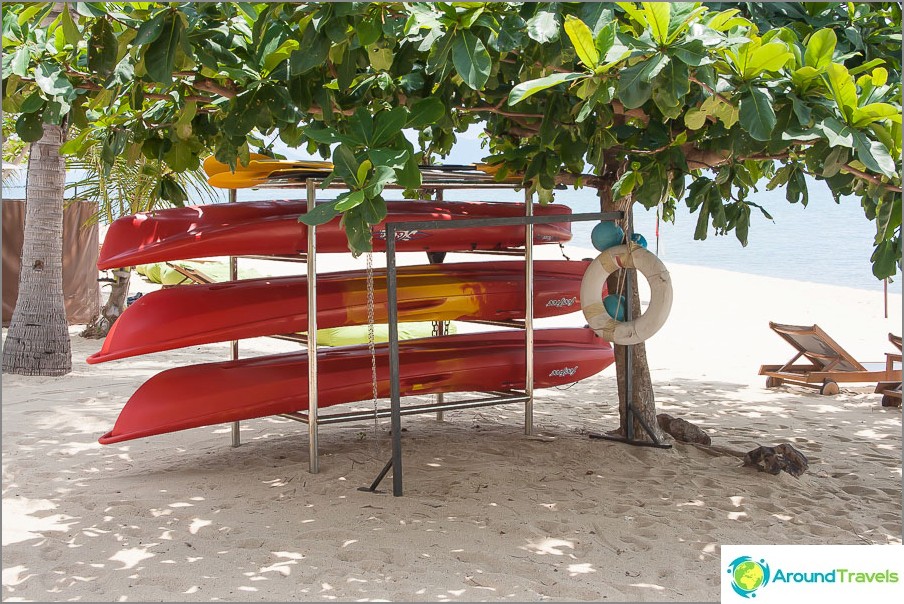 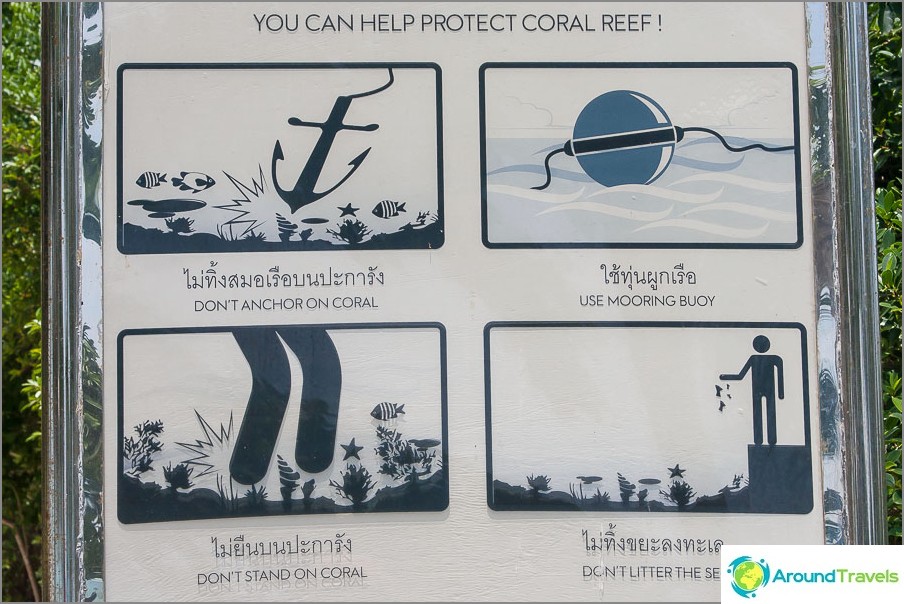 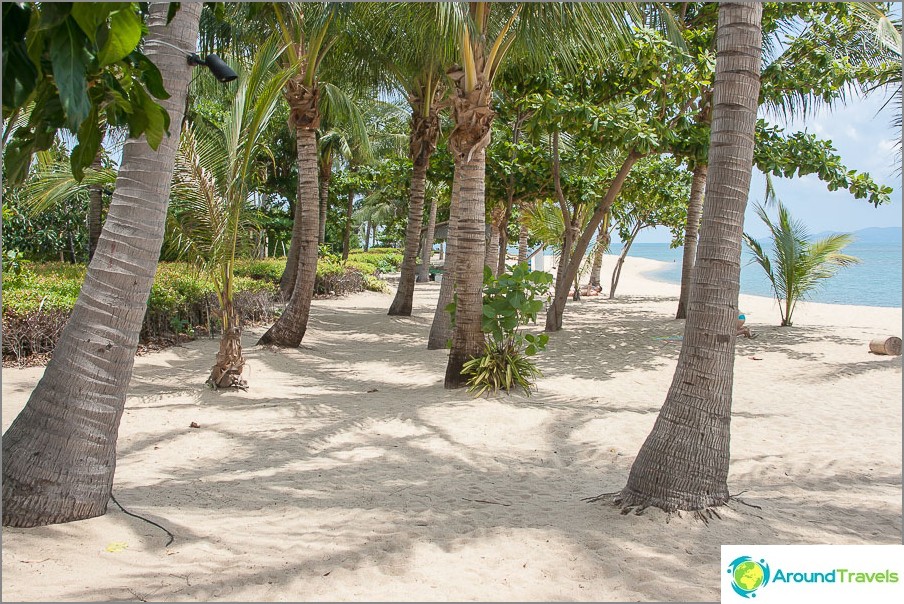 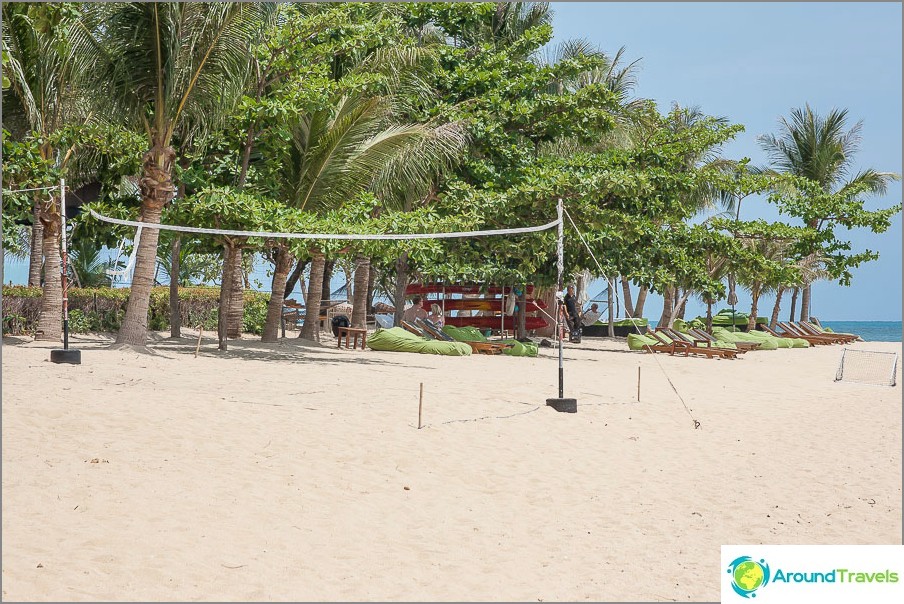 As it was said - districts Bo Phut and Mae Nam do not suffer from a lack of housing. The shore of the beach is occupied by the buildings of W-Retreat Koh Samui, and at a distance of half a kilometer from it resorts begin where you can look for a completely budget house, especially in the low season.

For example, here is a direct link to the only beach hotel - W-retreat koh samui . 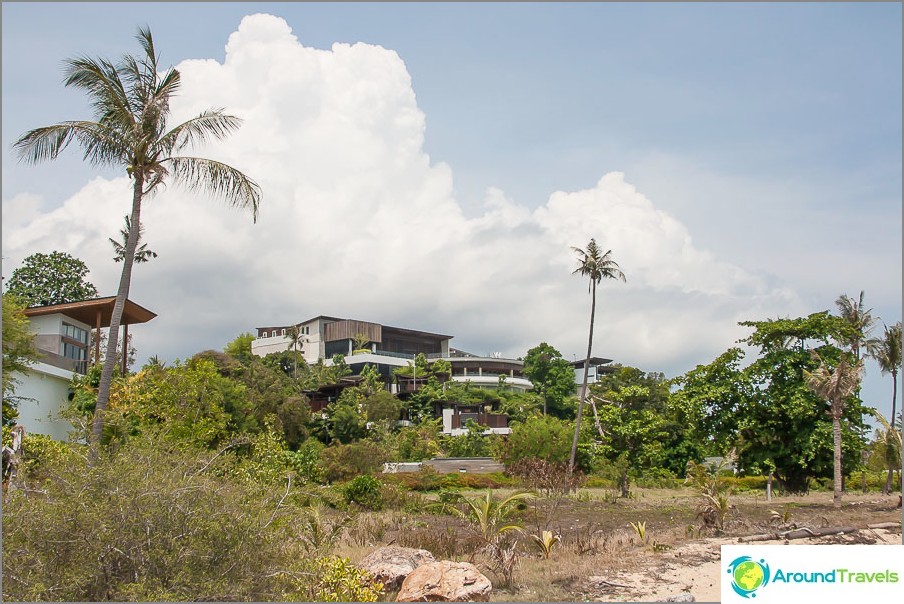 W-Retreat Koh Samui Beach is not hard to find. But the turn to it from the first time is imperceptible, especially if you go from the side of Maenam. Because the sign with the name of the hotel is hidden behind the leaves of a large tree..

Then you have to go straight all the time, pass a couple of speed bumps, until you run into a guard with a walkie-talkie. Speak the code word «tuzebich» and follow in the direction of the wave of the hand. Below you will be met by another guard and will write down the number of the equipment. There is also a small guest parking for five cars..

ATTENTION! A very steep descent to the beach along a small serpentine. ATTENTION! In the middle, and at the bottom of the descent, there is a drainage grid, at times it is pushed through by SUVs. 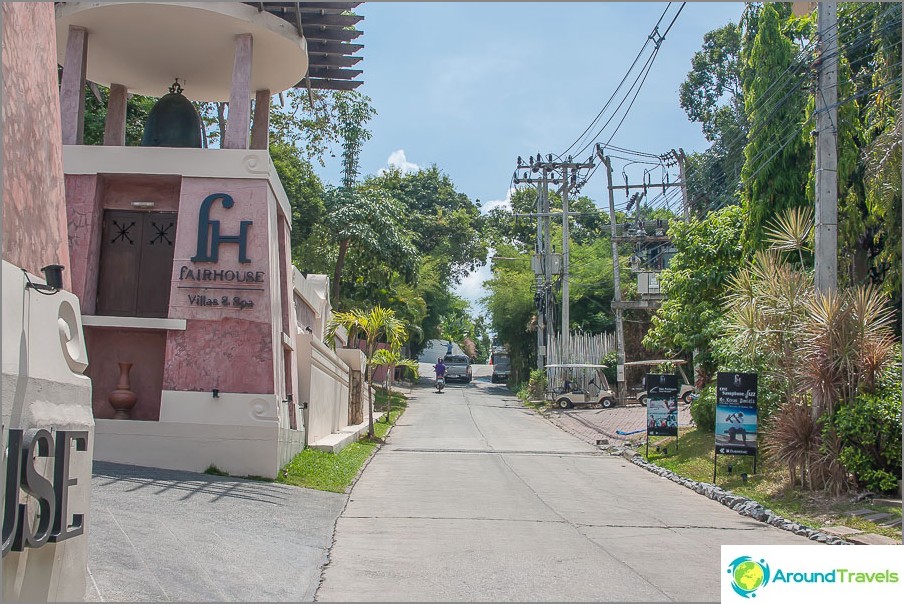 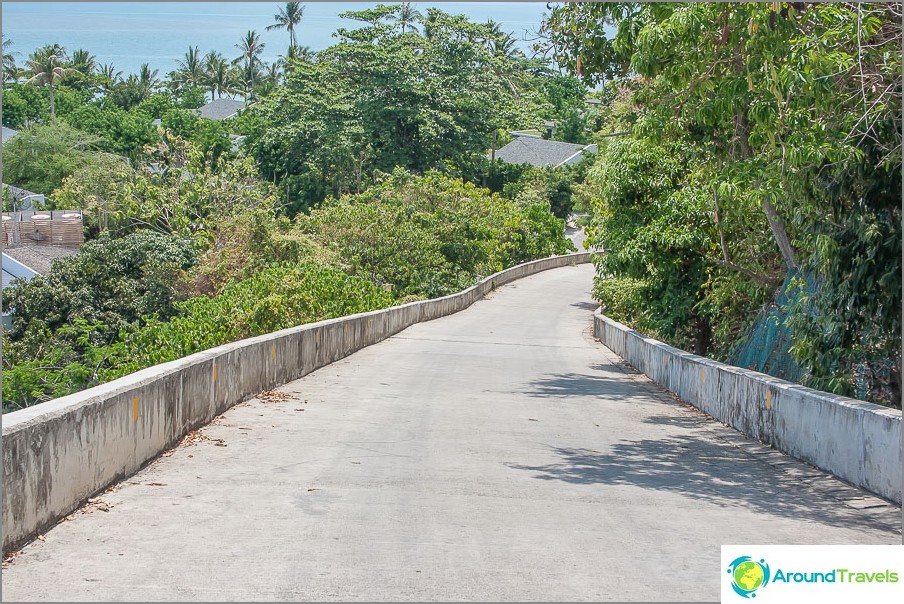 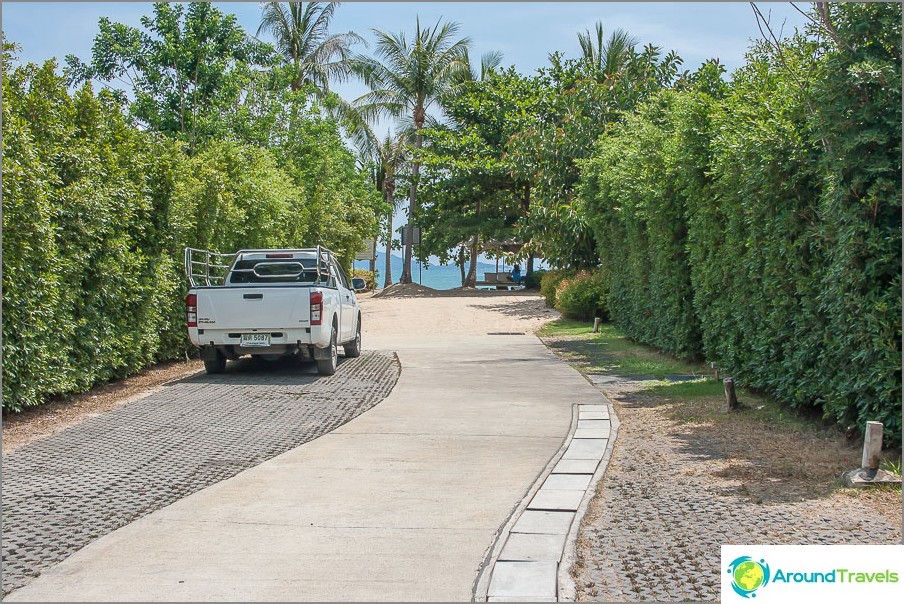 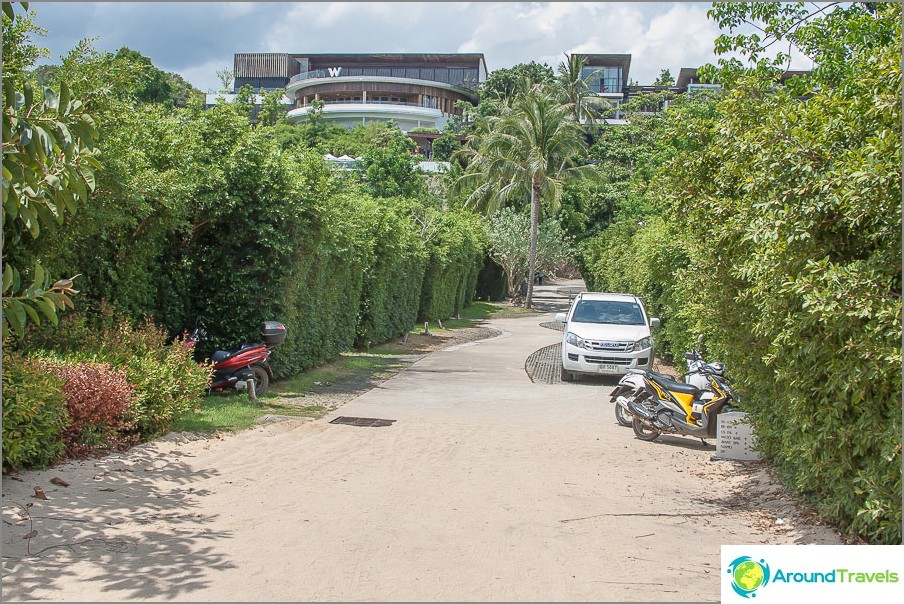