Bo Phut Beach on the north side of Koh Samui is a mixture of family and beautiful Maenama and lively, crowded, noisy Chaweng. Three kilometers of gently curving beach is located between the W-Retreat Koh Samui in the west and an uninhabited headland in the east, at the base of which a bar is hidden. «Orgazmic».

In the middle of Bo Phut is the Fisherman Village - Fisherman's Village, which is both a fisherman's pier, a local landmark, a night market and Bo Phut Walking Street. The entire beach can be visually divided into two halves: west from W-Retreat Koh Samui to Fisherman and east, from Fisherman to Orgasmik. The western part is more lively, with a lot of hotels along the coastline.

The eastern part is spoiled by the mouth of the stinking river and shallow water. The sand on the beach is fine, light yellow, lighter than on Maenam. In shallow water, the sand turns red, fragments of coral and a scattering of stones are added. Cleanliness is maintained in the western part, as there is a continuous row of hotels along the coast, and in the east, no one is involved in the beach..

A lot of debris comes across, both natural and human. Especially frustrating are the blue spillway pipes that stick out from under the houses of Fisherman Village and in places poison the water (I hope it's water) right on the sand.

The beach is very popular, and you don't always feel comfortable here during peak seasons. It happens that people lie at arm's length from you. In the west, shallow waters do their job, people come to sit on the shore or dine in restaurants overlooking the sea. In case anyone is interested in reading about other places, I have a short overview of all the beaches of Koh Samui, will help you decide on the choice of the beach.

There are not many deep beaches on Koh Samui. Bo Phut has deep water, which is why it is popular with people who do not want to get into the crowd. Chaweng, but also excessive calmness Maenama also not satisfied.

Bo Phut, in its western part, does not suffer from the ebb tide, here you can always swim and sunbathe in a human way. The depth of up to two meters becomes already 10-15 m from the coast. The eastern part of Bo Bhut with low tides becomes unsightly, somewhat reminiscent of Tong Plu, which is also located on the north coast of Koh Samui.

The entire western part of Bo Phut is replete with beach equipment. Sun loungers, beach umbrellas, tables - there is everything. Not everywhere these things are offered to be rented, but no one forbids taking a walk to search. The sources of natural shade in Bo Phut are mainly palm trees, which grow in abundance along the coast. Not Maenam, with its palm groves, but still a good shelter from the sun for kids. 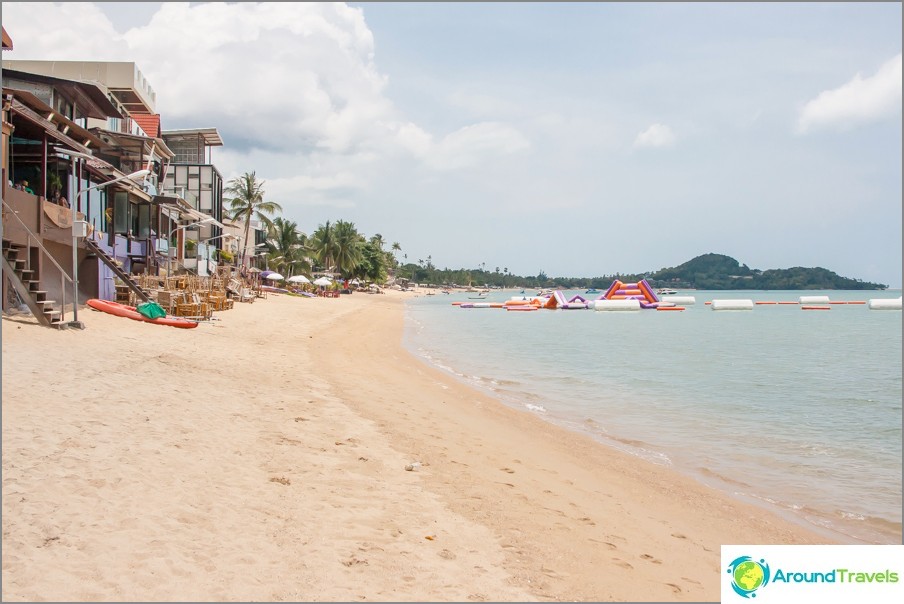 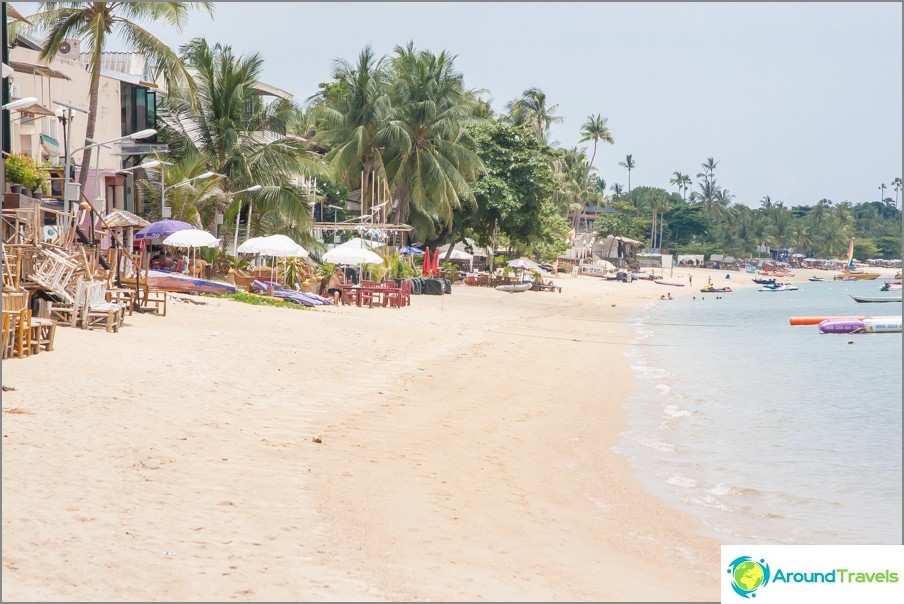 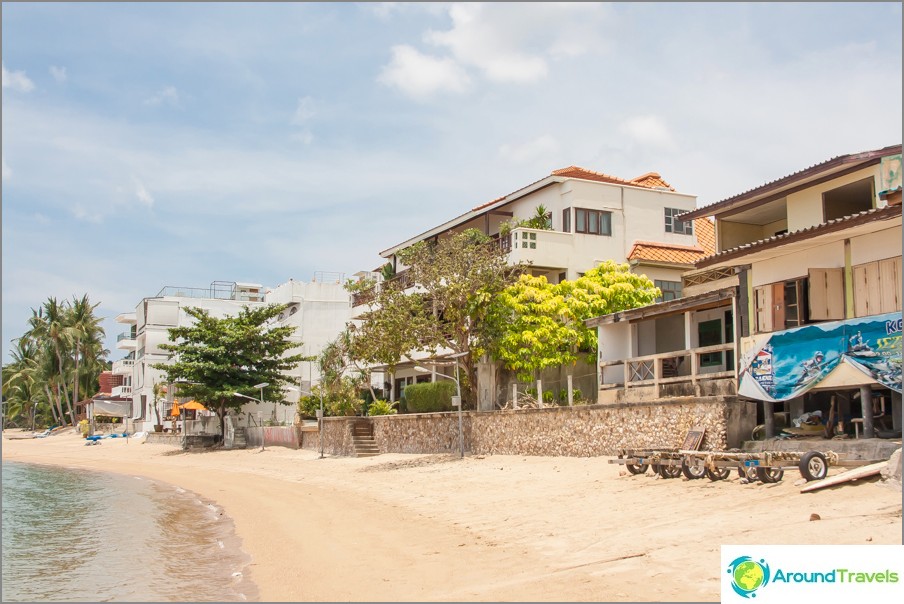 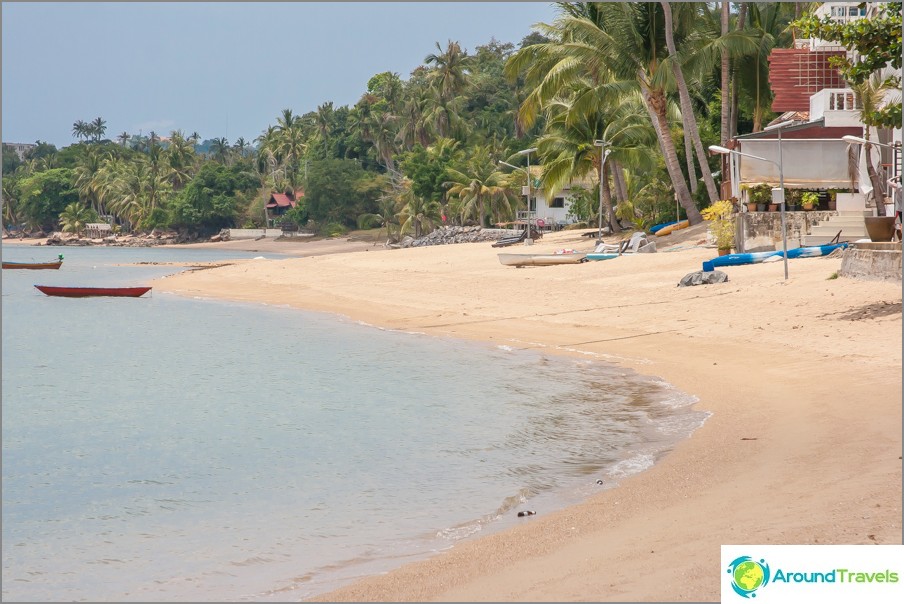 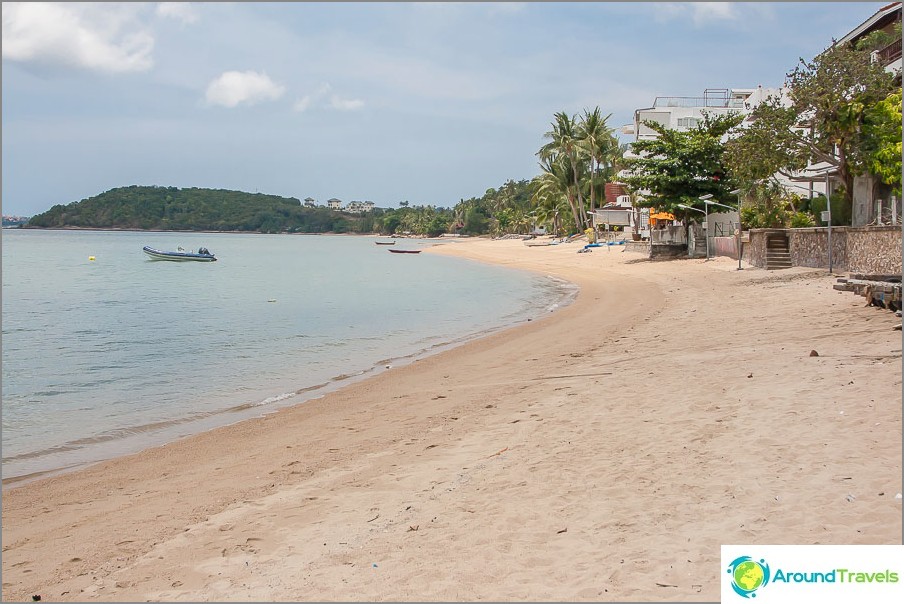 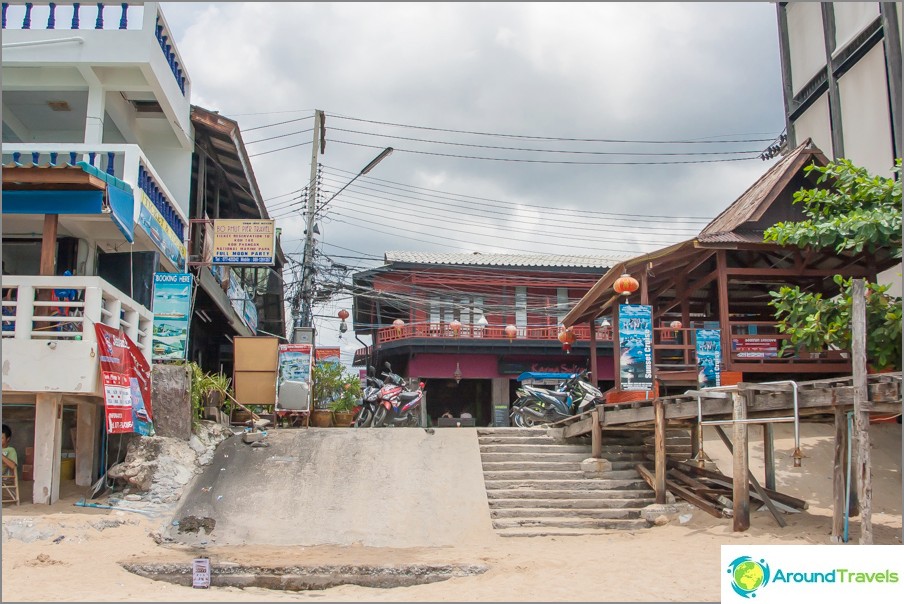 As on Maename, life on Bo Phut dies down with the onset of darkness. Most of the establishments and shops are closed, only cafes, restaurants and makers are open. Those who like to walk before going to bed and chat with other fans of the evening exercise are helped out by the proximity of Fisherman Village..

In the evening he does not sleep, offering souvenirs, clothes, a huge selection of international cuisine to those who walk. Fisherman has one of the best Indian restaurants, and on Fridays there are Night Fairs that draw crowds..

On the western part of the beach, there are mainly hotel entertainment, beach volleyball nets, kayaks, jet skis. A huge inflatable aqua attraction with slides and floating islands is organized for children. The exact same is on Chaweng.

In the east, there are free-standing bars; on the shore, there are open-type restaurants. There is only one attraction near Bo Phut - the Buddhist temple Bo Phut (Wat Bo Phuttharam), which was recently built large figure of a monk. Also in the courtyard of the temple they make a traveling weekly fair..

Sometime in 2015, The Warf shopping center opened on Bo Pute. On a large territory adjacent to the sea, a whole complex of one-two-storey buildings was built, where souvenir shops, cafes and restaurants are located. In the year 17-18, more than half of the premises in the depths of the shopping center were already empty due to the greed of the owner, who set space prices for rent. 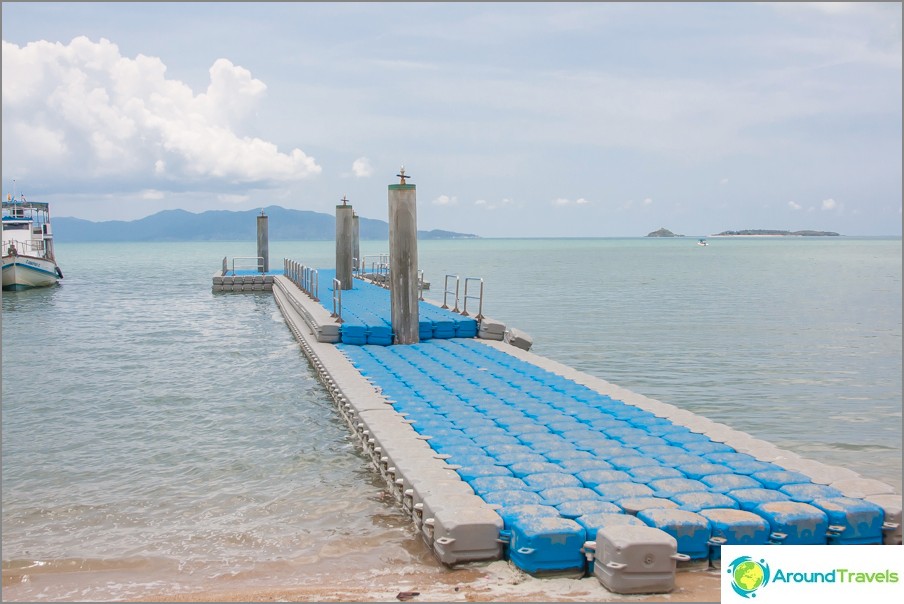 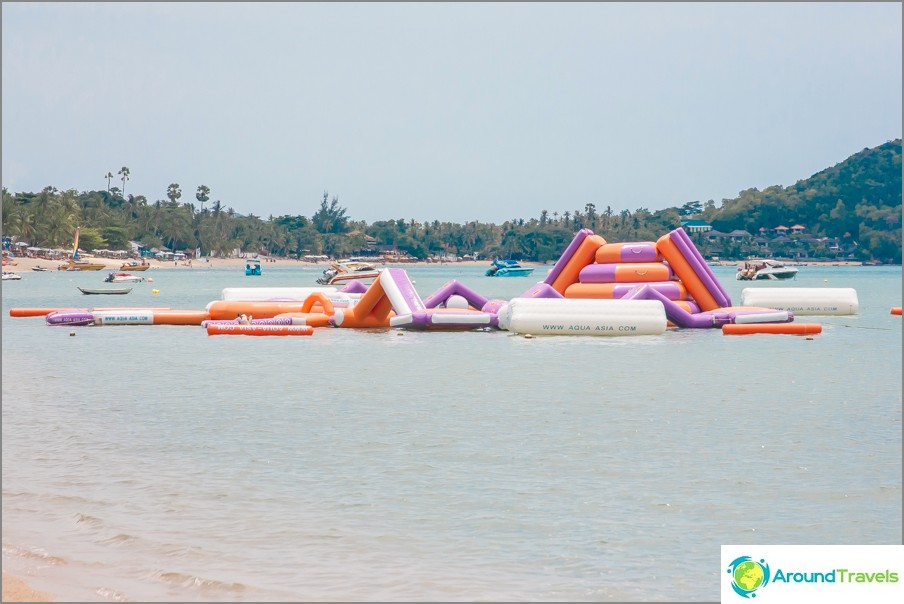 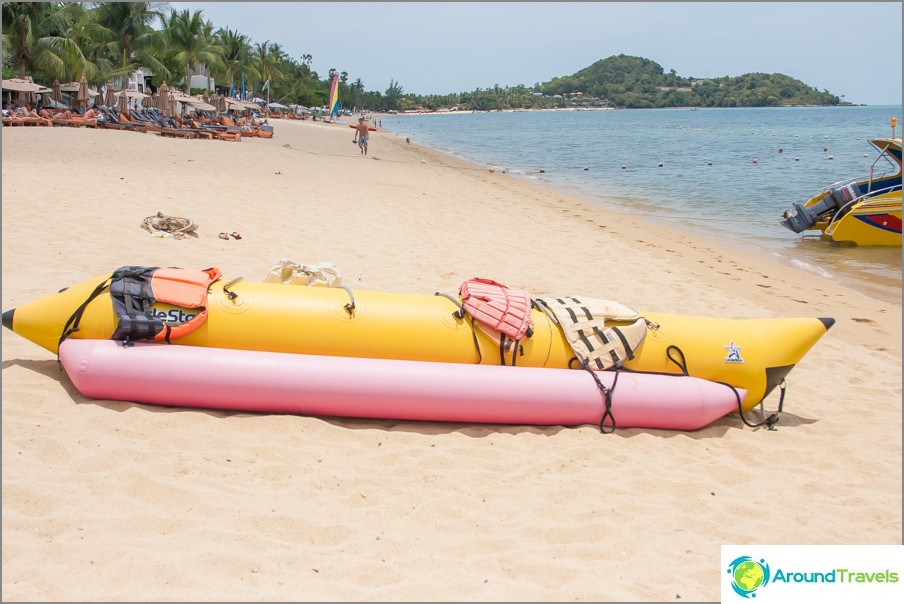 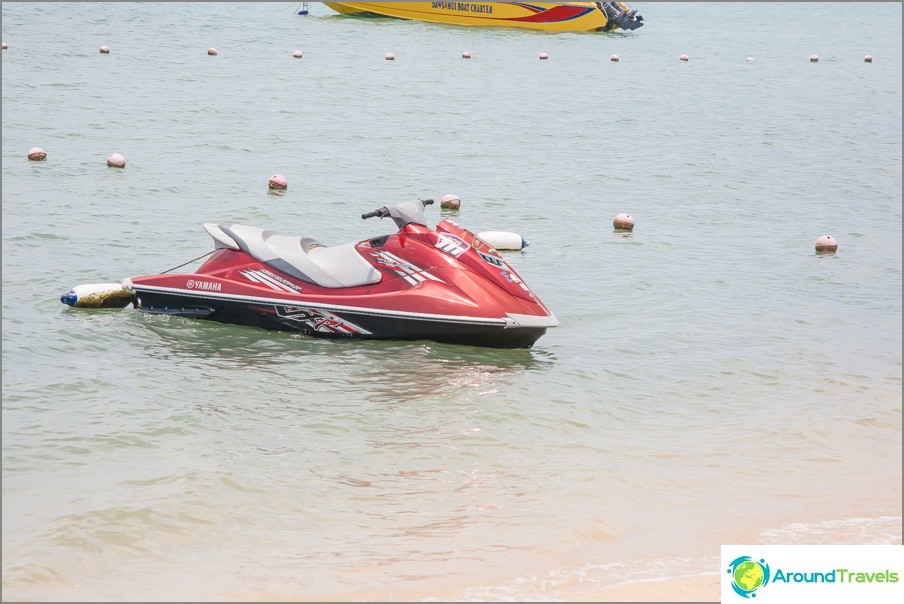 More than two dozen hotels are concentrated on Bo Phut beach, which fit between the Ring Road and the sea. There are wastelands, but in general - Bo Phut is one of the most built-up beaches on the island. If, for some reason, a hotel vacation is not attractive to you, then you can always cross the road and start looking beyond the ring.

The choice of housing is huge, houses are up to one and a half kilometers inland. However, it should be borne in mind that houses closer to large shops and centers are more expensive..

Nice small hotels can be found right on the beach, for example, the Samui Palm Beach Resort & Hotel or the more roomy Ibis Samui Bophut with a laconic interior design..

The small cozy The Lodge is located directly on the beach, as well as Bungalows at Bophut - very simple wooden bungalows.

The beach is too long to create a problem of water access. The only thing that needs to be noted is that the western part is full of hotels. You can go through their territory, no one will shoot, but usually communication with the staff takes time and mood, because strangers from the street are not at all welcome.

It is better to drive to the only traffic light on Bo Phut, turn left and enter the Fisherman territory. Better yet, so as not to hustle with pedestrians on a narrow street, drive to the second entrance to the village. There, leave the bike in a large parking lot and go to the beach, it is the same everywhere in the west. At the same time, see the piers of Bo Phut and walk through the Fishing Village itself. 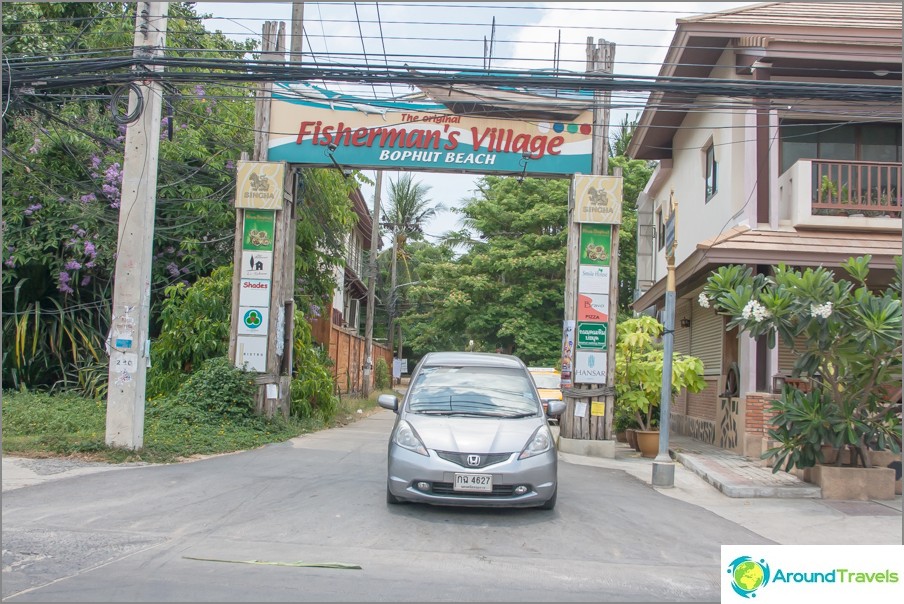