Maenam Beach - a family corner of the island

Mae Nam beach our compatriots write differently: Mae Nam, Mae Nam, Mae Nam, Mae Nam, but most people pronounce this word equally wrong - «maenam», but I should say «menam». The toponym of the beach was assigned to it after the name of the eponymous village of Ban Mae Nam, which is located along the ring road on this section of Koh Samui..

If you do not find fault with the differences in the grain size of the sand and the presence of vegetation on the shore - the beach is equally good along its entire length. Only in the east it becomes almost twice as wide as everywhere else. On Maenam, as on Lamae - the sand is very loose and surprisingly similar to sugar, only golden yellow in color. The sand is soft, lies in small dunes, and you just can't run barefoot on it, because your feet are drowning in it ankle-deep.

The beach is clean almost everywhere, with the exception of three wild areas:

On days when the sea is stormy, you can find a small amount of marine debris on the beach, but the next morning after the Thai holiday Loi Krathong, it is better not to go out on the sand without shoes.

The fact is that one of the events of the holiday is the massive launch of home-made boats with candles, incense and food into the water. And boats are made from palm leaves, bamboo and pins, which fall apart very quickly when they find themselves in the open sea. By morning the whole coast Bang Raka, Bo Puta and Mae Nama is mined with leaves with needles sticking out in them.

Mae Nam is a popular beach. From May to December, it is as deserted as all the beaches of Koh Samui during the low season, but from December to May there are really a lot of people here. People, of course, do not sit on each other's heads, but it will be possible to retire comfortably only in wild areas..

There are three mouths of stinking rivers on Maenam, so when choosing a place to live, you should definitely walk to the sea and make sure that you are not lucky enough to get a neighborhood with one of them..

Maenam is one of the few beaches whose quality does not change with the onset of low tide. This is one of the reasons for its popularity. The sea goes five to seven meters, leaving people with leveled sand under the palm trees. The slope of the coast here is quite steep, the depth to the chest will already be five meters from the water's edge.

There are no stones and coral debris on Mae Nam, the entrance to the water is clean and comfortable, even, without surprises. Waves happen in the rainy season, quite strong, serious. With a good wind, the sea gets right up to the roots of the first row of palms, gradually washing them away.

It is better for children to purchase inflatable armbands in advance and do not let them go far from themselves. Especially in the evening, when sea creatures begin to swim up to the shore.

From the east of Maenam all the way to Lompraya pier, the shore is a palm grove with plenty of natural shade. This is another reason for the high popularity of Maenam among vacationers with children. It's a big deal when the kids have a lot of space for activity, and not a sad patch under an umbrella.

There are sun loungers in front of the hotels, but they are only for their own, but on Buddha Beach there is a bar, near which there are a dozen bamboo pavilions. In this place you can sunbathe and order a cocktail. In general, I recommend this place, because the atmosphere of the old island is impressive there and there are almost no compatriots. 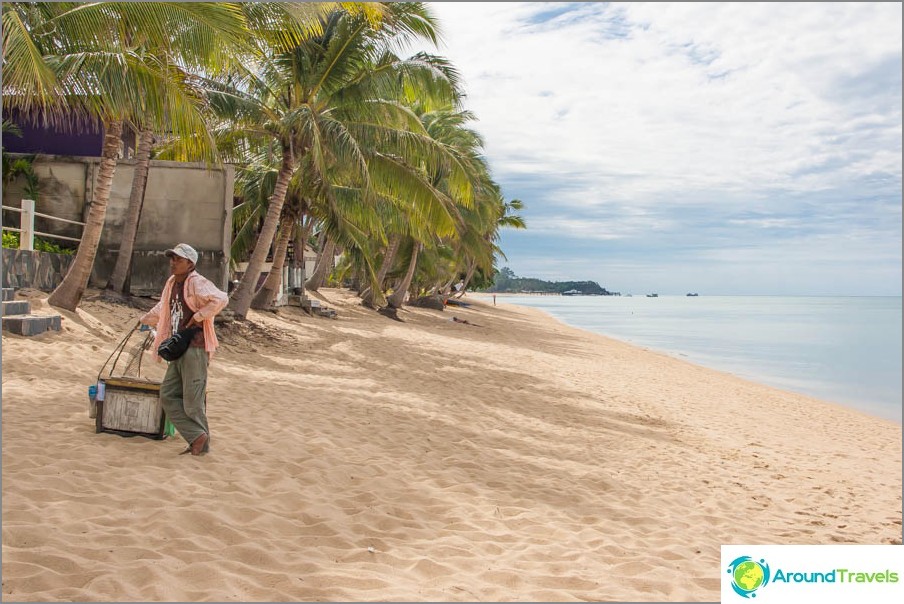 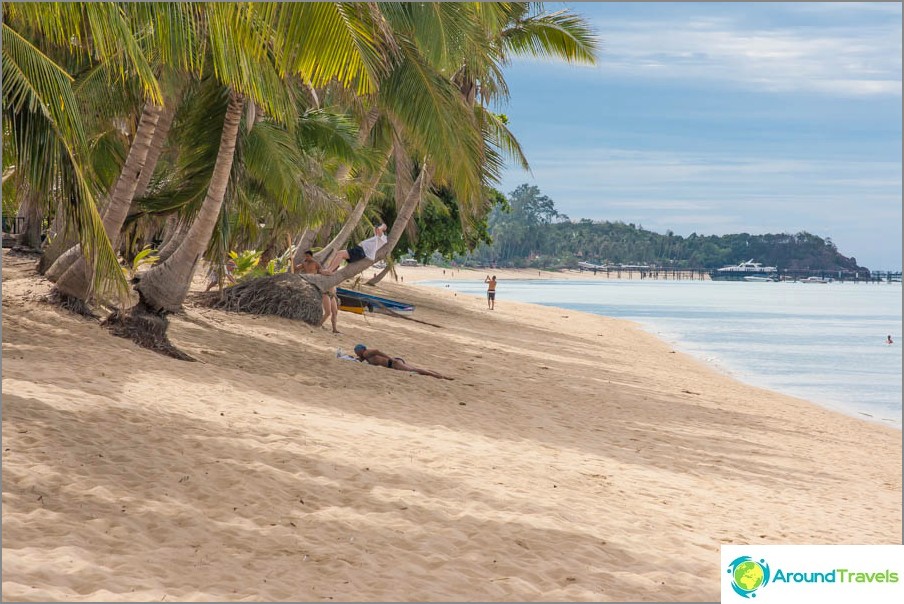 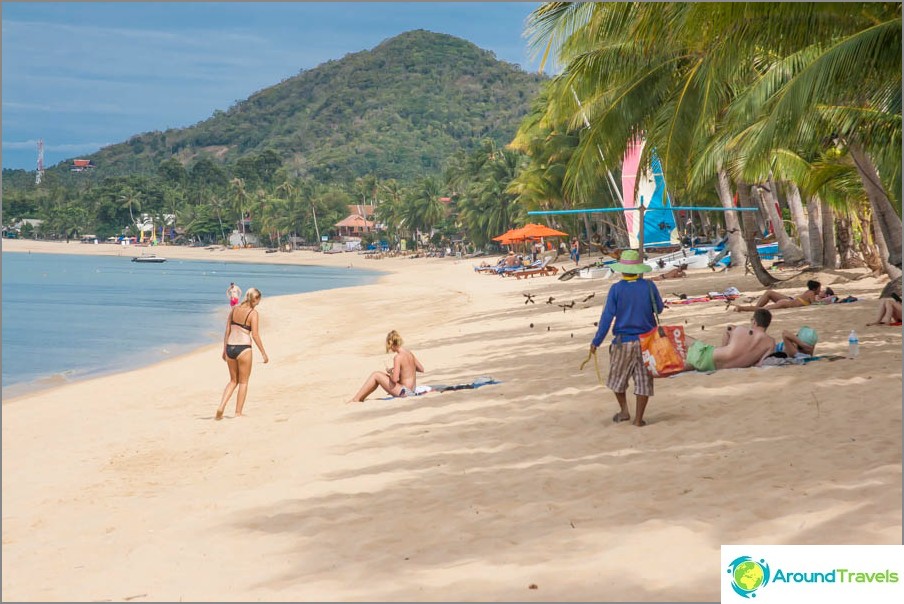 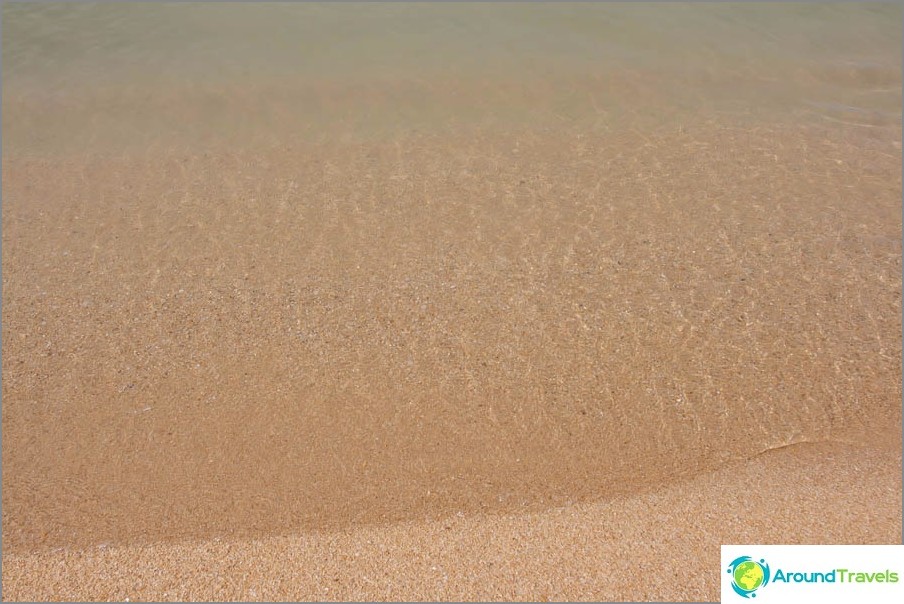 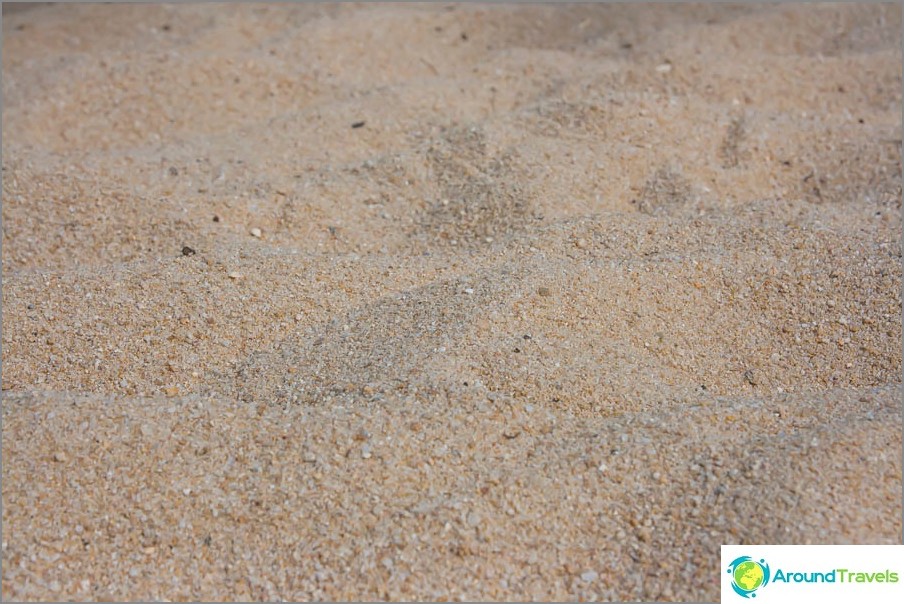 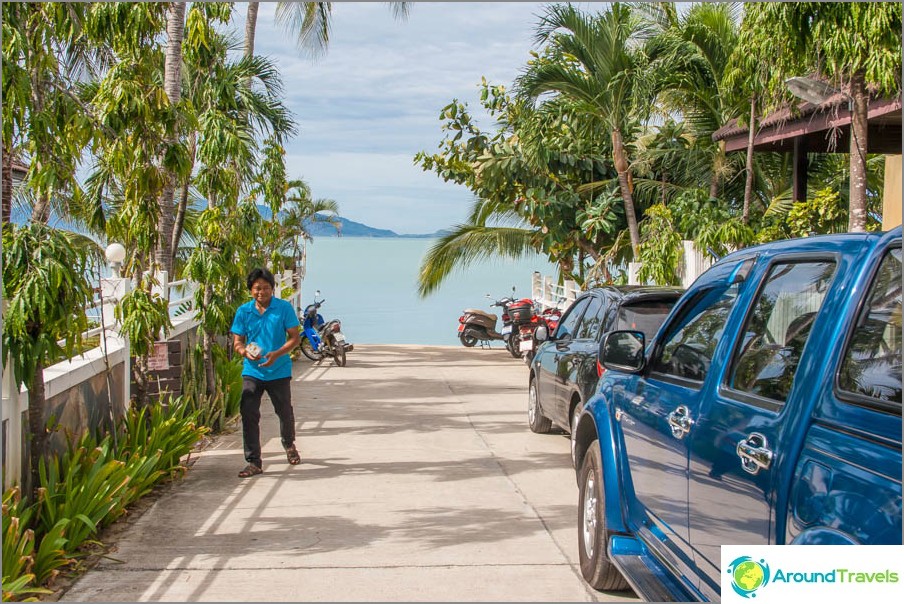 Unlike the eternally sleepy one Chaweng, the main life on Maenam dies down with the onset of darkness. Most of the establishments and shops are closed, only cafes, restaurants and makers are working. You can't just take it and go out for a walk at night on Mae Nam. Dark and boring.

But here you can find all the amenities and services of Koh Samui. Banks, ATMs, laundries, equipment rentals, auto and motorcycle services, gas stations, markets, night markets, cafes, restaurants, water dispensers, water pumping stations, taishops and large household stores, furniture and leather workshops - Maenam has it all. And this also makes him attractive to many..

There are free-standing bars on the beach itself, but they are mainly located on the territory of hotels. There is a rental of kayaks and jet skis, but not in the same quantities as on Chaweng and Lamai, probably due to the family nature of the beach.

The first line is occupied by large hotels and expensive resorts. The most famous of the hotels is the W-Retreat Koh Samui with its fenced beach and beach infrastructure. It is in the east, on the border between Bo Putom and Maenam.

In the immediate vicinity of the sea, you can also find simple houses and bungalows: Shangrilah Bungalow with clean green territory and small huts of Palm Point Village. For those who like big hotels, Thiptara Resort is suitable: a pleasant clean hotel with a green well-groomed territory.

There are tons of houses for rent along the entire beach, both inside the Ring and beyond. For all tastes, from concrete rooms at 3,000 baht per month to luxurious villas on the mountainside.

If you want to book a hotel here in advance or look for accommodation on other beaches, I have selection of hotels on Koh Samui with a good rating and reviews. Also hotels on Mae Nam beach can be viewed on the website Roomguru, it is a convenient service for finding hotels in different booking systems.

Access to Mae Nam beach is not limited, you can turn to any street leading to the sea. The boundaries of the Maenam district are considered to be the Buddhist gate, behind which the road to Lompraya pier and the Family Mart mini-market (on the left side of the village) begins. And Family Mart on the main road, near which there is a banner with the name of Theeparatpittaya School, under which the road to W-Retreat Samui begins..