Mae Haad Beach, which is also sometimes called Mae Haad, is a fairly well-known place in Phangan. It is located on the northwestern edge of the island, where just a hundred meters from the coast there is a satellite island Ko Ma, where you can easily walk along a sand spit..

This place is called the visiting card of Phangan and it is easy to recognize it from those photographs, where between two green shores stretches a snow-white sand spit with an azure sea and walking people. Something similar, but much larger in scale, you will find on the neighboring island of Ko Nangyuang, not far from Ko Tao.

If we simplify it very much, then in shape it resembles a three-pointed Mercedes star. For ease of understanding, I would suggest that you mentally stand in the place where all its three parts are connected - at the beginning of the sand spit.

Directly in front of you there will be a two-hundred-meter strip of sand, which is exposed only at low tide and is quite suitable for walking and beach recreation. The spit stretches from south to north and offers an excellent view in any direction, except for the north - where the horizon overlaps the island of Ko Ma.

The disadvantage of the spit is that it catastrophically depends on the water level and the season - during storms it is severely broken by waves.

To your left and behind you will be the longest coastal part of Mae Khad - 600 meters of pleasant yellowish sand and a wide beach. This part of Phangan faces west and offers a beautiful view of the clear sea horizon interspersed with islands on the left.

Approximately in the middle there is the mouth of a seasonal river - after the end of the monsoons, it dries up, leaving behind a pair of greenish dams and a ditch in the middle of the beach, but the Thais, washed out by water, quickly fall asleep, restoring the beach until the next rainy season.

To the right of the center of Mae Had, about two hundred meters of beach stretches a little more terrifying in appearance - here the coast is in places protected from erosion with the help of concrete rings. And the sea is smaller here, which, however, does not prevent guests of local resorts from enjoying a beach holiday..

This part of the beach faces north and the entire horizon obstructs the Ko Ma island, and you won't be able to see the sunsets without leaving the houses.

The width of the beach varies from 5 to 25 meters, and thanks to the classic Pangan shallow water, all parts of Mae Khada are heavily flooded at high tide. For example, when I was on the beach at high tide, the sandbar was not visible at all..

Accordingly, with high water to Ko Ma, you will no longer walk carelessly, but wade deep down to your chest. It is because of this that I did not get to Ko Ma, but as far as I understand, there is basically nothing to see there, only a small beach and a few bungalows.

Mae Haad is very beautiful at low tide, and the tide eats up almost the entire beach. Due to the depth of the sea, as a rule, there are no high waves during the calm season, which makes it a great place for families with children. The sand is light yellow, fine, with a large number of pebbles and shells, often larger cobblestones, both on the shore and under water.

The entrance to the sea is comfortable, gentle, and it will be possible to hang in the water at full height only twenty meters from the shore, provided that the tide is now.

Mae Haad is an exceptionally beautiful beach, and there are a lot of trees on the shore, so there is shade, but on the western half of the beach it is only until lunchtime. But on the site where the exit to the sand spit, a rather dense grove grows on the shore and there is a shadow at any time of the day, although most of the space there is occupied by cafeterias and restaurants.

On the right half of Mae Khada (northern), there are no problems with shadow throughout the day, this nook has its advantages.. 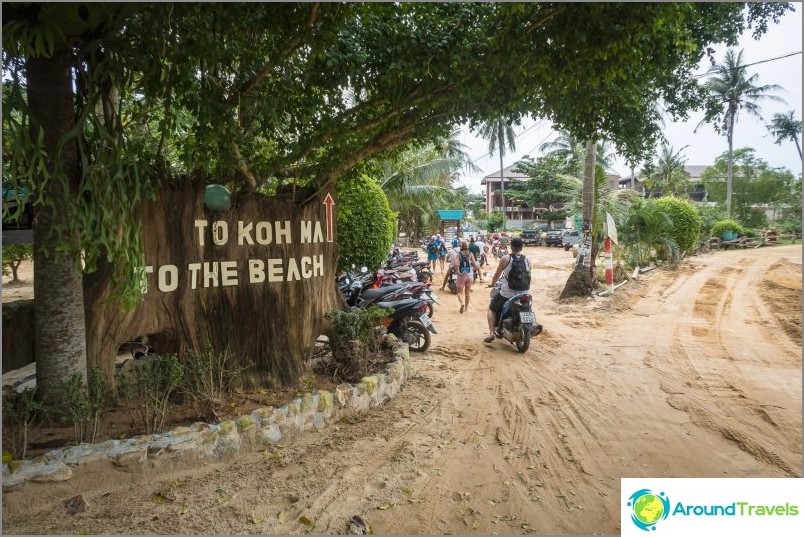 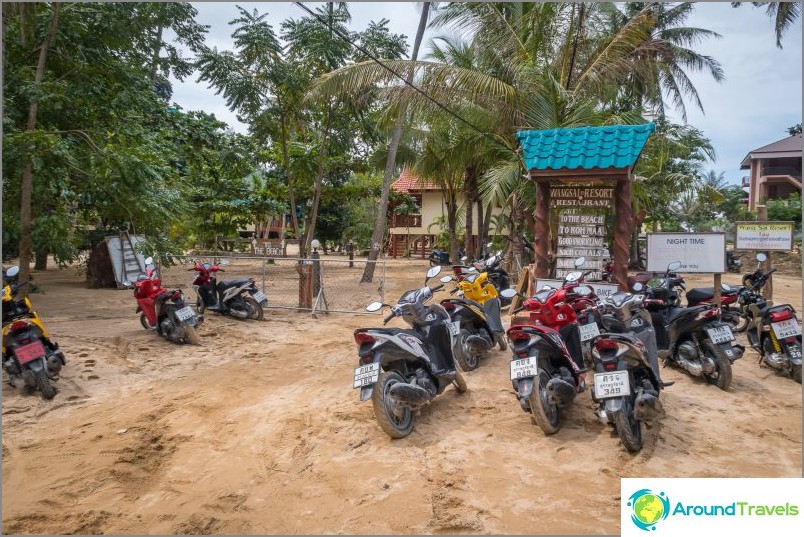 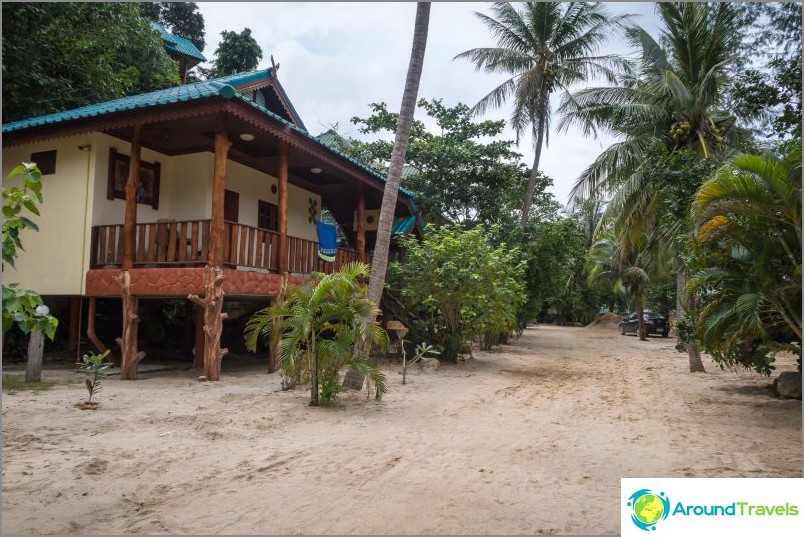 The path to the beach passes through the territory of the Wang Sai resort, bike in the parking lot 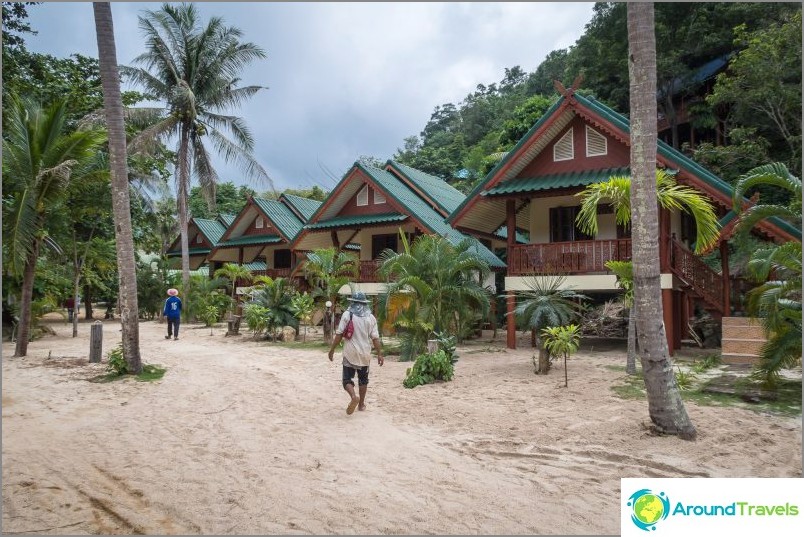 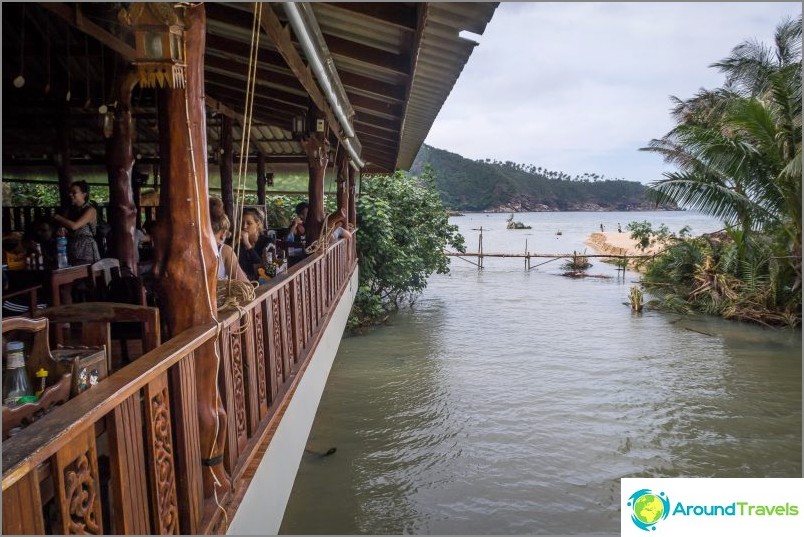 To get to the bridge, you need to go through the restaurant

Behind the bridge - Mae Haad beach 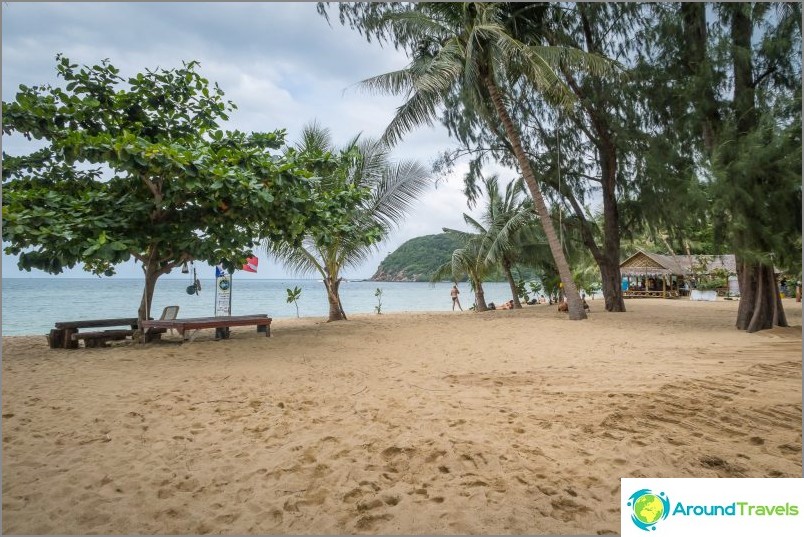 The bridge leads to the western, long part of the Mae Khada 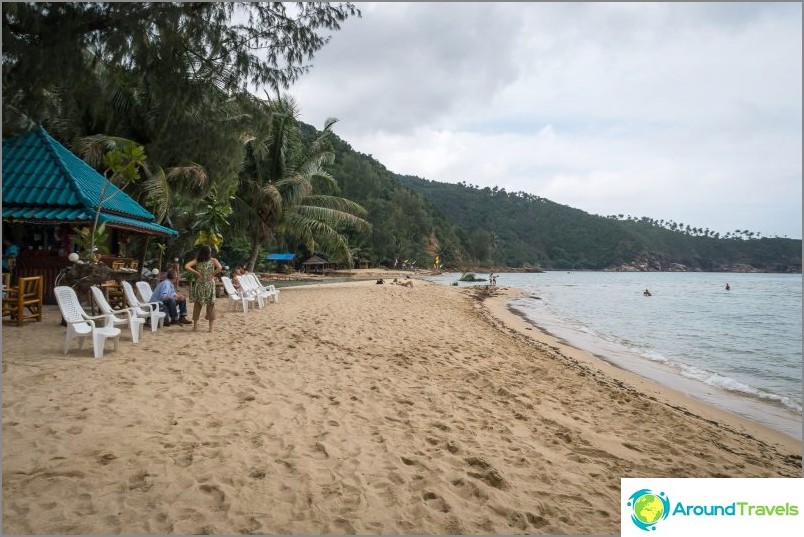 This is a view to the left of the bridge with a blurry beach and a river in front. 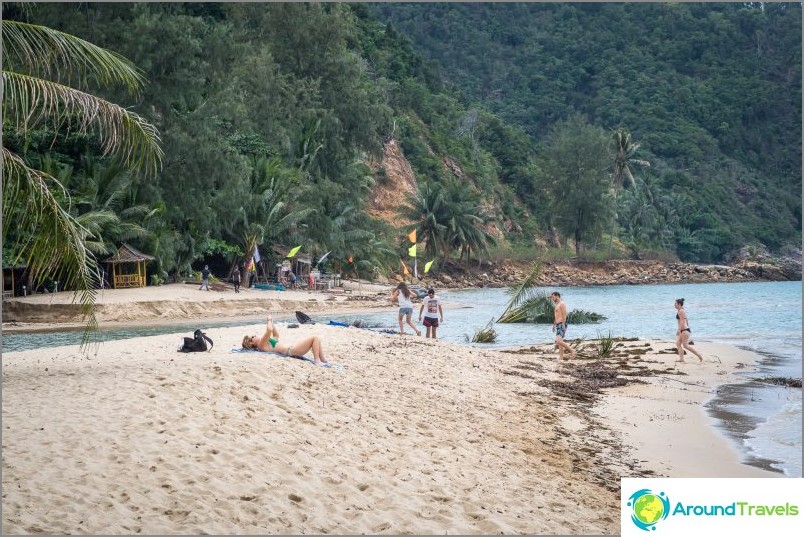 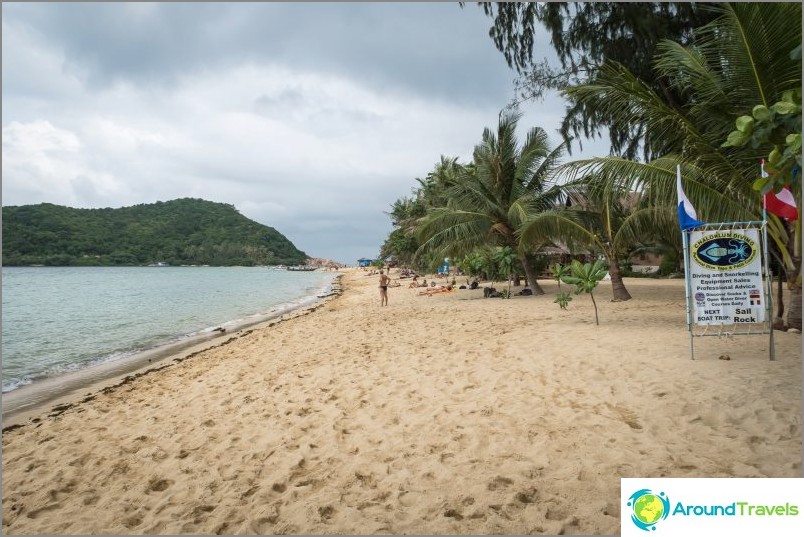 And this is to the right, there you can see the edge of the island of Ko Ma 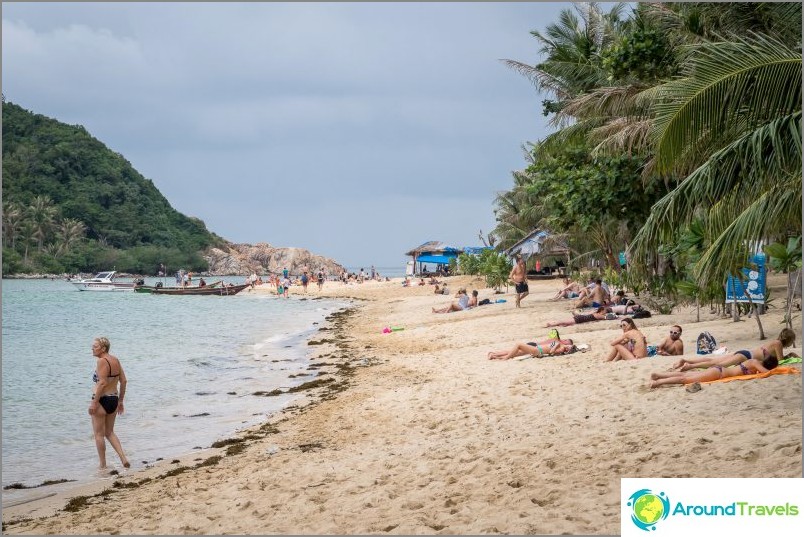 The rainy season is unpleasant because the sea constantly throws tons of some kind of garbage ashore. 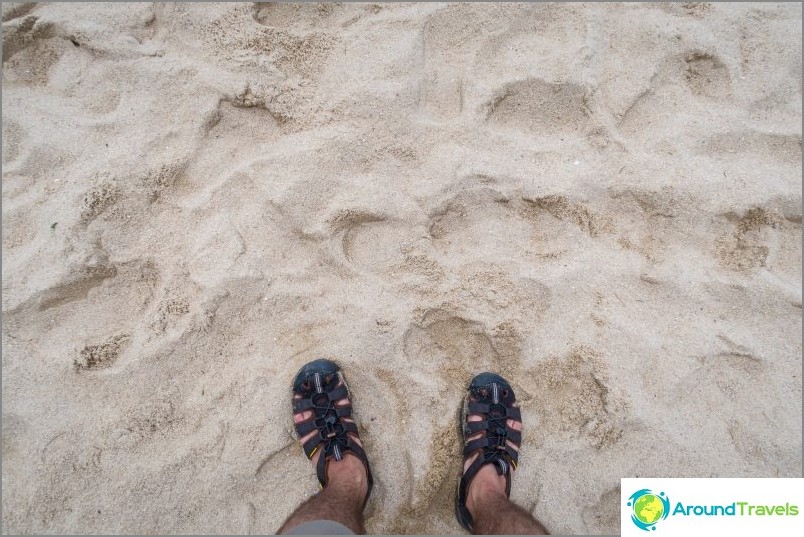 The central part near the island of Ko Ma 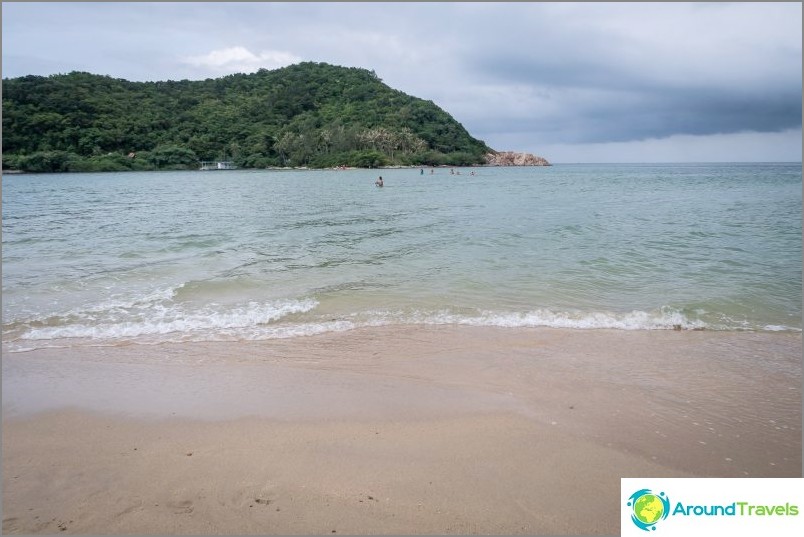 There should have been a sandbar to the island opposite 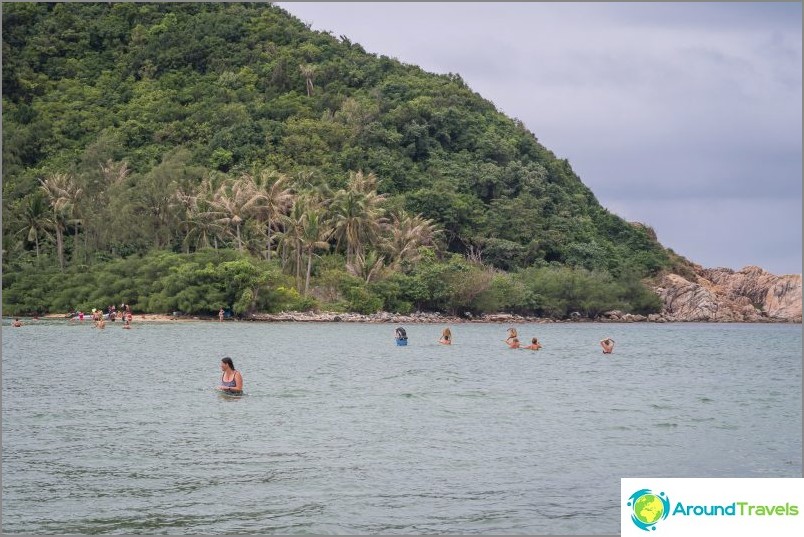 It exists, but at what depth - look at people. 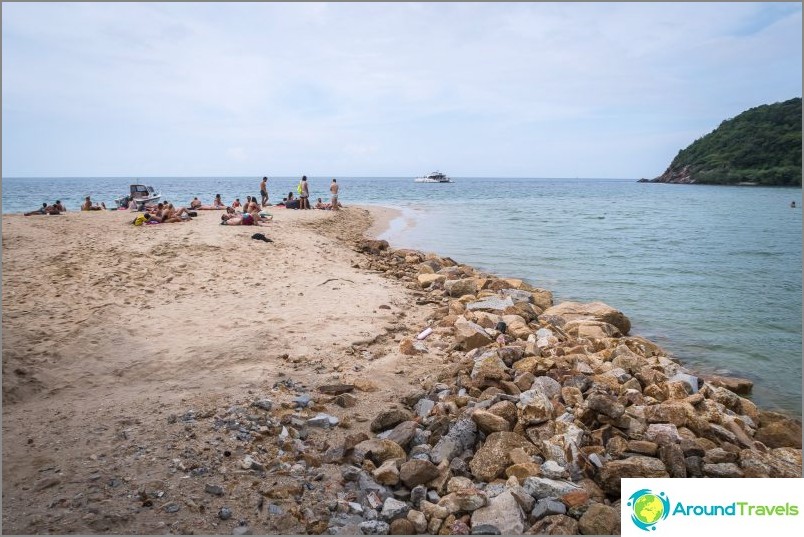 Right side near Maehaad Bay Resort 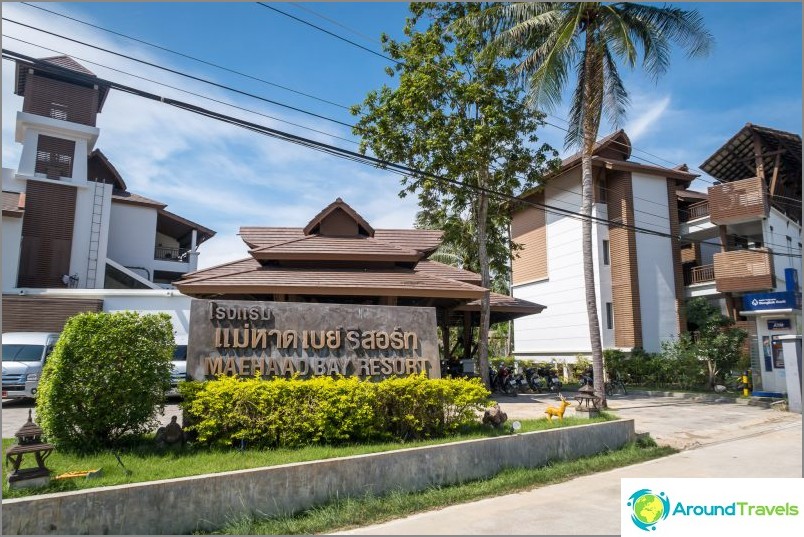 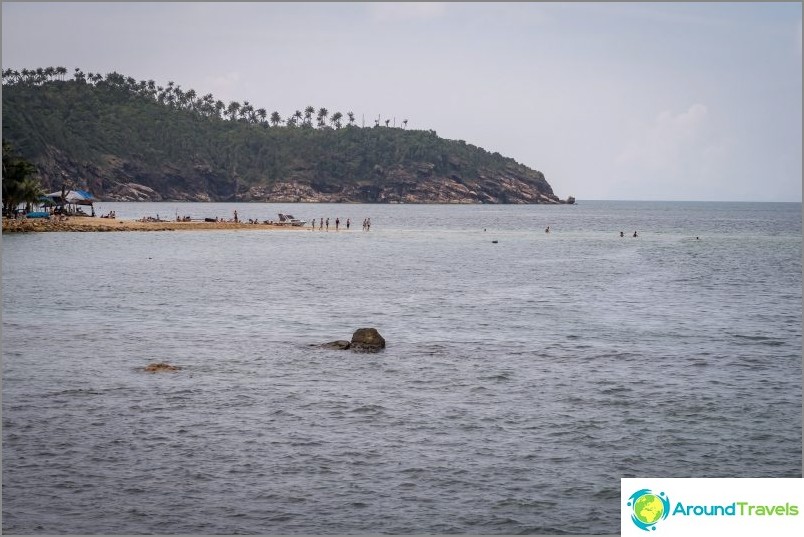 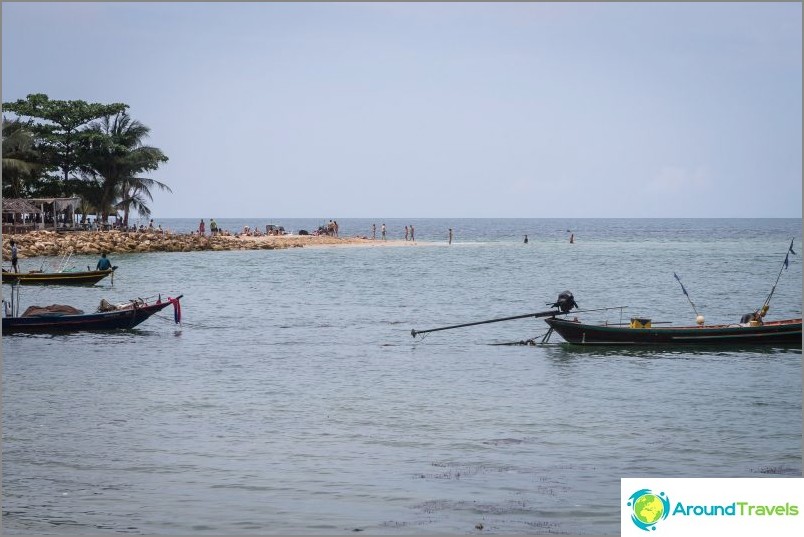 And this is again the suffering of those who came to the sand spit at the peak of the tide.. 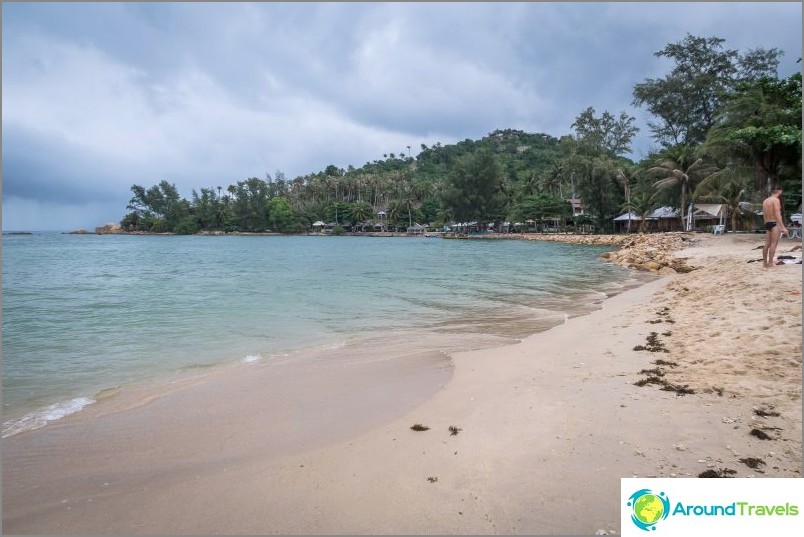 And this is the right side of Mae Khada, where there is no beach as such, only a rocky, fortified coast 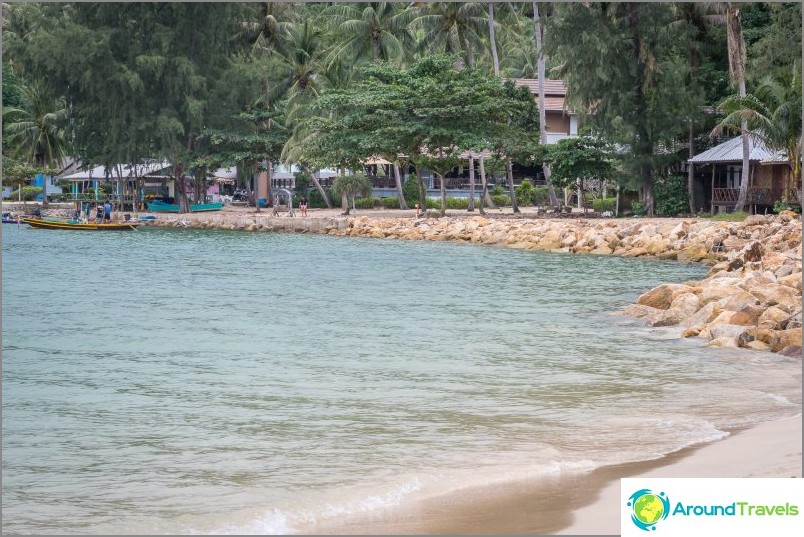 There is no sand here from the word «generally». Now I'll show you closer. 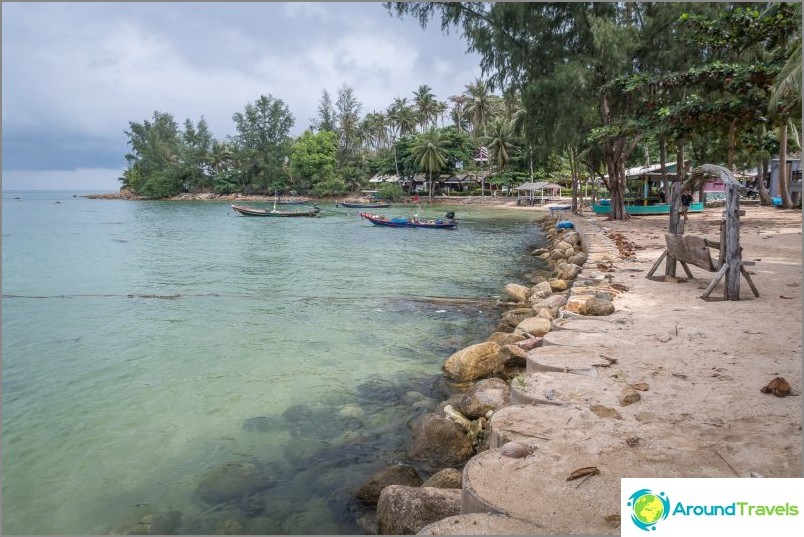 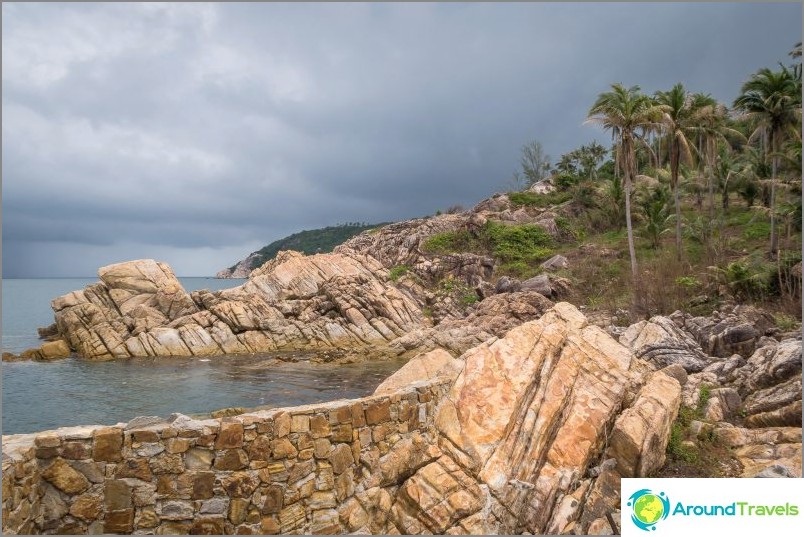 There is nothing further to the right, only rocks 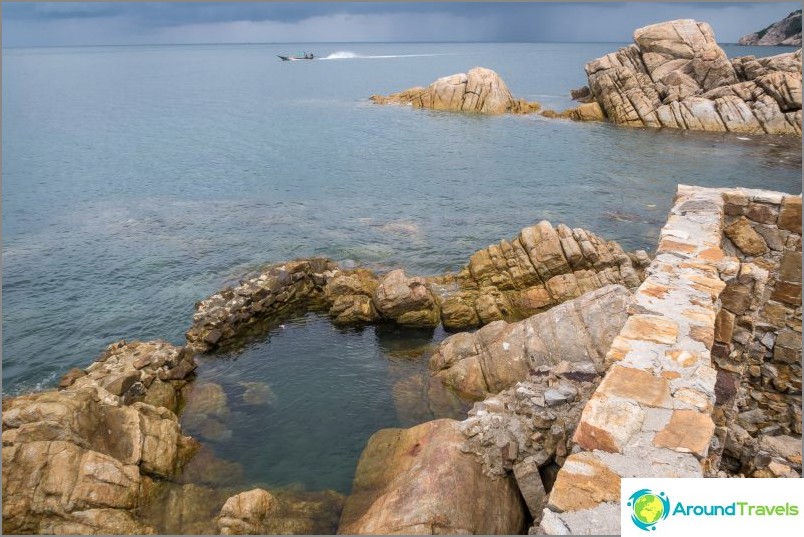 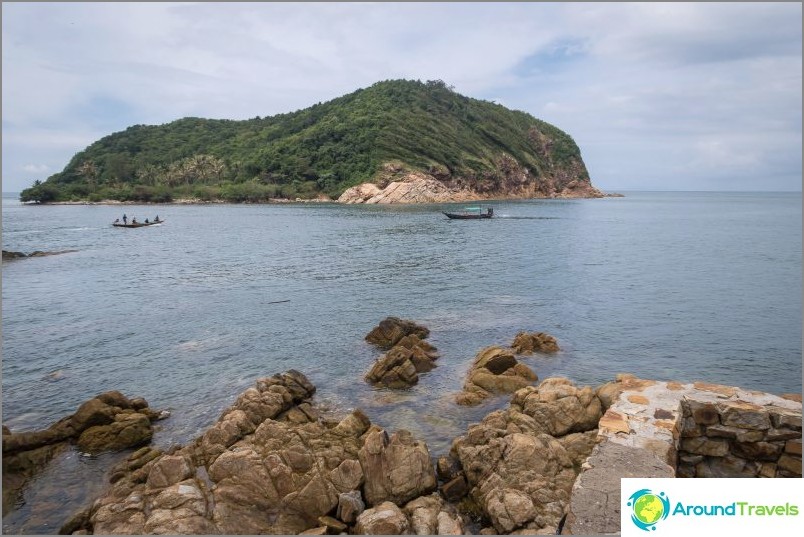 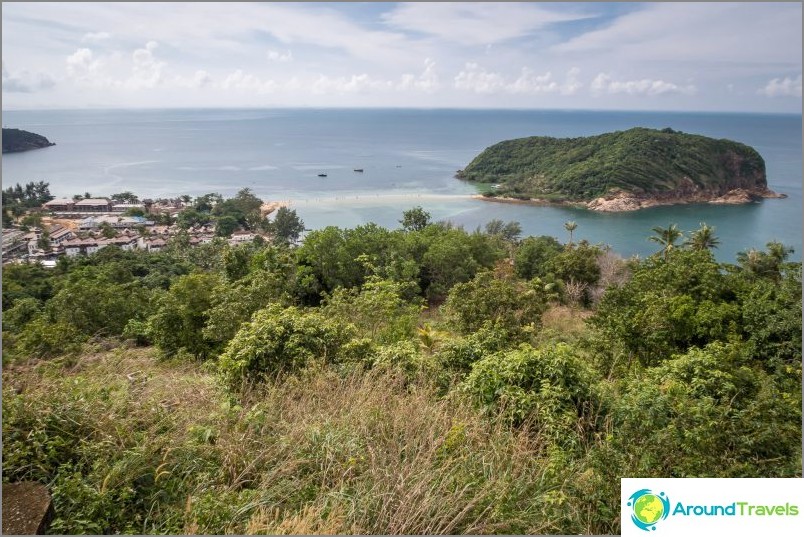 View of the sandbar from viewpoint 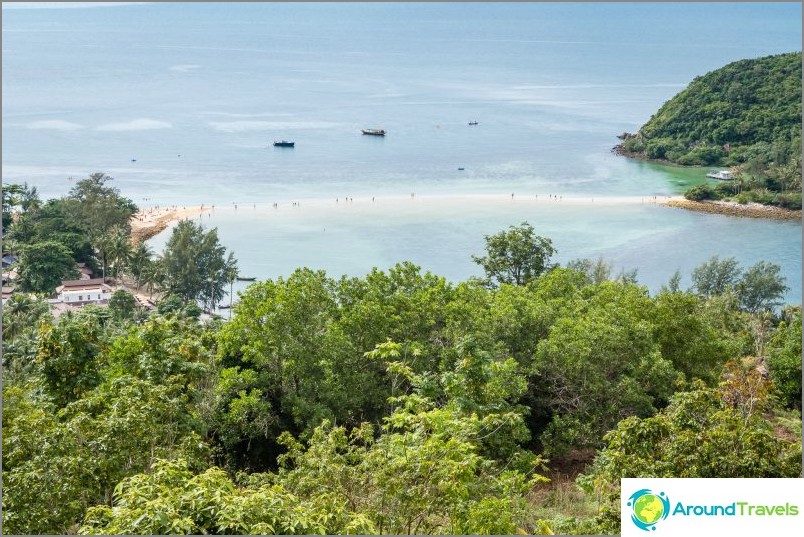 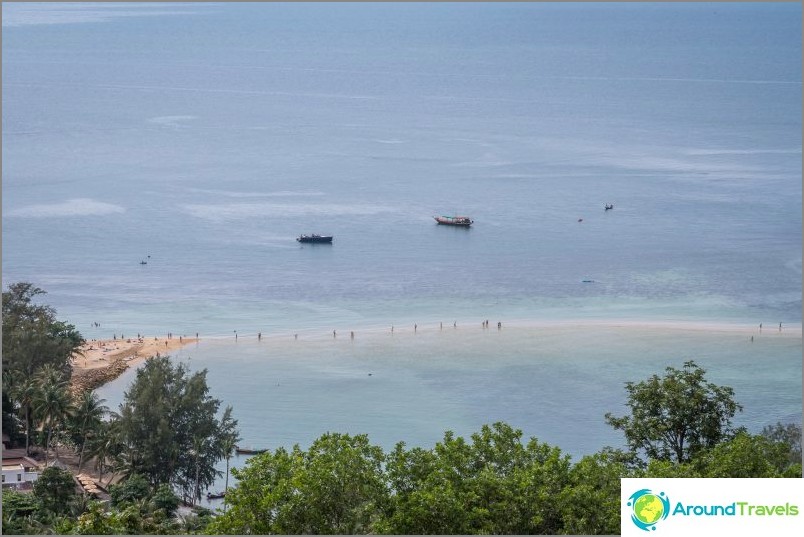 There are two organized parking lots on Ma Hada, one closer to the right edge of the beach, the other closer to the left. The right one is covered with asphalt, there the bikes stand in rows and the parking lot reaches almost to the shore, and the one to the left is a parking lot on the sand. On the right side of Mae Hud, in the bay of the same name, boat parking is organized, and there are also a couple of resorts on the shore, if you want to stay here, you should go there..

Just a reminder - you will observe stones and boats on the shore, a sad landscape. That is why all the people hang out near the place where the spit and the western part of Mae Khada begin. The most serious concentration of people is right here.

The place as a whole is very pleasant, the area is small, there are only a few hotels right next to the beach, some small resorts, little infrastructure and it all comes down to services for tourists - these are cafes of resorts and massage salo. Sala are Thai gazebos in case you don't already know. I did not notice shops within a radius of 200 meters, neither chain nor Thai private shops.

True, there is a significant disadvantage - global construction in 2017. I don’t know when it’s over, but there is still a lot of dirt and noise from it. But, to be honest, even without a construction site, I would have thought ten times whether it is worth settling in this area, wilderness.

From attractions: waterfall Wang sai waterfall and a park recreation area next to it, and also Bar «360». The waterfall and seating area are deep in the island, while Bar 360 is the roof of an abandoned hotel rumored to be owned by the police..

Previously, it was just a wild abandoned construction site and the adoration of abandoned lovers. And now everything is cultural here and a panoramic view of almost 360 degrees.

Next to Bar 360 on the same mountain is the popular hotel and restaurant Utopia Resort. The institution has a high rating, but the interior and exterior are tired. However, due to the specific restaurant, it constantly has an influx of people, despite the fact that all the latest reviews about it are no longer very.

You can think of it as a settlement option, but - a mountain, remember? It is located on a mountain, and if you live there, you will have to either get to the beach by bike so that you don't die back on the rise, or walk from a heart attack.. 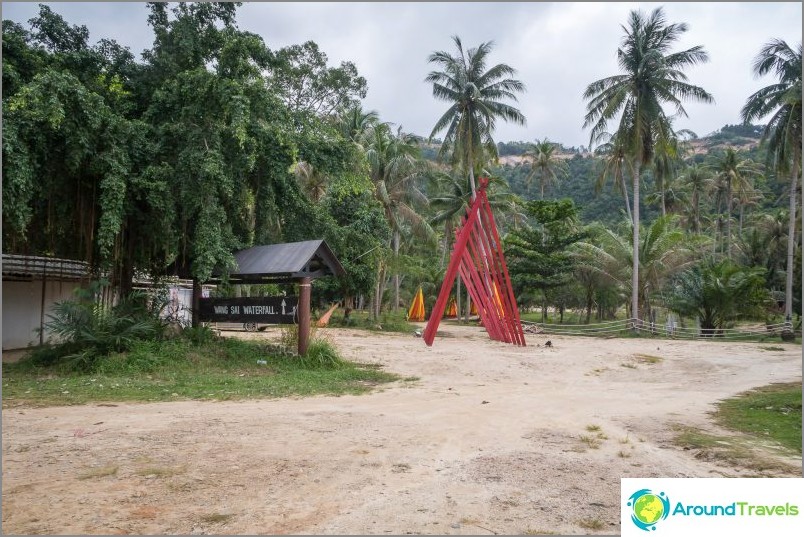 The resorts around are very different - there are wooden houses, large, and there are very simple ones. Plus construction sites. Previously, it was a quiet, calm place, but now a large-scale development has unfolded, perhaps there will soon be steep resorts, but for now, everything is in noise and dust. So I would definitely not stop here, all these rumbling excavators ... it's better to come, sunbathe and go back to a quiet place.

For a holiday stopover for a couple of weeks, I would recommend these two resorts - Mae Haad Beach View Resort and Mae Haad Bay Resort. The first is on the left side of the beach, the second is on the right. Given that all the beaches are within walking distance, there is no need to scrupulously disassemble the pros and cons of each.

Hotels near Mae Had>

To get to Wang Sai Resort, it is easy to find it, it is signed in large letters on the signs. There is a passage through this resort, or rather through a cafe belonging to the resort and a bridge. And if you do not strive for Wang Sai, but turn right a little earlier, you will almost get to a sand spit.

But it is more interesting across the bridge, although the administrator of the cafe constantly swears and forces you to take off your shoes so as not to clean up the sand after you.